Home  »  B Titles   »   Oh the Inhumanity of Inhumanity: Superior Spider-Man 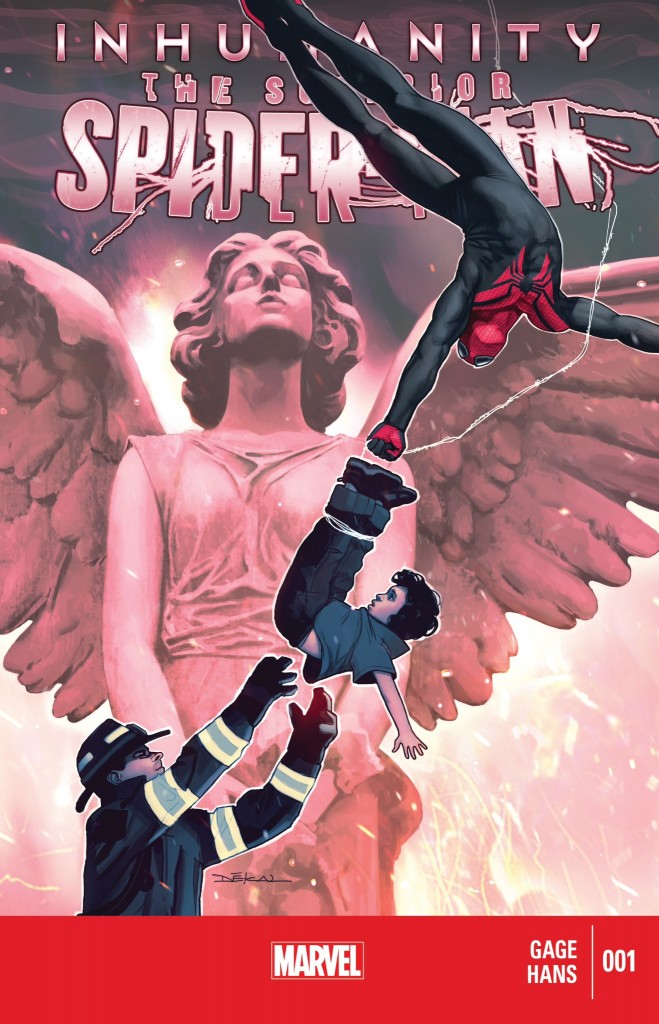 The internet is traditionally a hornet’s nest of negativity, especially as it pertains to comic books, so I make a point of always trying to be open-minded and positive when I write about a Spider-Man issue on this site. But there’s something about the Inhumanity: Superior Spider-Man one-shot that inspires such cynicism and negativity from me, I apologize in advance if the vitriol I spew seems disproportionate to any crimes this book seemingly committed.

In reality, the one-shot is not a “bad” comic, or at least not bad in the way a lot of the stories I’ve reviewed as part of my Gimmick or Good feature at Comics Should Be Good can be bad (like pretty much any Rob Liefeld comic I’ve tackled). Christos Gage has written Spider-Man and specifically Superior Spider-Man enough times that there’s nothing about this script that reads terribly out-of-character. Stephanie Hans’s art (she also provides inks and colors) apes Alex Ross’s iconic painted style in some places, but there’s nothing abhorrently offensive about it.

But has there been a more pointless issue of Spider-Man released over the past few years? For one, while Spider Ock doesn’t act out-of-character, the Inhumanity tie-in is still a complete tonal and thematic clash with what’s currently transpiring in Superior Spider-Man. And given how high the stakes are currently in Superior, I have no desire to read a Spider-Man story that comes across as completely oblivious to the character’s status quo. I know these major event tie-in issues are the norm these days, but at least the “Age of Ultron” issue seemed to jive with the early stages of the Superior story when Otto was just getting his feet wet as a superhero (and learning to play nicely with others), and the “Infinity” Team-Up issues clicked with Spider Ock’s actions in Mighty Avengers. 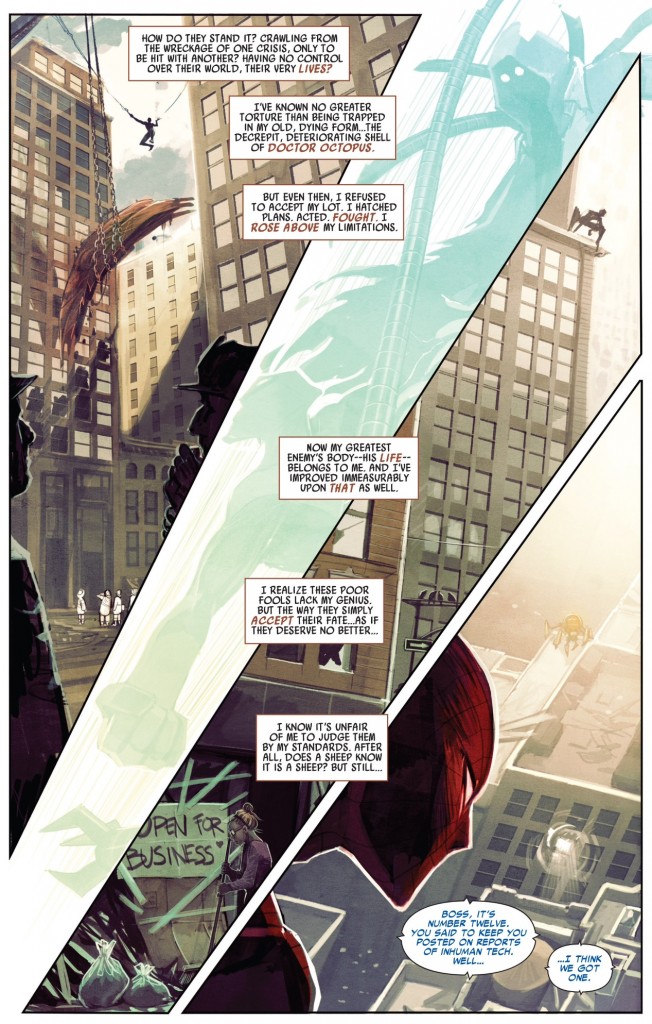 Instead, the Inhumanity issue feels so disconnected from the rest of the character’s storyline. What did we learn about anything in this issue? That Spider Ock likes firefighters? That’s my biggest take-away. Is this scene at the end supposed to be another kernel of redemption for Otto? If so, I really had no emotional connection to that resolution.

Why are we wasting the (assumedly) last few appearances of the Superior Spider-Man with a one-shot that doesn’t have anything to do with anything except a larger Marvel event that’s already been delayed due to some writer/editorial disputes? Which brings me to my larger issue with this comic, which is as hard as Marvel is trying to push it as the next big thing, I really don’t care about Inhuman/Inhumanity.

Depending on which comic book series you follow, the Inhumans have typically been a secondary or tertiary set of characters. The head of them doesn’t even speak, which kind of gives him an aloof vibe. But these aren’t characters that warrant a special, company-wide event in my opinion. And yet Marvel REALLY wants Inhumanity to take off – like really, REALLY wants it. I don’t remember the last time it appeared that they wanted something so bad. To the point that they would replace a writer with the stature of Matt Fraction because he and editorial couldn’t see eye to eye. 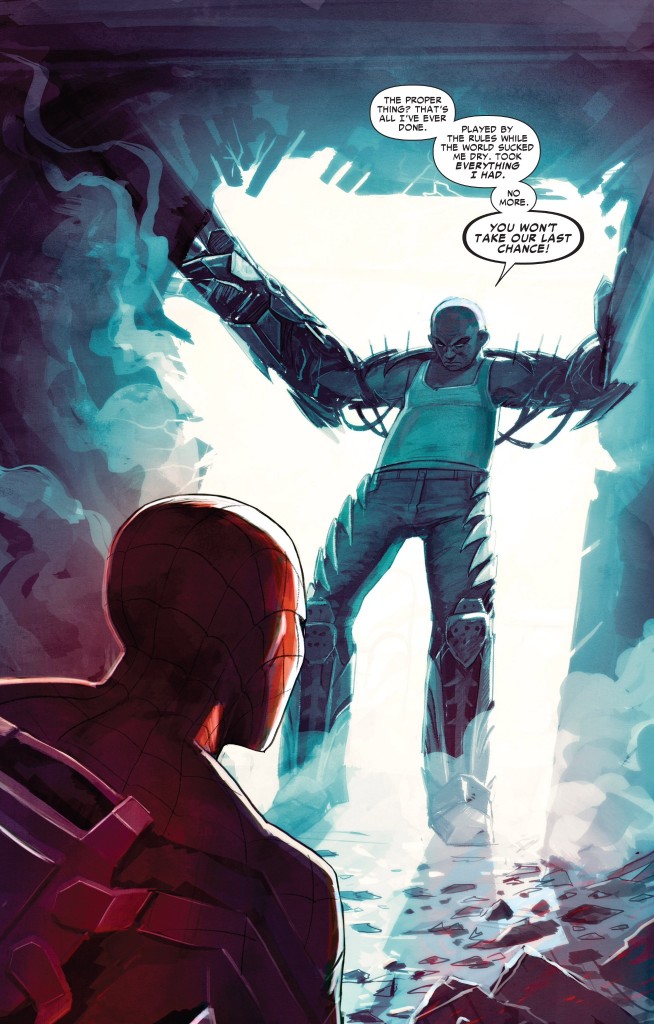 And the reasons behind Marvel’s Inhuman/Inhumanity push (depending on who you trust/believe) seem very cynical. To echo what others have already said, the premise behind Inhumanity – that the “Terragen Mist” bomb released into the Earth’s atmosphere at the end of “Infinity” has someone unearthed all of these mutant-like (but not mutant) powers across the globe – comes across as an editorial work-around for Marvel to create some new characters (or to explain the powers of some existing ones) that they can then claim ownership of in future TV shows and movies. And the reason why Marvel creating a comic book storyline that feeds into movies and television smacks of cynicism, is because of the on-going dispute between Marvel Studios and Sony Pictures (the current owners of the X-Men and other mutant properties, and Spider-Man) over the usage of certain kinds of characters in their respective films.

Because of the broader scope of priorities at play here (and again, this all depends on whether or not you buy into the aforementioned scenario as being the reason why Marvel wants Inhumanity to be a big deal), you get watered-down comics like Inhumanity: Superior Spider-Man, which really don’t matter in the grand scheme of things for Spidey, but are important for Marvel to publish all the same because by slapping the word “Inhumanity” on top of a comic featuring one of their best-selling properties, there’s an outside chance that the person reading the issue might now want to check out this big event. Of course with Inhuman being delayed after Fraction’s dismissal, Marvel is now giving its readers some hardcore benefit of the doubt that they’re even going to remember or care when the series eventually debuts in April. 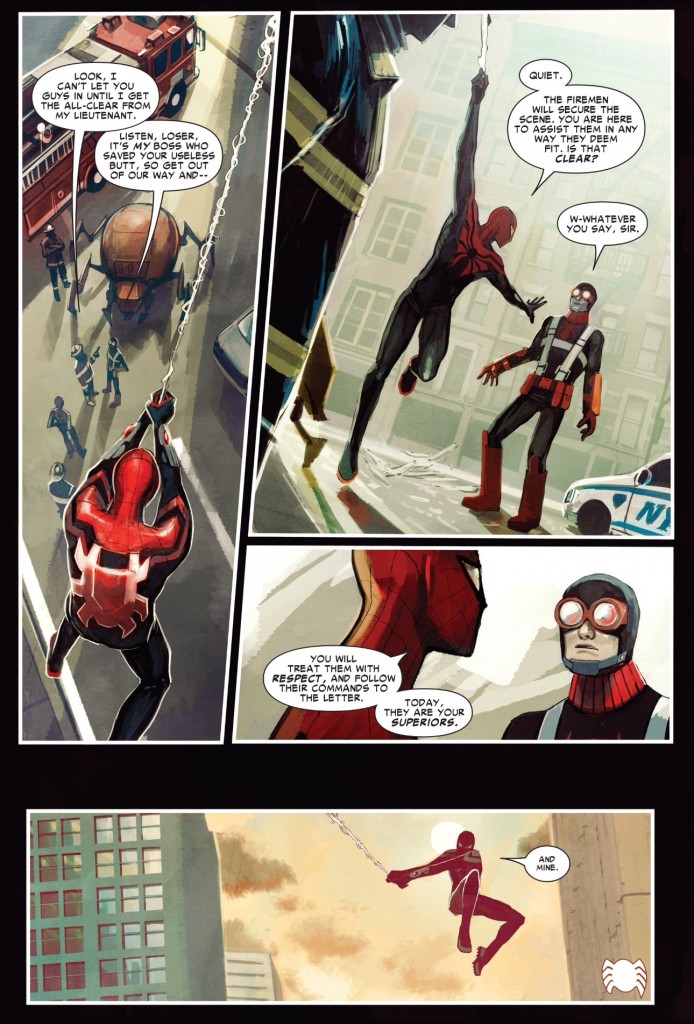 I’ve never been an executive member of a major media/entertainment company, but my years as a comic book fan and a former member of the print media leaves me doubting the actual success of Marvel’s Inhuman/Inhumanity plans in a big way. If Marvel is insistent on its hard-sell approach for Inhuman/Inhumanity, at least give me something that seems remotely important or consequential in the tie-in issue. Truth be told, once Marvel knew Inhuman was delayed, they probably should have held off on publishing some of these tie-in issues until closer to its debut date, but in the case of Superior Spider-Man, that was an impossibility because Peter Parker is returning in April. So instead, I get a comic that had the emotional resonance of paint drying all in the name of some snarky screed that will likely be dismissed by Marvel (and maybe some of you) as another negative article on the internet.