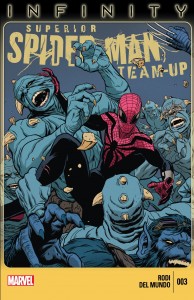 There’s something almost schizophrenic about Superior Spider-Man Team-Up #3 in that there are elements about its story and structure that are a call back to the “olden” days of Spider-Man comics, while simultaneously functioning as an example what our modern-day “event-driven” sensibilities have done to the comic book industry.

To start with the latter point, Team-Up #3 is promoted as an Infinity tie-in, but beyond the references to the new Mighty Avengers team in the book’s first half, Infinity is a total non-entity, making its relevance as a “tie-in” completely lost on me. In his interview for Superior Spider-Talk, former Spider-Man writer Paul Jenkins speaks very cynically about the state of the mainstream comic book industry in terms of how the casual fan is unable to just pick up a comic and read it in isolation without having to run out and buy 20 other issues to understand what’s going on.

I obviously can relate to Jenkins’s frustration. As I’ve noted before, Spider-Man’s “Clone Saga” drove me away from comics for more than five years, not necessarily because of the story (though the quality of a lot of these comics was lacking), but because Marvel had spread the Spider-Man content out so thin across so many titles, I was tired and frustrated of having to trudge out to my local comic book shop every week (and at this point in my life, that required bumming a ride from my parents) and follow this saga to its ever-extending conclusion.

As someone who is reading both Infinity and Mighty Avengers, the references in Superior Team-Up #3 were not lost on me. But what about the casual fan who’s just reading the core Spider-Man titles? If the goal of this book was to inspire the casual fan to run out and buy these other series so they could see what they’re missing, I don’t see this comic successfully (or accurately) selling the story of the two titles (four if you count the Avengers/New Avengers titles that are integral to Infinity’s plot). Superior Team-Up #3 comes across as a hastily put together commercial that doesn’t give readers any insight into Infinity.  Through three issues, Infinity is an intricately plotted space opera filled with mystery and misdirection, along with an overall “epic” feel to the story. Mighty Avengers is more of a summer blockbuster popcorn flick, but the first issue does feature some really fun character moments involving Spider Ock, Luke Cage and others. Per Superior Team-Up #3, both of these comics look like a hackneyed “good versus evil” fist fight in the streets of Manhattan. No broader vision. No space opera. No characterization. So why did we Marvel choose to use a Spider-Man team-up book of all titles to push Infinity? I know, I know … sales. 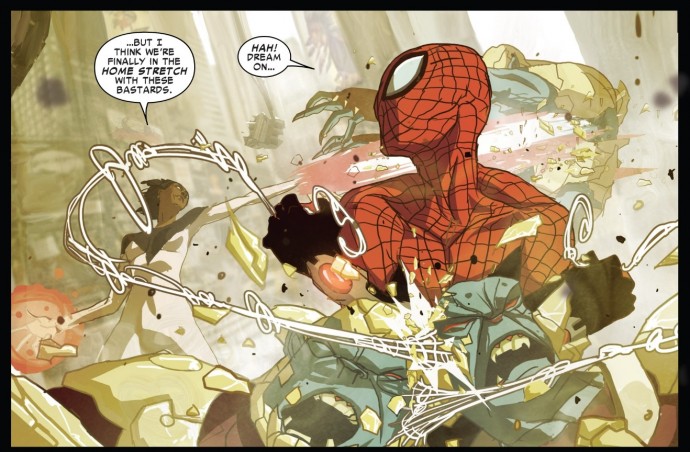 On the flip side of this equation, once the action turns away from the Mighty Avengers and Thanos’s invasion, Superior Team-Up #3’s plot is reminiscent of what Marvel Team-Up was like in its infancy. The story of the bookworm-turned-superpowered Sylvia, who would rather read about the Middle Ages than embrace modern technology and conveniences is something that’s probably a bit too off-beat and non-commercial to find its way into the main Superior Spider-Man series, but is certainly good fodder for a “B” title that is less risk averse sales-wise because there are fewer eyes reading it anyway. As someone who is currently reading the entire Marvel Team-Up run from issue #1 (so inspired after reading the Chris Claremont/John Byrne issues a few weeks ago), I’m amazed that some of these Bronze Age team-up stories ever found their way into a Spider-Man comic book. That’s not to say these are “great” stories – in fact some of them are pretty lousy. But I admire Marvel all the same for finding a place for people to tell totally different kinds of stories involving Spider-Man.

Through its first two-issues, Superior Team-Up has re-introduced the concept (despite there being an Avenging Spider-Man series that preceded it) and had a crossover with the Scarlet Spider series. Putting aside the Infinity “tie-in,” Superior Team-Up #3 is the first instance where the story felt like an isolated little piece of the Spider-Man story universe. How it ties-in to the larger Superior storyline is completely irrelevant and while I definitely want to see Spider Ock’s characterization remain consistent from title to title (and writer to writer), I don’t need to feel like the plots of all these comics need to intermingle. 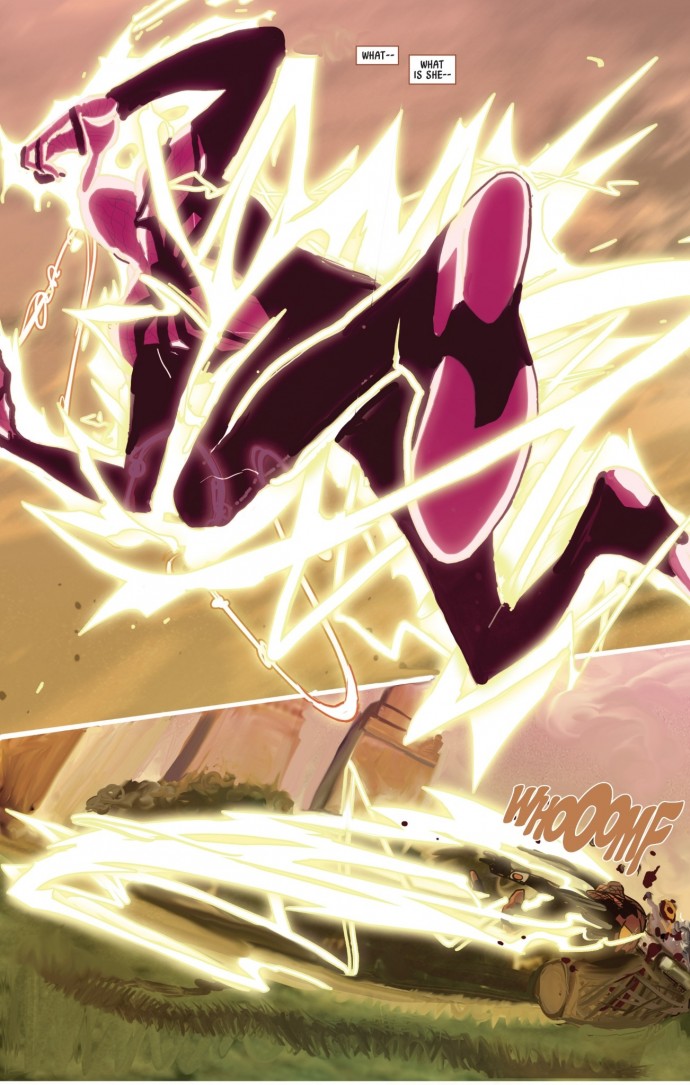 Of course, there was so much focus on the Mighty Avengers in the first half of this comic, there was very little panel space left to make Sylvia a character I was compelled to become invested in. There’s a token cliffhanger ending of Sylvia maxing out New York’s power grid with her new-found Electro-esque powers, but I’m not exactly waiting with baited breath to find out how Spider Ock saves the city this time, just as I wasn’t too worried when Peter was killed by Morbius during the first few issues of Marvel Team-Up. 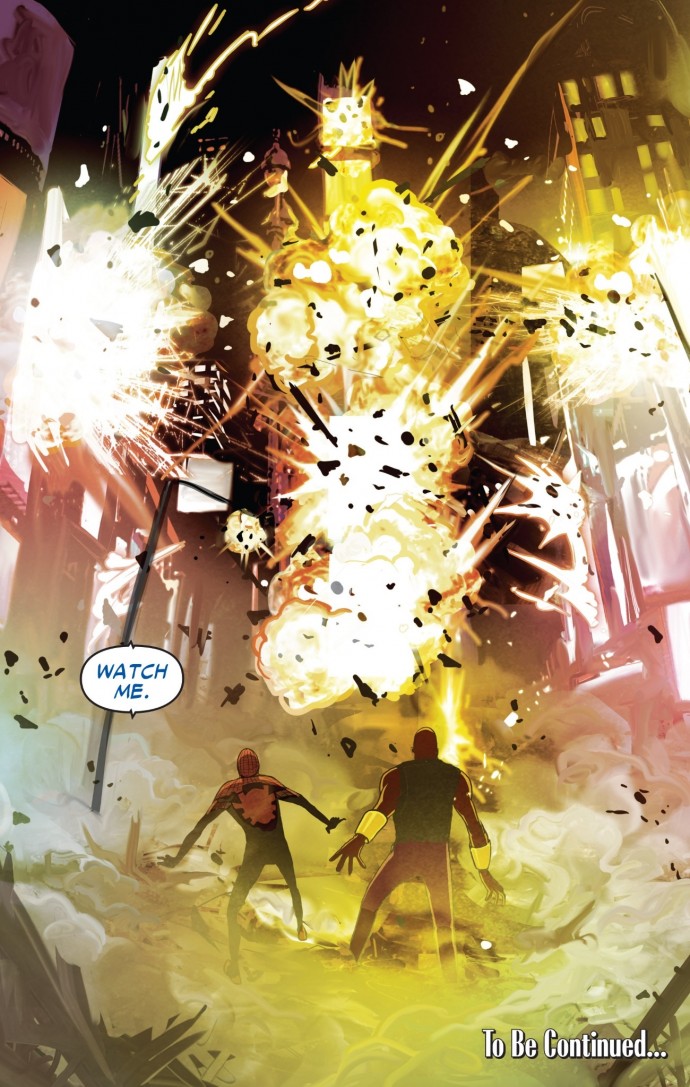 I guess it’s a back-handed compliment for me to basically dismiss this story for its lack of urgency, but beyond the frustration event tie-in and slapdash characterization, there exists a kernel of a successful formula for Superior Spider-Man Team-Up series that can be mined for future issues. If this comic can just be the landing place for one-and-done or short, two-part arcs that involve heroes and villains Spider-Man otherwise would not interact with (i.e., not the entire Avengers team, or a villain like the Green Goblin) Superior Team-Up could be the place for Spider-Man fans and casual comic book readers get fun little adventures with off-beat, interesting characters. Unfortunately, since it seems like the next issue of Team-Up is also being branded as an Infinity tie-in, my hopes aren’t high that Marvel is going to adopt this formula any time soon.