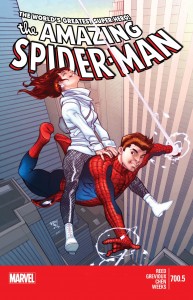 In the past, I’ve talked about my long-standing affinity for the Fantastic Four, in large part because of the crossover in the very first ASM, but also because as a lifelong member of “Team Marvel,” I’ve viewed Reed, Sue, Johnny and Ben as comic book royalty. The Stan Lee/Jack Kirby run on Fantastic Four might very well be the best Marvel series of the Silver Age (yes, I’m debating ranking it ahead of Lee/Steve Ditko’s work on Spidey) as its chock full of fantastic comic book fun and space operatic situations that elevate the book to breathtaking creative heights. Spider-Man/Peter Parker was the relatable Silver Age Marvel sensation, but the FF dealt with new technologies and end of the world situations like the coming of Galactus (which again, might be my favorite Silver Age story in all of comics. It’s pitch perfect). 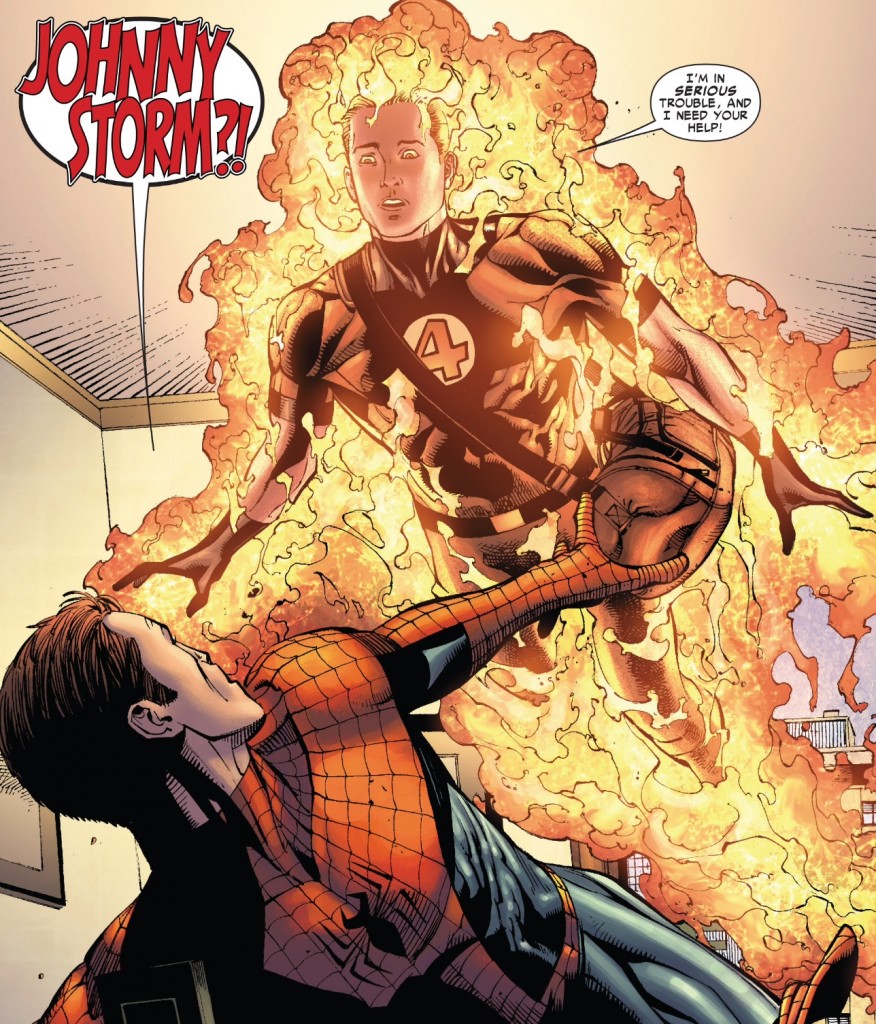 The last time I picked up a FF comic with any regularity, Marvel had just shoe horned Spidey onto the team and I was fairly unhappy with the results. The series read as if Spidey’s inclusion was forced upon writer Jonathan Hickman, and as a result, the character was underused and poorly written as a hackneyed jokster. When Dan Slott most recently brought Spidey and the FF together for Amazing Spider-Man, he seemed to be flexing his Fantastic Four continuity knowledge muscles a bit too much for my liking, resulting in an arc that left me a little flat when it was all over.

So you can imagine how cautiously optimistic I was when I heard that ASM #700.5 would be a Spidey/Human Torch story. I think the last time I got a Spidey/FF story I really liked, we were still in the “Brand New Day” era of Spider-Man comics. 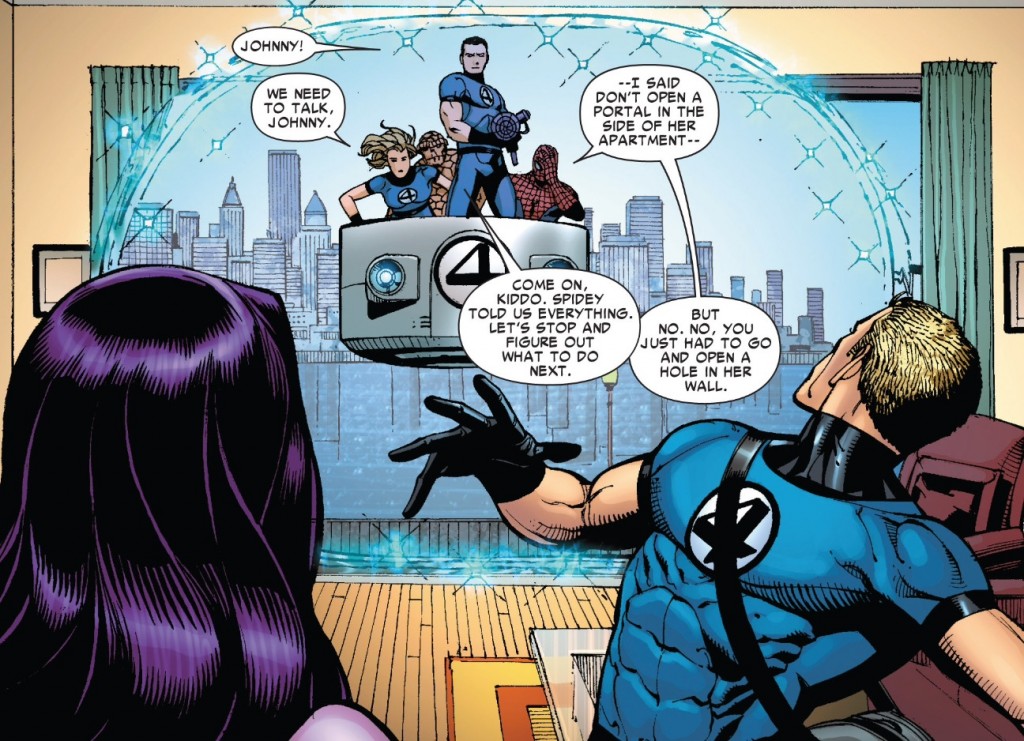 Reed and Chen manage to capture the fun and humor of the pairing, as they spin a yarn about Johnny getting a visit from the future by a bearded Thing holding a duffel bag with a device that threatened to end the universe in an instant. Future Thing charges Johnny with keeping the device from Reed, since he is projected to detonate it. That naturally brings Johnny to Peter’s apartment, who is then roped into this “save the world or die” scenario with the rest of the Fantastic Four.

Reed’s script is filled with rapid fire jokes that read more like a sitcom than a standard comic book, but since that captures the jovial, sibling rivalry dynamic of Peter/Johnny so well, I’m totally okay with that. Reed is especially adept at mixing the pitter patter of the story’s narration and dialogue, which keeps this already light and breezy story moving at an accelerated pace. 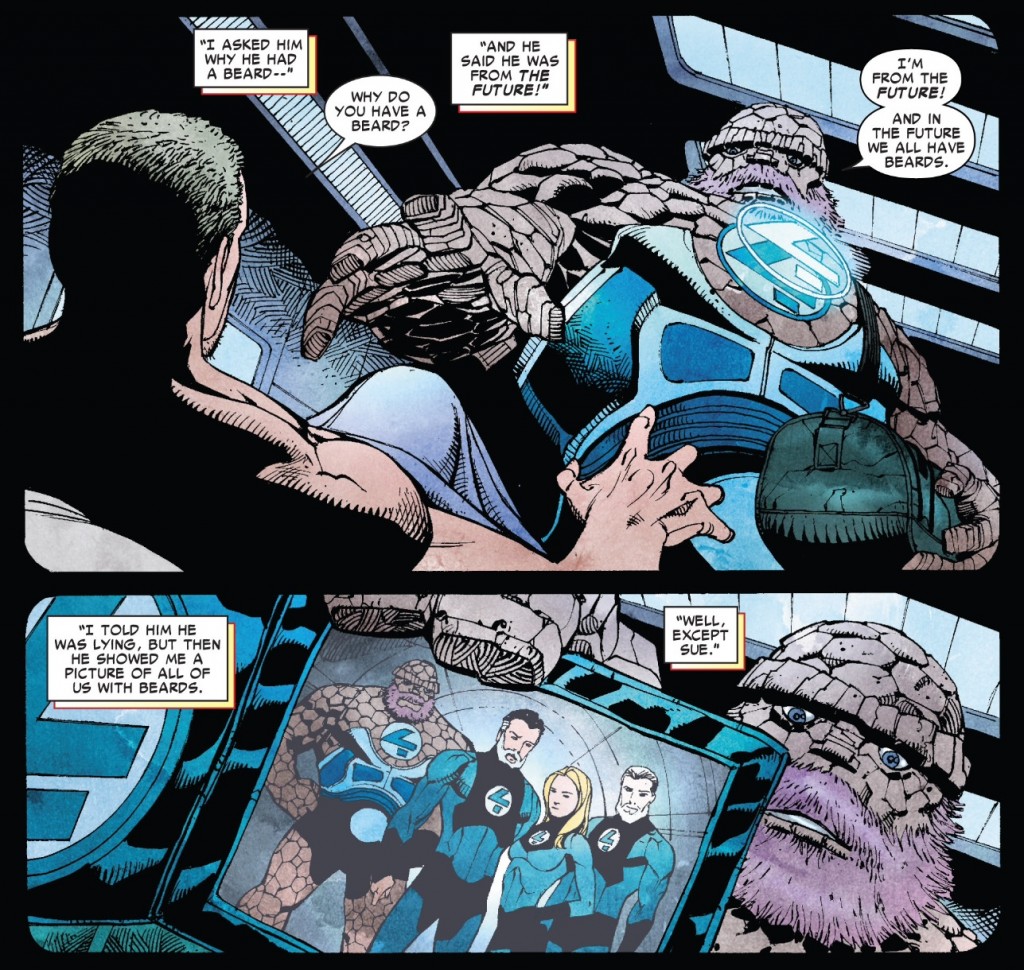 Johnny’s plight eventually brings Spidey and the FF to Mary Jane’s apartment, which leads to one of my favorite lines from this entire run of point one issues: MJ questions Peter if there’s an end of the world device in her apartment. When Peter tells her that the device could be detonated anywhere and the world would still end, MJ bemoans the fact that it would still be a real shame if it is detonated in her apartment. 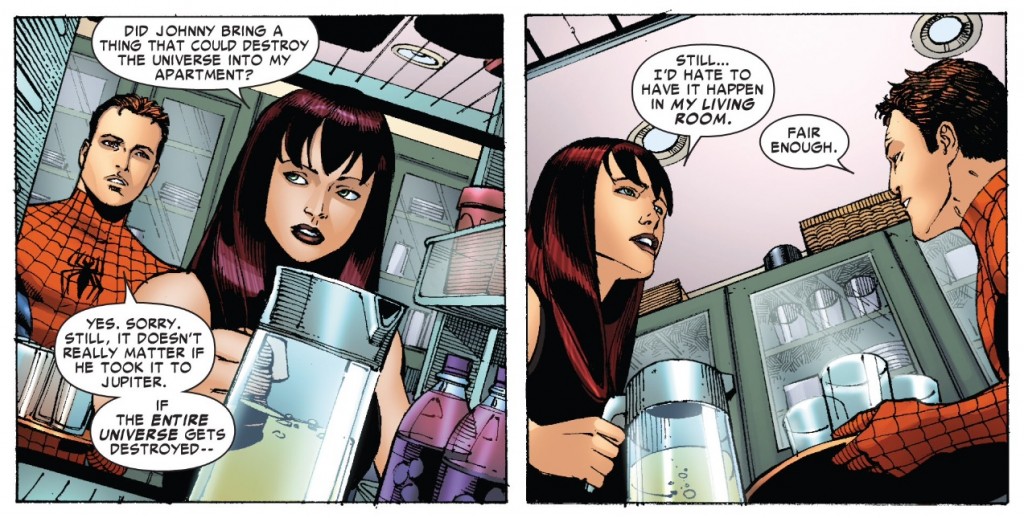 The upshot of the story is that future Thing is just playing a trick on Johnny, which leads to a bit of a circuitous ending of future Johnny trying to prank Ben who in turn tells him that his joke is already in the past. It’s not a terrible ending by any stretch, but it’s possibly one “hardee har har” too many from Reed and the story could have ended more simply with the earlier reveal.

I also found it a bit odd just how cavalier both Spidey and the Fantastic Four were about Peter’s identity. At the start of the comic, Spidey’s trying to get some sleep in his apartment – still wearing his costume. Then when the FF arrive at his apartment, they keep referring to him as Peter without even so much as pausing to make sure that nobody is within earshot.

But these are minor quibbles for an otherwise entertaining story.

As for ASM #700.5’s “B” story, Kevin Grevioux and Lee Weeks manage to deliver an emotional gut punch much in the style of Roger Stern’s epic “Kid Who Collected Spider-Man” with “What Would Spider-Man Do.” This story, which deals with a teenager who is fatally shot while involving himself with one of Spider-Man’s fights, is not as elegantly written as what Stern produced, but is a good representation of what a quality “B” story should offer all the same (especially when compared to the “B” stories in ASM #700.3 and #700.4). 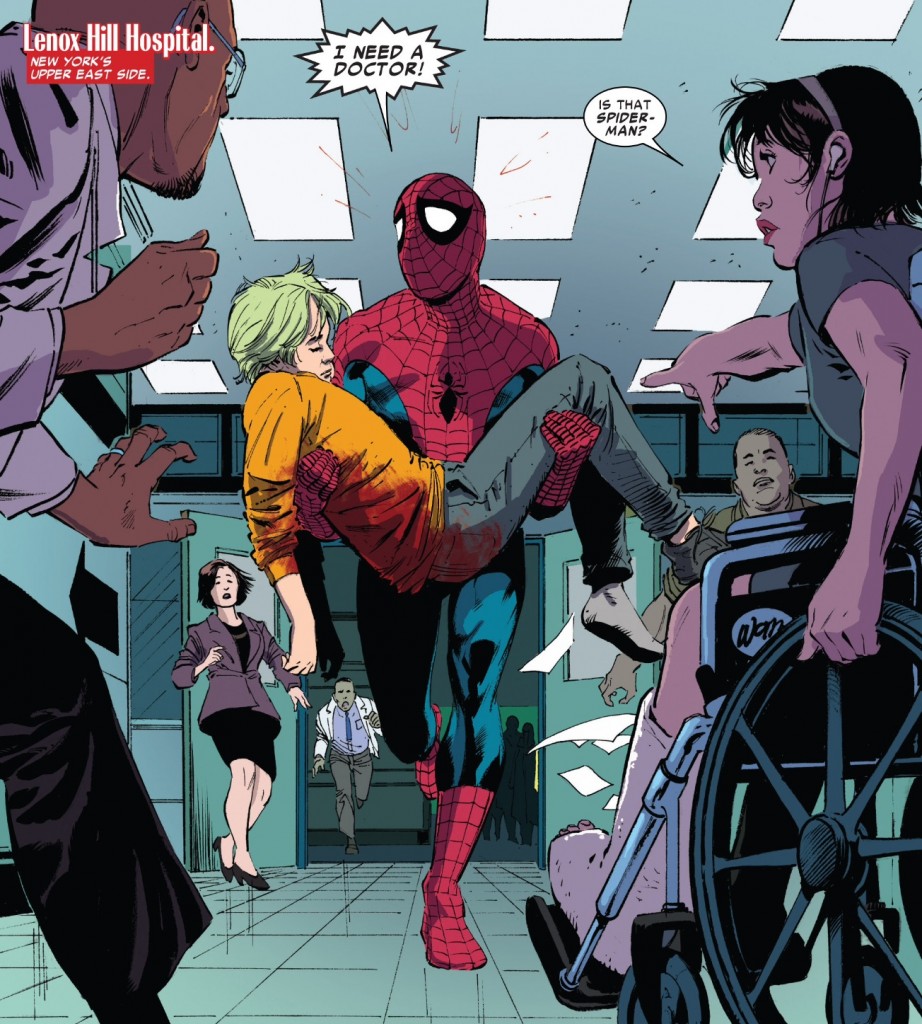 Overall, I thought these point one issues were just fine, if not poorly promoted/marketed by Marvel. I spoke about this to some degree during my thoughts on “Spider-Man Frost” a few weeks ago, but I definitely didn’t agree with the decision to tout these five comics as some kind of “triumphant” return of Peter Parker, especially in light of the current “Superior” status quo in the Marvel universe. It set false expectations from some fans who weren’t able to read in-between the lines of the solicitations and the promotional bluster to see these were all evergreen “inventory” stories that had been sitting on the shelf for some time and were just now seeing the light of day. That’s not a bad thing, but I’m guessing it’s a lot less sexy to advertise a new comic as: “read the story that ‘First Blood’ author David Morrell first wrote nearly six years ago” or “for the first time ever, Joe Casey’s ‘Brand New Day’ story about a supervillain hospital is now available for purchase.”

I still maintain that like Untold Tales of Spider-Man during the 90s “Clone Saga,” there’s an appeal for these kinds of Spider-Man stories, especially when current storylines are so dramatically different from the status quo. Hopefully next time Marvel is a little more upfront about what its publishing and fans can read these stories with reasonable expectations, rather than bemoaning the fact that they were promised the “return of Peter Parker” and instead got the quiet, pensiveness of “Frost.”