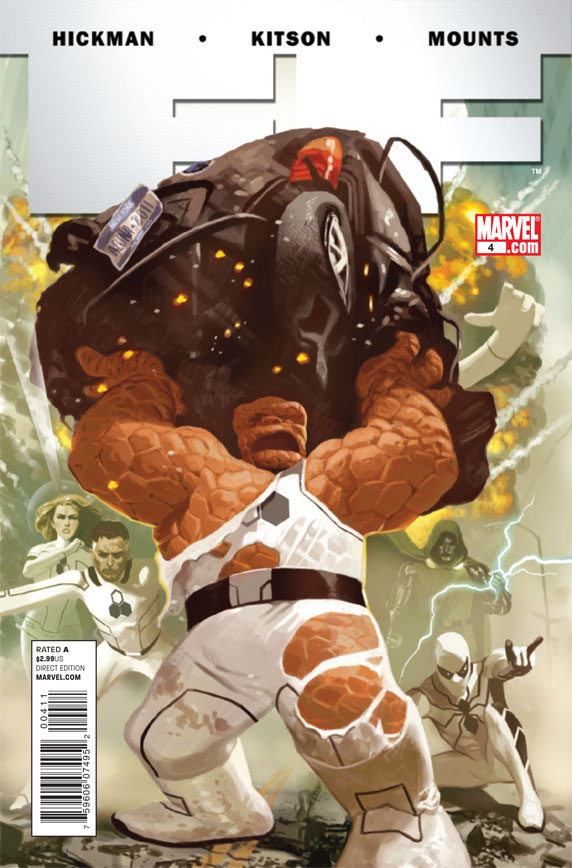 So I’m breaking my own rule and despite the fact that Spider-Man is still yet to play a significant role in any of the new FF (nee Fantastic Four) being pumped out by Marvel and writer, Jonathan Hickman, I still want to dedicate a post on the series.

What can I say? I am sincerely enjoying the series, but I’m still trying to wrap my head around why Marvel decided to insert Spider-Man in as Johnny Storm/Human Torch’s replacement. When the series debuted a few months ago, the inclusion of Spider-Man was such a big deal, I was assuming Marvel had some big ideas for his role with their flagship superhero team. Instead, it seems like the creative team is struggling to find ways to adequately play with their new toy. And then it got me thinking – despite the long-standing friendship between Spidey and the Fantastic Four, was he even a reasonable choice logistically to be a part of the group? 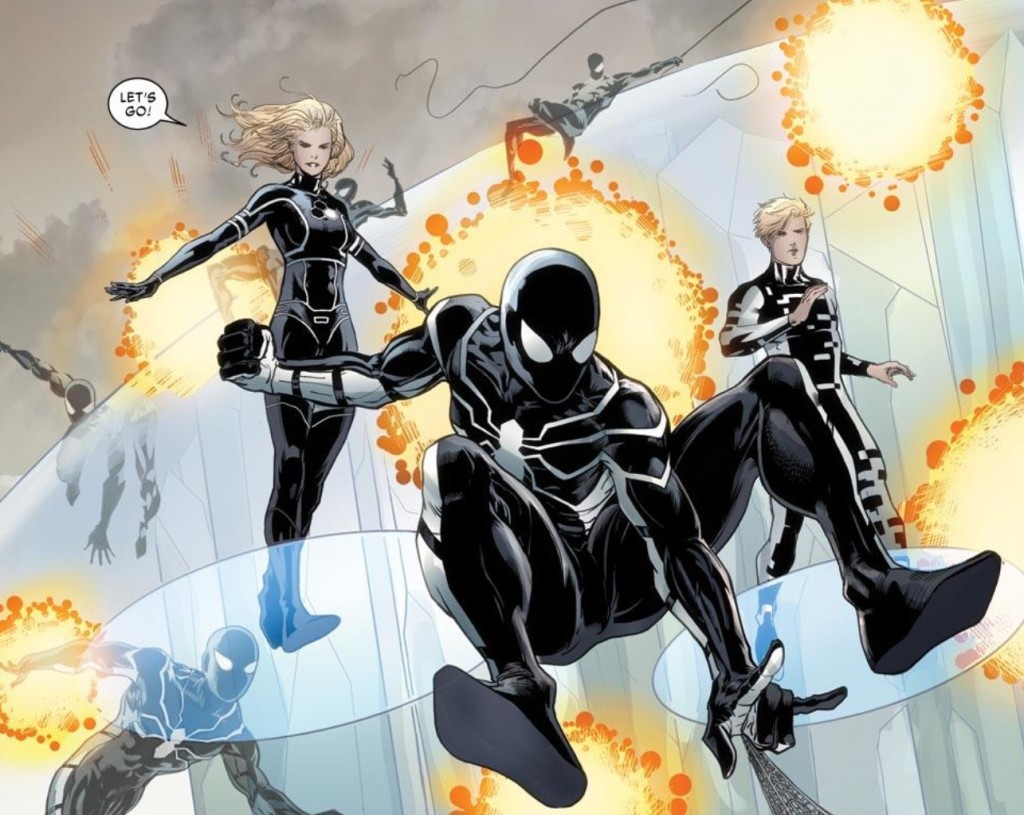 Putting aside the time constraints Spider-Man is already dealing with – he has his general adventures as Spider-Man, combined with his job, his girlfriend, his role with the Avengers and now another team in the Future Foundation. Just writing all that out sounds ridiculous unless Peter Parker has someone got his hands on a time-turner from the Harry Potter universe and is using it to accomplish all of his super-hero commitments. But again, putting that side … does Spider-Man actually add anything to the Future Foundation both practically as a superhero asset and as a means of entertainment for readers? 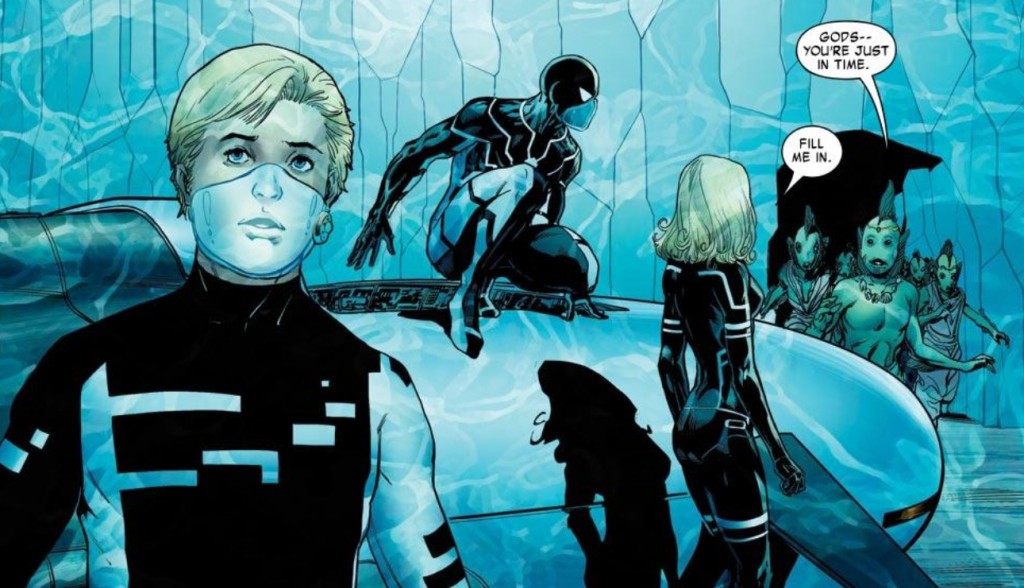 In FF #4, Spider-Man and Sue Storm/Invisible Woman, have a funny exchange while Sue is making sandwiches for the kids. Spidey mocks all of the crusts she’s cutting off, but then acts childishly disgusted when she asks him if he wants mayo on his sandwich and finishes the joke by also requesting no crust. It’s a cute moment that I enjoyed, as Spider-Man’s sense of humor and wit was always something I’ve loved about the character, but it’s a sequence that obviously adds very little to the plot of the comic. 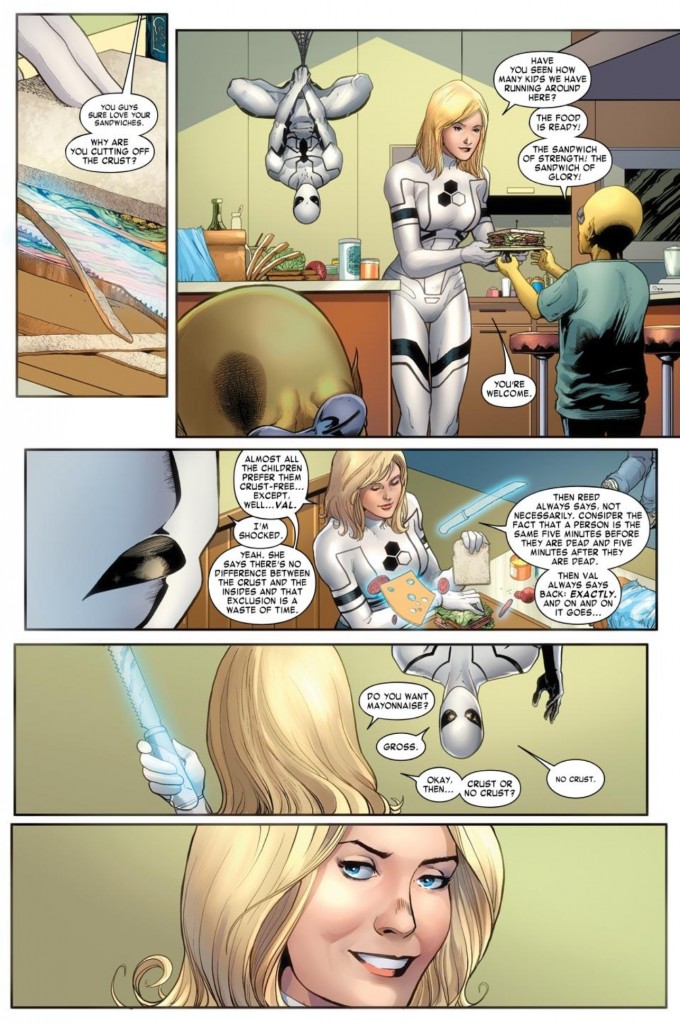 A few months back, I talked about how Spider-Man and Human Torch will always be inextricably linked because they both represented a “youth movement” of sorts in superhero comics when they were introduced in the 1960s. The duo started as adversaries, before developing a friendly rivalry that mirrored two competing best friends from school. But outside of replacing youth with youth, what is Spider-Man bringing to the table in the Future Foundation? The Human Torch had a very unique skillset that Spidey can’t touch. He does not possess the ability to turn into fire or fly (he still needs something to stick his webbing to) and it seems like every other superhero skill Spidey possesses the other remaining members of the FF have covered.

Spidey is a brilliant scientist who was able to create his own web-shooters and is constantly developing new technology that he can use on his missions. But whereas Spider-Man often uses his intellect to outsmart his foes, he’s not even the brightest person in the FF. Reed Richards/Mister Fantastic is considered the most advanced scientific mind in the Marvel universe. Whenever Spider-Man has been stumped with a scientific issue (i.e. the actual composition of his strange new black suit), Reed was Spidey’s go-to guy for the solution (holy crap, that suit is actually a alien that’s feeding on you like a parasite).There’s no contest, Spider-Man is smart, but Reed is beyond genius-level. So scratch “intellect” off the value Spidey adds to the FF.

One of Spider-Man’s other great attributes is his extraordinary strength – directly proportionate to the strength of a spider. Such a strength allows Spidey to stand toe-to-toe with physically imposing adversaries. But again, he’s not even the strongest member of the FF. The Thing is made completely out of rock, giving him a brute strength that Spider-Man cannot approach. The Hulk is universally considered one of the strongest, if not THE strongest character in the Marvel universe, but when The Thing and Hulk have squared off, those occurrences have been considered landmark events because it’s the comic book equivalent of the immoveable object meeting the unstoppable force. Spider-Man is not even in the same league as The Thing when it comes to super strength.

The last distinctively Spidey attribute I can think of is speed and dexterity. In a foot race, Spidey still clearly beats out the remaining members of the FF. But with his spidey sense gone, Spider-Man no longer has the stealth abilities to sneak up on his opponents and avoid danger. But you know who does? The Invisible Woman, who, as her name implies, can turn invisible. So while Spidey can climb walls and give his foes the drop by hanging out on the ceiling, because his innate sense has been disabled, he can no longer know for sure if he’s actually surprising his foe. No such problem for Sue Storm, who again, can just turn invisible. 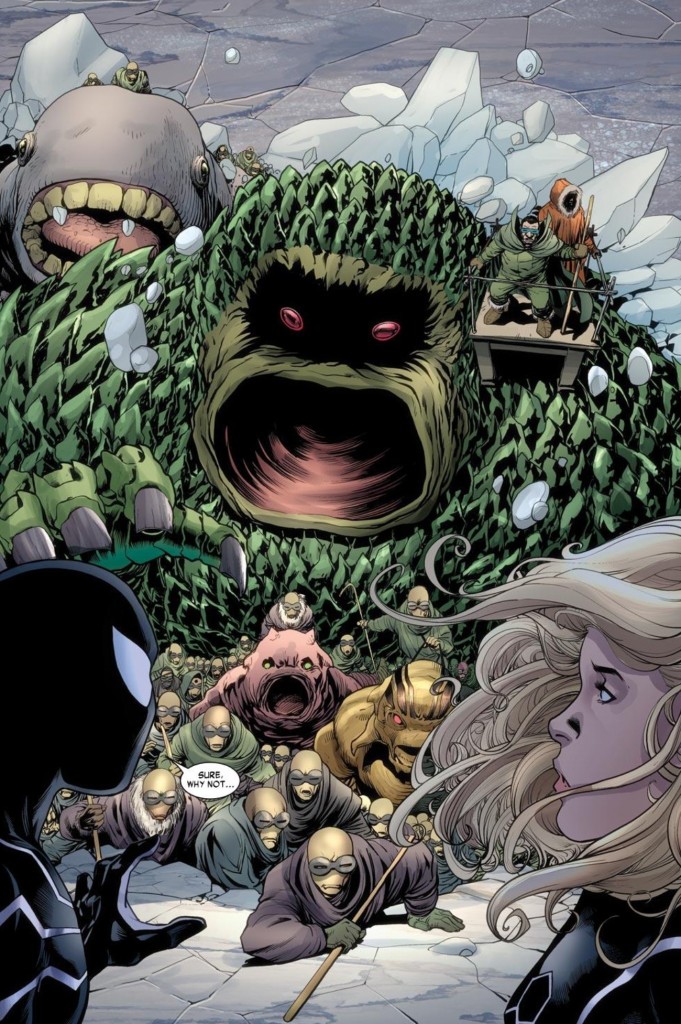 So, if the only logistical reason for Spider-Man to be a member of the FF is to show up for a few panels and crack a funny joke, the FF could get the same output from Jerry Seinfeld (though Seinfeld is notably a Superman guy). But seriously, four issues into this series, I can’t help but be cynical that the only reason Marvel made such a big to-do about Spider-Man’s inclusion is because he’s the company’s most popular character and he would sell more FF comic books. Prove me wrong. Still, I’m enjoying the series, and Marvel’s marketing ploy must have worked, because there’s no way I would have checked the series out in the first place without the Spider-Man connection, but I’m still disappointed that Marvel has a great solitary hero in Spidey and a great team in the FF, but can’t seem to marry the two together in an effective way. If Marvel doesn’t inevitably resurrect the Torch, I do hope the inevitably give Spidey some of his free time back and they find a more suitable replacement who can at least bring a skillset to the table that is unique to the group and ultimately helpful.