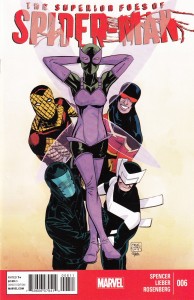 If the Superior Foes of Spider-Man series is like a really attractive girl that you want to date, but not sure you two are ultimately compatible, that means issue #5 is your first date that went really well, but you’re still not sure that she likes you and issue #6 is the unexpected phone call you get from the girl wanting to know why you haven’t set up the next month’s of dates, and by the way, this may be presumptuous, but do you want to meet my parents …

In other words, I really, really enjoyed Superior Foes #6.

Everybody who has checked out this series knows how funny it is. It’s arguably the funniest comic book on the racks right now, and yes I’m including Hawkeye. And yet, Superior Foes #6 shockingly finds ways to up the humor ante from previous issues with some of the most hilarious sequences I’ve read in a comic book title … maybe ever.

If you’ve already read this comic and you’re just checking my blog post for affirmation of your beliefs, then you already know that one of the scenes I’m referring to is of course the entire origin story of Doctor Doom’s mask-less portrait. If the thought of a drunk, tearful Victor Von Doom getting his portrait painted isn’t enough to make you laugh, then perhaps the line, “I want you to draw Doom … like one of your French girls” will. 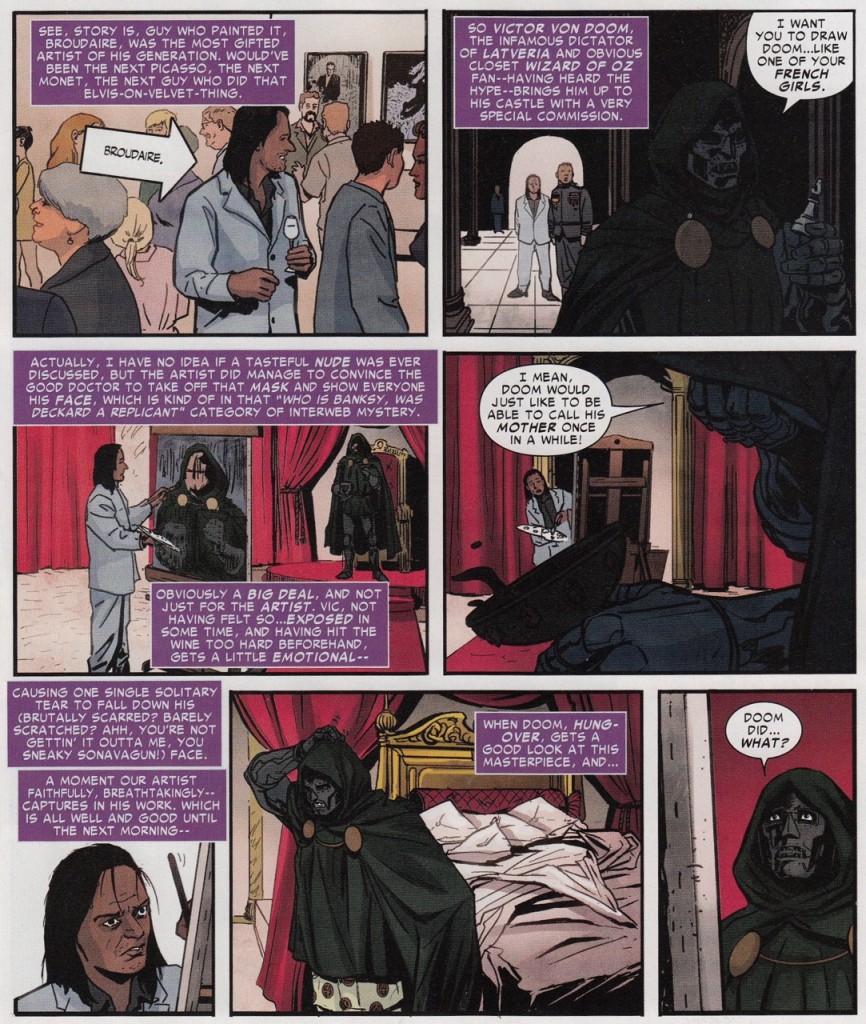 So for those keeping score at home, Superior Foes #6 managed to take (arguably) the most feared villain in the entire Marvel universe, and make him look like a chump … at least if you take Boomerang’s word for it.

Then there’s Abner Jenkins, aka, the original Beetle, aka, Boomerang’s supervillain parole officer, making an unannounced visit to Fred’s house and attempting to make a cool-looking exit out the window. The only problem is, his high-tech suit makes it too difficult for him to fit out the window. So instead, we’re left with a fantastic scene of him struggling to “make an exit” before finally giving up and relaying his catchy phrase to Boomerang (and getting props from Boomerang in the process). 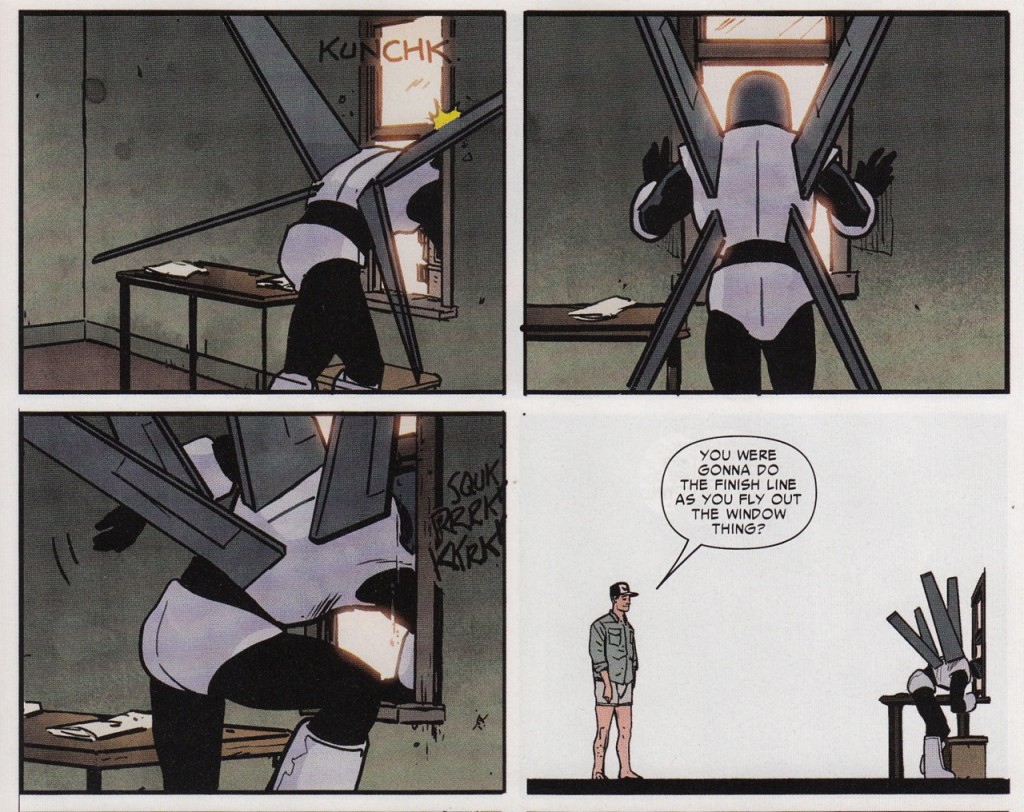 Those scenes alone elevate Superior Foes #6 to pantheon status for 2013 comics, but Spencer and Lieber manage to accomplish other outstanding things along the way, including serving BOTH story and character, which had been a bit of a quibble of mine in the early stages of this series. After initially focusing on one meandering storyline of Boomerang getting the Sinister Six (minus one) together for one last score, Spencer and Lieber now have three different arcs picking up steam: Boomerang’s deception of his mates, the remaining members of the Sinister Six’s confrontation with the Owl and his henchman, and poor cowardly Shocker, presumably still running for his life while holding the head of Silvermane.

Then there’s the final big reveal that adds a new layer of depth and intrigue for one of my favorite characters in the series thus far, Lady Beetle. After mysteriously taunting the Owl for a number of pages and on the verge of earning a bullet in her skull for her troubles, we discover that everyone’s favorite albino gangster Tombstone is her father. 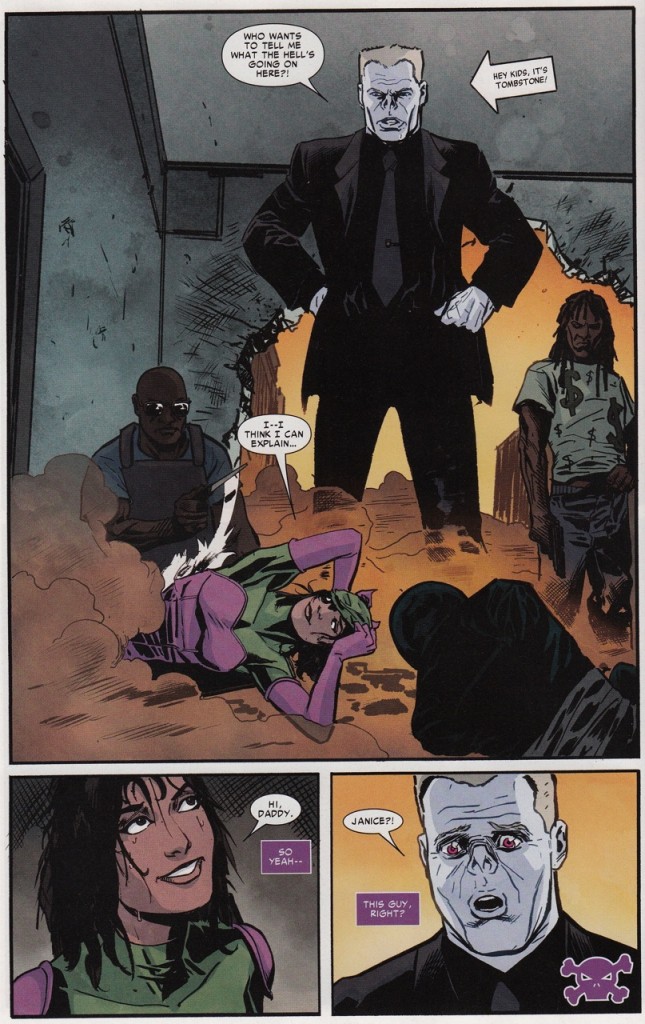 As someone who’s not even that much of a mark for Tombstone (I guess you can argue he’s one of the better villains to be introduced in the 1980s and I certainly liked his storyline with Robbie Robertson, but I still only consider him a minor addition to Spidey’s rogue’s gallery), I couldn’t help but smile with Spencer and Lieber’s reveal. First of all, Tombstone’s explosive entrance is just a phenomenally unexpected moment and then the panel of Lady Beetle’s “hi dad” face, which is simultaneously beaming with affection and oft-putting for the reader. It’s brilliant body language design from Lieber, who’s developing into a master of that art form.

In other words, Superior Foes is a series that’s firing on all cylinders right now, and considering issue #6 was its last entry in 2013, I think I can safely say this is the best new title to be introduced into the Spider-verse in YEARS, and warrants all of the attention it’s been getting critically. Now, I can only hope that enough people are BUYING this series at their local comic book shop (or digitally if that’s how you roll) because it’s a great read, whether or not you even like Spider-Man.

Interestingly enough, a few months ago, I was starting to debate the merits of continuing to review this series because of how disconnected it feels from the larger Spider-Man status quo (considering I already discuss Superior Spider-Man, Superior Team-Up, and all of the associated one-shots and mini-series that Marvel has been pumping out with reckless abandon in recent months, shedding one title from my monthly writing duties was justifiable). But going back to my original analogy, Superior Foes is the comic I’m in love with right now, and if you love someone, you just find a way to make it work.

So yeah, I definitely want to meet the parents.