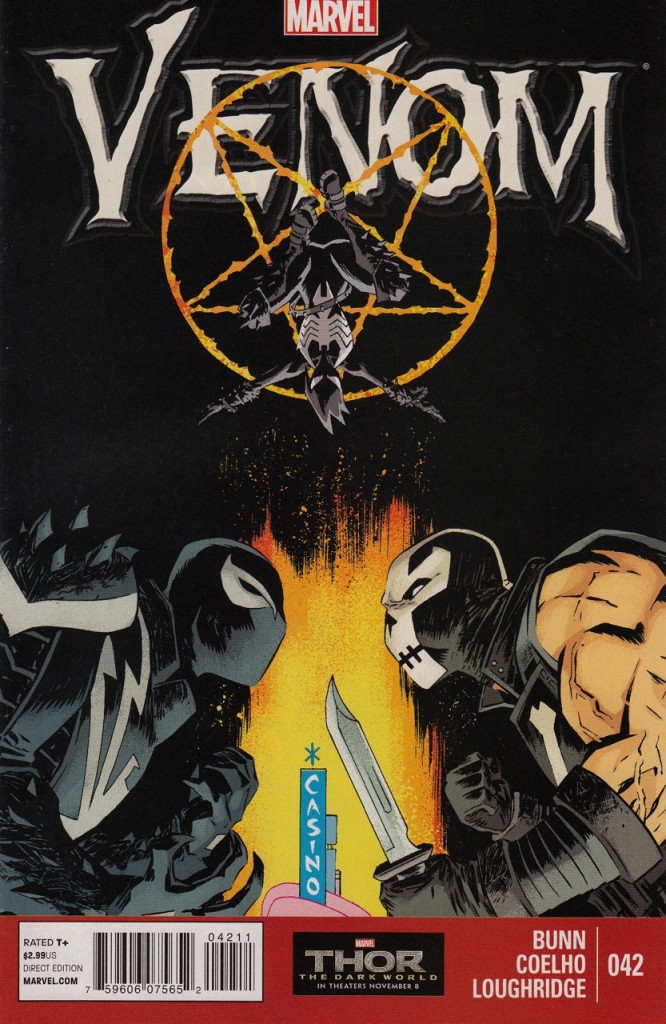 The last time I wrote about Flash Thompson’s escapades as Venom, I had more or less publicly “broken up” with the title. Then, I learned a few months later that Marvel had done the dirty work for me and cancelled Venom at issue #42. Despite my overall dissatisfaction with the comic, I figured with just a handful of issues left, I would stick it out until the bitter end, for no other reason that it would give me an opportunity to talk about the series one more time here on Chasing Amazing and either issue some sort of mea culpa, or kick additional dirt on the title’s grave.

In a bit of a cop out, I’m going to do both. Over the last handful of issues, writer Cullen Bunn re-centered the focus of the series on Flash’s inner demons and overall flawed character, demonstrating what I’ve been saying about Venom from the get go: the story is much richer and satisfying when Bunn goes back as far as the Stan Lee/Steve Ditko days and portrays Flash as someone who has always had the ego to be a superhero, but never the integrity.

To accomplish this, Bunn introduces a new symbiote, Mania, who is actually a high school student of Flash’s, Andi. When Venom/Flash is there to watch Andi’s father get murdered by Jack O’Lantern (and then a piece of the Venom symbiote possesses the girl), Flash is now responsible for protecting her. But because this is Flash we’re talking about, he doesn’t realize how “with great power must also come great responsibility” (or something like that) until the very end of the series, which is a nice little character moment for Bunn to end on. 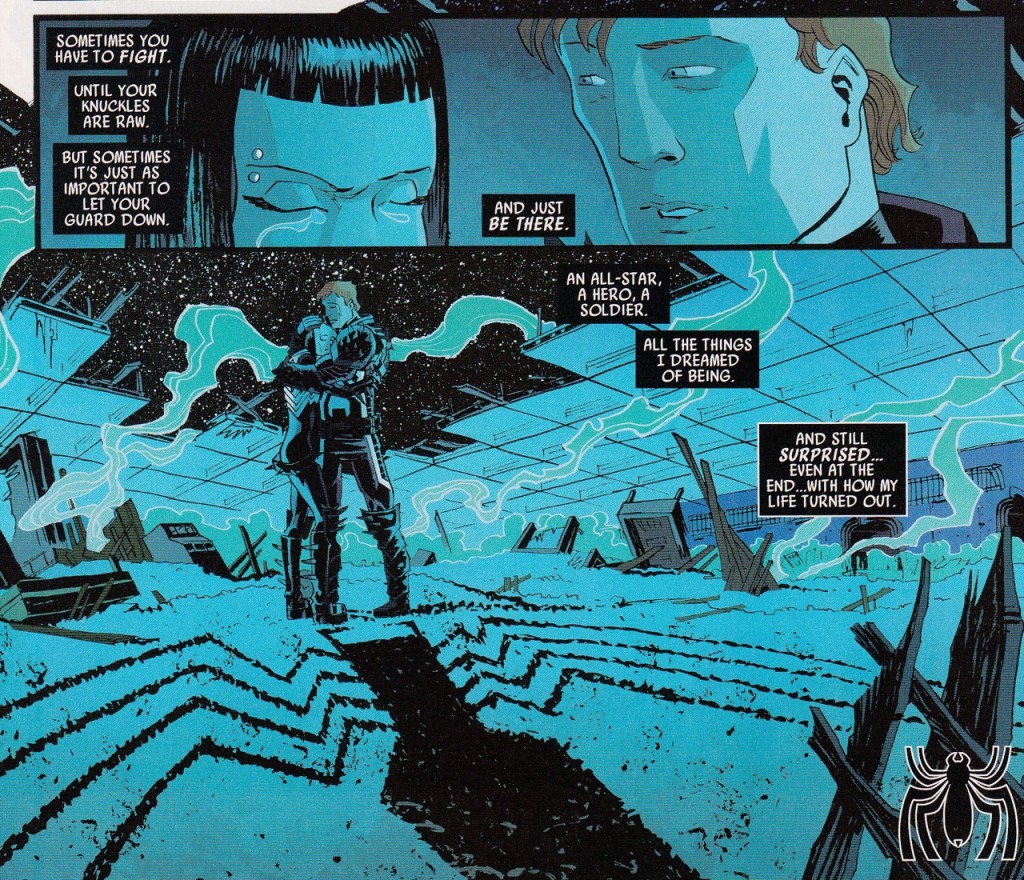 Unfortunately, there is a big mess of a storyline that precedes Flash’s epiphany serving as another reminder of just how far from the original Dan Slott-scripted premise in Amazing Spider-Man #654.1 the series has strayed. Gone are the quirky Agent Venom missions that showed Flash aspiring and failing to live up to the heroism of his idol Spider-Man and in its place is a story about Mephisto and the mark of the devil. Perhaps in a Silver Surfer comic, or some other cosmic series, a Mephisto plotline would feel appropriate, but not in a Venom story … that stars the high school bully from Amazing Fantasy #15. 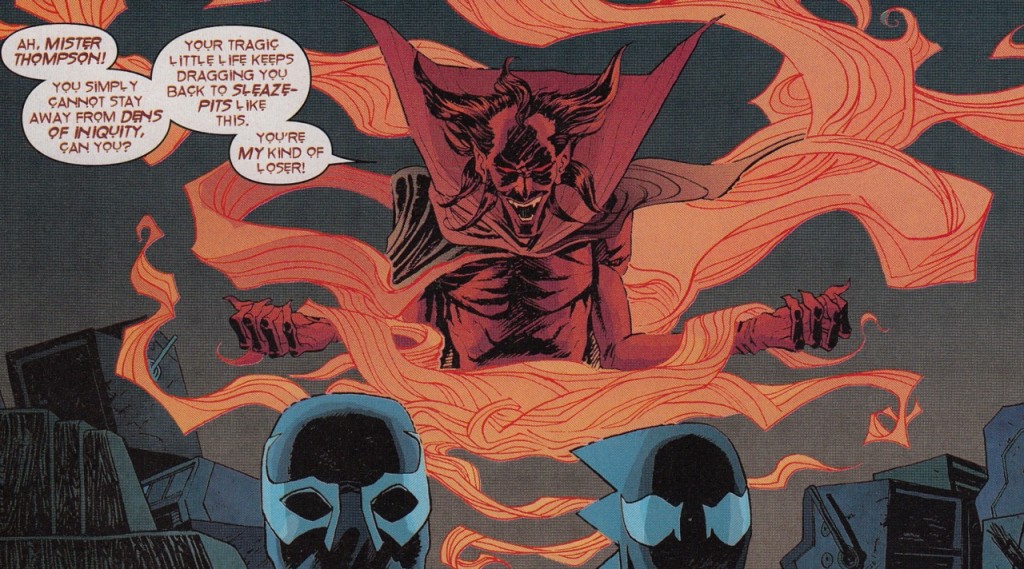 While some may say that a different approach to Venom and Flash is refreshing, there still needs to be a certain amount of faithfulness to the character – in this case, both of them. Indeed, there’s a Faustian “deal with the devil” element to how the crippled Flash came into possession of the symbiote, but when I think about the larger Spider-Man universe – its cast of characters and most memorable storylines – devils and demons never really come to mind (unless they’re breaking up Peter Parker’s marriage, which is a universally reviled moment in the character’s history). Perhaps the solution would have been to just end the series when Rick Remender’s run ended last year – as I still maintain that he tied up Flash’s story quite nicely, with only one diversion into the underworld with “Circle of Four” (my least favorite Venom story in the first half of the series) – but things were going well enough that Marvel pushed on with Bunn.

It’s not that I think Bunn is an inferior writer to Remender, but he clearly wanted to push the series in a wildly different direction (and says as much in his letter to readers at the end of Venom #42) and the final result is a story and a bunch of characters that feel totally incongruous and unrecognizable to me. Compare how Bunn ends Venom with what Yost is currently doing on Scarlet Spider and the difference is very obvious. Despite a few missteps, Scarlet Spider’s creative has been seemingly more honest with itself about its future and recently kicked off a storyline with Kraven the Hunter that’s been building since the title’s inception and also brings back some plot points that were first introduced years ago in Amazing Spider-Man. Reading between the lines of Bunn’s letter, he almost comes across as surprised and aggravated by Marvel pulling the plug, admitting that the series ends on a truncated note. I know you can never go into a creative endeavor thinking you’re about to get cancelled/defunded, but Bunn’s attitude, and eventually his resolution to a series that has went on for 42 issues, comes across as incredibly naïve. 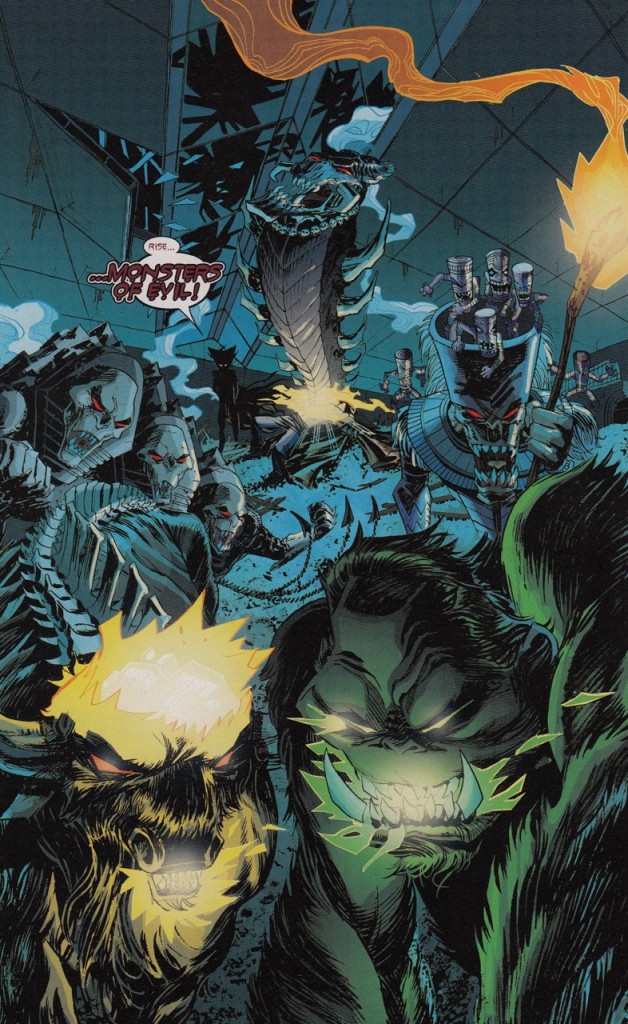 What’s additionally unfortunate about how Venom ended is that beyond the one satisfying Flash moment, I now have lost all connection and engagement with the character. With Slott threatening to kill Flash or the symbiote off in his upcoming Superior Spider-Man storyline, I find myself thinking if I would even really care if one or the other (or both) were to happen. My guess is, neither does happen, but I’m fairly certain the symbiote and Flash are separated forever, and going forward, Venom gets the Carnage treatment where he gets dusted off for an annual event or mini-series that varies in quality depending on the creative team.

While I would be totally fine with that development if it came to fruition, it also makes me sad. This Venom series marked the symbiote’s most successful solo run, and outside of a couple of exceptions, did not rely on guest appearances from the likes of Spider-Man or Wolverine to boost its popularity. Considering Venom was the supervillain that helped make me fall in love with comic book medium, I was ecstatic that Marvel had hit upon a somewhat successful formula, and the fact that they were doing it with a long-time Spider-Man supporting cast member as the lead, was a double bonus.

But that’s all in the past, and Venom is now just another casualty to the sometimes struggling, sporadically robust comic book market. I guess this post is meaner in tone and spirit that I had originally anticipated, but it’s always frustrating to watch something with promise sputter and eventually fail. I’m not going to pretend I have the next great Venom-centric pitch at my fingertips, but I can say with certainty that I hope it is the polar opposite in tone and theme from what we’ve got over the past year.