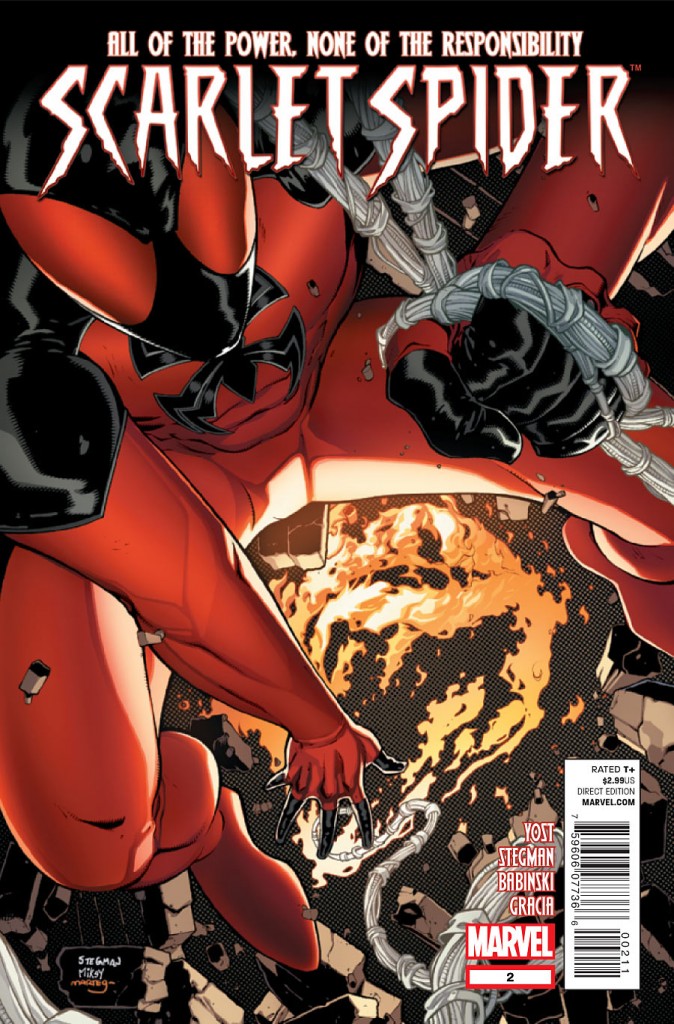 Geographic location in a comic book series seems to be such an afterthought these days, especially when the vast bulk of Marvel series take place in or around New York City. So when it was revealed that the new Scarlet Spider series was going to be set in Houston, I was very curious to see if this was an intentional choice by Marvel or more of a “let’s throw a dart at a map of the United States and see where it lands” approach. It’s hard to get a firm ruling just two issues into this series – which has been quite excellent regardless – but evidence is mounting on the “intentional choice” side of the argument, which is now giving me a lot to look forward to with this comic. 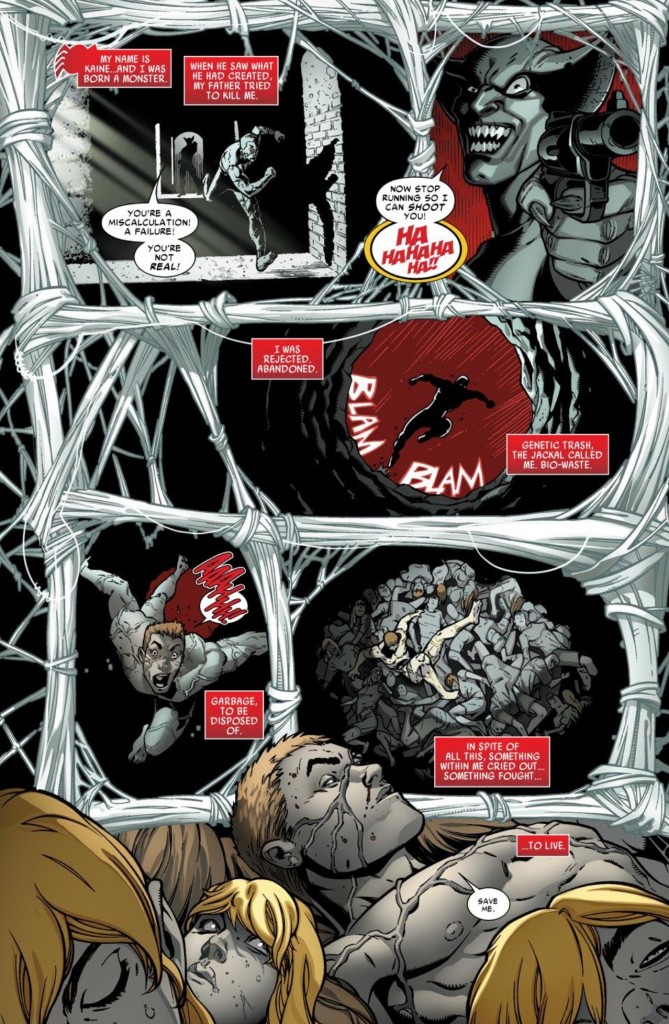 In issue #2, we see more of the groundwork being laid for what are ultimately going to be some of the prevailing themes of this series. Beyond the “all of the power, none of the responsibility” tag line that comic adopts on its front page, writer Chris Yost is really driving home the idea that Kaine is an unwilling and reluctant superhero – a man who sees himself as more of a genetic accident that a superpowered being who can use his abilities for good. In his fight with the fire-powered Salamander, Kaine practices significantly less restraint than his other half, Peter Parker, using a gun on his adversary and choking and strangling him. It obviously lends a significantly darker tone to the series, one that’s noticeably (and rightfully) absent from Amazing and Avenging Spider-Man, but there’s also some other interesting things developing beyond Scarlet being some kind of “bizarro” ASM. That’s where the geographic setting of this location becomes significant. 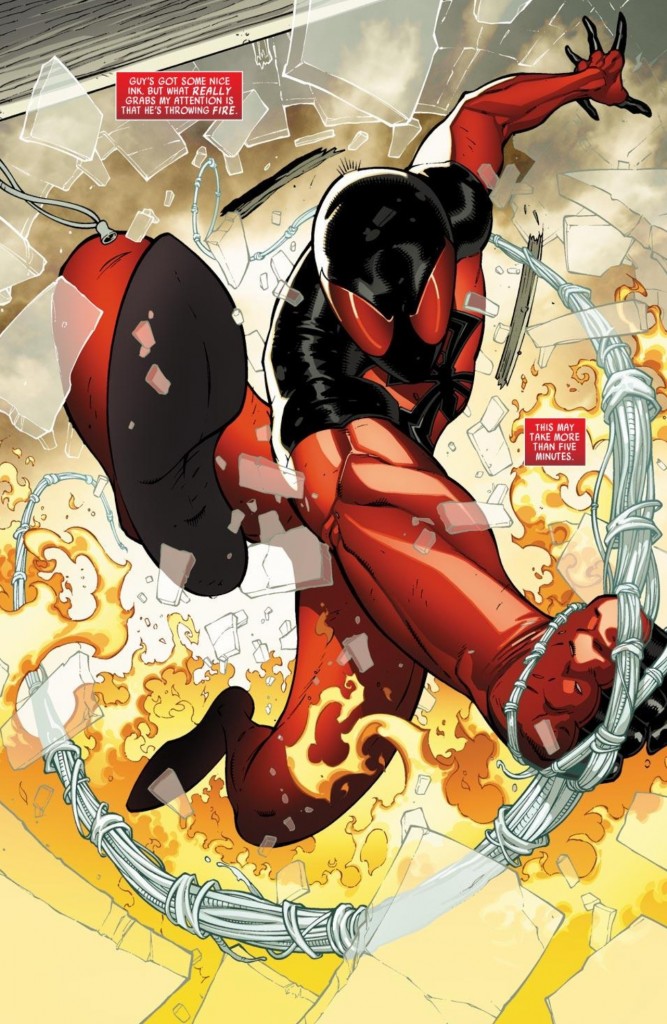 By the end of issue #2, Kaine is asked to hang out in Houston since the city doesn’t have a superhero to call its own, and he accepts the offer as a way to atone for his past villainy. But with a shades of grey character like Kaine, I just can’t shake the sense that he’s not really looking to protect the everyday people of Houston. There’s no way I believe he’s going to patrol the streets and protect institutions like Houston’s government or the Houston PD. To borrow the term from the Occupy Wall Street movement, Kaine does not care about the one percent. There’s a very specific, overlooked subset of the population he’s going to look out for – and as a city, Houston has enough of this subset to go around. 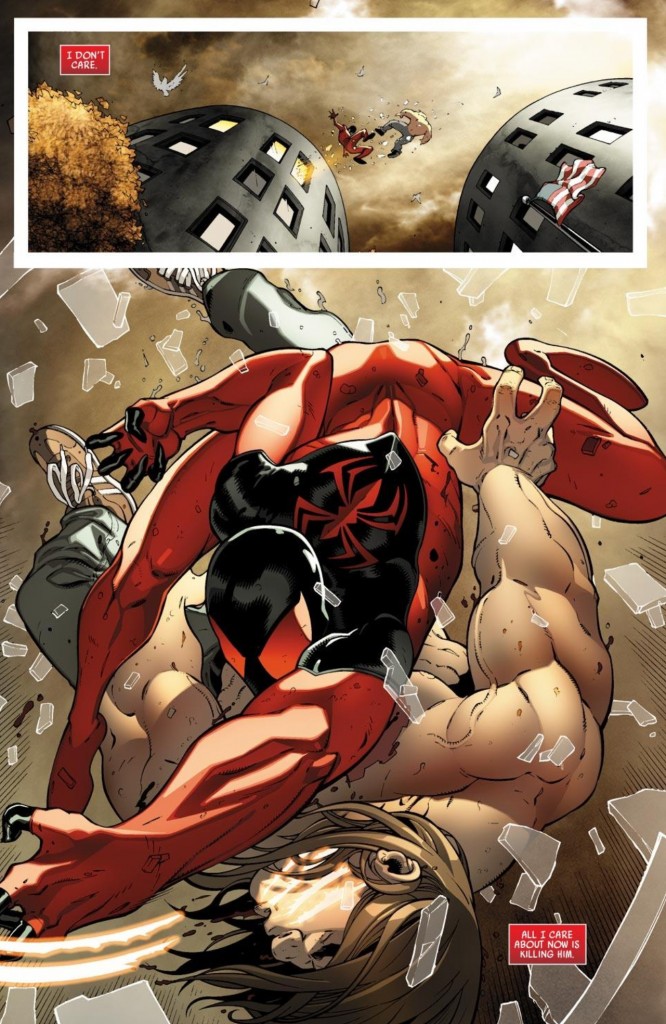 Being so close to the Mexican border, I have to believe that Houston was chosen as a way for Kaine to defend the city’s large and ever-growing immigrant population (legal and otherwise). Maybe after recently enjoying a marathon of Breaking Bad, I have too much of the ABQ and its drug wars with the Mexican cartel on my brain, but that show also demonstrates the potential of setting a crime drama outside the prototypical Northeast metropolis like New York or Boston. The Southwest provides an entirely new dynamic for writers to take advantage of, and quite bluntly, it just makes sense to transform a reluctant and discarded hero in Kaine into the champion for Houston’s “underground” population. 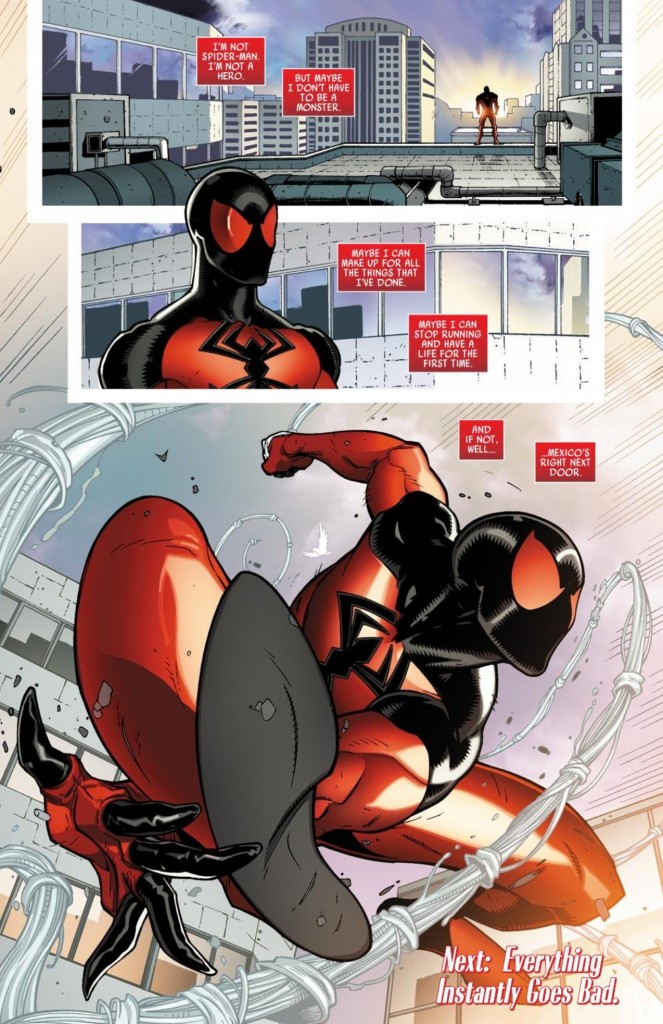 If Marvel is indeed going in this direction, then I think this is an even more effective way to “colorize” its comic book universe than the introduction of Miles Morales in Ultimate Spider-Man last year. Granted, I haven’t been reading much USM since the relaunch, but I don’t get the sense that Miles’ race plays a critical role in the storyline. Houston can be a real playground for Chris Yost and Ryan Stegman with its ethnically and economically diverse population. A host of villains can be created just from the strong influence the Mexican drug cartels have on the city. Again, maybe I just have too much “Heisenberg” on the brain, but after spending the past few months of my life getting sucked into characters like Tuco, Tio, the ax-wielding cousins and Gus Fring, having a “shades of grey” hero like Kaine play a part in this gritty underworld, defending those who may be otherwise defenseless from those on the “up and up” of society, would be fascinating comic book goodness from my end.

Yost has been on record that Houston will start becoming more of a character in the next issue, so I’m making an educated leap that we’ll learn more about what kind of adversaries Kaine will face going forward and what component of the population he will ultimately defend. And that’s when we’ll see if geographic location really makes a difference or if the end result is New Yorkers with cowboy hats.