This next reader request comes from Matt Little, co-host of the fantastic Matt and Brett Love Comics podcast (which I appeared on a few months ago). Actually, for full disclosure, I solicited Matt on this one because I knew it was a favorite of his and I thought it would make for a good feature:

The storyline in question is actually a rather sprawling saga that took place over the course of Spectacular Spider-Man #143-157 and Web of Spider-Man #47-55. I’ve seen the arc listed as both the “Lobo Brothers Gang War” and the “Trial of Robbie Robertson.”

I talk so much about how much I love Spider-Man’s supporting cast, but this lot of issues from 1988-1989 really demonstrate how dynamic a comic book universe can be when it can effectively weave in “B” stories that are entertaining despite not prominently featuring the main superhero.

For Spider-Man, the “Lobo Brother’s Gang War” arc is a traditional “gang war” storyline that features Spidey stepping in the middle of a violent turf battle between Wilson Fisk, aka the Kingpin, in New York, and Eduardo and Carlos Lobo from Houston, a pair of homicidal mutants who can turn into werewolves. Ever the opportunists, longtime Spider-Man “B” listers Hammerhead and Chameleon, use the gang war as an excuse to stake their own claims to the head of the New York City underworld. 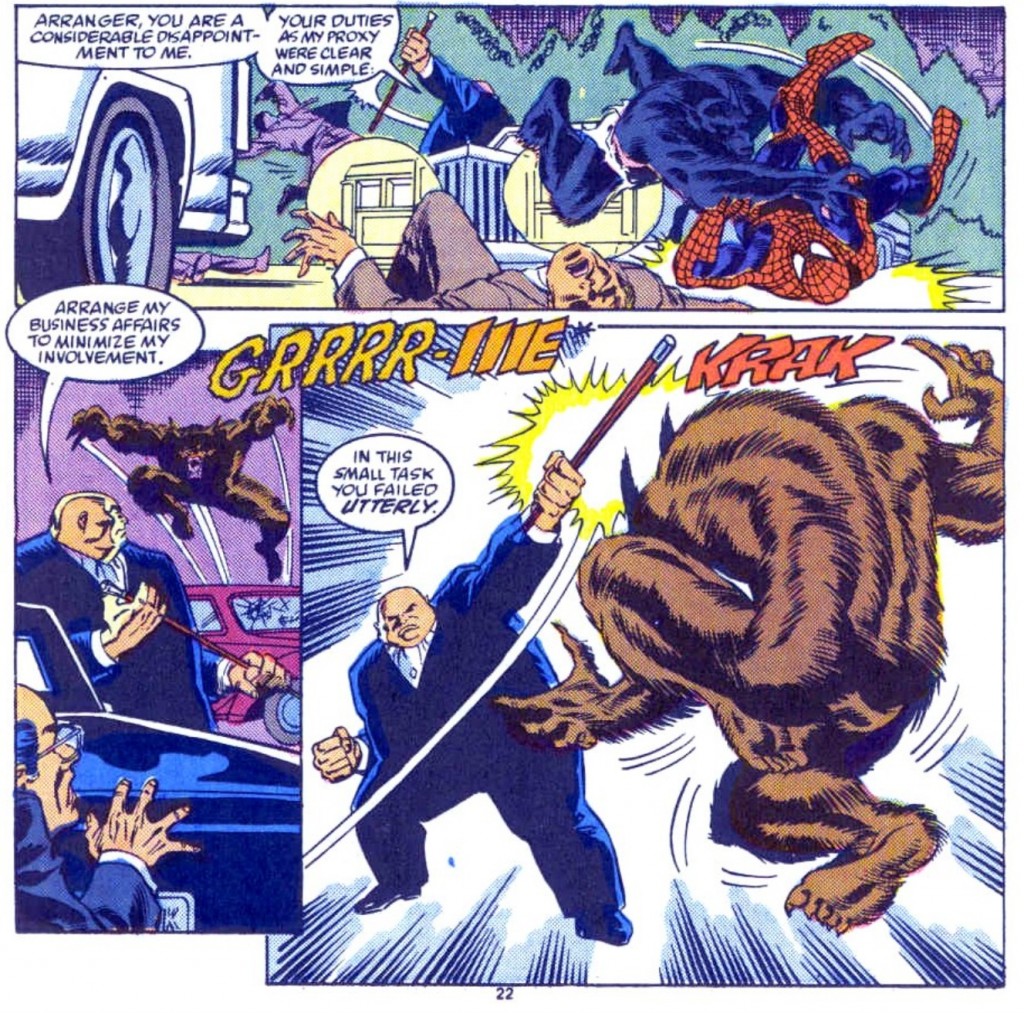 It’s a fun story, scripted across both titles by Gerry Conway, with pencils from Sal Buscema on Spectacular and Alex Saviuk on Web Of, but it’s the “B” stories involving Joe “Robbie” Robertson, Glory Grant and J. Jonah Jameson that elevate this very drawn out arc into something that is often overlooked when discussing some of the better Spectacular stories over the years. In fact, I’d go as far as to say that Conway/Buscema/Saviuk were producing better quality stories than the more ballyhooed David Michelinie/Todd McFarlane tandem on the “main” book, Amazing Spider-Man. While I often talk quite nostalgically about the Michelinie/McFarlane run, outside of a few truly excellent issues, the bulk of the stories they produced were totally forgettable. Give me the “Lobo Brothers Gang War” over Peter Parker’s “Webs book tour,” Jonathan Casesar stalking Mary Jane, or the “Assassin’s Nation Plot” any day.

Robbie’s characterization throughout this arc is especially rich and complex. In these issues, Robbie is sent to prison for failure to report a crime after coming forward with information about a murder committed by his high school classmate Lonnie Thompson, aka, the gangster Tombstone, 20 years after the fact. During his trial, Robbie has already accepted his defeat and imminent prison time because of the immense guilt he feels for obstructing justice because of his personal fear of Tombstone. In many ways, this is Robbie’s “Uncle Ben” moment, except he’s so emotionally battered by the ordeal, he embraces the idea that’s it’s his responsibility to serve prison time as a criminal (despite the fact that he only committed a crime because he justifiably feared for his life) rather than use his guilt and loss to do something heroic, the way Peter does in the aftermath of Amazing Fantasy #15. 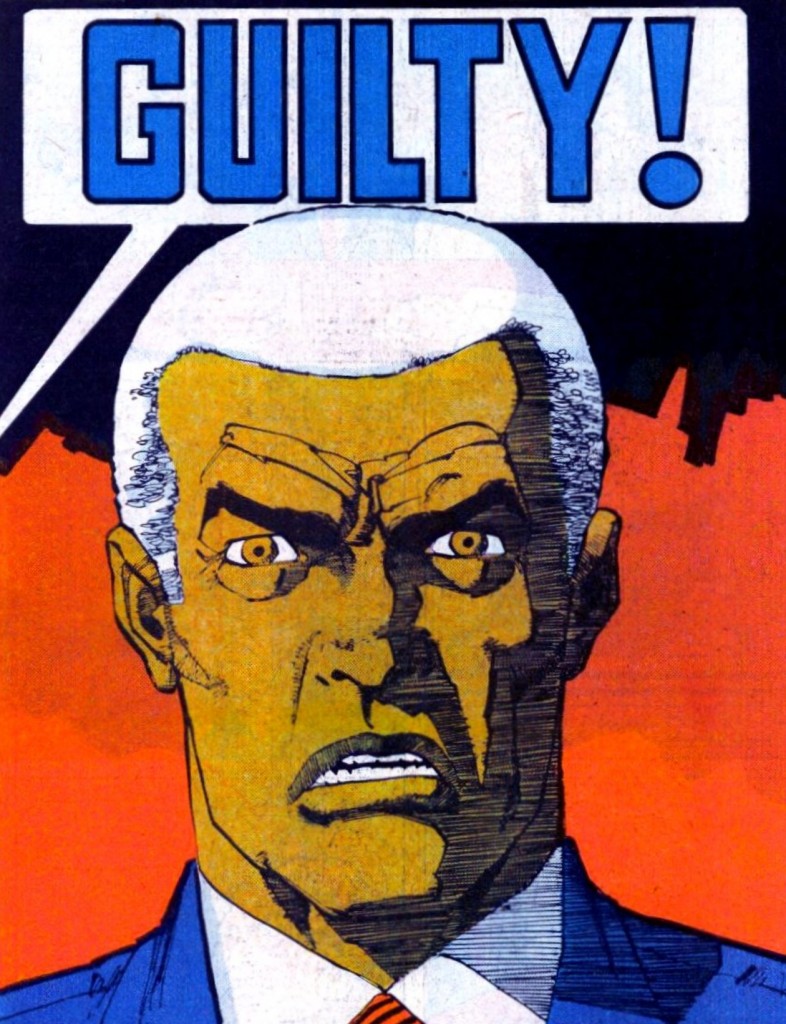 Of course, the screws turn even more for Robbie as he gets to prison and in the cell next to him is Tombstone, promising to make his life a living hell (not to mention threatening very violent retribution for squealing on him for his murder 20 years ago). 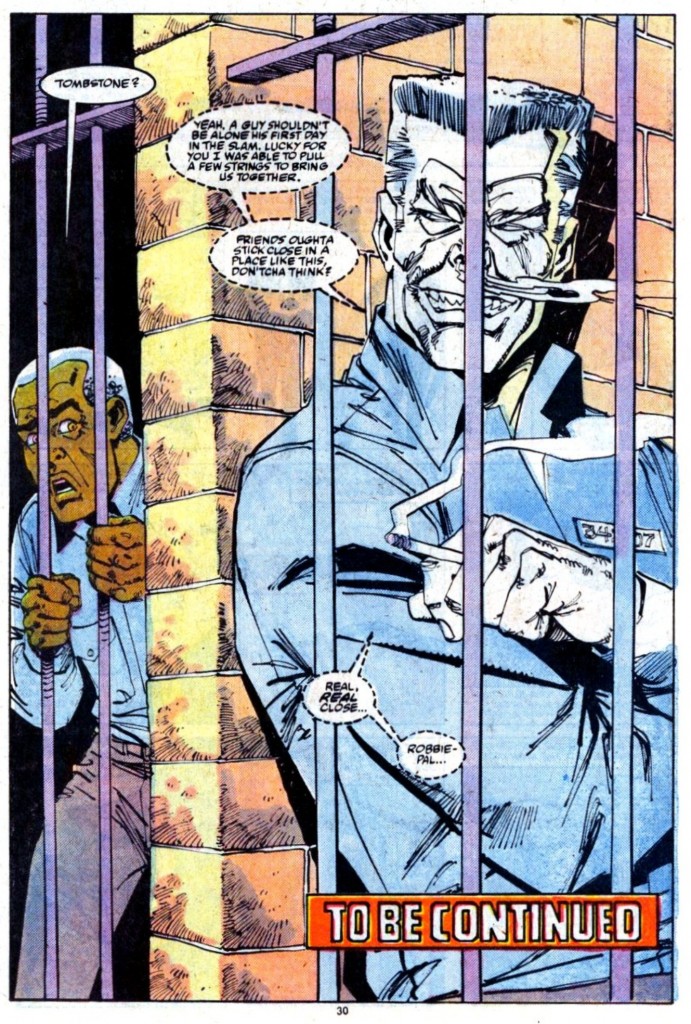 There is something so absolutely maddening about Robbie’s disposition throughout this arc. As city editor of the Daily Bugle, Robbie has always been a perfect, even-keeled balance to Jonah’s bluster and bombast, but he’s also carried himself with a quiet sort of pride. In a comic book world filled with “shades of gray” characters, Robbie has always unquestionably done the right thing, so watching him circle the drain while living out a nightmare where his high school bully continues to torment him (including a real gut-wrenching Spectacular #153 when a muscle-bound advocate of Robbie’s, Brusier, is mercilessly killed by Tombstone’s goons) is both incredibly sad, and engrossing. 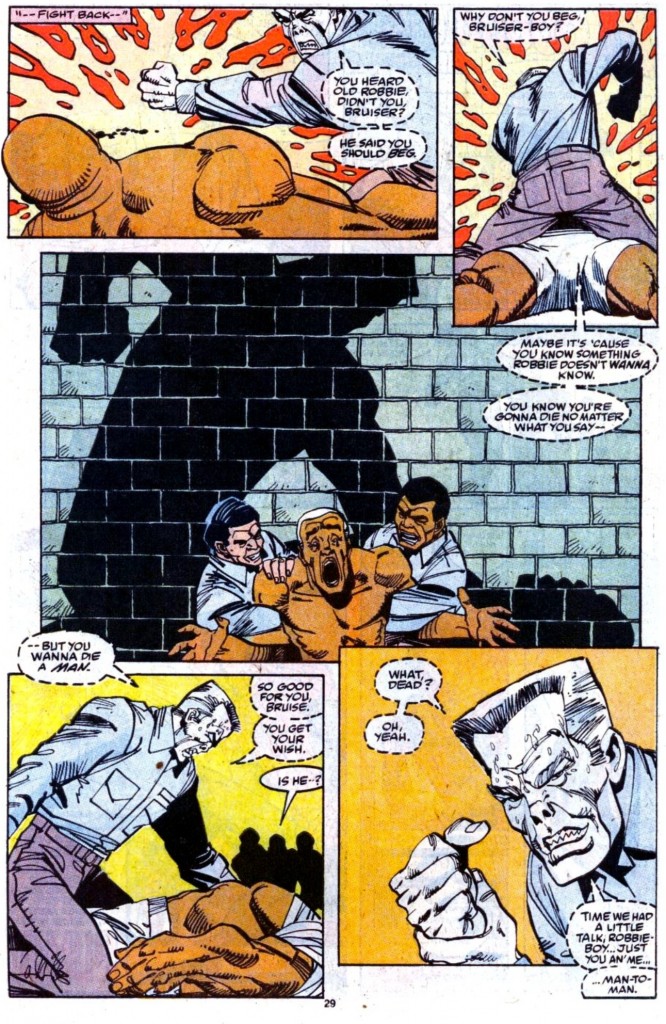 Fortunately, Robbie has a fantastic moment of redemption where he finally snaps and stands up for himself with Tombstone. During a chaotic prison break orchestrated by “some guys” Tombstone knows on the outside (in turns out to be Hammerhead and Chameleon), Robbie and Tombstone are being airlifted out of the prison when Robertson decides to grab hold of his tormentor and drag the both of them down to the ground below to their potential death. The duo land outside Amish Country, PA, badly damaging Robbie’s leg in the process. Tombstone waits for Robbie to heal before confronting him again, but Robbie proves his moment of suicidal courage on the helicopter wasn’t a fluke, and stabs the gangster in the chest with a pitchfork, FINALLY sending his old pal Lonnie away. 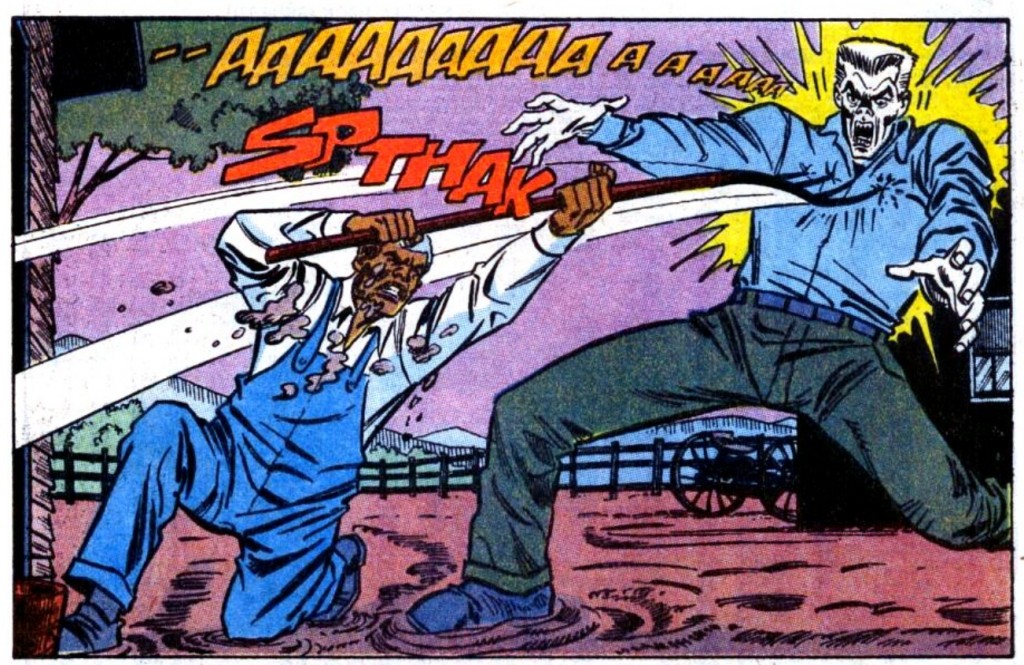 I challenge my readers to think of a more compelling Robbie story than this one. Especially given the time Conway gives this arc to develop and evolve, we get to see the best and worst of Robertson over the course of his trial and eventual vindication against Tombstone. It’s one of those stories where I find myself screaming at Robbie for being so weak-willed, fearing for his life as Tombstone’s master plan goes into effect, and then cheering Robbie vociferously at the end.

Glory’s role in these issues isn’t nearly as “cheer-worthy,” but it’s without question the most time and attention a Spider-Man writer has given the character since her initial introduction as Peter’s fun-loving neighbor during Conway’s run on ASM in the 1970s. 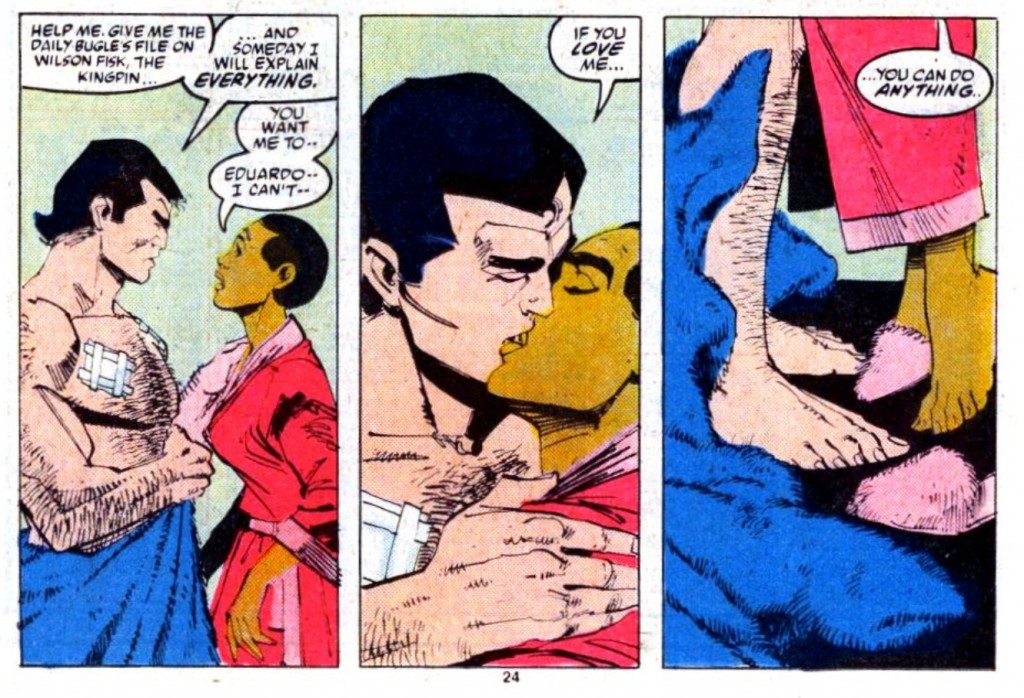 In this arc, Glory ends up playing a critical role in the escalation of the Lobo Brothers/Kingpin feud when she steals the Daily Bugle’s file on Fisk at the request of her new boyfriend, Eduardo Lobo. Similar to Robbie’s predicament with Tombstone, Glory comes across as being powerless in her relationship with Eduardo. But despite the fact that she knows Eduardo’s a criminal (and a mutant werewolf), she also realizes the heart wants what the heart wants and she can’t fight the love she has for this awful man. 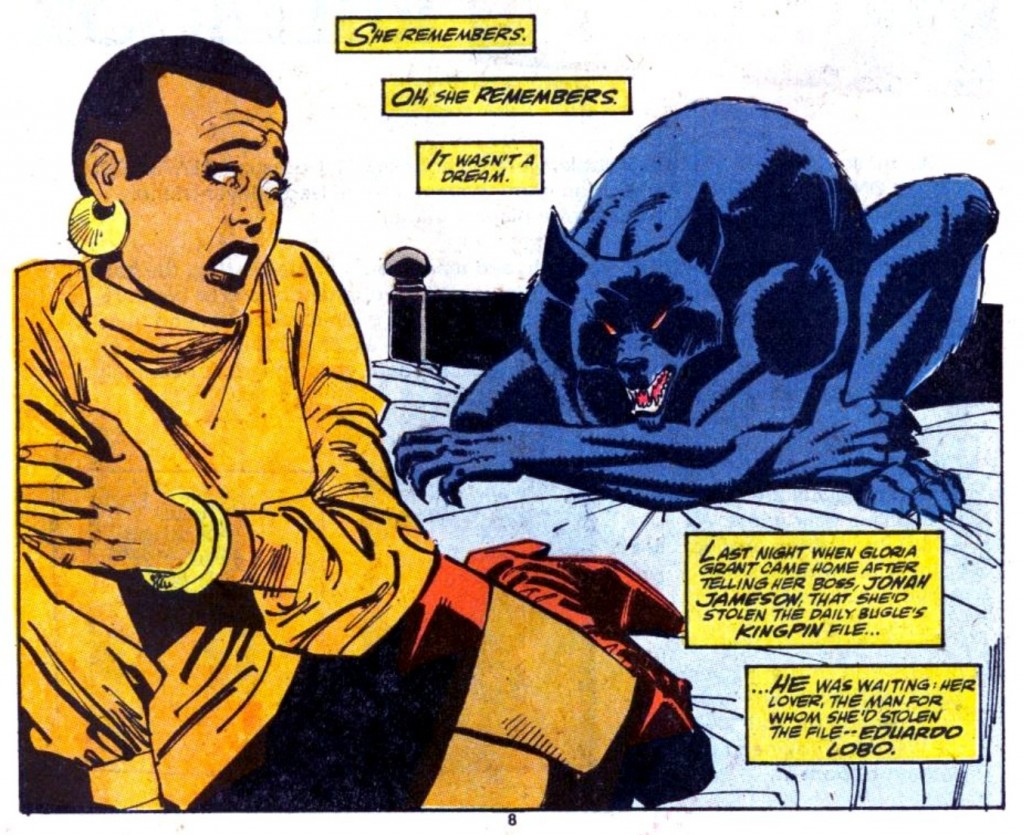 In a pivotal scene that demonstrates how Peter’s social aloofness can sometimes lead to him making irresponsible choices, MJ asks her husband to talk to Glory about her problems with Eduardo. Peter plans on using his long-time friendship with Glory from the “Chelsea apartment days” as leverage, but she opens up to him without him needing to pry. But Peter has no idea how to respond, and bolts on Glory to meet MJ, offering his friend a “tired cliché” about her situation that helps no one. 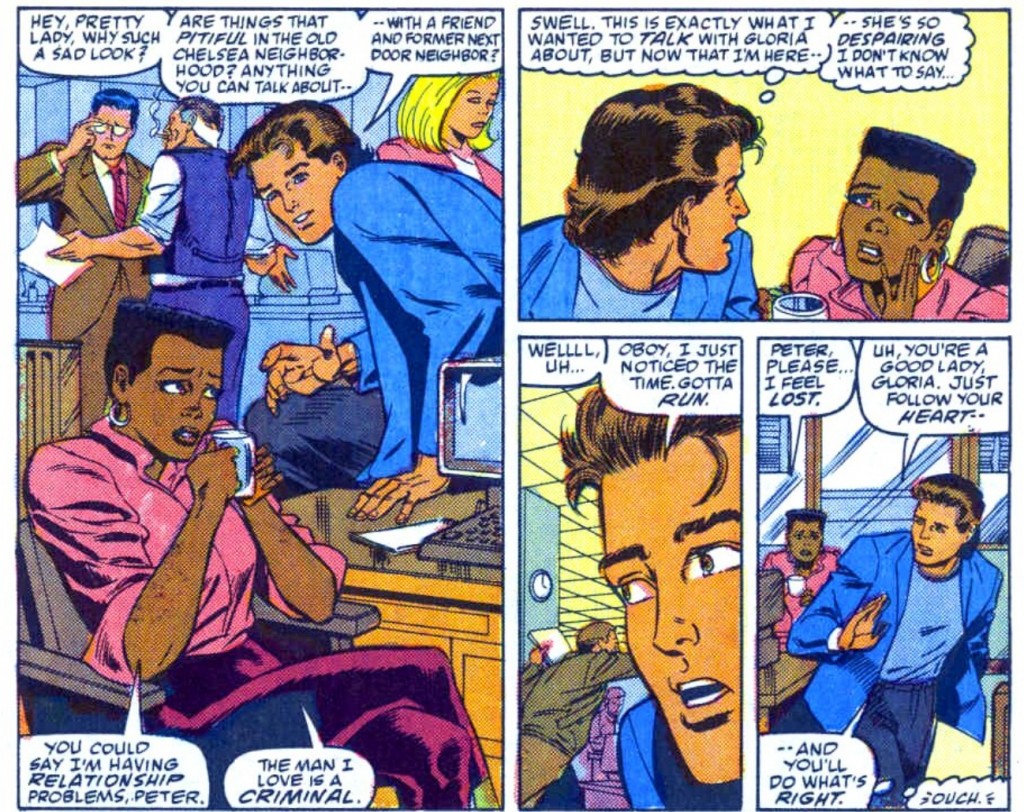 While it’s arguable whether or not Peter could have truly changed the course of events for Glory, his inability to connect with her leads to some fatal results. Glory remains conflicted about her lover, and during a melee between the Lobo Brothers gang and Kingpin’s crew, Glory shoots Eduardo (in wolf form) while he’s battling Spider-Man. Spidey thanks Glory for her heroism, but she tells him she was actually aiming for him, and is now totally destroyed by the death of Eduardo. 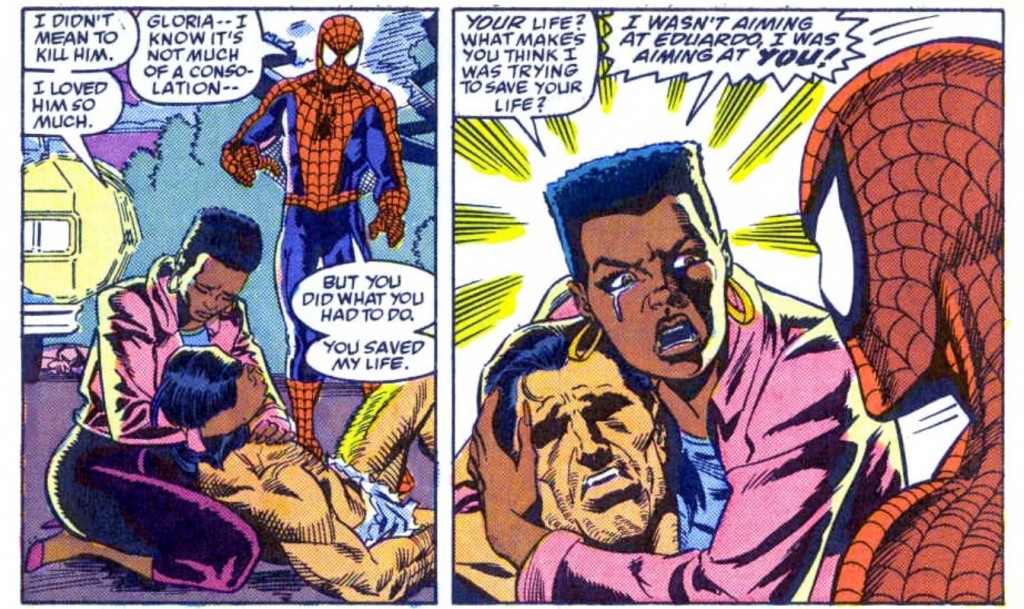 It’s a painfully tragic interaction between the two, especially because Spider-Man can’t just pull off his mask and come clean to Glory. Instead, he now has another close friend who thinks Spider-Man is a menace and the scum of the earth.

The J. Jonah Jameson subplot that exists throughout the “Lobo Brothers Gang War” arc, is far from the “greatest” JJJ story to ever be told, but is a fairly unique one that features on specific issue that echoes some of the themes found in the epic (and just recently written about via a reader request) “I Cover the Waterfront.” Web of Spider-Man  #52 focuses almost exclusively on Jonah as he attempts to escape the penthouse apartment of the Chameleon, who is impersonating the Daily Bugle publisher in an effort to advance his personal agenda in the larger gang war between the Lobo’s and Kingpin. 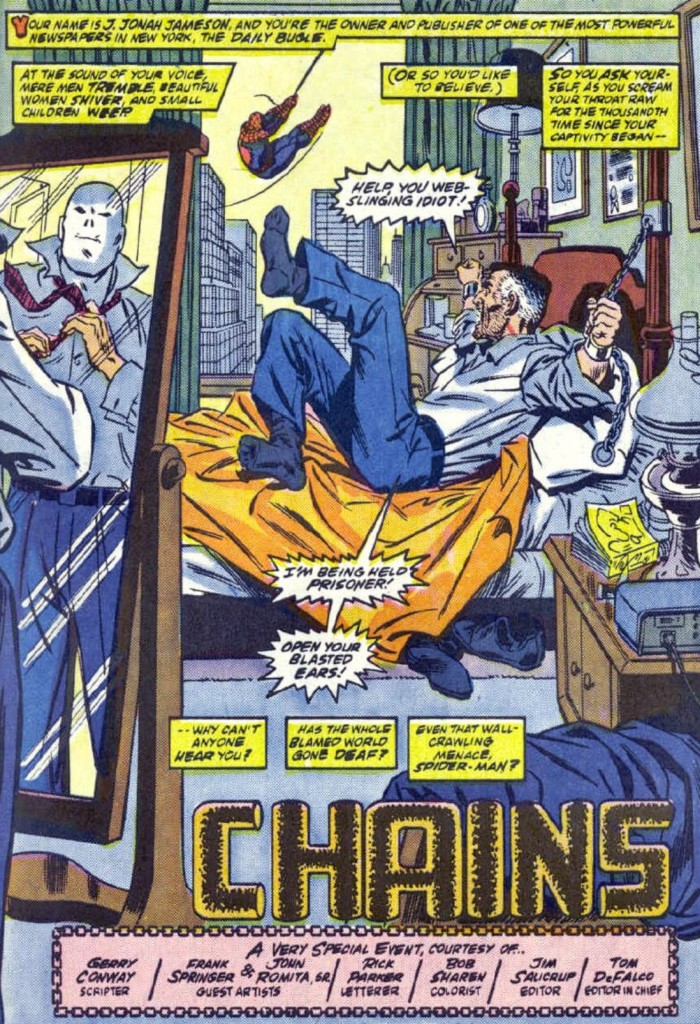 Like “I Cover the Waterfront,” Web of #52 shows Jonah reflecting on his younger days as a dogged reporter looking to root out a police corruption scandal. However, similar to the “Uncle Ben moments” experienced by Robbie and Glory, Jonah past decisions haunt him. In his effort to track down evidence that would help him break the police corrutption story, he inadvertently sends an innocent young man into a booby trapped locker that kills him. Still, despite the awful guilt he experiences for the man’s death, Jonah pushes on, and eventually tricks the crooked cop into confessing via a wiretap. 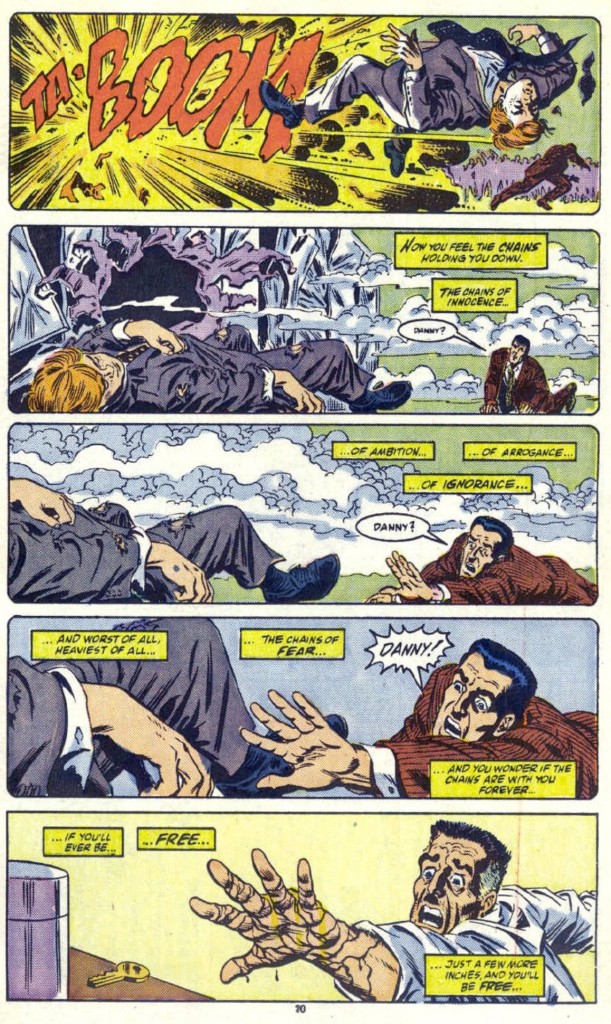 Jonah draws on his perseverance from his younger days to break a mirror and cut his way free from the ropes the Chameleon uses to bind him (bloodying himself to  boot). However, just as he’s on the verge of escape, Chameleon, like a serial killer in a horror movie, shows up at the door and stops him. 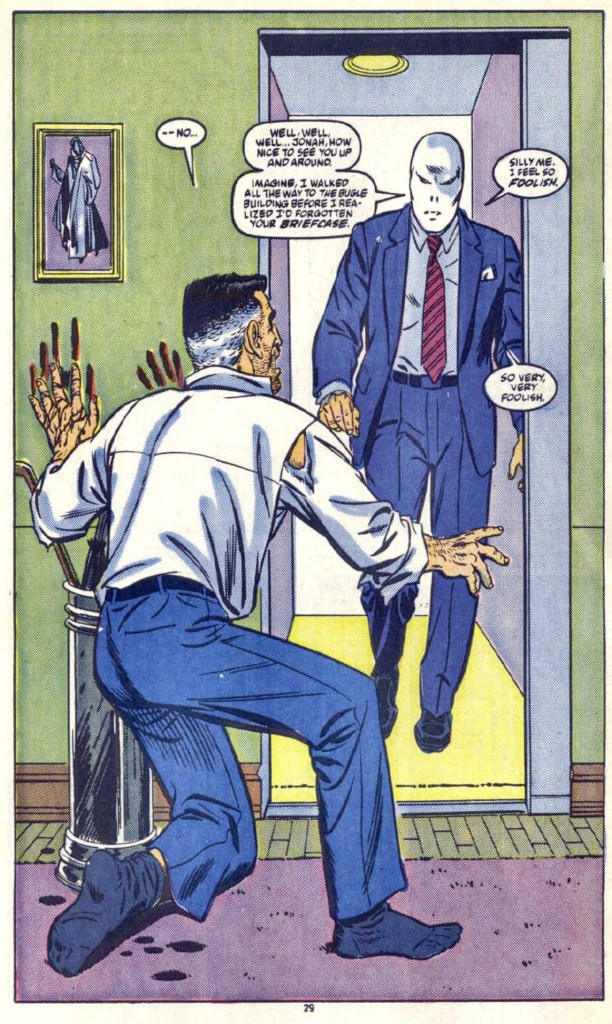 This might be my favorite individual comic in this run of Spectacular and Web of issues. It’s yet another instance of a creator going out of his way to make Jonah a more complex and sympathetic character (if you thought JJJ was always hard on Spider-Man with his headlines, you should see what the Chameleon was up to during his stint as editor-in-chief). Plus the ending with the Chameleon is so terrifying and disheartening, yet absolutely on-the-nose realistic (it’s not like he shows up out-of-nowhere. It’s his penthouse and Jonah has clearly been struggling for hours to escape). It’s a great demonstration that a “good” story isn’t always a happy story (Conway seems to specialize in those).

With so many balls being juggled during this “Lobo Brothers Gang War” arc, it’s not a shock that a couple of them fall to the ground in awkward fashion. While Robbie, Glory and Jonah all shine, we get a borderline “made for TV special” story with MJ’s teenaged niece Kristy, a bulimic that is hospitalized after having a heart attack (nothing against this very real issue, but having Kristy practically stalk Peter just feels icky). These issues also saw the rise of storyline prominence of rival Daily Bugle Nick Katzenberg, who is basically a much meaner, scummier version of Lance Bannon, rival photographer during the Roger Stern/Tom DeFalco days on ASM. Neither storyline does much for me, and in many ways detract from the meatier arcs involving Robbie, Glory and Jonah.

Still, even with the occasional misses, I can’t credit Conway enough for taking two Spider-Man titles, and rather than focusing on “B” stories involving the “Web Slinger,” using these comics as an opportunity to develop some underused characters. As ambitious as a storyteller as Dan Slott is, I can’t see him ever dedicating so much ink to a supporting cast member. “The Lobo Brothers Gang War” arc will never be in the “pantheon” discussion of best-ever Spidey stories, but it’s totally an example of how a different approach to a comic book series that doesn’t seem to have the eyes of the world on it (like Michelinie/McFarlane’s ASM run) can produce some quality stories.