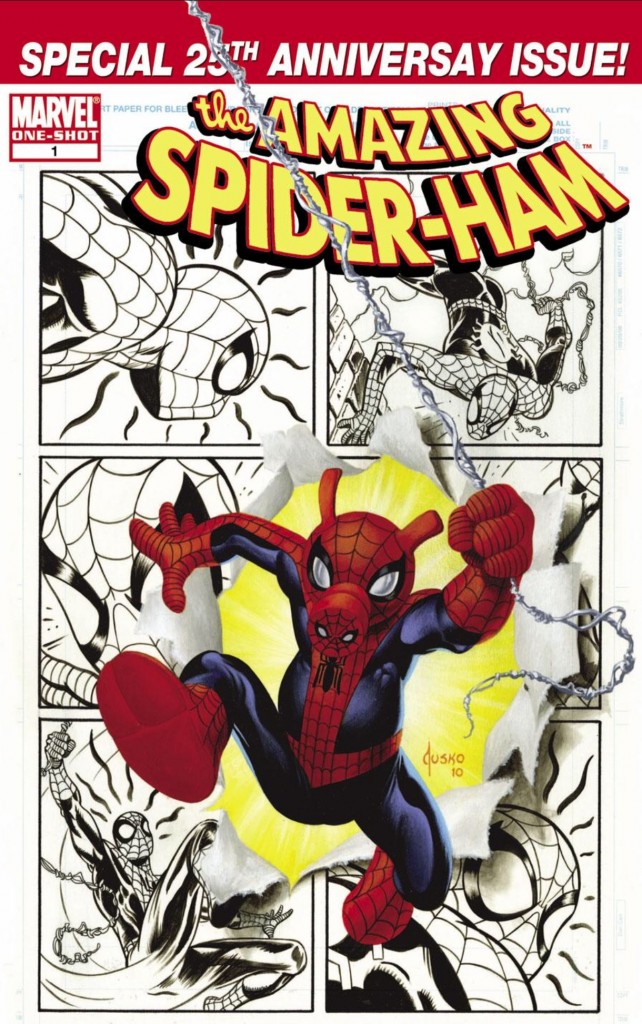 I’m as big of a fan of satire as it gets, yet I have to sheepishly admit that I really don’t know whether or the not the involvement of Peter Porker, the Spectacular Spider-Ham (as he’s commonly known) in the upcoming “Spider-Verse” event is something to be excited about.

I definitely feel like I’m going to be inspiring some venom-fueled e-mails, tweets and blog comments by going after Spider-Ham, but I’m willing to take that risk in order to demonstrate my overall indifference, and perhaps, obtuseness to the greatness of this very jokey comic book creation (I hesitate to call him a “character”).

For purposes of this post, I thought I’d use the Spider-Ham 25th Anniversary one shot from 2010 as a focal point of discussion, not because I think this is the best representation of Spider-Ham, but because it’s one of the only comics that he’s so prominently featured in that I have access to. I know I definitely purchased a few Spider-Ham comics when I was a kid in the 80s, but those are either lost, destroyed or both. And because these comics were published under Marvel’s “Star” imprint, they’re not available on the Marvel Unlimited app or as single issues on Comixology. So, Spider-Ham 25th Anniversary it is! 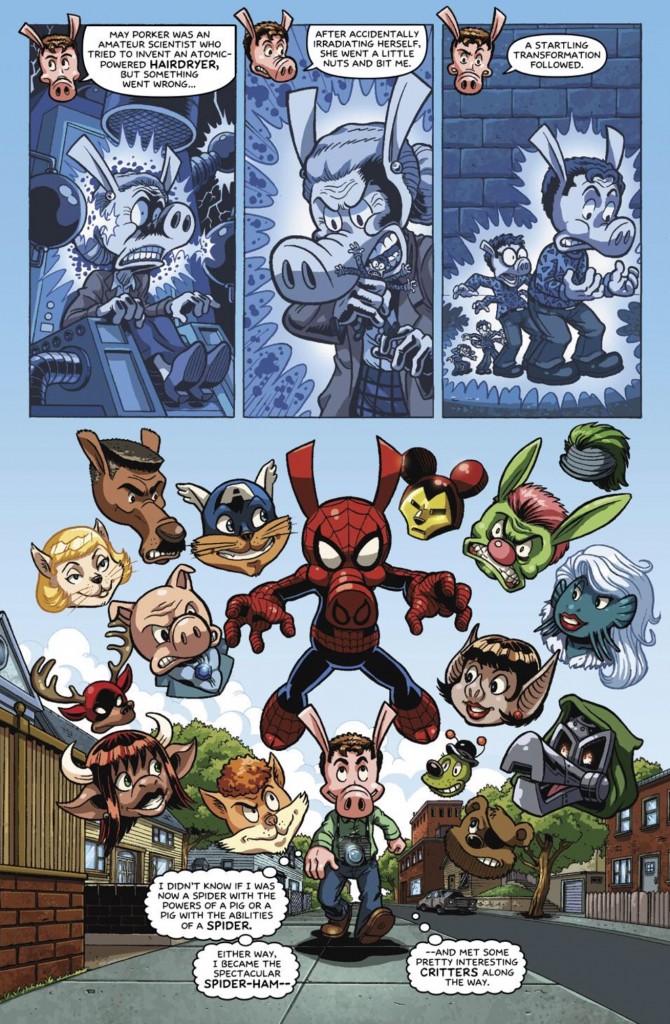 Actually, the 25th anniversary one shot is not a terrible comic by any stretch – certainly not if you’re a fan of Spider-Ham – and it’s even written by the “legendary” Tom DeFalco (who created Spider-Ham) so, on first blush, you’d think this be right in my wheelhouse. But after a bunch of puns on character names, like J. Jonah Jackal, Doctor Octopussy, Captain Americat and my personal favorite, the Swinester Six (which everyone in the comic rightly points out is not even a really word), it’s not entirely clear what this comic is attempting to accomplish. I love to laugh, and comics are supposed to be fun (even the high-brow ones), but I fail to see the value in just stuffing as many puns into a comic that a writer can think of.

To give the comic, and the writer, some credit, I do appreciate how DeFalco works in some callbacks to the original Spider-Man vs. the Sinister Six story in Amazing Spider-Man Annual #1 (it doesn’t hurt that he’s paying homage to one of the greatest Spidey stories of all time). There’s an ongoing bit in Spider-Ham 25th Anniversary where Aunt May (Porker) keeps acting all impressed with Doctor Octopussy’s manners despite the fact that she and Mary Crane are being held hostage by the Swinester Six. That’s a direct riff on the same subplot in ASM Annual #1. As an added treat, May Porker ends up being a colossal clutz in this issue and spills some hot coffee all over her polite kidnapper. 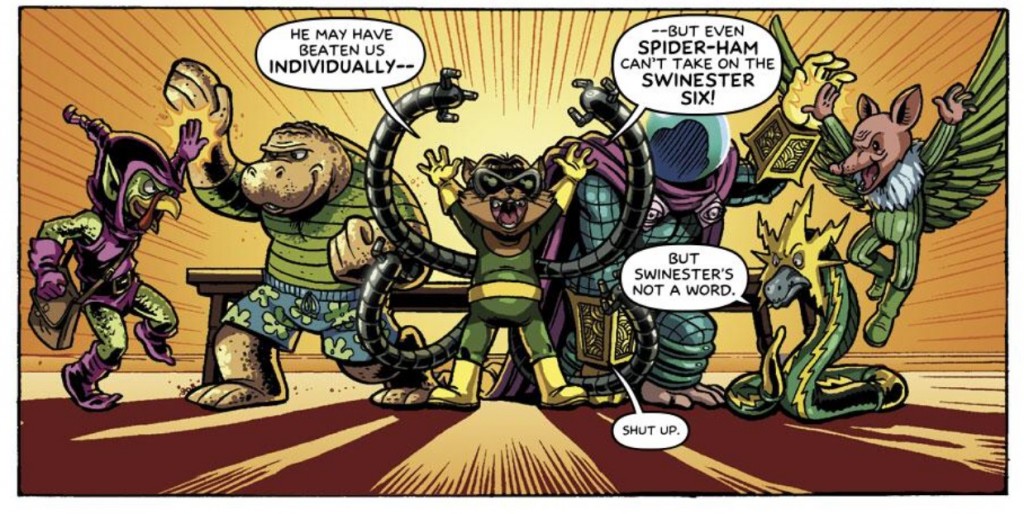 There’s also a somewhat funny spoof on “Kraven’s Last Hunt” as the one shot’s “B” story involving another DeFalco invention (Spider-Ham-isized) with Swiney-Girl and her adversary, Crayfin the Bunter.

And that’s ultimately the rub with this comic and basically all Spider-Ham stories. I get that look of delight on my face when DeFalco or whoever unveils another pun-derful name, and then I go back to the story and realize there really is no story. I take a look at these characters and realize there’s absolutely nothing to them beyond spoofs and puns. Is Doctor Octopussy an evil genius who wants to take over the world but often lets his arrogance and ego get the better of him? Or is he just a cat in Doc Ock’s green and yellow costume with mechanical arms? 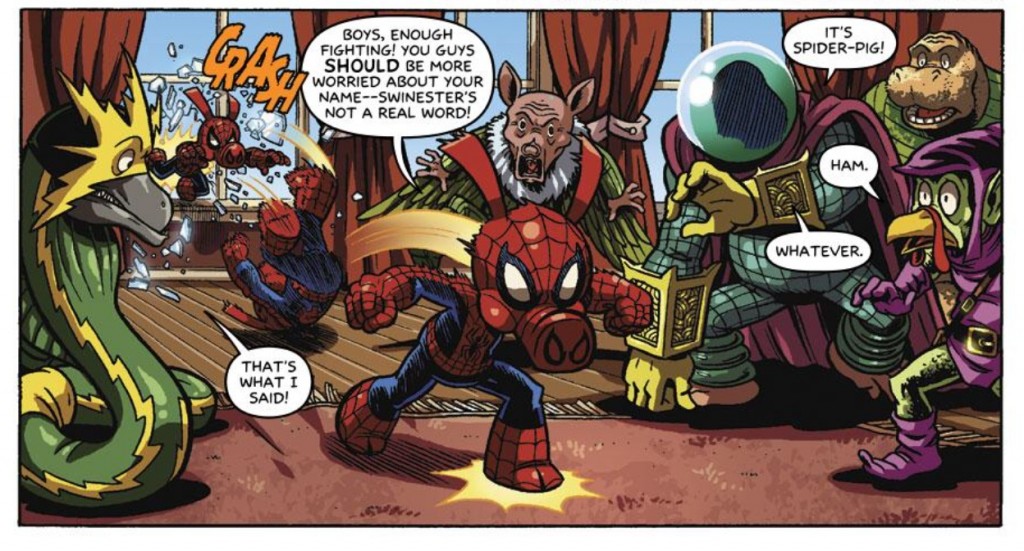 Yeah, yeah, this ain’t supposed to be Shakespeare, and I’m an idiot for even suggesting that it should be, but there’s no rule that says satire can’t lead to riveting characters and quality content. Stephen Colbert has made an entire career out of spoofing bombastic cable television hosts, and the net result is one of the smartest, most informative news programs out there. Almost every single word that came from the pen of Mark Twain was social satire of some kind. In other words, give me more than just animal puns.

The only reason why I’m even bothering to rain on the Spider-Ham parade is because when “Spider-Verse” was announced earlier this year, one of the most talked about alternative Spider-Man in that gorgeous collage by Gabrielle Dell’Otto was Peter Porker. There was definitely a fair bit of fist pumping when this guy appeared in Edge of Spider-Verse #5, and he’s already been confirmed as being part of a Spider-Verse Team-Up issue. And I can guarantee you that the bulk of that comic is going to consist of jokes about J. Jonah Jackal and some villain that’s actually an animal. Maybe Morlun will actually be a vampire bat in this comic? So that means, I’ll elicit a few cheap chuckles while reading that comic and then promptly forget about it unless Morlun kills the pig in some kind of spectacular fashion (don’t put it past Dan Slott!). 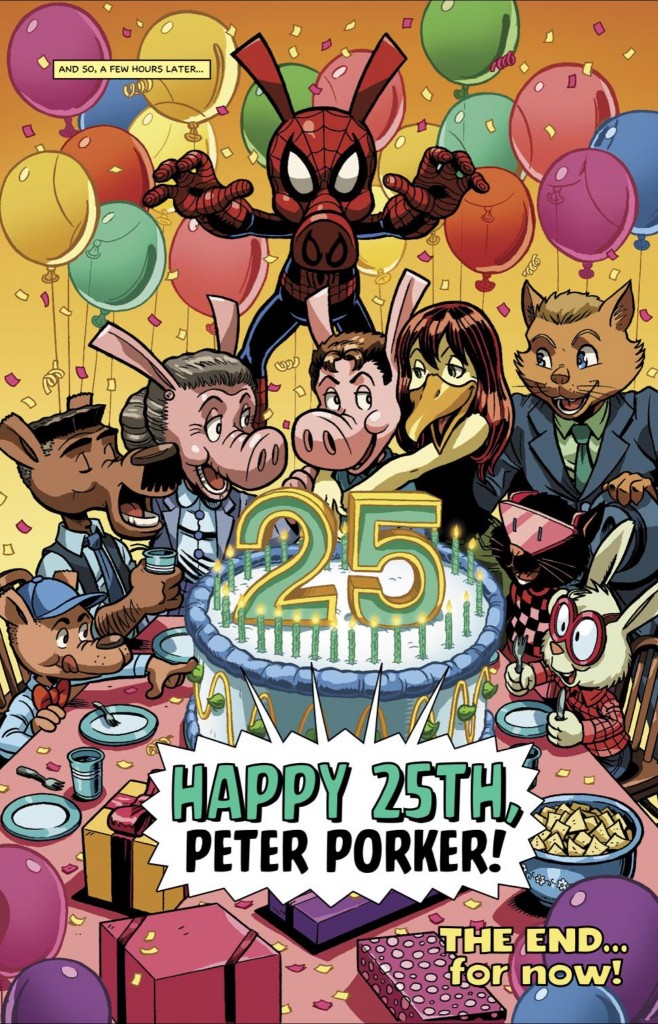