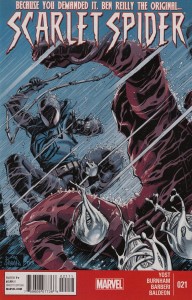 Despite the issue being heavily promoted as the “return of Ben Reilly,” I was on the fence about dedicating blog space this month to my thoughts on Scarlet Spider #21. I had stopped regularly writing about these issues last year, and outside of a specific story or plot development here or there, I thought I was better served dedicating my time elsewhere. But based on Marvel’s recent announcement that they will be canceling the title in December, coupled with the big reveal at the end of the issue (spoilers for a comic released three weeks ago from this point on) has put Scarlet #21 back on my front burner of issues to chat about, and moving forward, I expect I’ll post about the series until its cancellation in three months.

Whether it was planned this way or not, I really enjoyed the surprise reveal of Kraven the Hunter being Kaine’s actual adversary while the blue hoodie-wearing “old” Scarlet Spider, Ben Reilly, was nothing but a hallucination by our “hero.” Using Kraven for this issue and the next two, before transitioning to the series conclusion in Scarlet Spider #25, seemingly brings the Kaine character full circle after he was re-introduced three years ago as part of the “Grim Hunt” storyline in Amazing Spider-Man.

For those who weren’t reading in 2010, Kaine sacrificed himself to the Kravinoff family during “Grim Hunt” story (which ran in ASM #634-637) as part of a ritual that resurrected Kraven (who, of course, killed himself at the end of the epic “Kraven’s Last Hunt” arc in the 1980s). At the end of each of these “Grim Hunt” issues, J.M. DeMatteis, writer of the original “Kraven’s Last Hunt,” tackled a “B” story of an “untold” tale of Kraven where he first confronted Kaine. Between “Grim Hunt” and the JMD “B” story, an honest-to-goodness history between Kaine and Kraven was born, so it’s nice to see Scarlet writer Chris Yost and the rest of the creative team return to this relationship as it puts this current series out to pasture. 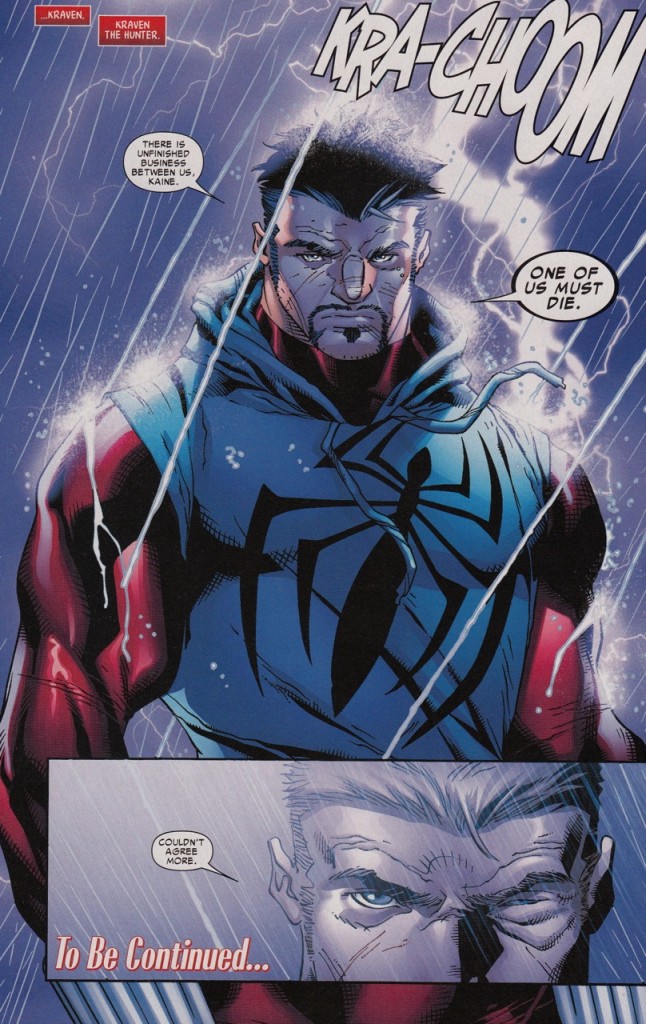 Using Peter Parker’s original clone, Ben, as the setup for the Kaine/Kraven confrontation, was a really slick move by the creative time, as it once again pays homage to Kaine’s history during the “Clone Saga” era. I find it funny that this once reviled era of Spider-Man history is slowly, yet confidently making a comeback and Marvel is doing such a fantastic job rolling it out. I had high praise for the “Sibling Rivalry” storyline in Superior Spider-Man Team-Up and Scarlet last month, which pulled its influences from the “Clone Saga’s” “Web of Death” arc (a storyline I found has aged quite well for me).

In terms of storyline progression and logic, there’s no better time than now to bring up the Kaine/Ben dynamic from the 90s. Throughout the “Clone Saga,” Kaine, the genetically damaged clone of Peter, stalked Ben (the “purer” clone) and tormented him. Since the onset of the Scarlet Spider series, Kaine has struggled with the idea of being a “hero” and having power AND responsibility, but has pushed onward towards a path of redemption (somewhat) anyway. With Kaine making some questionable decisions during the recent Wolverine arc, and then getting called out by his “brother” Spider Ock in “Sibling Rivalry,” Ben’s presence in Scarlet #21 is a stark reminder for Kaine that at his core, he is a damaged individual. The fact that Ben is not actually Ben makes his appearance in this issue all the better. By the end of the comic, the reader is led to believe that Kaine has hallucinated the whole thing (was he also hallucinating whether or not Kraven was wearing Ben’s old costume?). I find it fascinating that with his world spinning out of control, Kaine’s mind would revert to his relationship with Ben. During “Grim Hunt,” Kaine chastises Peter for not being able to separate himself from his “guilt” (certainly a defining characteristic of Peter), but in Scarlet #21, Kaine himself admits that he’s feeling overcome by that pesky Parker guilt. Again, I can’t say if it was intentional or not because it would seem like Scarlet Spider wasn’t slated to be cancelled when this issue was being produced, but the “guilt” sequence was just a fantastic callback to “Grim Hunt” and a great way for the creative time to tie Kaine’s story together in a way that’s befitting of a series “finale.”

Overall, was Scarlet Spider #21 does best is establish an aura of doom and despair. During his actual battle with Ben, Kaine is seemingly desperate to prove his worth both to his clone and himself. Meanwhile, for those who watched Ben disintegrate into a pile of goo during the 1990s, there was always a sense that this character fighting Kaine was going to be exposed as a dupe or fake somehow, but I was never exactly sure how Yost was going to get us there until the actual Kraven reveal. It also helps that seeing Kraven at the end was a fantastic way to counter what could have potentially been a frustrating bait and switch by Marvel. No, we didn’t get “Ben Reilly,” but instead we got one of Marvel’s greatest rogues and a character who has a legitimate issue with Kaine. 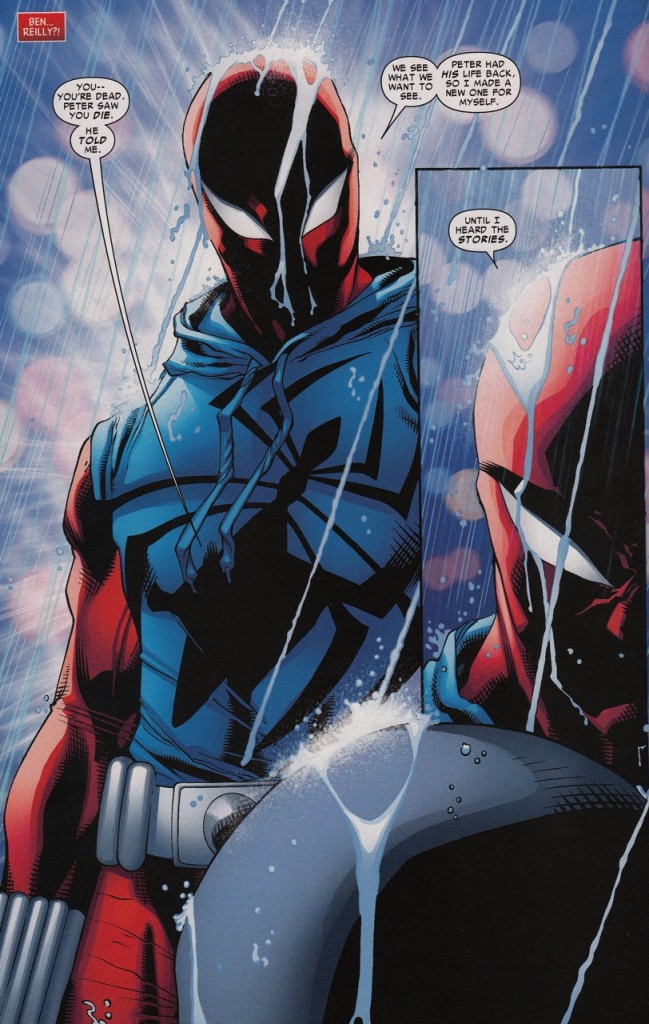 I’m sure I’ll have some additional random thoughts about Kaine and the Scarlet Spider series as it plows ahead to its last issue in December. Until then, let me just note that while I enjoyed this series more than most, I’m not the least bit surprised or dismayed by the cancellation. I can’t really say I ever expected the Scarlet Spider concept to last more than a handful of issues – in a crowded marketplace of comics, do we really need an ongoing title dedicated to Spider-Man’s clone, especially in a universe where Peter Parker is no longer around? I never found Scarlet Spider to be the “best” Spider-book as some fans out there – have the people who make this claim even read Superior Spider-Man or are they just part of the dwindling segment of the fanbase boycotting that main title out of spite? Either way, Scarlet #21 is a great first step towards ending the series on a high note, and I remain optimistic about enjoying the final ride here.