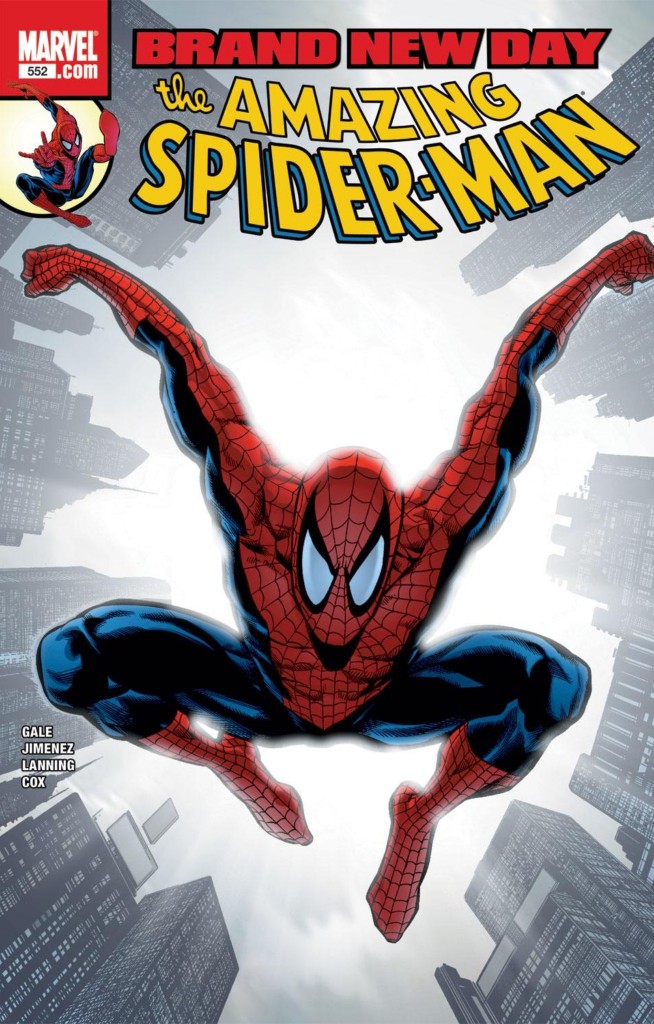 After a two week hiatus brought upon by a deluge of new books sandwiched between an installment of my “Clone Saga Callback” feature and a new edition of the Super Blog Team-Up, I finally have the time and brain space to march onward with my “Brand New Day” era retrospective. The next major arc during this run (as found in Amazing Spider-Man #552-554) comes from Bob Gale and Phil Jiminez and deals with the debut of another new villain, Freak, as well as the mayoral race and the ongoing Spider-Tracer Murder scandal.

After I crowed about how much I’ve been enjoying “Brand New Day” through its first two parts, many of you warned me in the comments section and on social media that the “Freak” arc was undoubtedly a stumbling block. I can’t say I disagree with that assessment – it’s definitely the weakest story I’ve read/reread so far since “Brand New Day” kicked off, but it still features a number of redeeming qualities that elevate it well above some of the drivel we were getting towards the end of the J. Michael Straczynski run on ASM. 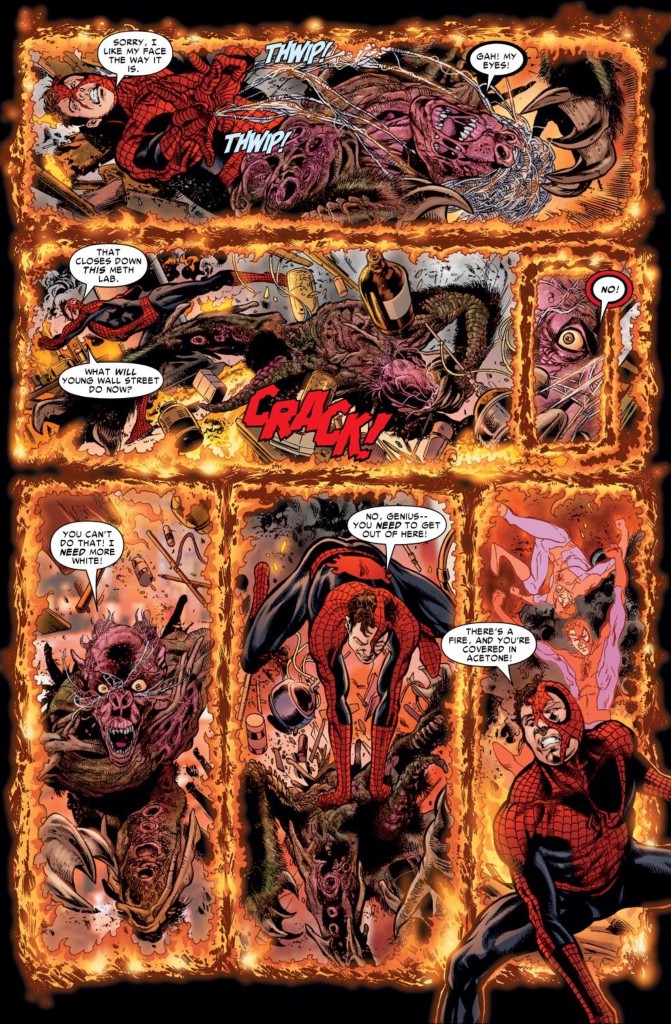 I think part of what drags this arc down is its overall lack of action in favor of the ongoing buildup of the book’s supporting cast and newly introduced characters. We get to see a lot more of Dexter Bennett, the man who purchased the Daily Bugle out from underneath the sick J. Jonah Jameson. And this arc spends so much time profiling the politicos in New York City’s fictitious mayoral race, the storyline resembles an unreleased Aaron Sorkin television series more than an Amazing Spider-Man comic.

Meanwhile, the villain that Spidey does get to fight in this issue – a tweeker-turned-monster named Freak – isn’t terribly compelling or at home in the traditional Spider-Man universe. Whereas I quite enjoyed the “street level” nature of Mister Negative and the mystery elements behind the new goblin Menace, Freak’s origin story comes from some kind of B-movie horror story with a payoff involving Curt Connors that doesn’t remotely connect with me in any kind of meaningful way. 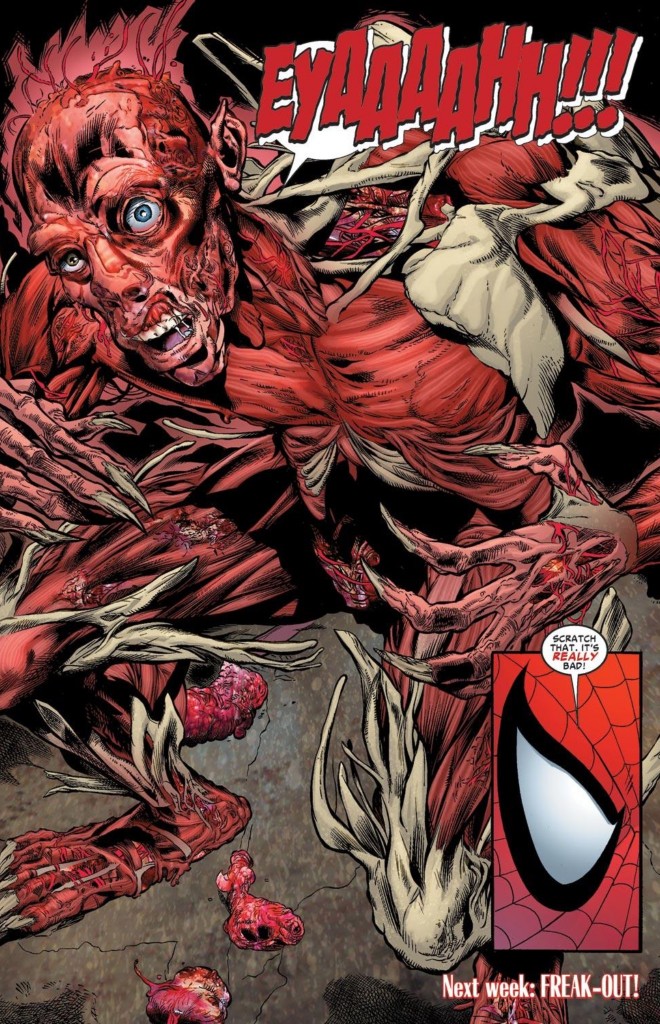 All the same, I also found myself enjoying many of the DB and political-centric sequences, as they both brought me back to an era of Spider-Man comics that were unfortunately pushed aside in favor of grander, more epic narratives involving the likes of clones, resurrected arch-villains, symbiotes and moral strife.

What the “Freak” arc does and does successfully is continue the work of the previous two storylines in building out this “Brand New Day” universe, while also making New York City and all of its nooks and crannies feel authentic and real. This storyline is the epitome of “street level.” It feels very similar to the universe that was famously built out by Frank Miller and Klaus Janson during their iconic run on Daredevil, just without all the dirt and grime on the bottom of Matt Murdock and Ben Urich’s loafers.

The machinations of the New York City mayoral race are quite interesting, especially when you consider the whole race between Randall Crowne and Bill Hollister was spurred on by Spidey and Jackpot’s failure to save the presumed mayoral frontrunner from Menace during the last arc. To watch this all unfold – two anti-Spider-Man candidates duking it out – is a simmering subplot that has slow burn potential. Plus, it plays right into the hands of elevating New York City beyond just a pinpoint on the map and more into a supporting character in its own right. Very few creators over the years successfully played with NYC as something more than just a backdrop filled with skyscrapers and bridges where blondes can be murdered. But Gale and the BND braintrust give the city some verve via this election. 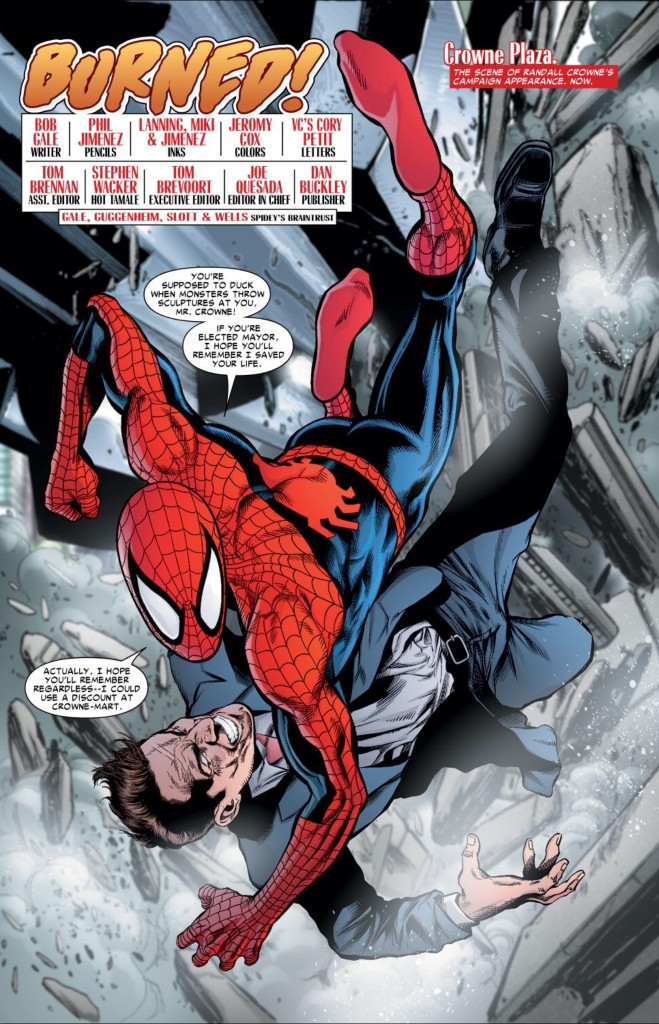 Do we even know who was the mayor of New York City during the JMS run? Did it even matter? And that’s not a necessarily a knock on how JMS played with time and place – I think the way he put Peter back at his old high school as a science teacher was an unequivocal stroke of brilliance – but if you’re going to use a city as prominent (and real) as New York, I think as a creator you’re obligated to bring NYC to life. Probably the best example of this came during the Bronze Age during the Len Wein/Ross Andru run, when Andru reportedly asked Wein to write scenes in notable places like Central Park or the Museum of Natural History so he would get an opportunity to illustrate these famous landmarks.

The amount of time spent at the newspaper also feels quite foreign when compared to the creative runs that immediately preceded BND. The Bugle, and J. Jonah Jameson specifically, have always felt like a pivotal part of the Spidey Universe framework. But I also understand why after a while, creators needed to move away from it since, beyond killing Jonah or making him and Spidey best buddies, there was nowhere new or exciting to explore. The BND team plays around with the idea of removing Jonah from the equation – or at least making him the underdog. On top of that, Bennett is portrayed as such a dangerously inept villain – a wise person once told me that stupid people are dangerous – that it creates some legitimate human drama for the “true” newsmen still walking the hallways of the DB like Betty Brant and Joe “Robbie” Robertson. And apropos of nothing, in my dying days of journalism, I had the (dis)pleasure of working for someone like Bennett, so maybe there’s just something about his characterization that really hit me close to home. 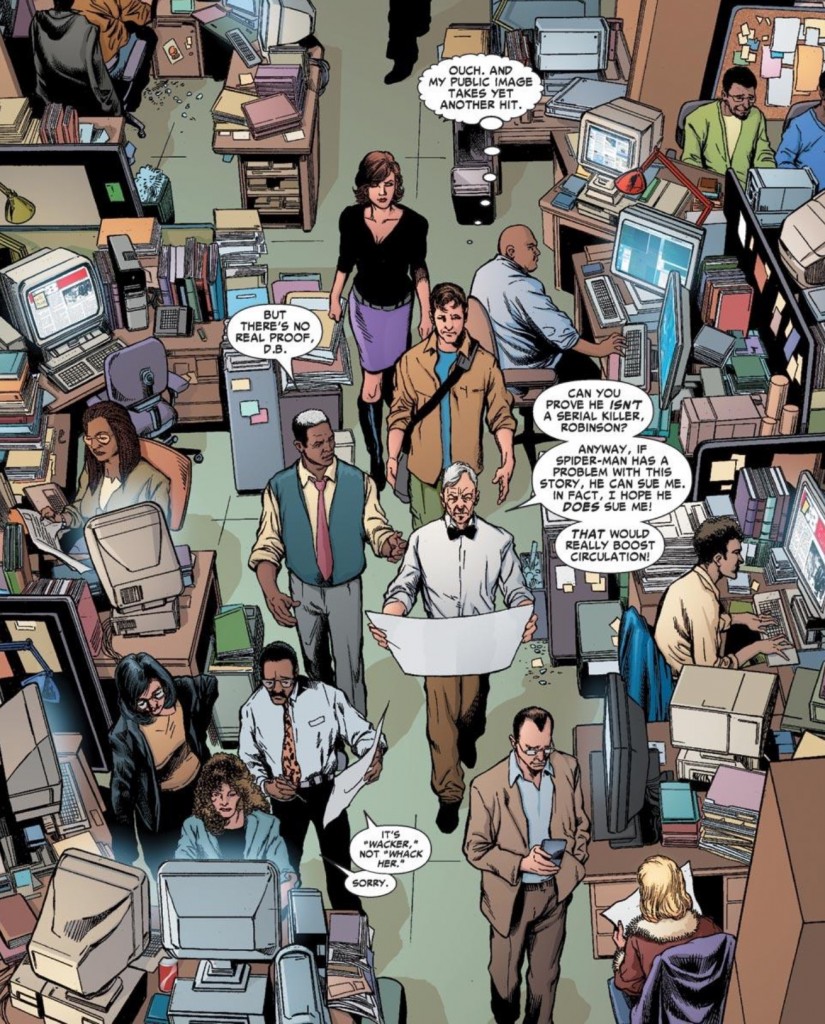 So three arcs in and I’m yet to read something that I think is objectively “bad” in “BND. I still think there’s a semblance of the population out there that decided to write off BND regardless of the quality of the stories it produced based on the circumstances behind its implementation. But I maintain that if you strip away the stink of “One More Day” (a big “if” for many of you), you’re left with a slow-burning storyline that’s a throwback to many eras of Spider-Man we now consider to be among the best. In one of the earlier installments of my retrospective, somebody commented that so far, the braintrust has accomplished little in terms of establishing WHY Peter needed to be single, but I really do think that this is a circular argument that leads nowhere productive. You either believe single Peter is a crime against humanity and a slap in the face to long-time fans, or you accept that this was something the folks in charge thought was necessary and like it or not, you’re still allowed to judge the stories that came after based on their own merits. Good stories are good stories, regardless of all of the BS that preceded their creation.