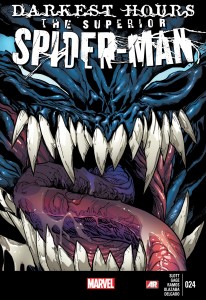 If Superior Spider-Man #23 was a case study of what often frustrates me about reading a Dan Slott comic, than Superior Spider-Man #24 is a prime example of what I love about his work. Like its preceding issues, Superior #24 moves at breakneck speed, with a countless number of plotlines getting introduced and tabled on nearly every page. But whereas I found Superior #23 to be busy to the point of distraction, Superior #24 grips me with every twist and turn, never losing its focus along the way.

Trouble was clearly on the horizon when Spider Ock bonded with the symbiote last issue, but even I am shocked by just how quickly things unravel for Otto. Feeding off the power of the symbiote, the “Superior Venom” leaves Flash and Cardiac wounded and weary (and Flash apparently only has “hours” to live … better not tell Star Lord and Rocket Raccoon the bad news), exposes his inner evil to Aunt May, and frightens Mary Jane to the point that the Avengers have FINALLY been called in on the case (which is only something I’ve been screaming about for months now… maybe not the right reason somebody called, but at least somebody called them).

Slott and Christos Gage flawlessly transition from sequence to sequence, while Humberto Ramos gets the kind of world coming apart story he excels at artistically. Again, the book moves fast, but each scene gets just enough time for the pacing to feel organic. There were far too many instances in the last issue where it felt like Slott and Gage checked in on certain characters more out of obligation than necessity. I understand that the bulk of these threads will likely all tie together come “Goblin Nation” over the next few months (like Jonah and the Spider Slayers or Parker Industries), and thus need to get introduced now or never, but the rushed nature of these transitions makes these events feel less consequential. Every panel has a purpose in Superior #24, giving me the impression that it’s all leading somewhere big in two weeks. 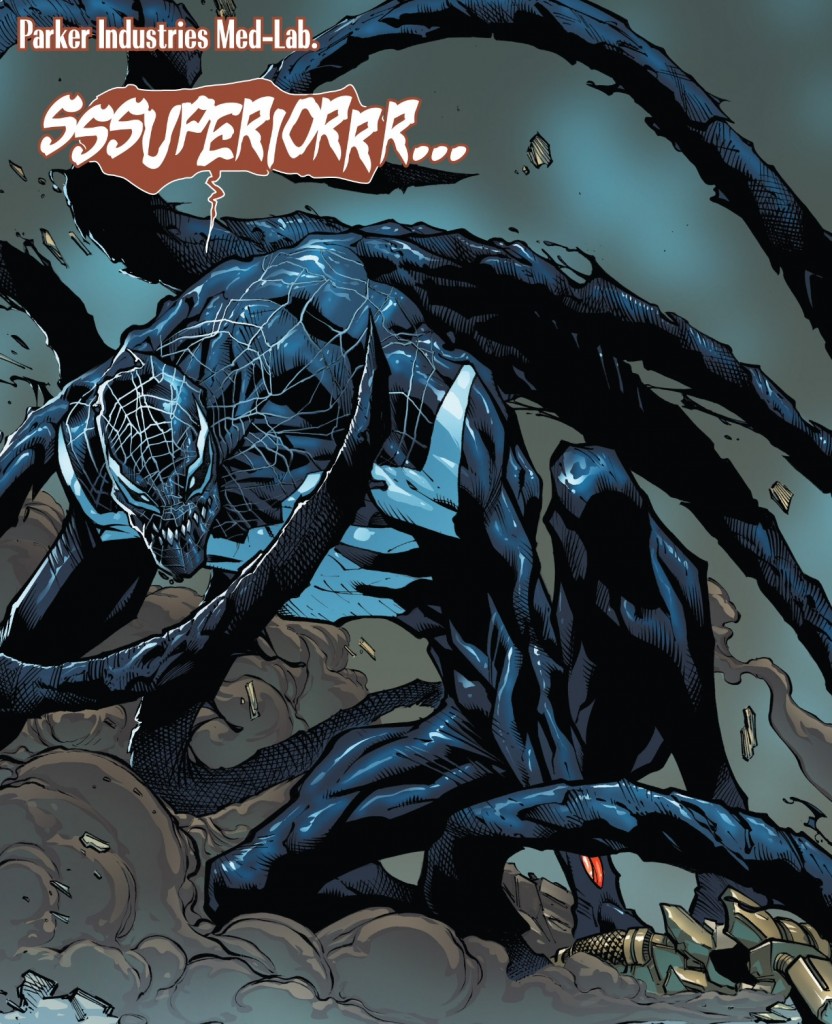 While I’ve said in the past that this series is at its best when Spider Ock seeks redemption, I appreciate how Slott and Gage take no half measures when it comes to their characterization of Superior Venom. The symbiote should and does expose all of Otto’s worst, most villainous traits. There is never even a hint from the script that perhaps Otto will find a way to control the symbiote and still continue his charade as Spider-Man. While I’m not willing to bank that Otto becomes officially exposed in the very next issue, the jig is almost certainly up. 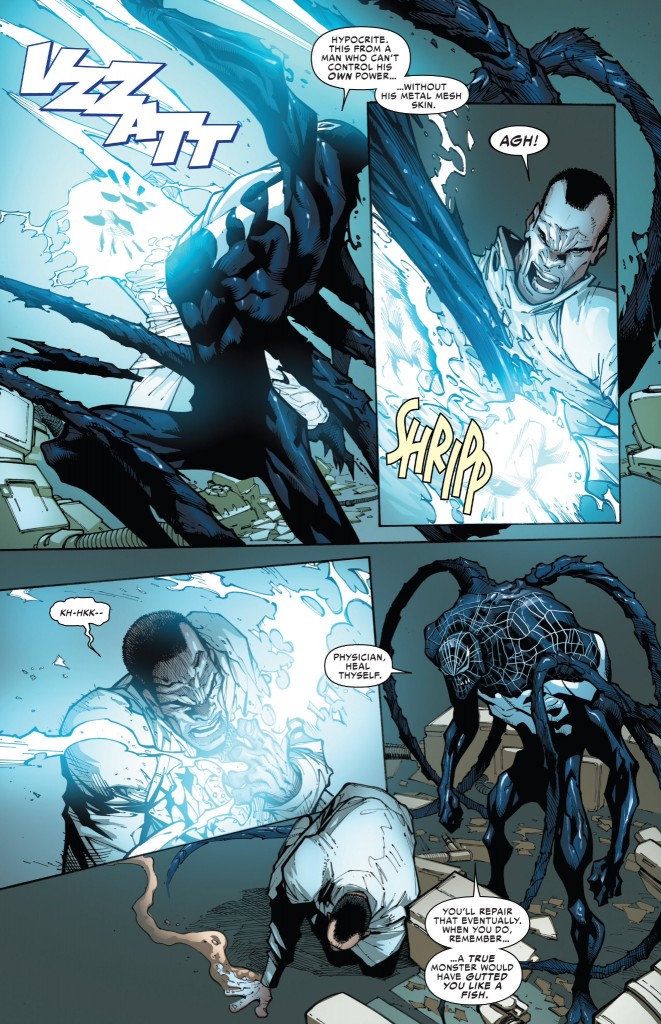 Yes, I was right in that certain undesirable character moments took place in prior issues because Slott and Gage needed things to play out a specific way down the road. Most notably, last issue’s awful brunch scene involving Aunt May and the borderline intolerable things she said to Anna Maria about her “little person” DNA. But at least Slott and Gage work to redeem May a bit in this issue, having her admit to “Peter” she was wrong to speak to Anna Maria like that, but also having her explain that her anger is misplaced, and that she’s really upset about how “Peter” continues to lie to her about his comings and goings – especially his relationship with Spider-Man (and hey, that Annual that “counts” gets referenced).  Plus, if you combine the established friction between “Peter” and May, and then his emotional instability from the symbiote, you’re left with a compelling scene that had me guessing how Otto was going to react. 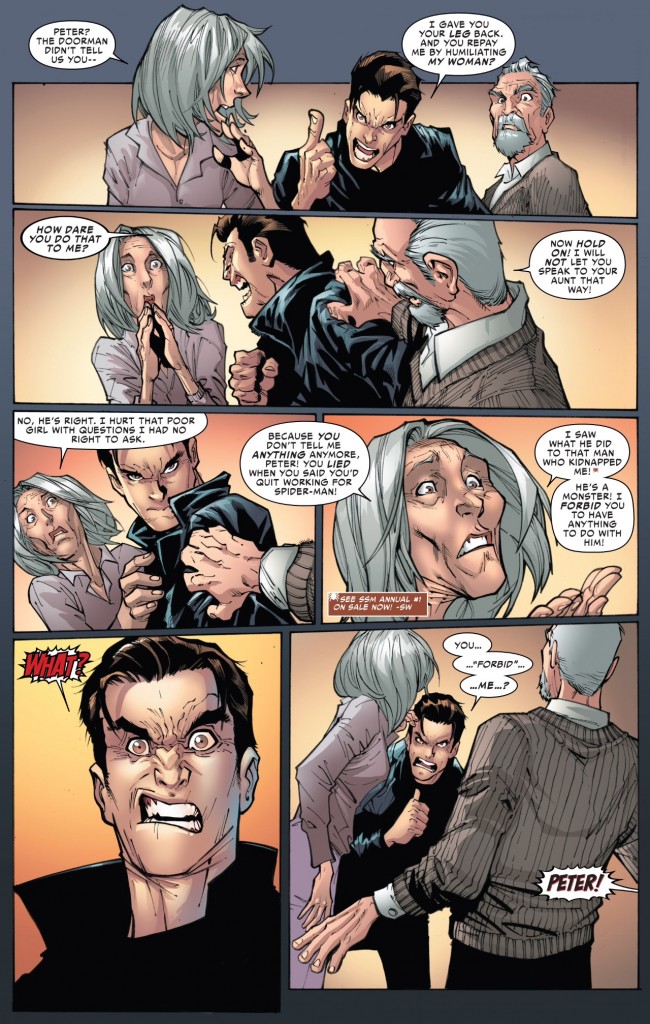 For the first time in perhaps the entire Superior era, the Green Goblin feels like he has something to do besides show up for one page, laugh maniacally, and then disappear again. This Green Goblin clearly has his sights set on getting rid of Roderick Kingsley, aka, the original Hobgoblin, once again putting another check under Norman Osborn’s name on the “who is the Green Goblin” scorecard. Watching the Goblin bilk some of the Hobgoblin’s “franchise” villains – including somebody in a bear suit who swears he’s not The Grizzly, but rather the Bruin – is a funny scene capped by the Goblin throwing away the money (“it was cumbersome” – great line from Gage). 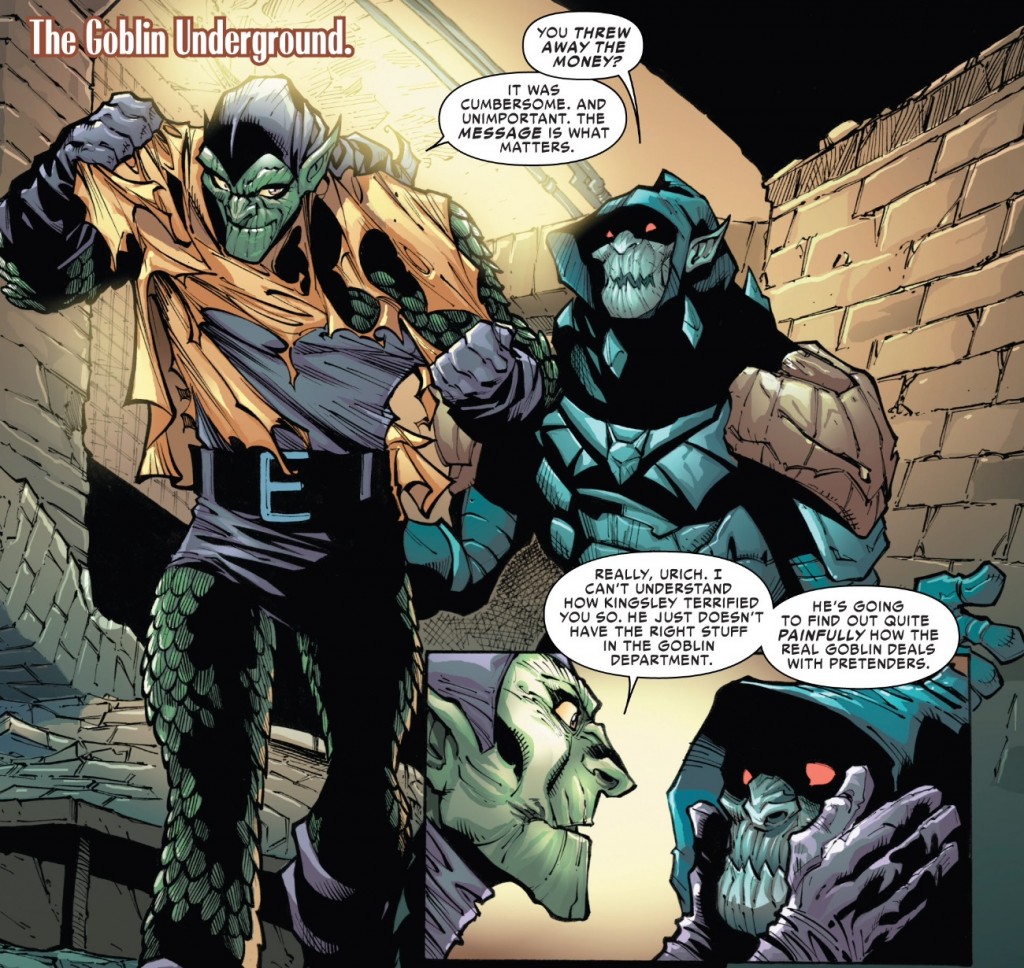 The issue also shows the Goblin at his most diabolical, spraying his hostage Carlie Cooper with goblin serum in an attempt to make her “family” so she can share any “secrets” that she knows about Spider-Man’s identity.

On both Chasing Amazing and Twitter, I’ve talked to fans who have this theory that the Green Goblin is actually Peter Parker in control of Norman Osborn’s body. I find this idea to be implausible for many reasons, but primarily because having Peter be impersonating his most nefarious adversary (and acting like a villain in the process – remember when the Goblin’s goons firebombed Mary Jane’s nightclub?) would be the most out of character editorial decision since a certain deal with the devil was made a few years ago. But the comeback to my cynicism has been nobody sees this Goblin do bad things, just his surrogates … well if you think spraying an innocent woman with goblin serum isn’t a bad thing, then I don’t know what to tell you. Perhaps the Goblin isn’t an Osborn, but I can say with near-certainty, he’s not Peter, and if he is, I will feel very, very betrayed by this story.

And on a final note, three cheers for Mary Jane Watson for finally showing up in this series. This character has been terribly under-written since the end of Spider Island after Slott teased that perhaps she still “loved” Peter. But he only brought the two of them closer after Doc Ock had taken control of Peter’s body and proceeded to talk to her like a dog. I love how assertive and confident she is in this issue, demanding that “Peter” talk to her about whatever it is that’s bringing about this wicked change in personality. We then get a wonderful spread from Ramos, referencing one of my favorite Todd McFarlane splash pages from one of my favorite Amazing Spider-Man issues of all-time. 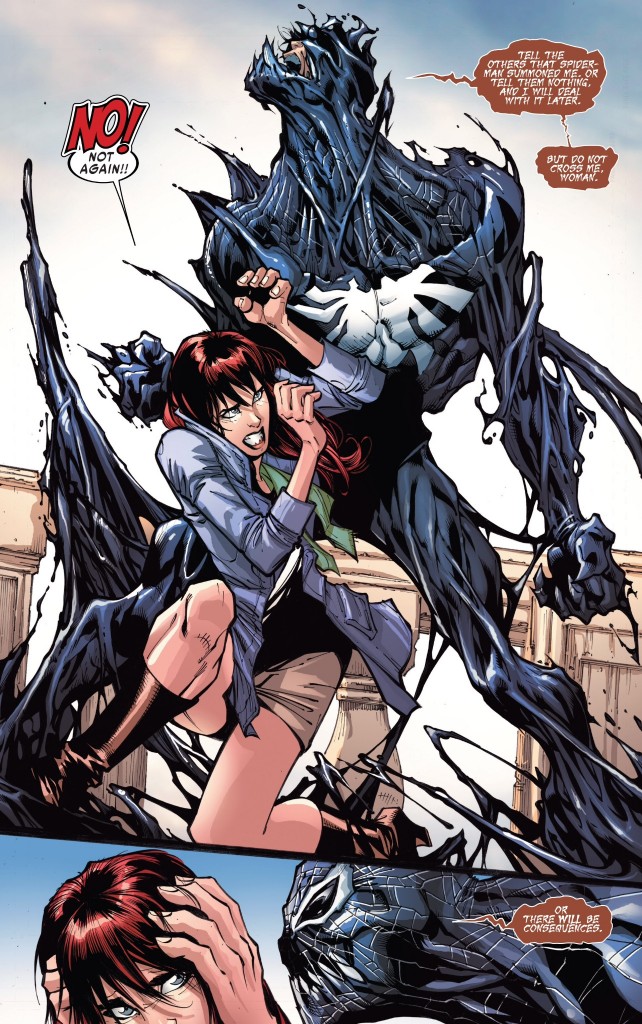 Superior #24 isn’t the thought-provoking back and forth that Superior #9 was, nor does it have the gleeful, schadenfreude-fueled developments of Superior #19, but the comic still stands as one of the better Spider-Man comics of 2013. After letting me down a bit two weeks ago, Slott (and Gage) prove once again, that you can never count this series out for more than an issue or two at a time.