Home  »  New Issues   »   Superior Spider-Man Annual #1: This Might Have Counted Months Ago 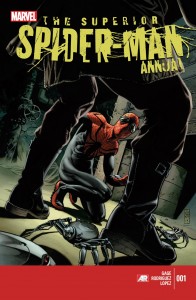 Marvel has been telling us for months that Superior Spider-Man Annual #1 “counts.” As someone who probably has an unhealthy amount of skepticism regarding the “legitimacy” of the Spider-Man annual issues, you could only imagine what my expectations were for Marvel’s first Superior Annual. Now that I’ve read this issue, written by Christos Gage with pencils from Javier Rodriquez, I’m not so sure if the comic is as consequential as Marvel anticipated it would be, but I do think it is an overall worthwhile read, that primarily serves to further illuminate a lot of stuff about the Superior Spider-Man that most of us should already know.

Perhaps my biggest complaint about this issue – in terms of its creative quality and regarding how much it actually “counts” – is the fact that the comic reads like it should have been published months ago. Gage’s script references a lot of events that feel like they occurred in this universe many lifetimes ago – like Spider Ock’s questionable decimation of Jester and Screwball and the pre-Amazing Spider-Man #700 storyline where Peter outs himself as being the tech “inventor” for Spider-Man. In the months of real-time that have passed since these storylines were first published, we’ve watched Spider Ock’s story unfold like a three-act play. In Superior issue’s #1-9, we watched Otto’s moral code twist the meaning of “with great power, must also come great responsibility.” In Superior #10-19, we witnessed Spider Ock at his apex – having conquered most of the city’s criminals while effectively rendering long-time adversary J. Jonah Jameson irrelevant with some well-played blackmail. The most recent two issues signal to me the start of the Superior-era’s third act – the downfall of Spider Ock. 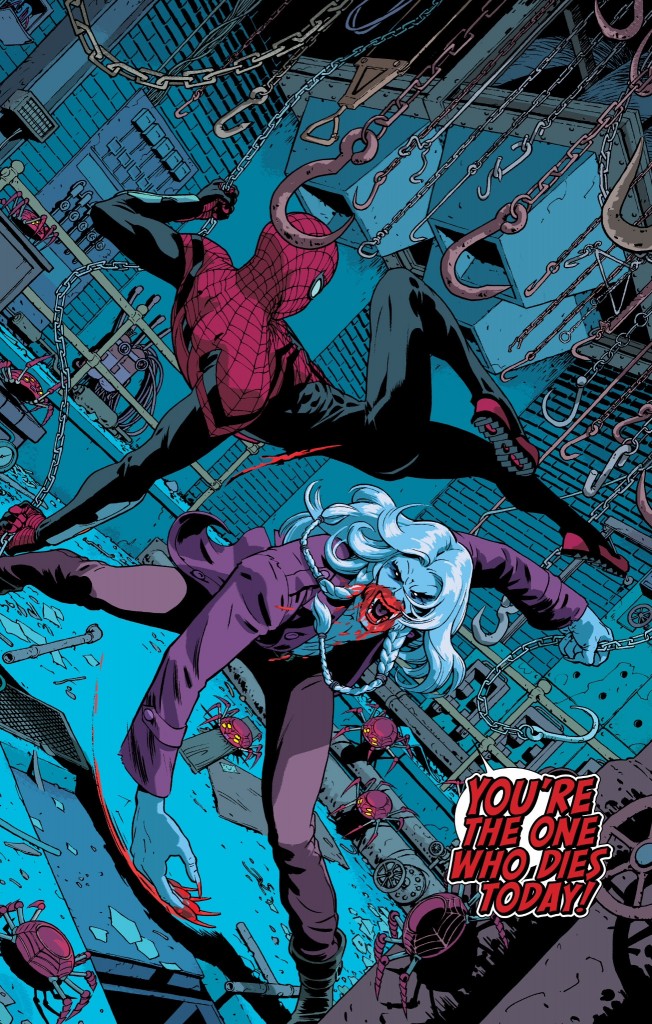 Based on some of the themes and narrative developments on display in the Superior Annual, I would probably group this issue as feeling more in-place in the first act of the larger Superior arc. This issue demonstrates a level of cruelty and brutality from Spider Ock that is meant to be shocking and off-putting, but those punches don’t seem to land as solidly when we’ve already witnessed the character destroy the Vulture, kill Massacre and rip apart the juvenile Jester and Screwball. Yes, Spider Ock’s Nazi-style torture of Blackout – complete with teeth and nail removal – ups the ante a bit in this issue. But is also doesn’t tell us anything new about the character. Spider Ock’s demented sense of self-righteousness and justification for his unequivocally evil actions is old hat now. I found nothing remotely perverse about his torture of Blackout. Spider Ock saw a potential long-term threat to his alter ego in Peter and the entire Parker family, including Aunt May, a woman he cares deeply about. Of course Otto is going to go to the extreme to eliminate this threat because that’s what he’s already done countless times before this issue was published.

That’s not to diminish what I found to be a very good story from Gage and some worthwhile Silver Age-esque art from Rodriguez. The biggest moment of consequence from this story is probably the comic’s final panel, which shows the Green Goblin (this feels like the 30th time Goblin has closed a Superior story and there haven’t even been 30 issues) reflecting on how his long-time foe has developed a harder edge and talking about the “tradition” of taking the fight directly to him. In all our speculation about who the Goblin might be, talk of “tradition” certainly implies that this is Green Goblin version 1.0, aka Norman Osborn. But given Dan Slott’s insistence that we don’t assume the villain is Norman, your guess is still as good as mine when it comes to this mystery. 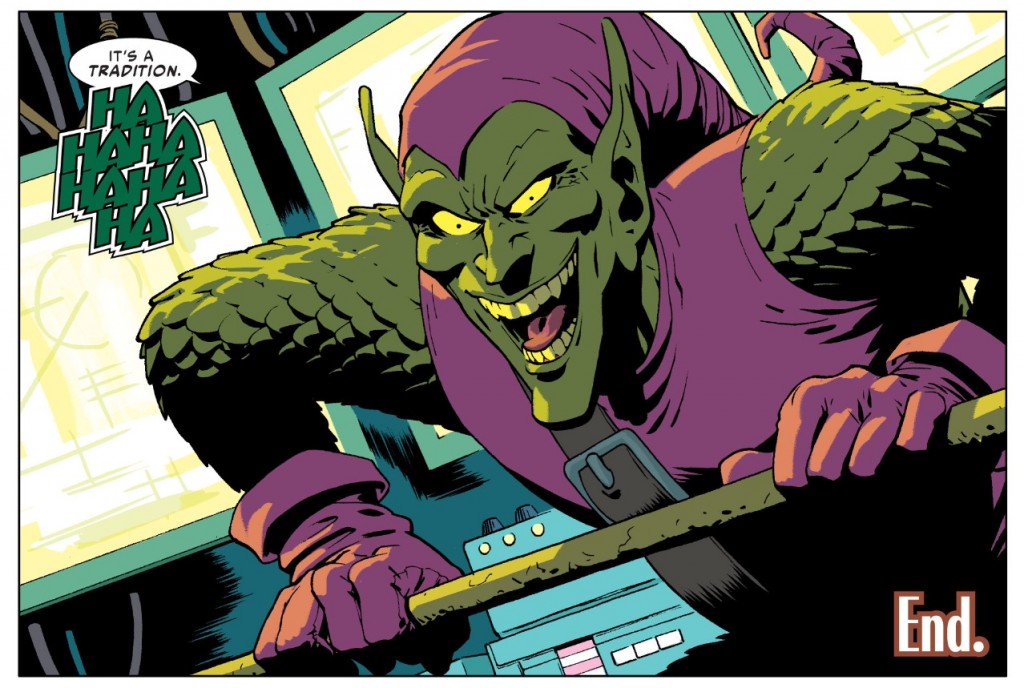 I did enjoy a lot of the humor in this issue, as this comic – as twisted as it is – might be the funniest issue penned by Gage yet. The opening panel of Aunt May stuffing “Peter” with wheatcake and Jameson’s father telling him not to eat so many because he’s going to get too fat is as good of a riff on the classic opening panels of Amazing Fantasy #15 that I’ve ever seen. What a wonderful callback from Gage and Rodriguez.

Then, immediately before the Goblin scene at the end, some random pickpocket bumps into Peter on the street (one of my readers pointed out that it might have been one of the track suit guys from Hawkeye though he never says “bro”) and becomes incessantly apologetic when he realizes who he’s crossed paths with. It’s a simple, but effective joke from Gage that functions as a well-designed punchline/coda to Spider Ock’s heinous confrontation with Blackout. 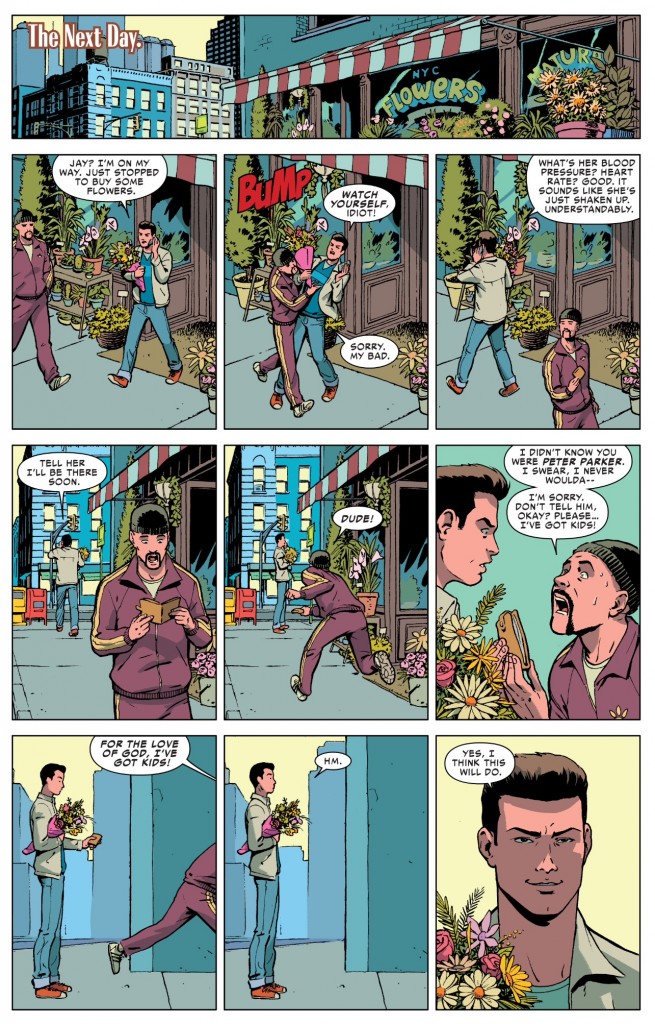 But do all of these elements equal an annual issue that “counts?” While Marvel’s marketing of this comic may come across as carnie-level snake oil peddling, I will say that this issue of Superior Spider-Man “counts” as much as any other one-and-done story that’s enjoyable to read and doesn’t take great liberties with established characterization and continuity. But not to sound overly cynical, shouldn’t Marvel aspire to create stories that “count” for every comic book they publish?