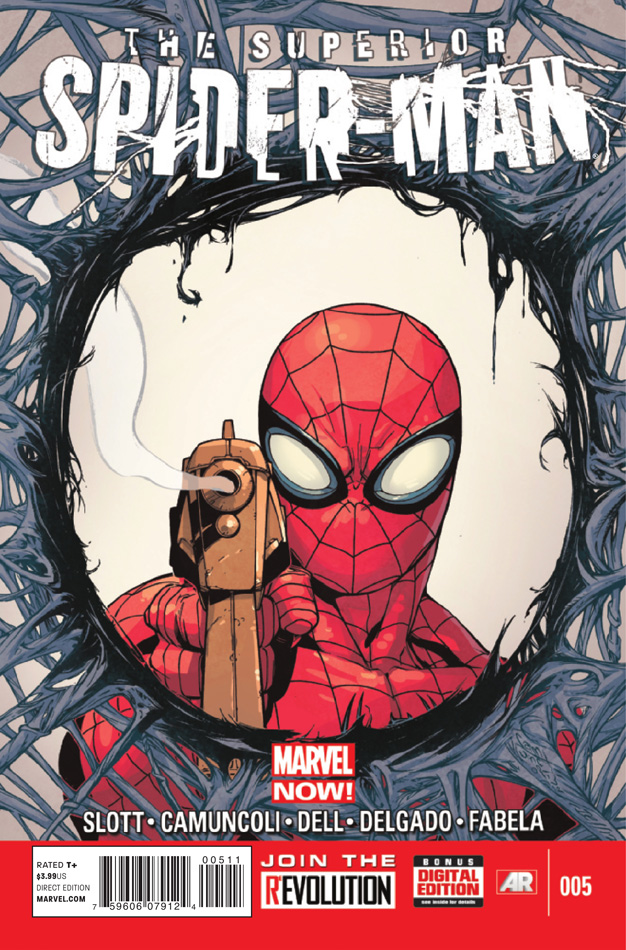 The way I see it, Superior Spider-Man #5’s shocking ending – Spidey Ock killing Massacre as a means to protect society from future violence by a demented serial killer –  has both a positive and negative effect on the direction of the series from here on out. On one hand, the Spidey Ock character has officially crossed a line that Peter Parker has never crossed meaning the comic series can now explore some very fascinating ideas about Spider-Man’s long-held “power and responsibility” mantra. That’s a good thing. On the other hand, my fear is that in making Spider-Man a killer, Superior has strayed so far from the moral center that has grounded Spider-Man for more than 50 years, writer Dan Slott and the rest of his creative team now need to accelerate the resolution of this mind-swapping arc with Peter and Otto before long-term readers become alienated by all the shades of gray (or black in this case).

Let me dwell on the latter point for a moment. I hope I’m not coming across as one of those fans who “swore” off Spider-Man comics after ASM #700 because they were enraged by the fact that Peter Parker was “dead” and a “villain” had murdered him and taken his place. I’ve understood from the get-go that this whole Spidey Ock/Astral Peter storyline is just another arc in the long history of Spider-Man comics. It just so happens in this case Marvel has decided to end the numeration of the ASM series at #700 and pick up the arc inside a new title called Superior Spider-Man. Whether or not ASM is ever resurrected and the numbering continues onto #800 remains to be seen, but I’m not about to rant and rave over the fact that Marvel Now has done away with its Spider-Man franchise because of Superior’s existence. I’ve been reading comics long enough to know these publishers will do ANYTHING if it will attract sales and intrigue (are you reading my Gimmick or Good column at Comics Should Be Good?). 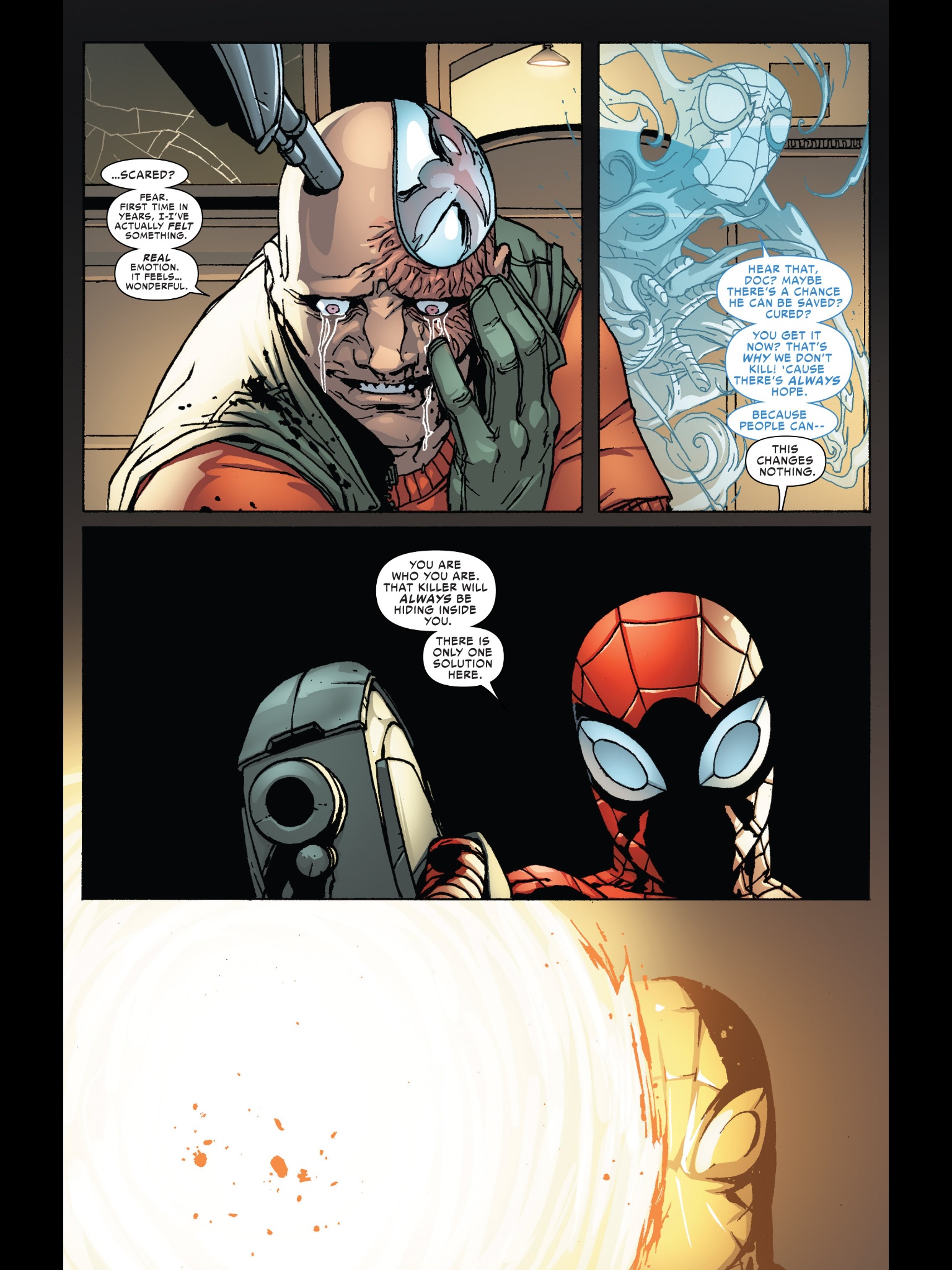 With that said, for a Spider-Man comic book to actually be a “Spider-Man comic book” (quotations for emphasis), I hold firm that it needs to abide by a certain moral code to succeed. Spider-Man is a hero and heroes don’t kill in cold blood, and if they do end up killing someone, they’re remorseful for their actions. For what it’s worth, this isn’t only true for Spider-Man but for any superhero comic book. When Bruce Wayne’s back was broken by Bane in Batman during the early 1990s, he was replaced by a colder, morally ambiguous character who allowed villains to die. Wayne eventually took back his Batman crown because he couldn’t have a killer operating as Batman. In the case of Spider Ock, he has officially entered Azrael territory. 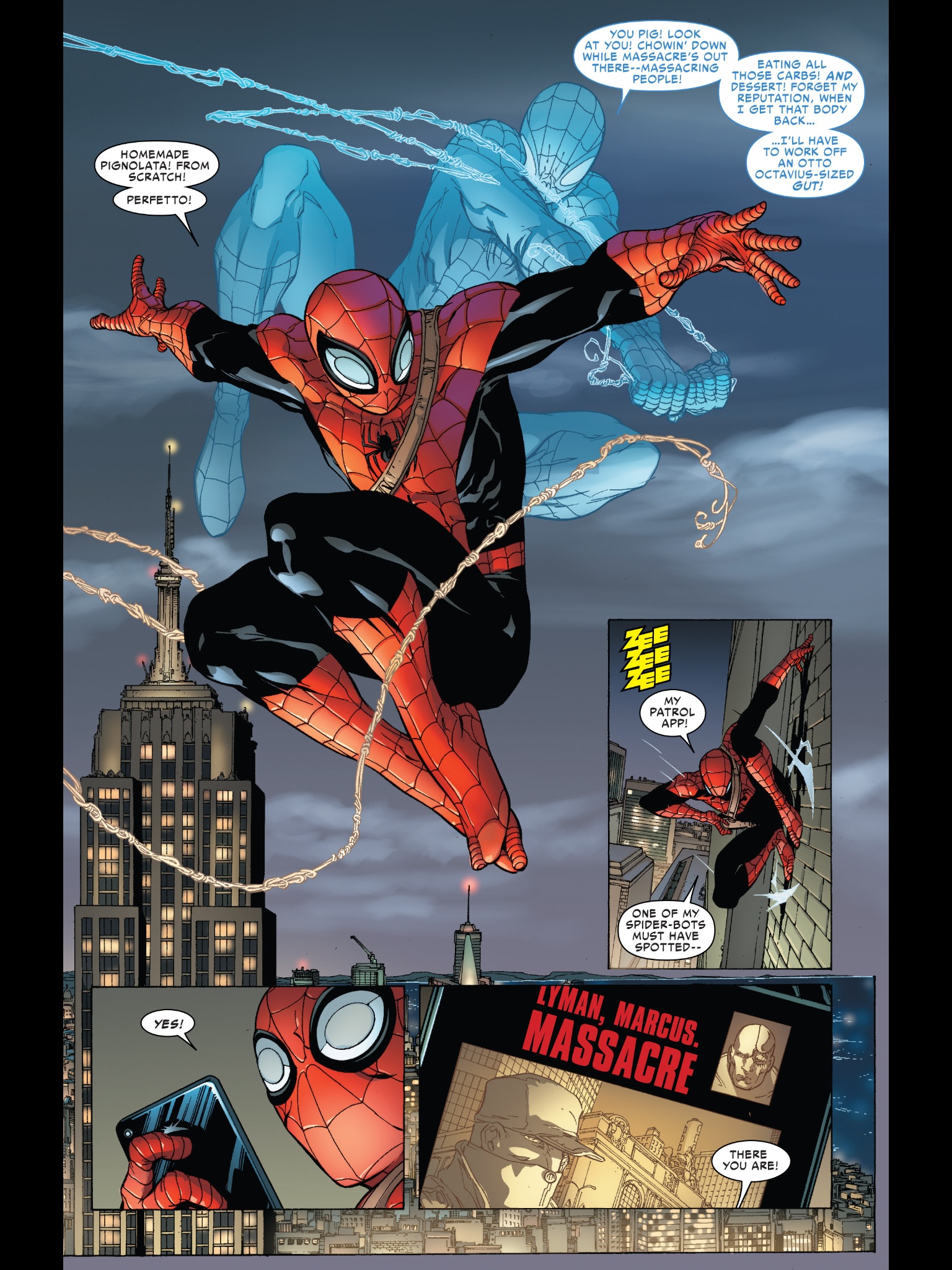 That doesn’t mean Slott and Co. still can’t tell compelling stories about Spider Ock but the clock is ticking on their expiration date. As Spider-Man, Otto has crossed a line that is going to quickly reveal to the world that he is not the “real” Spider-Man. How that accelerates Astral Peter regaining control of his body is still an unknown to me, but I do know that Slott and Marvel are going to lose a lot of the acclaim they garnered for this daring series if it just becomes Spidey Ock versus the world – both heroes and villains don’t trust him and thus he only works for himself. Sounds like Wolverine if Wolverine actually only worked for himself and not for the X-Men, the Avengers, etc. And again, Spider-Man is not Wolverine, and thus Spider-Man die-hards are not going to keep reading about a character who is unidentifiable to them – not over the long-term, at least. 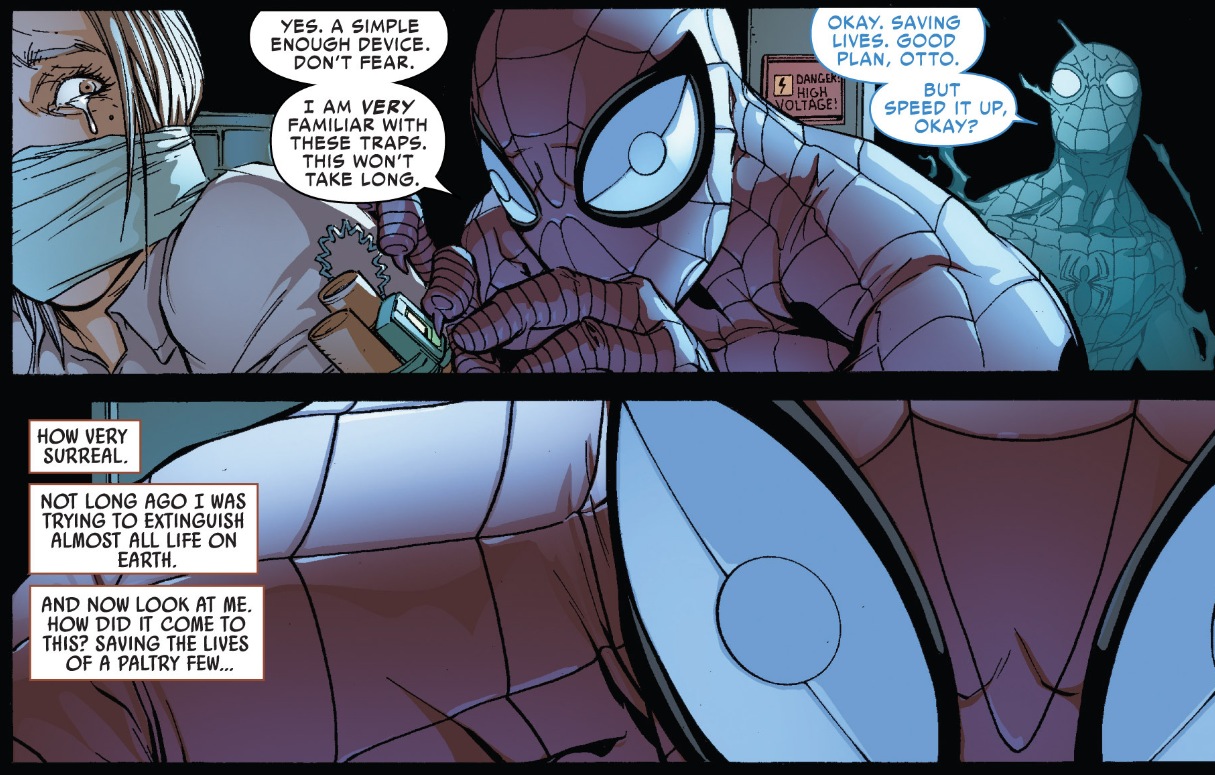 If Marvel’s solicitations are to be trusted, it appears that things are coming to a head around Superior Spider-Man #9 so my prediction about some kind of march to a finish line, may not be that far off. But I also know not to lean too heavily on Marvel’s marketing materials, as the shocking “reveal” in this issue may just be the other scenario I speculated about – all of the Marvel Universe is against Spider-Man and thus he’s forced to go into hiding or seclusion or something. Or maybe he gets confined to Ravencroft and we deal with an five-issue arc there. Anything is possible, especially if Slott and Marvel are truly determined to ride out this status quo change for as long as they initially projected they would (remember in December when it sounded like they were ready to leave Peter Parker buried forever, only for his “spiritual” form to reappear two weeks later?). 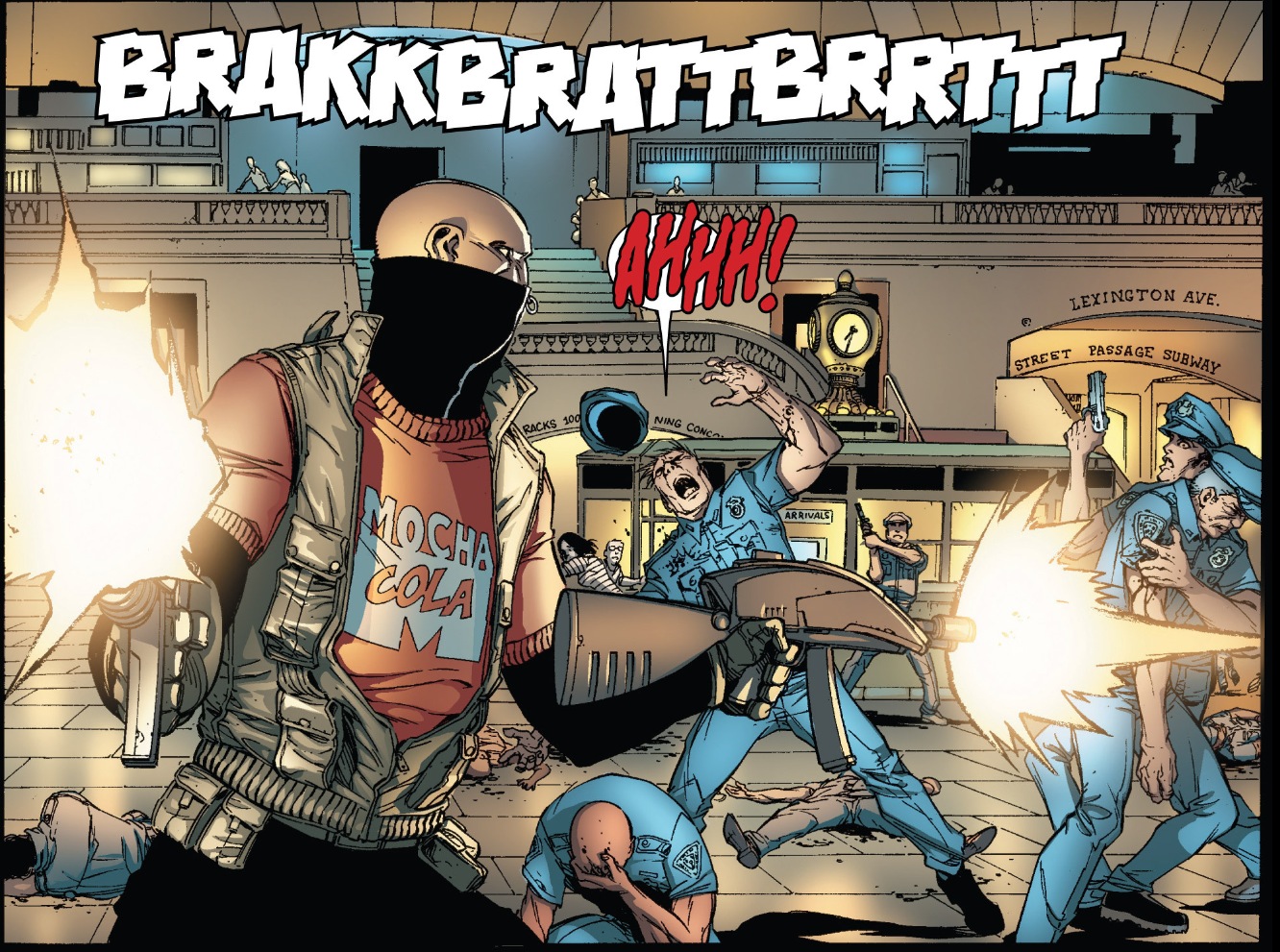 But in all of this hand-wringing, I also can’t deny how captivated I am by this series. For the first time in as long as I can remember (Spider Island, maybe?) I honestly have no idea where a Spider-Man comic is leading me next. As a consumer, that’s a great feeling. I look forward to getting my Superior Spider-Man comic book in the mail every few weeks (now if only Marvel/Midtown could figure out a way to mail me all of my Avenging Spider-Man comics but that’s a vent-session for another day – needless to say that’s why I haven’t talked about the events in THAT title for a few months). So again, the ramifications from the events of Superior #5 are definitely a positive from my perspective as a reader. I just hope that the series doesn’t fall into some kind of stasis in an attempt to avoid a resolution because certain people in power are determined to not let things naturally run their course.