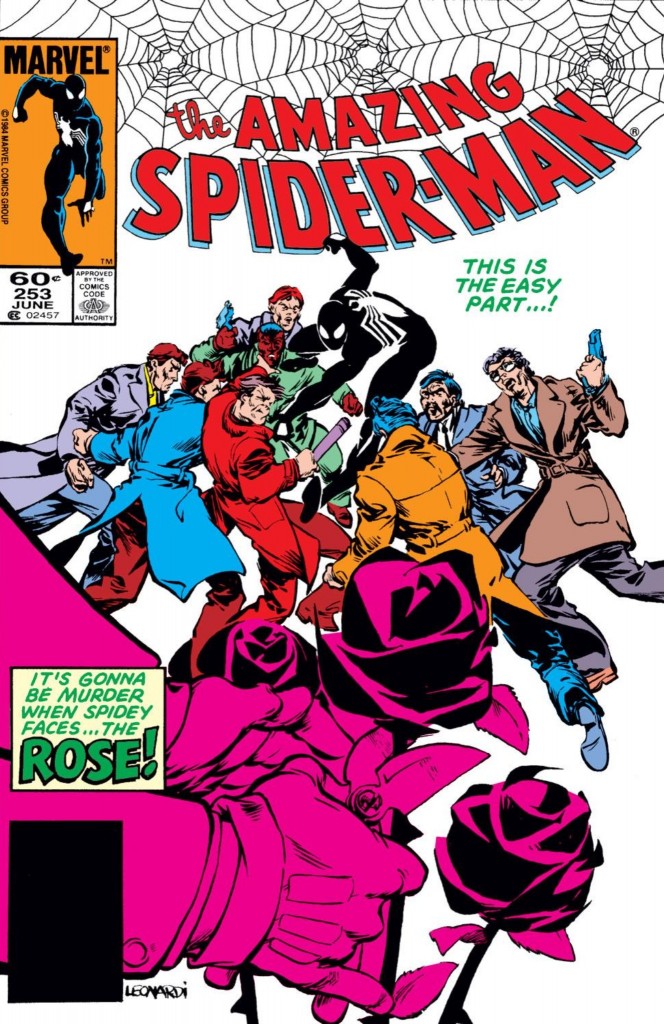 Despite the fact that artist Ron Frenz did not provide pencils for the issue (Rick Leonardi has the honors), Amazing Spider-Man #253 maintains that “new beginning” vibe that was initially put forward in ASM #252, the first part of the “Alien Costume Saga.”

In one scene, Tom DeFalco’s script even hits the reader over the head with the “newness” of everything, when Spidey talks about how his new black costume has him feeling as “anonymous” as he was when he first burst onto the scene as the Amazing Spider-Man in the story made famous in Amazing Fantasy #15. 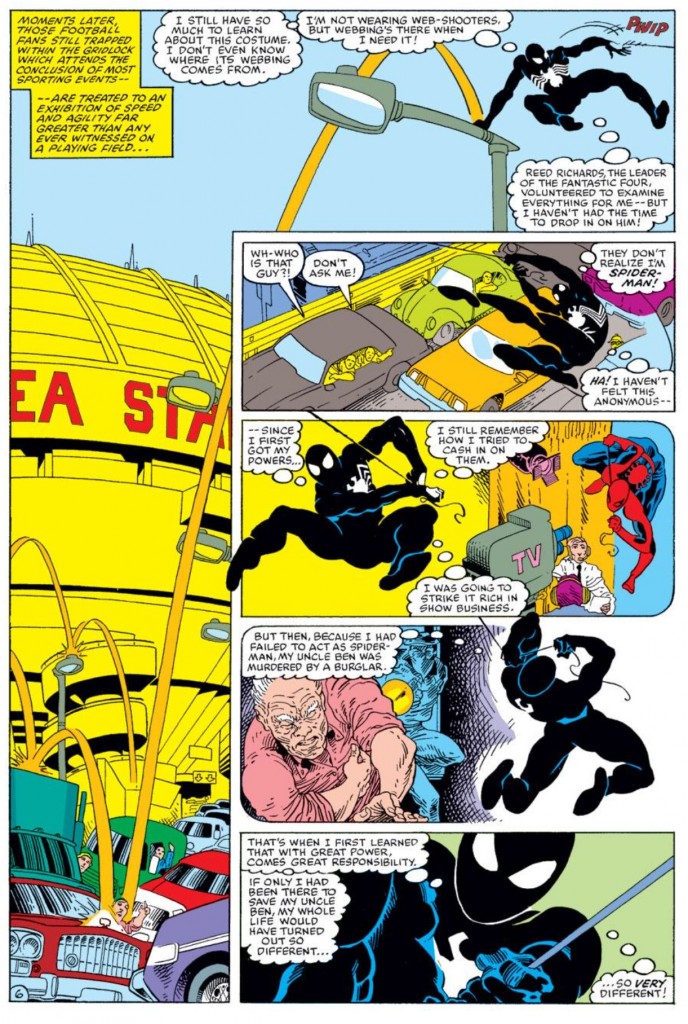 Readers today probably take the historic nature of a scene like this for granted since superhero’s tend to change costumes whenever it is convenient. In one of my more cranky posts back when I first launched Chasing Amazing in 2011, I even joked about how over the span of three comics, Spidey wore three different costumes (his stealth outfit, the traditional red and blues, and the white FF duds). In 1984, putting Spider-Man in a black costume was akin to creating an entirely new superhero. Spidey talking about how no one knows who he is when he’s wearing the costume is not just hyperbole.

But beyond the new costume, DeFalco’s script also manages to provide an interesting spin on the age-old Spidey adage, “with great power, there must also come, great responsibility.”

ASM #253 uses the mantra to unexpectedly draw parallels between Peter and Ray Nesters, a professional football quarterback who  is being paid off to throw games by the Rose – the mysteriously well-coiffed mob boss who is introduced for the first time in this issue.

For Peter, his power/responsibility moment comes when he reveals to Aunt May what readers have known about for nearly 10 issues – that he dropped out of graduate school to focus on his “photography career” (aka, his time as Spider-Man).

May is absolutely devastated by Peter’s reveal, reminding her nephew that his doctorate was something he was working towards for years. To throw it all away at this juncture would be an absolute waste of everyone’s time and effort. She even goes as far as to invoke the posthumous disappointment of Uncle Ben, as if the reader needed any more help reading between the lines and seeing the similarities between Peter’s decision to drop out of school and that other time he very famously acted selfishly as Spider-Man.

The Peter/May sequence serves as a reminder that power/responsibility doesn’t only apply to Spider-Man. And while Peter historically has failed May and his other loved ones, usually when he’s too busy being Spider-Man to be there for an important event, her dismayed reaction to him ending his studies has a very specific sting to it. Yes, it’s Peter’s life to do as he so chooses, and he’s very clearly an adult at this stage of continuity, but it’s totally reasonable to call his judgment into question all the same. 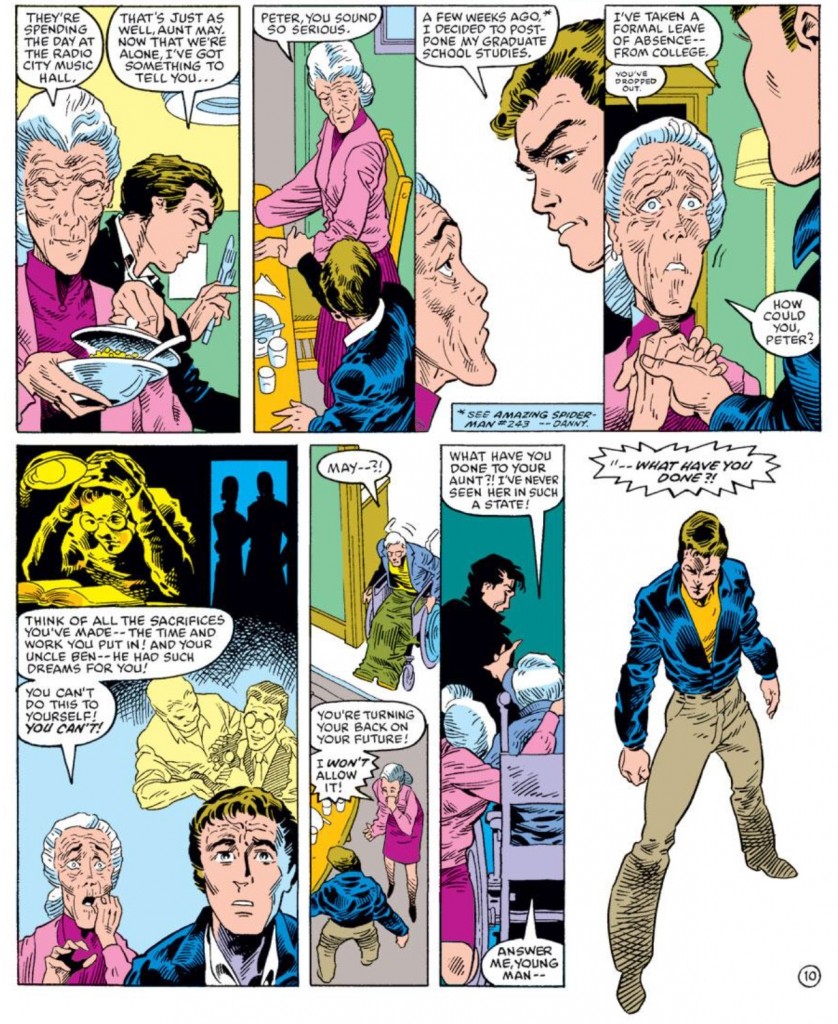 From the way Peter’s dropout was first presented by Roger Stern in ASM #244, he made this decision in large part because he wanted to make extra money to help pay off Felicia Hardy/Black Cat’s medical bills. As discussed over the course of multiple posts last month, the Spider-Man/Black Cat romance had red flags galore from the very start, so the fact that he was willing to terminate something he had been working for his entire life in order to get closer to a woman he knew had a checkered history, seems extraordinarily irresponsible for Peter.

Adding insult to injury is the fact that in ASM #253 we learn that when tasked with taking actual new photos of a sporting event or some other happening that’s non-Spider-Man related, Peter is a pretty lousy photographer. The usually even-keeled Joe “Robbie” Robertson, who replaced the “disgraced” J. Jonah Jameson as editor of the Daily Bugle a few issues prior, really gives Peter the “what for” for his subpar photography output. So by the end of his conversation with Robbie, Peter is really left questioning whether or not quitting school was a mistake.

Ray’s journey in this issue is similar to Peter’s, if not ultimately more tragic and dumbfounding. Ray is presented as having it all – professional success and a good family (his brother Tony is there on the sidelines cheering him on) – and he instead makes a deal with the devil (the Rose) in order to get some extra bucks on the side. As a result, Ray not only destroys his integrity as a professional athlete (and as a person), but he endangers his own life and his brother’s. Ray “does the right thing” at the end when he admits all of his transgressions to the Bugle, but the universal reaction to the confession is that he wasted his talent. 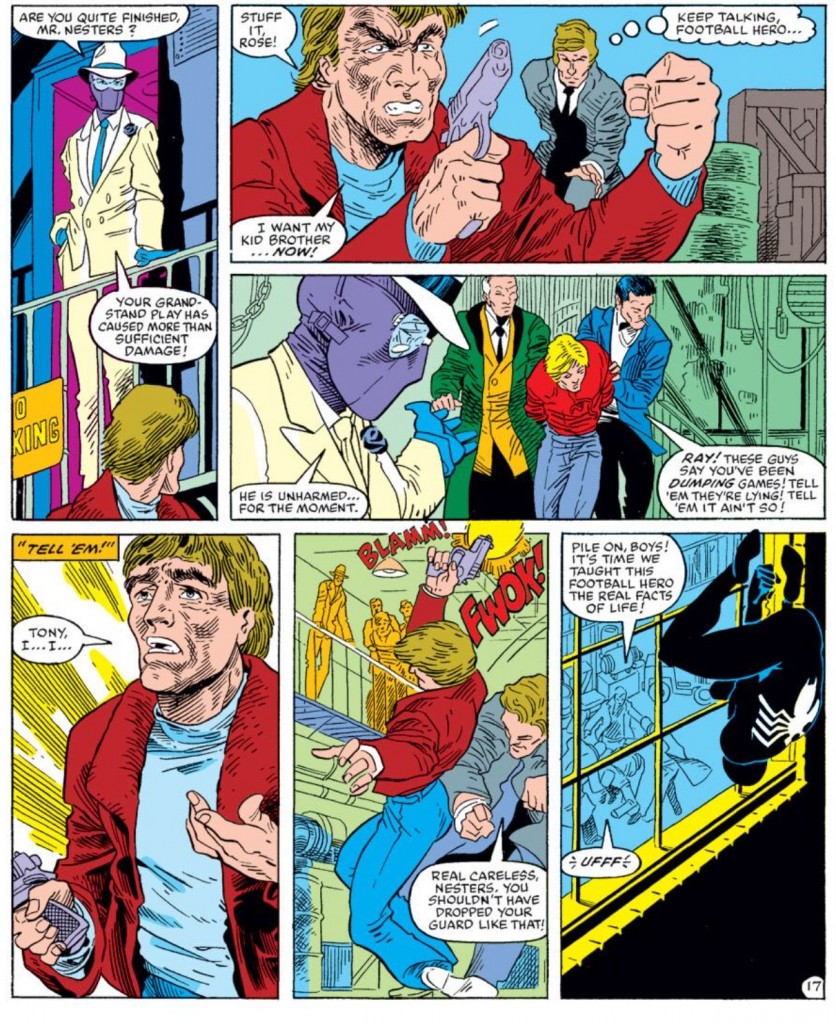 Again, it’s all about having great power and what a person chooses to do with it. And that’s a moral that doesn’t just apply to those with super powers. As the star QB of a professional football team, Ray could have become a champion and a national hero and he instead chose “easy money”  – just like Peter in Amazing Fantasy #15 before the death of his uncle made him realize the error of his ways.

Obviously the “ballad” of Ray Nester has had far fewer consequences on the Marvel Universe than Peter Parker letting a burglar run by him. But DeFalco’s ability to use his 1984 story as a means to draw parallels to one of the most famous stories in comic book history demonstrates just how on top of his game he was at this point in his career.

This article is the second part of Chasing Amazing’s lookback at the “Alien Costume Saga.”