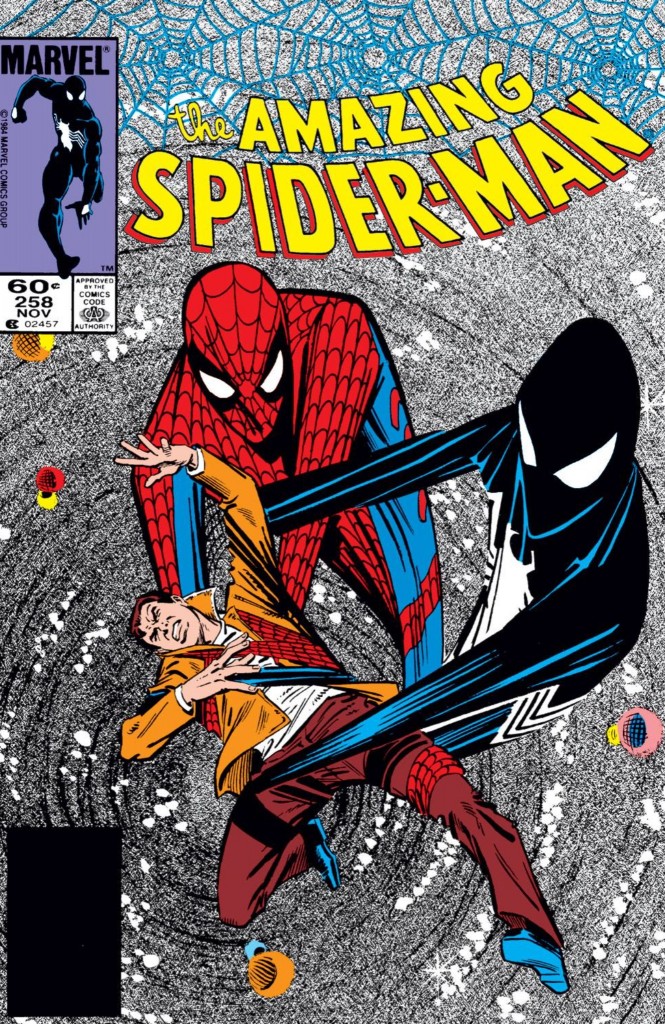 We have arrived at the final installment of my summer overview of the “Alien Costume Saga,” and I hope it’s been as much fun for you all as last year’s “Original Hobgoblin Saga” retrospective. Maybe next year, I’ll pick a run of issues that don’t fall within the 1983-84 timeframe!

I’ve actually talked about Amazing Spider-Man #258 in great length in the past – most notably in an episode of the Superior Spider-Talk podcast where artist Ron Frenz joined Dan and I to chat about this issue specifically. However, I’ll attempt to conjure up some original thoughts about this comic for the sake of tying up these series of articles in some kind of coherent way, rather than telling you to just listen to the podcast yourself (though, you should listen to the podcast either way because it’s a pretty fun interview with Ron).

Speaking on a strictly personal level, this was a fairly important comic book for me as a kid, despite the fact that I was way too young (about 3) to have read it when it first came out. But as I’ve mentioned a number of times before, ASM #300, the first appearance of Venom, was one of the very first Spider-Man comics I ever read as a young fan, and between the grandness of Spider vs. Venom story, and the awesomeness of Todd McFarlane’s (for its time) totally unique and inspiring artwork, I pretty much credit that issue for making me into a lifelong fan of the genre. As years have gone by and my tastes have matured, I’ve recognized that there are definitely a number of “better” Spider-Man stories out there, but I will forever be emotionally tethered to ASM #300, and thereby also hold a fondness to any previous storylines that connect to that issue. 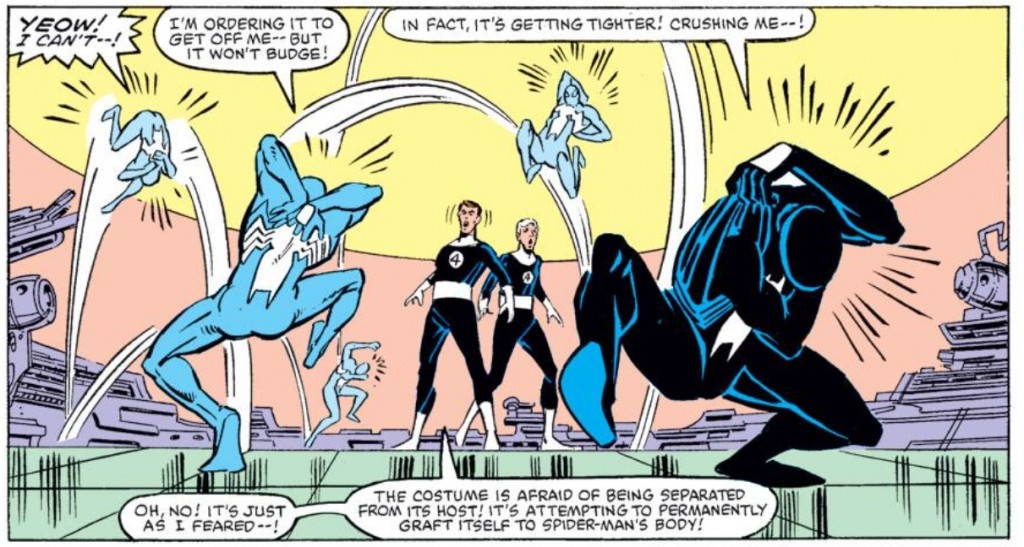 ASM #258, of course, is a very critical part of the larger symbiote/Venom mythos, because this is the issue where the reader learns that this mysterious new black costume Spider-Man has been wearing since ASM #252 (which he obtained in Secret Wars #8), is actually a living entity that is using his body as a “host” and is attempting to permanently bond with him. ASM #300 actually cites this comic as a reference point when it explains Venom’s origins, but for me, I’ll always remember the goosebump-inducting Frenz spread in ASM #258 where is dreaming about his younger self and the black costume and the classic red and blues are playing tug of war with his body.

I believe this page is one of the most memorable images from Spider-Man comics in the 1980s, because of all it represents, and for all it eventually leads to. Whenever I speak to the creators who were involved with Spider-Man during this era (Frenz, Tom DeFalco, Danny Fingeroth, et al), nobody really owns up to what were the long-term plans for the symbiote after the “Alien Costume Saga.” Almost nobody anticipated Venom or ASM #300 – which is understandable since it was more than 40 issues away at that point. But the symbiote is treated with so much gravitas in this issue, I still find it impossible to believe that Marvel was just ready to drop the concept altogether (before fan outcry forced them to bring back the black duds as just an alternative costume). 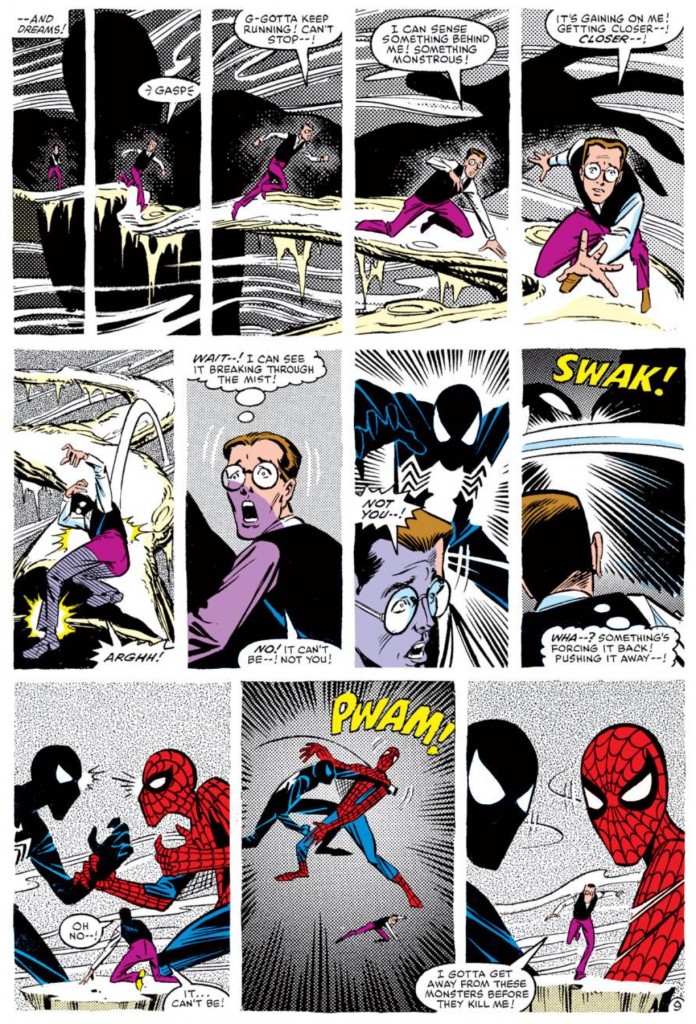 The page also ties-in perfectly to ASM #258’s cover – which doesn’t always get the credit it deserves when people talk about their favorite Spider-Man comic covers. I remember being immediately struck by the cover image the first time I ever flipped past this comic at the old memorabilia/comic book shop I shopped at when I was kid. By that point, I was well aware of the symbiote’s origins, but I had never actually read the original stories where the alien costume first appeared. ASM #258’s cover was so striking, I was immediately able to discern that it was the exact comic where the truth about the costume were exposed. That’s some pretty powerful visual storytelling.

But again, I’ve been mostly speaking about ASM #258 on a deeply personal level. Part of the beauty of this comic is how, regardless of how my opinion of it is influenced by childhood nostalgia, ASM #258 is just a damn fine story that stands on its own, wraps up the “Alien Costume Saga,” and sets up the next wave of DeFalco/Frenz stories that tackle Mary Jane Watson’s origins, the Hobgoblin/Rose saga, the Puma, and a few other assorted bits and pieces that fed into some fantastic and fun comics in the mid/late 1980s. 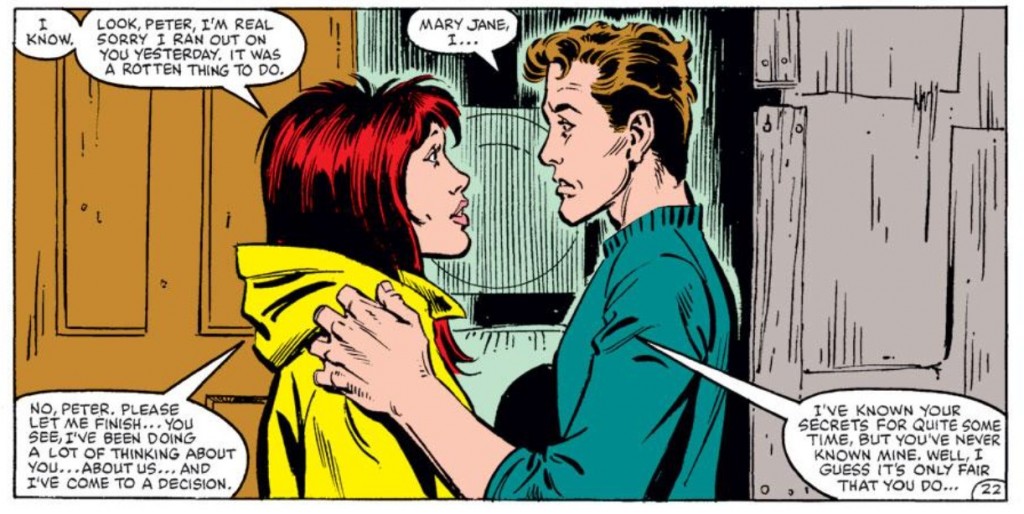 And then there’s the Amazing Bag-Man.

Spider-Man’s bag-man costume might be one of my favorite one-off jokes in the history of the comic book series. In just one snapshot, DeFalco and Frenz were able to capture so many different narrative threads: the infamous “Parker luck,” the Spider-Man/Human Torch big brother/little brother dynamic, and then “anything can happen and be fun” spirit of Marvel Comics.

Regarding the “Parker luck,” I love how this character who had just been through a hardship, discovering that this new powerful costume that he had taken a liking to, was actually a living entity that was attempting to manipulate and bond to him, would then be subjected to an outdated Fantastic Four costume and a paper bag over his head, all in an effort to conceal his secret identity on the way back to his home. 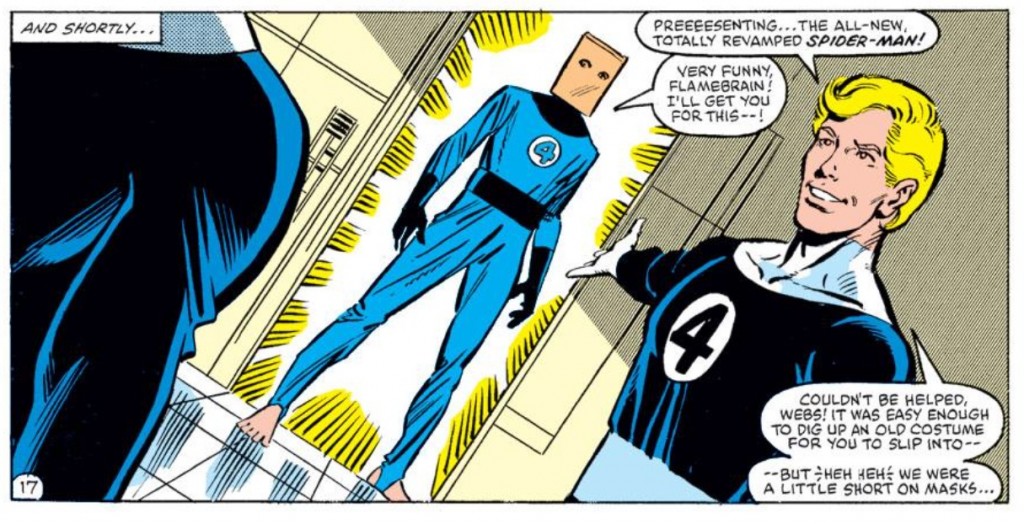 Meanwhile, the added touch of the “kick me” sign courtesy of Johnny is the absolute greatest.

By this point in the narrative, DeFalco and Frenz have moved away from the Spider-Man origin 2.0 vibe that the storyline first gave off in the opening pages of ASM #252. It’s hard to say if by the end of this story, there’s any kind of lesson for Peter/Spider-Man to hang his hat on a la Amazing Fantasy #15 – don’t trust mysterious blobs on planets you’ve never visited before? That’s the best I can come up with.

But the lack of a moral, ultimately doesn’t matter. Instead, the duo just went out there and told an incredibly joyful and entertaining story. One that stands the test of time, regardless of whether or not the reader was at one point, a total symbiote-head like me. I challenge anyone to read this storyline, and specially ASM #258, and not have a huge goofy grin on his face when he reaches the end. That’s what comics should be.