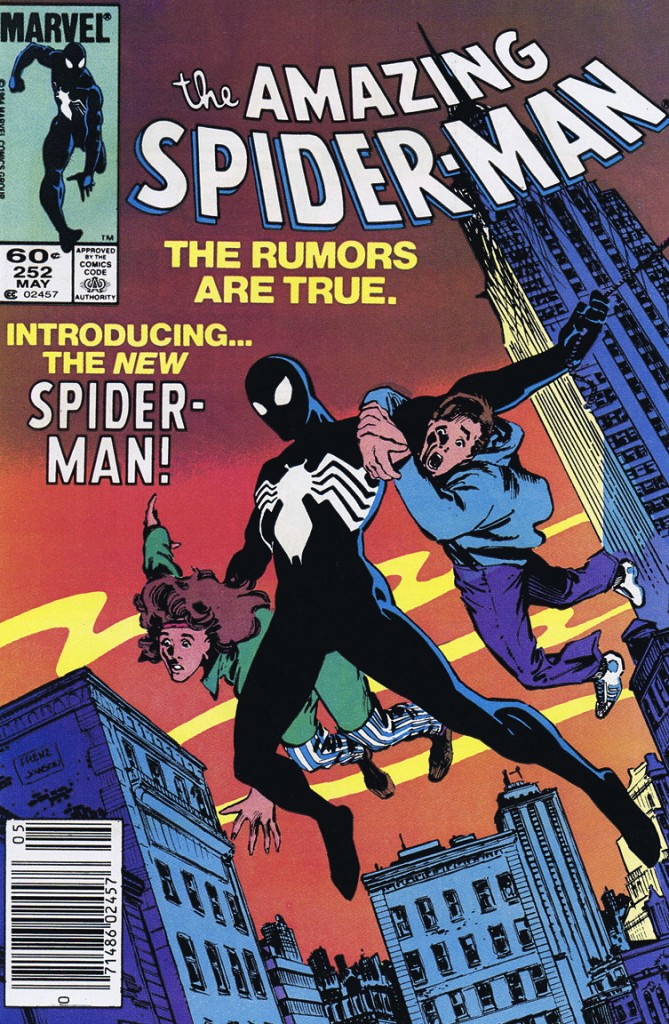 After the success of my issue-by-issue review of the “Original Hobgoblin Saga” last year, I thought it would be fun if I made this kind of long-form storyline analysis an annual summer tradition – call it Chasing Amazing’s “summer concert series” of posts. While I certainly could have been a benevolent blogmaster and solicited my dear readers for their input, instead I made an executive decision to celebrate the 30th anniversary of the first appearance of Spider-Man’s black costume by going comic-by-comic with “The Alien Costume Saga” (Amazing Spider-Man #252-258).

For those who don’t remember last year (which inadvertently inspired this series of articles I wrote for Comic Book Resources based on all of the crazy research I did about the Hobgoblin’s behind-the-scenes history), here’s the drill: every week I’m going to spotlight one of these classic issues until we reach the end of the run. Easy to follow – takes a lifetime to master (or something like that). 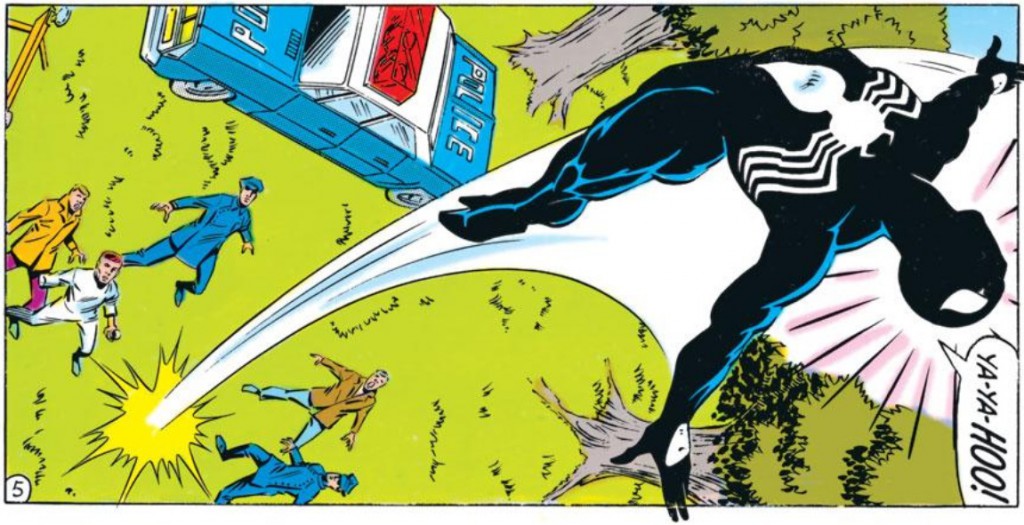 In one of the first posts I ever wrote on Chasing Amazing, I talked about why ASM #252 was such a personally significant comic book to me. As a child of the 1980s, I lived and breathed the black suit, but it wasn’t until I got my magical “big box of comics” that I ever owned this issue and was able to read it in all of its glory.

But beyond nostalgia for costume changes, villains like Venom, and Marvel Secret Wars action figures (all of which contributed to affection for ASM #252), I believe there’s just something so absolutely wonderful and engaging about this comic, so much so that I still get chills and goosebumps thinking about it for the purposes of writing this post.

These warm and fuzzy feelings shouldn’t be taken for granted. Because at its most literal level, there’s not a whole lot of “there there” in ASM #252. In terms of narrative and plot development, our first glimpse of Spider-Man is him (in new black costume)  leaping through a portal of sorts with Curt Connors. 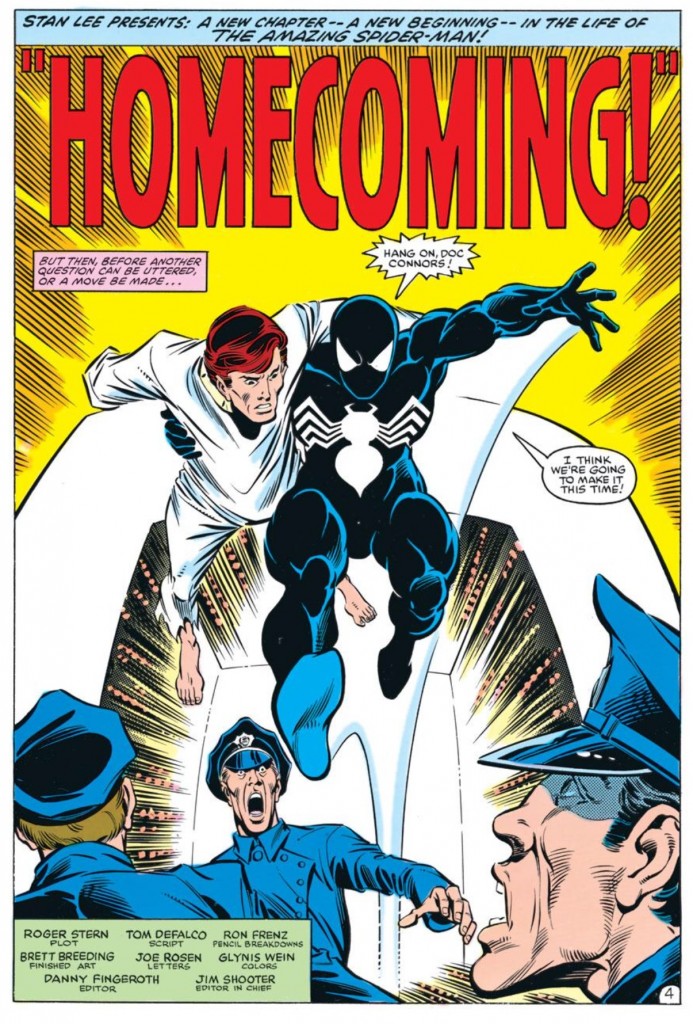 From there, the story meanders a bit as Spider-Man contemplates the strange abilities of his new threads, his relationship with Black Cat/Felicia Hardy, and his Aunt May’s new outlook on life now that she has (what initially appeared to be) a stable relationship with Nathan Lubensky. 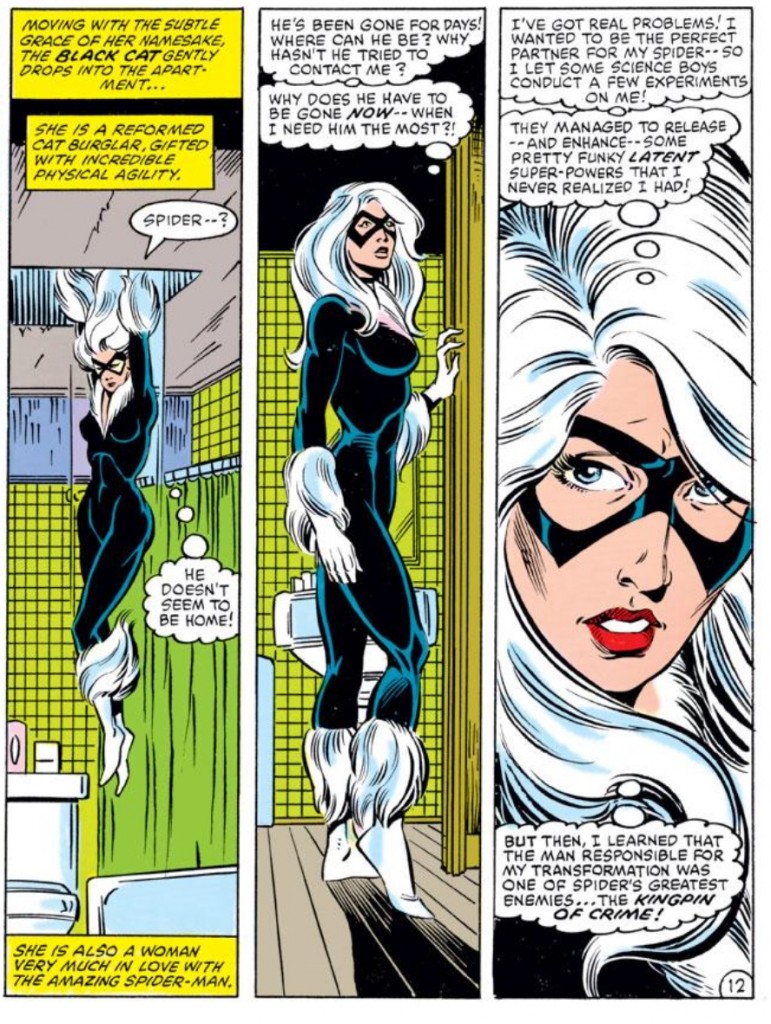 In-between all these minor storylines beats is Marvel’s massively hard sell for its brand new Secret Wars miniseries, which was being released concurrently with ASM (and all of its major titles) despite the fact that continuity-wise ASM #252 takes place AFTER the events of the mini. Because of that, the issue is filled with “wow, wasn’t that strange?” or “the Beyonder is really something isn’t he?” or my personal favorite, “I should destroy all the photos I took because no one would believe this really happened.” So it’s patently clear that the priority of this Spider-Man comic was to shake its readers until they dropped everything that they were doing and purchased Secret Wars (and buy some action figures while you’re at it). 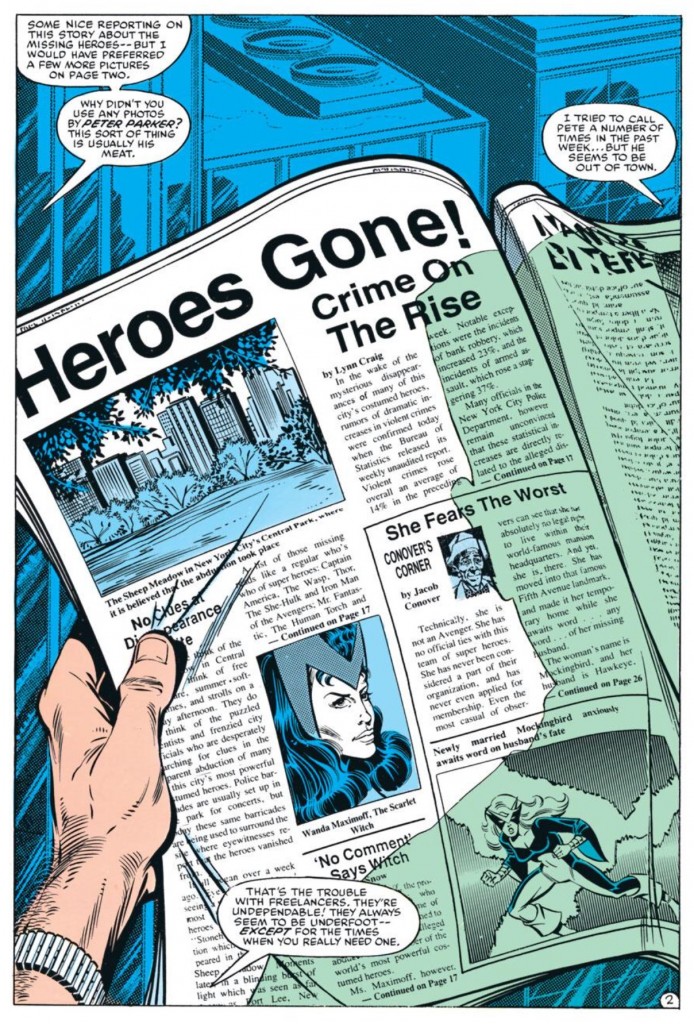 Cynical me should hate this comic book. It’s a marketing gimmick. I was outraged when Age of Ultron ended last summer with a series of commercials and ads for all of the new books and series that were being spun off from the mini’s events. This after everyone who was involved with AoU hinted for months that we were going to get an ending so shocking and explosive, only 5 people in the world knew and there needed to be a black polybag around the comic to help keep the secret.

But here’s where ASM #252 is considerably different from AoU. As the first issue in what has become a grossly underrated creative run in Marvel history, Tom DeFalco and Ron Frenz fill this comic with so much passion and energy, that I’m easily able to overlook all of the salesmanship that is also dripping on every page. 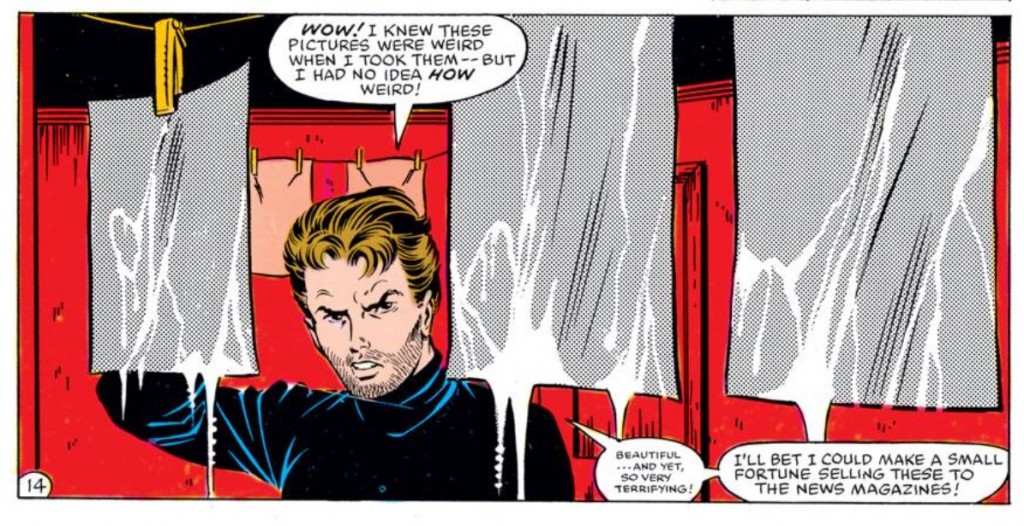 I don’t think it’s any coincidence that ASM #252’s cover image is a direct homage to Spider-Man’s very first appearance, Amazing Fantasy #15. Yes, it is unquestionably a cheeky reference to Spidey’s new costume, but because of the way this comic reads, if ASM #252 was released today, I am absolutely convinced that it would have actually been a very appropriate first issue for a rebooted ASM series. Despite the fact that they were scripting and illustrating a Roger Stern plot (his last one before leaving the series in 1984), DeFalco and Frenz were also very obviously laying the groundwork in terms of tone, characterization and visual style for what they wanted their version of ASM to be.

Don’t get me wrong. I LOVE Stern. He’s unquestionably my favorite writer not named Stan Lee. But by taking this approach to ASM #252, DeFalco and Frenz bring a hypnotic freshness to the series that comes across like seeing a beautiful woman from across the room and having her curl her finger to tell you to come follow her. The comic ends with what editor Danny Fingeroth calls a “pin-up page” (no cliffhangers or drama), and all I want to do is read the very next issue from Defalco/Frenz. 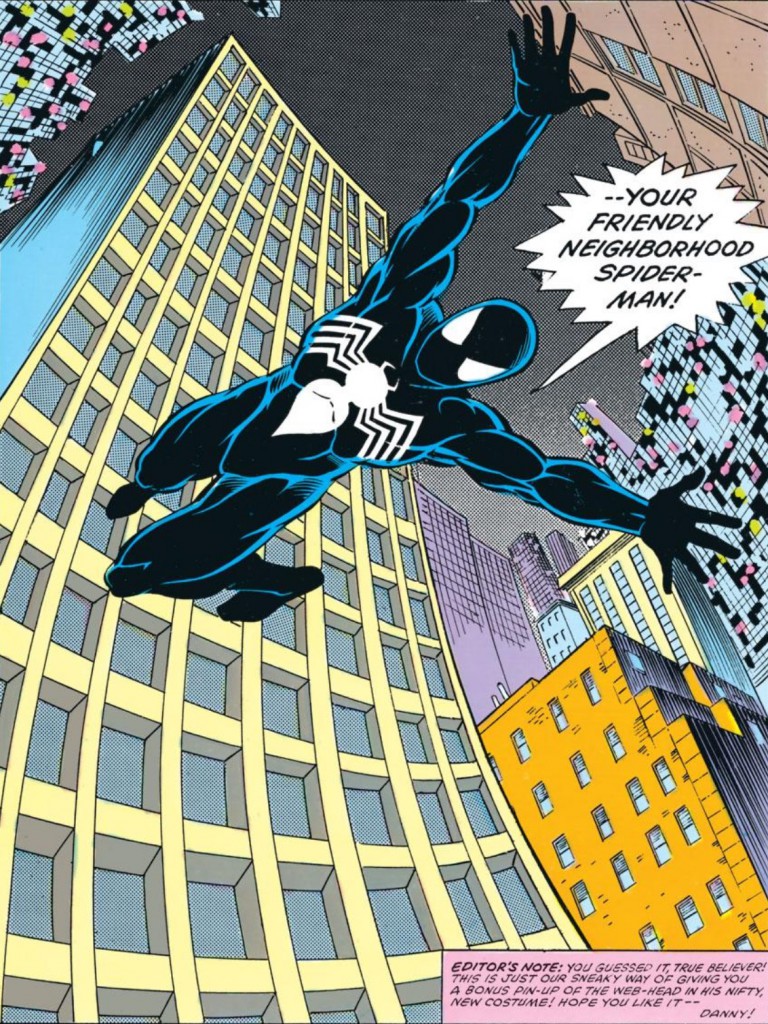 Probably the section of the comic that totally sells me on this creative pairing is when Spider-Man comes across the young couple Justin and Weezie (ok, I have to ask DeFalco about that name the next time we talk to him because there has to be a joke there). The two are arguing with each other, bemoaning the fact that their lives are down in the dumps and hopeless. Spider-Man grabs both of them and goes web slinging, explaining to them that even in dark and dank New York City (it is 1984, after all), there’s plenty to be happy about. It all comes down to your perspective on things and how you approach adversity.

It’s not quite on the level of Spider-Man defeating the Juggernaut, or lifting tons of heavy steel over his head to save his Aunt May, but the optimism of Spidey’s speech is incredibly inspiring. It manages to tow the line between Pollyanna do-gooder and sincerity in a way I don’t think has ever been replicated with the character since. 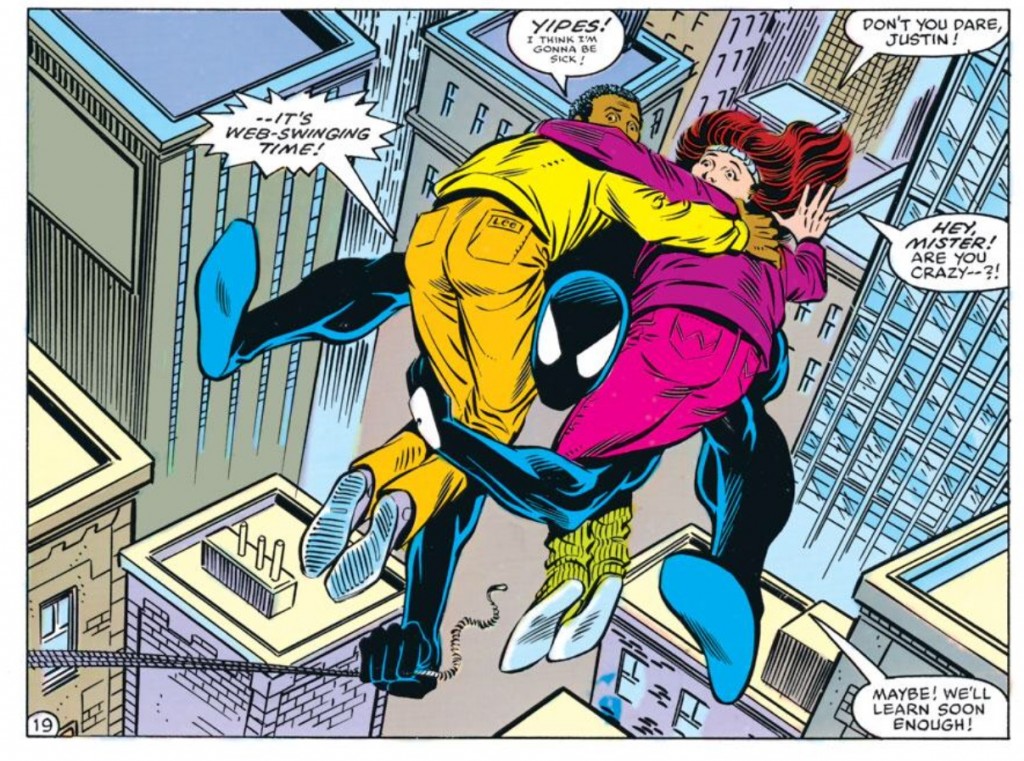 I’m fortunate enough to have been able to speak with both of these guys (Ron on multiple occasions) and I don’t have a doubt in my mind that both sincerely love Spider-Man as a character, and are honored to have worked on some of his stories over the years. But even without that information, ASM #252 reads like a love letter to the world of Spider-Man. These are guys who had a dream – to work in the crazy, sometimes quite cruel world of comics – and ASM #252 feels like a culmination of their passion and hard work.