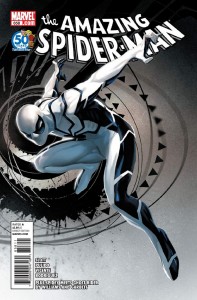 When I first started reading Amazing Spider-Man comics in the 1980s, it was towards the bitter end of the “black suit” saga – the first truly long-standing alternative costume used by Spidey in the character’s history. Prior to that era, it was his traditional red and blues, and after the black suite period, he went right back to his classic costume.

Ultimately, I’m a big stickler for tradition. I was fascinated by the black costume primarily because it was the first radical change for the Spider-Man character and because the suit, which turned out to be an alien symbiote, went on to become a key component of a long-running story arc in the Spider-Man universe involving one of Spidey’s arch villains, Venom. There was a ying and yang/good and evil element to the traditional suit and the black one. That concept was even more apparent when Venom, filled with bad intentions and a strong desire to kill Spider-Man, inherited the black costume. Towards the end of Amazing Spider-Man #300, the first full Venom story, Peter’s wife, Mary Jane, asks him to return to the red and blue suit, so she’ll never mistake him for the psychotic black-suited Venom. He does, and the black costume is never really seen again on Peter Parker until years later when – and if you think this is a coincidence, you’re not paying attention – Spidey goes “Back in Black” just in time for the Spider-Man 3 movie, which also happened to be featuring a bunch of promotional posters with Spider-Man in the black suit. At that point, the black costume wasn’t so symbolic about man’s internal struggle between good and evil. It felt like a marketing ploy.

I’ve brought this all up because the cover of Amazing Spider-Man #658 shows Spider-Man in his brand new “Future Foundation” white and black attire. It also happens to be the third consecutive costume change for Spider-Man in the past three issues. At the risk of sounding like an octogenarian who wants young people to stay off his lawn, this kind of costume changing seems a bit excessive for a character as classic as Spider-Man. 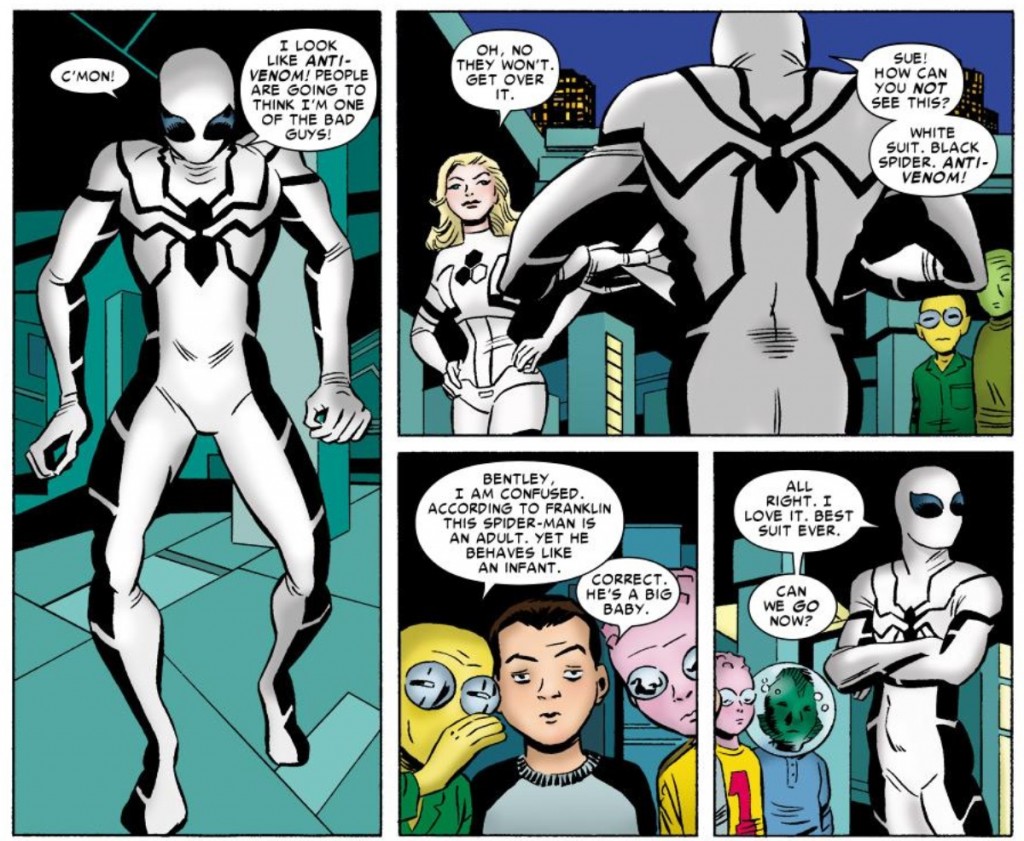 Comics in Crisis is a blog that does a great job pointing out the silly, excessive and over-indulgent aspects of the comic book industry. A recent post over there ranks Spider-Man’s costume choices over the years, and as I was reading, it struck me how so many of these new suits had debuted in the past couple of years. It used to be Spider-Man would go decades between a radical change in apparel, but those guidelines have seemingly been relaxed. On one end, character evolution is a good thing. In a comments section at another blog, one person said their biggest complain with a serial comic like Amazing Spider-Man is that characters very rarely grow and develop. There’s a sense of purgatorial stasis in serial comics compared to a graphic novel that has a beginning, middle and end. I do happen to believe ASM is a series that does show character growth better than others – it’s one of the primary reasons why I enjoy reading it – but I can’t say I necessarily disagree with this one poster. 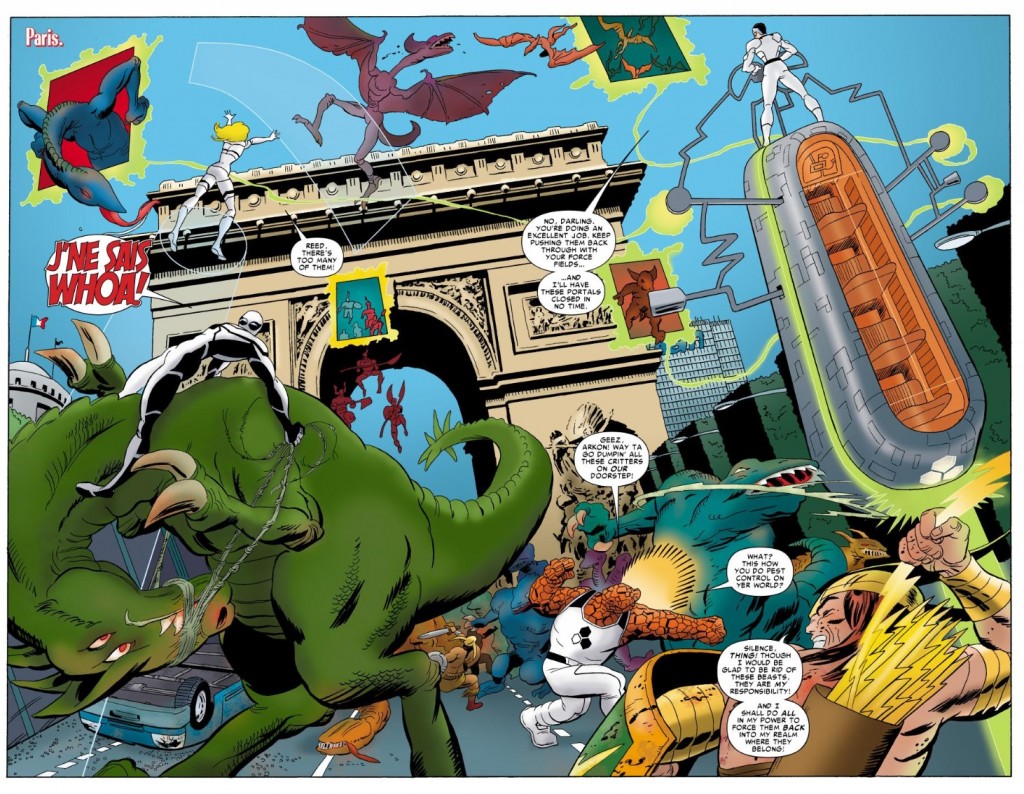 But in this case, it’s not the change of costume I object to, but rather the frequency of the changes. Just two issues ago, Spider-Man had donned his new “Spider Armor” to compensate for the fact that he had lost his Spidey Sense reflex and he needed additional protection for gunfire. So if this is the new world order for Spider-Man, why not stick with the armor for a few more issues. Instead, he’s back in his red and blues for the next issue when he visits the Fantastic Four, and then he’s changing it up again to get into Future Foundation apparel once he officially joins up with that group. ASM 658 even pokes fun at all of the costumes by showing Spider-Man in the classic blue Fantastic Four outfit (complete with the encircled “4” on the chest) which he pulls “out of his closet.” After the surviving three members of the Fantastic Four scold Spidey for the costume choice, he gets into the futuristic FF whites. What other costumes does Spider-Man have in his closet? How about a Thor helmet to tie into the movie that recently came out? 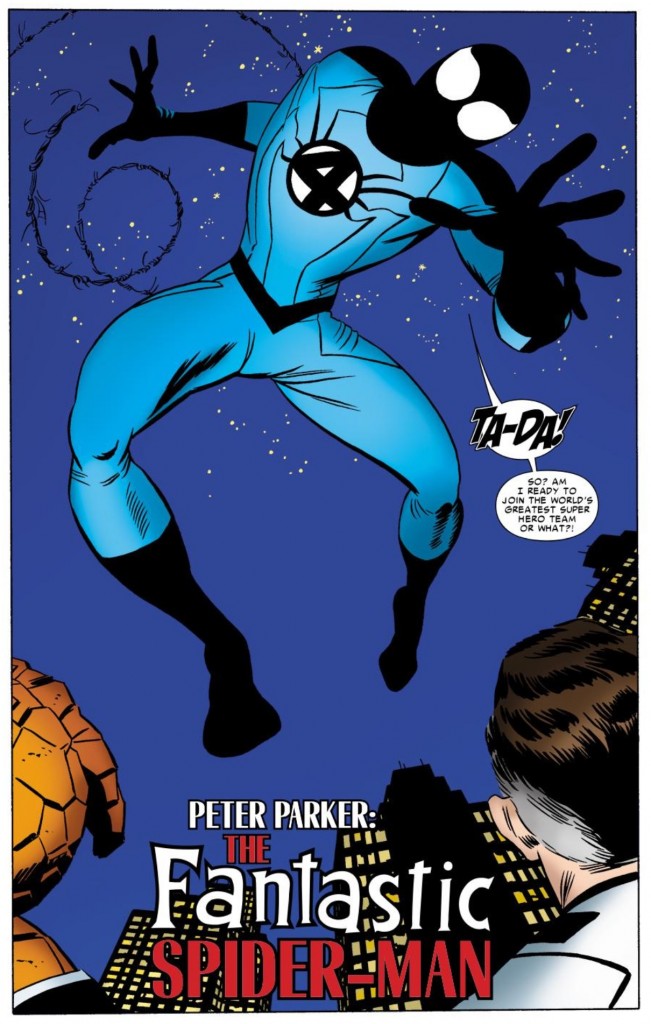 Rationally speaking, the costume choices really shouldn’t matter this much to a reader unless the apparel changes something drastically about the character. The Spider Armor from ASM 656 was seemingly going in that direction, until the Fantastic Four storyline made it take a U-Turn. Whether he’s wearing his red and blues, or FF whites, he’s still “your friendly neighborhood Spider-Man.” It’s just that for the sake of some consistency, I hope he can learn how to dress himself the same way for more than a few issues in a row.