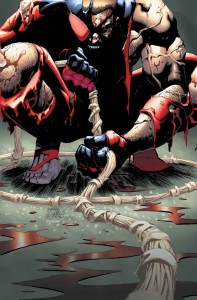 I think in many ways I have been more enamored with the idea of Scarlet Spider rather than its actual execution as a comic book series.  Longtime followers of this blog will note that I’ve long had a soft spot for it; in large part because it started off nicely enough that I then I found myself sucked in to Kaine’s universe despite my initial doubts and my overwhelming disgust for the “Clone Saga.”

And yet, I’ll be the first to admit that this series has lost a step or two over the past calendar year. Somewhere around the time that Kaine fought the Lobo Brothers and came back as “The Other,” writer Chris Yost ran out of steam and the title was caught in some kind of limbo until the “Into the Grave” Kraven the Hunter kicked off (which wasn’t really a GREAT story, but definitely felt like a needed conclusive “end game” arc).

I agree with the Yost’s sentiments at the end of Scarlet Spider #25 – the series finale – that it’s a major accomplishment for a series as niche as Scarlet Spider to have lasted for two years in this current comic book publishing environment. For that alone, Yost and Marvel should take a bow. That doesn’t change the fact that I wanted substantially more from the finale than what I got.  Scarlet Spider #25 is unfortunately another instance where the comic’s flaws are so numerous and problematic that I can’t dismiss them and just “root” for the series in its final days. It features a trifecta of frustration for me as a comic book reader:  older storylines that are never fully developed or explained being brought back seemingly out of nowhere; character relationships aplenty that I just don’t care about; and a muddy resolution to Kaine’s arc that comes across as being nihilistic and pointless. 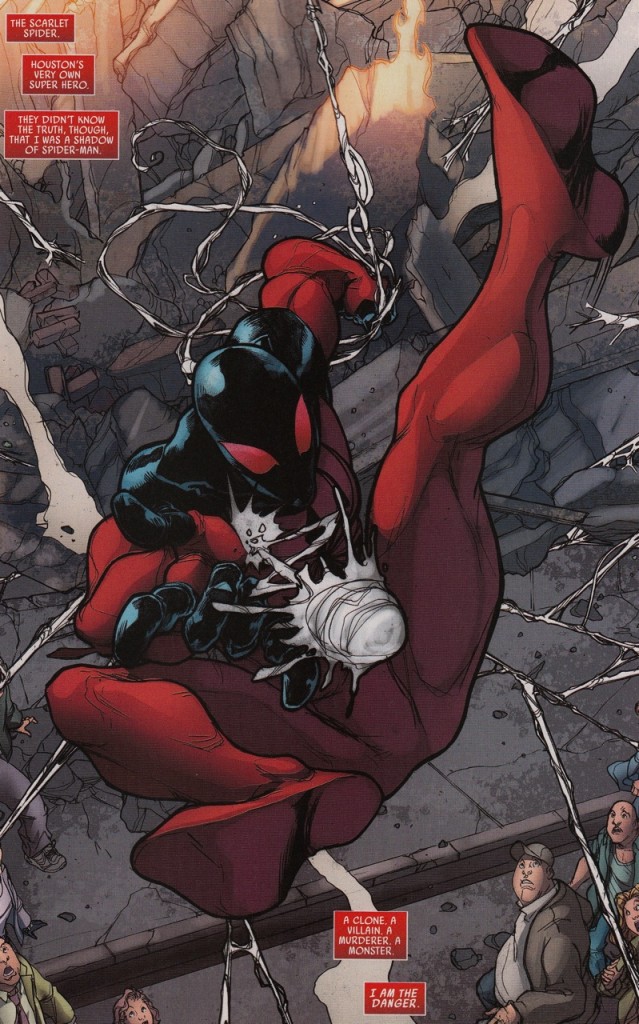 Let me deal with the last part first since I think that’s the most critical complaint I had with this comic. When the first issue of Scarlet Spider began in 2012, Kaine’s ability to be a “hero” appeared to be the central theme of the series (hence the, “all the power, none of the responsibility” tagline). After the first few issues showed Kaine settling in Houston and beginning his unlikely journey as a hero, I assumed the series would continue on this path and show Kaine’s evolution as a more clear-cut good guy/anti-hero with some customary bumps and bruises along the way.

But that’s not what ended up happening. Instead, this final issue reads like I just walked in a big two-year-long circle and found myself exactly where I started – Kaine doubting himself as a hero, promising to work alone, and demonstrating no growth, evolution or really anything that makes me want to continue reading about this character when he joins up with the New Warriors in a few months. 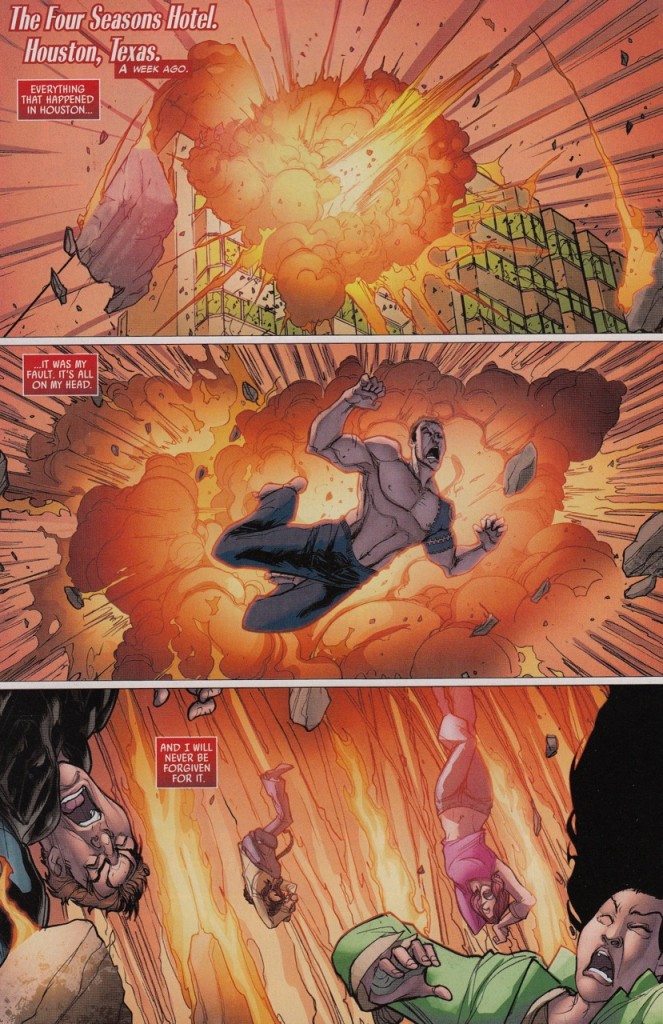 I’m going to give some benefit to the doubt that once the handwriting was on the wall for Scarlet Spider and New Warriors became a reality, Yost decided he would save some growth and evolution for Kaine for this new series. But whatever Yost has in the works for next year shouldn’t have come at the expense of accomplishing next to nothing with the character in his own series. I’ve spent $2.99 a month (and $3.99 for this final issue despite no bonus content or digital copy – thanks for the holiday gesture Marvel) on Scarlet Spider for the past 25 months. I should have gotten the impression that Kaine at least had learned something from this journey that I dedicated the last two years of my life following, instead of a finale that was more setup for the next chapter than anything else.

If the moral of Kaine’s story is that because he’s the demented, “unwanted” clone, no amount of heroics or good deeds will ever make him believe in himself, then Yost should have raised the stakes a bit more in the preceding issues to make this crippling case of self-doubt more palatable. There was the threat that one of his supporting cast members, Donald, might die after he was gutted in front of Kaine by Ana Kravinoff, but Yost took a wishy-washy approach to his story, having him survive the initial injury but putting his recovery in doubt. Then there’s the police officer (and Donald’s partner) Wally, finding out that Kaine is a wanted man, but still defending him in the series finale . For both of these subplots, Yost is stuck being non-committal about these characters and their relationships with Kaine, and I think it makes the resolution of the series all the more anti-climatic. 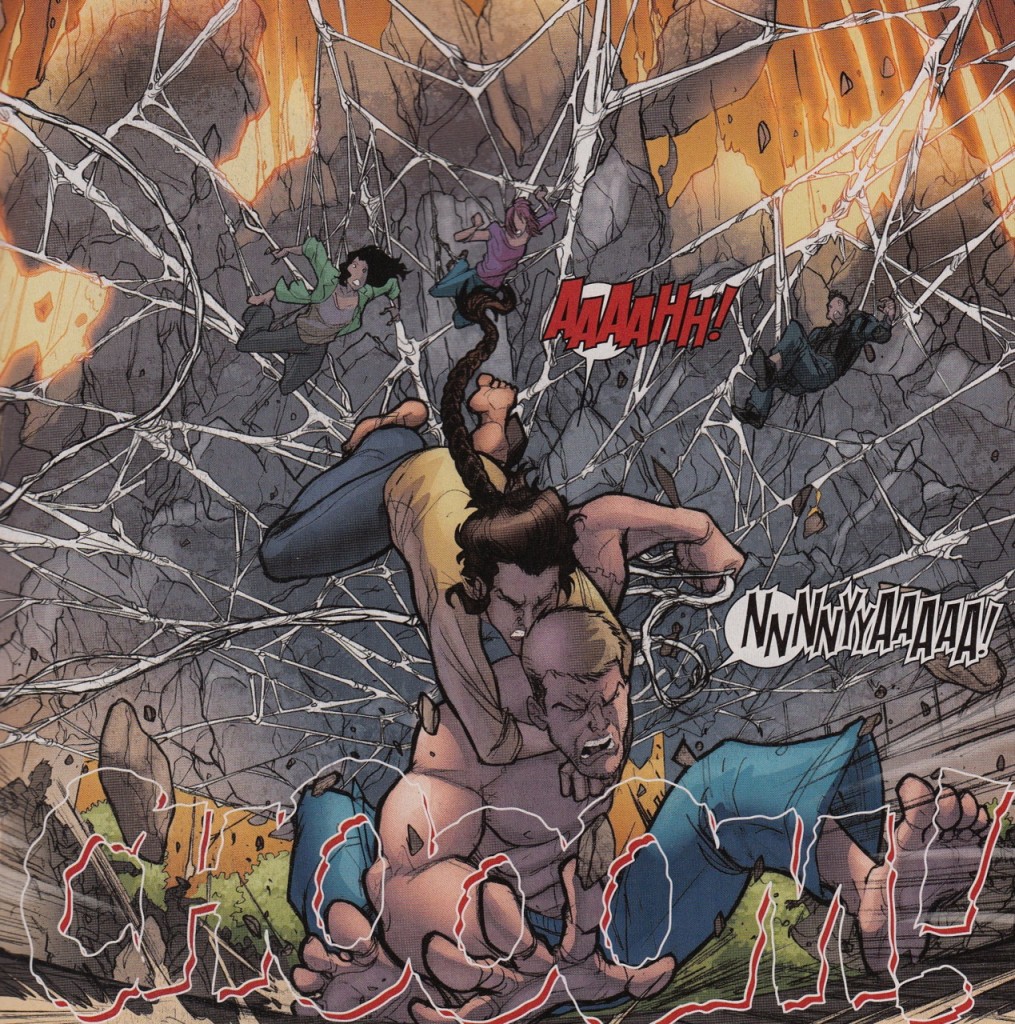 Meanwhile, outside of Kaine’s relationship with the psychic Aracely, I still don’t find any of these character dynamics to be the least bit compelling. I mentioned in my last write-up that the apparent death of Wally could have been a landmark moment for the series if I could remember one thing Wally did in an earlier issue that made me care about his fate. The same could be said about Donald and Annabelle in Scarlet Spider #25. Annabelle … wasn’t that Kaine’s girlfriend? When was the last time she did anything that mattered in this series? And I’m supposed to be broken about the fact that Kaine’s romance has been ruined because he turned into an arachnid monster (aka, “The Other”) in front of her in this issue?

Which brings me to my other complaint: the series took a hard right when it tied-in some of J. Michael Straczynski’s philosophizing from the mid-2000’s when it gave Kaine the powers of “The Other,” but I bought into it initially because I thought it had potential to be an interesting character turn. Instead, these powers and the monster Kaine becomes when using them was put aside for a handful of issues, only to suddenly reappear again in this one last issue. 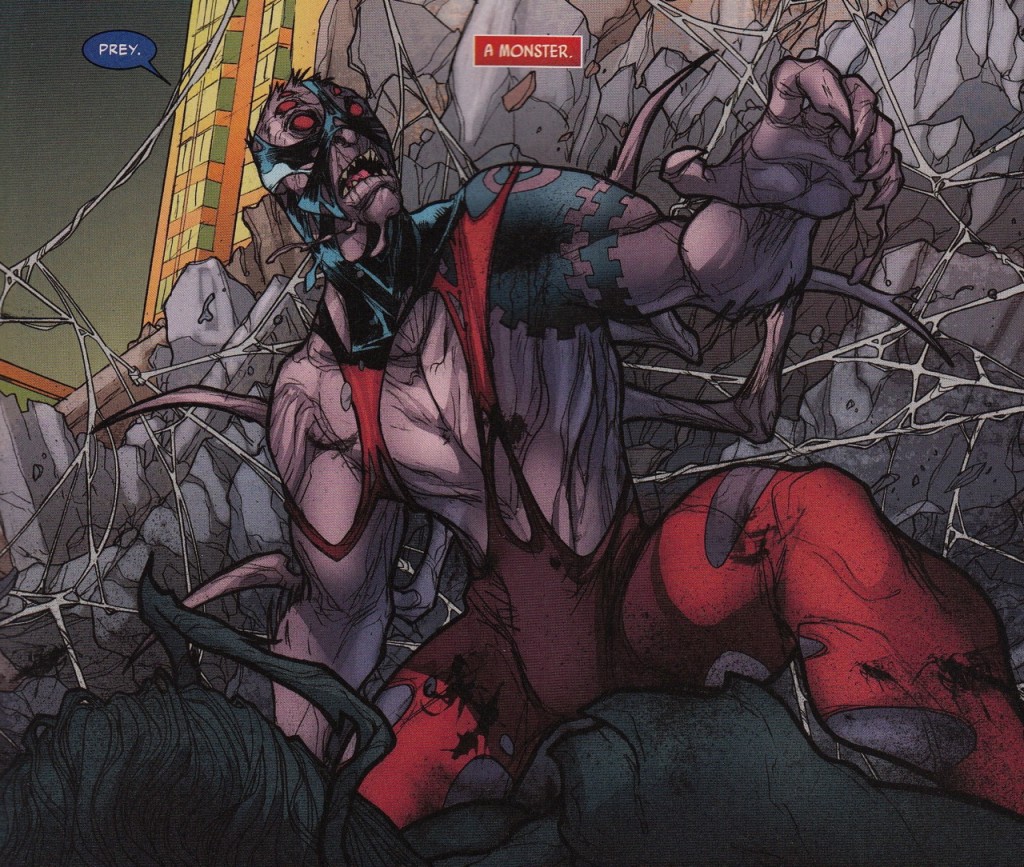 The way all of these character and prior storylines were deployed smacked of a writer throwing everything and the kitchen sink into one last issue in an attempt to show “resolution.” But instead things were left even more untidy. If Kaine was capable of becoming “The Other,” why didn’t he use those powers in his battle against Kraven (or during his team-up with Wolverine this past summer)? If Kaine’s relationship with Annabelle was going to figure so significantly into the finale, why didn’t we get more scenes of them acting like a couple leading up to this issue?

What’s funny to me is that for all of the horn-tooting Yost and Marvel have done about their shock and disbelief that Scarlet Spider has lasted as long as it did, you would have thought that a more definitive end for the series would have been mapped out. I said in my Venom post that I’m sure no no comic book writer wants to believe that their title can be cancelled at any moment, but like Cullen Bunn and Venom, I have to think that at some point in Scarlet Spider’s second year, Yost and his editors sat down and talked about what might happen if this series no one expected to succeed were to have its plug pulled.

I continue to believe that there’s some potential with Kaine as a character in the Marvel universe, but after the circuitous journey Yost took me on in Scarlet Spider, I’m cautious about becoming too invested in New Warriors in a few months. I’m likely to buy the first few issues, but if it doesn’t pass the sniff test quickly and if I don’t see some real growth from Kaine (and there’s going to have to be something happening in the growth department if he’s willingly working on a team with other superheroes), I will likely drop it and not look back until another writer has been assigned to the character.