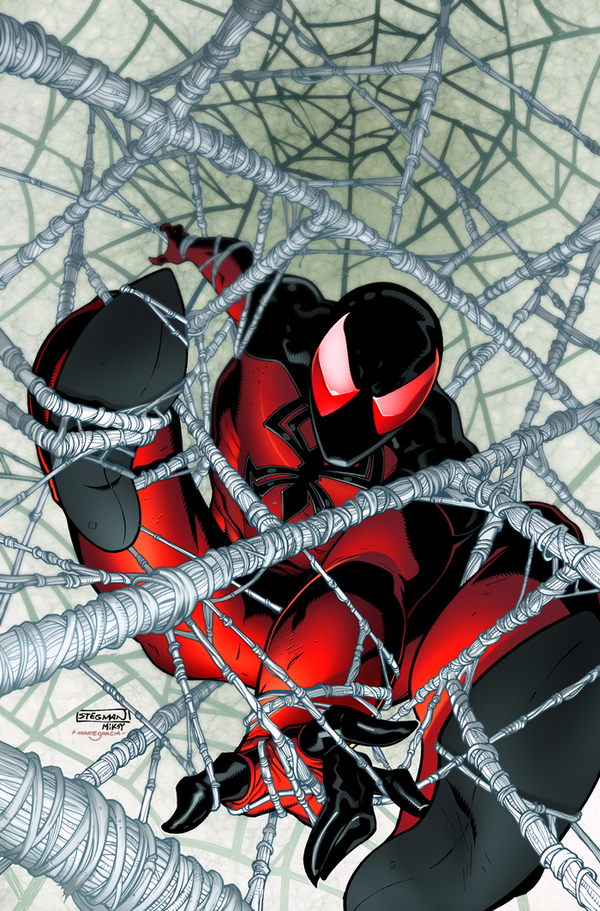 The 1990’s Clone Saga was a dark time for my comic book fandom, a true test of my will and tolerance for nonsensical writing and the “can you top this” attitude that accompanied the industry’s boom and bust during the same time period. That’s why the mere mention of the words “Scarlet Spider” send chills down my spine.

And yet, here I am, nearly 20 years later and wiser, back into the comic book collecting game and in fact, just a mere seven issues away from achieving my goals of having every issue of Amazing Spider-Man (for those who continually ask, I am not counting variant covers in this mess of a collection). Later today, I’m going to go the comic book store near my office, plop down the $2.99 or $3.99 required of me and grab issue #1 of a brand-new Scarlet Spider series starring Spidey’s clone Kaine.

I think what really got me hot and bothered by the original clone saga was the fact that in an effort to “shock” people, a decision was made at some point that the “clone” was the “actual” Peter Parker and the guy we’ve been reading about since the clone first appeared in ASM #149 was the faker. It was the kind of editorial decision that I believe was made just to upset people. In reality, what actually “changed” with this reveal? The 250+ issues of comic books that occurred between the Clone’s first appearance and the big reveal with Peter still happened – major moments in ASM history still occurred, such as the first appearances of Hobgoblin and Venom, Peter’s marriage to Mary Jane, the stunning return and then disappearance of Peter’s parents, etc. While this reveal was designed to be a life-altering moment that was certain to change the status quo of the Spider-Man universe, Marvel’s creative forces couldn’t take away those existing comic book-related memories and experiences. The same rule applies year later when Marvel eliminated Peter’s marriage to Mary Jane. Yes, the status quo was changed, but I still owned the wedding issue. I still remember MJ cowering in the corner from Venom. I remember all of these things because they happened, regardless of any editorial mandate from on high.

What has softened me so much to this new Scarlet Spider series is the fact that Marvel is clearly going for its own thing here. After reading the Point One issue which teases this new series, it’s clear that they’re not even going to set this series in New York. Kaine is on the run from police and the Avengers and finds himself in Houston. I’m sure there will be some interaction with Spider-Man villains, just as Flash Thompson/Venom has been dealing with the likes of Jack O’Lantern and Crimemaster in his own series, but the Scarlet Spider is going to have his own adventures, without it co-opting the status quo of the series that really matters to me emotionally, Amazing Spider-Man. So what harm is there in picking up the debut issue and seeing if this is something I can get into over the long-term? That’s what I inevitably did with Venom and haven’t looked back since.

I’ll eventually have my thoughts posted on the first issue and we’ll take it from there. But there’s a part of me that’s impressed by my change of heart. Keep in mind, I was 13-years-old when the Clone Saga and the Scarlet Spider turned me on comic books. Something that teenagers have in short-supply is patience. The other thing is emotional stability. For whatever reason, I viewed Marvel’s attempt to do something different with a long-time character personally. I was hurt that they would attempt to change the status quo so dramatically for my favorite comic book. But today, if Marvel went I that direction, I can either give them my patience and wait it out to see if a Brand New Day will lead to a Big Time and an even better Spider Island. And if it doesn’t, I can vote with my wallet. With age and experience, life has become that much simpler now.