I feel like almost every month I find myself defending my adoration for the Scarlet Spider series even though I can never exactly pinpoint what I like so much about the title. Is it the writing? The art? The characterization of Kaine? His supporting cast? His rogues gallery? There are elements of all of these things that I see positives in, but nothing truly exceptional that I can lean heavily on while debating Scarlet Spider with someone who thinks the whole “let’s revisit the positive parts of the Clone Saga” experiment is a giant waste of their time. Perhaps, as the old adage goes, the sum is greater than its parts. 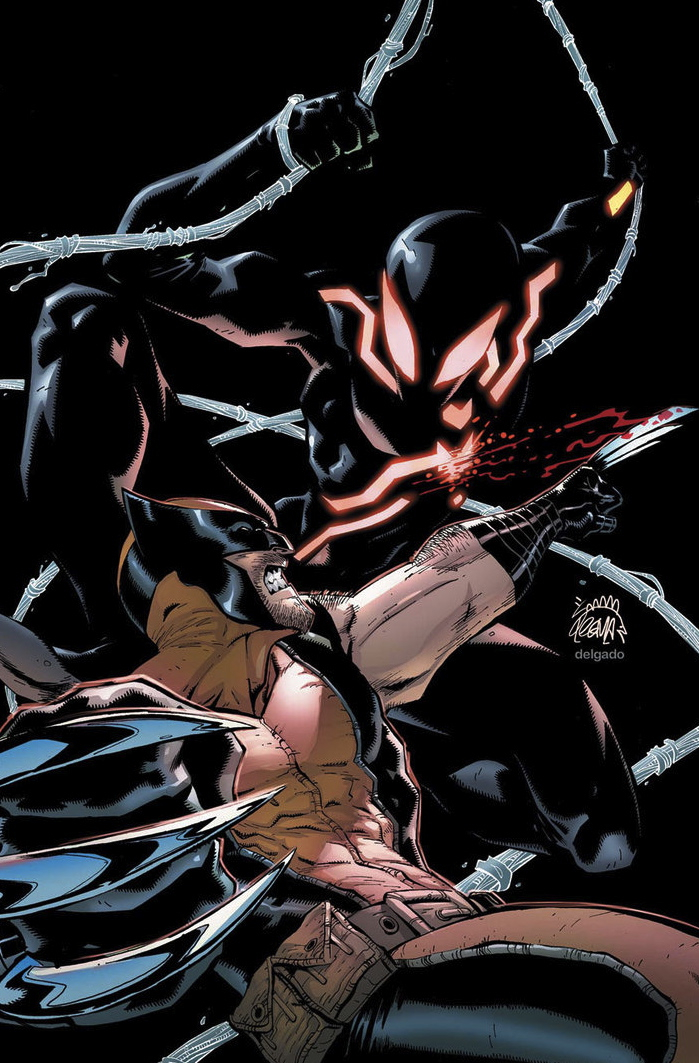 I’m assuming that more eyes were locked on Scarlet Spider for issues #17-19. In a sign that the series is struggling with its sales (certainly not a well-kept secret, and a part of me wonders when exactly the axe is going to fall and cancel it), Wolverine was injected into the comic for a three-part arc that dealt with Kaine first coming to New York to kill the Canucklehead, and then teaming-up with him in a battle against the Assassin’s Guild and the mutant villain Candra (aka the Red Death). As Marvel’s most popular property (is that claim even up for debate anymore?), parachuting Wolverine into a title is an old 1990s “Chromium Era” trick to get people to buy a comic book.

Of course with great Wolverine crossovers comes the responsibility to hook all your new readers to the series, and as someone who has been on board with Scarlet Spider since issue #1, I just don’t know if Chris Yost and illustrators Carlos Barbieri and Ale Garza did enough to distinguish this title from the wave of other comic book series flooding the marketplace. I thought the arc was good, not great. Some elements of the Wolverine/Kaine team-up worked well, and other things probably went over people’s heads or further frustrated the folks who are waffling about investing in the series. Perhaps the arc’s biggest accomplishment was moving Kaine from Houston to the New York City-area just in time for his much ballyhooed confrontation with the Superior Spider-Man later this month. Then reportedly next month, the original Spider-Man clone, Ben Reilly, is going to make an appearance in the book. This could either be the creative apex of Scarlet Spider or the signs of a last-ditch effort to save the series before Marvel finally decides 16,000 units a month is not enough to justify the cost of printing this thing anymore. 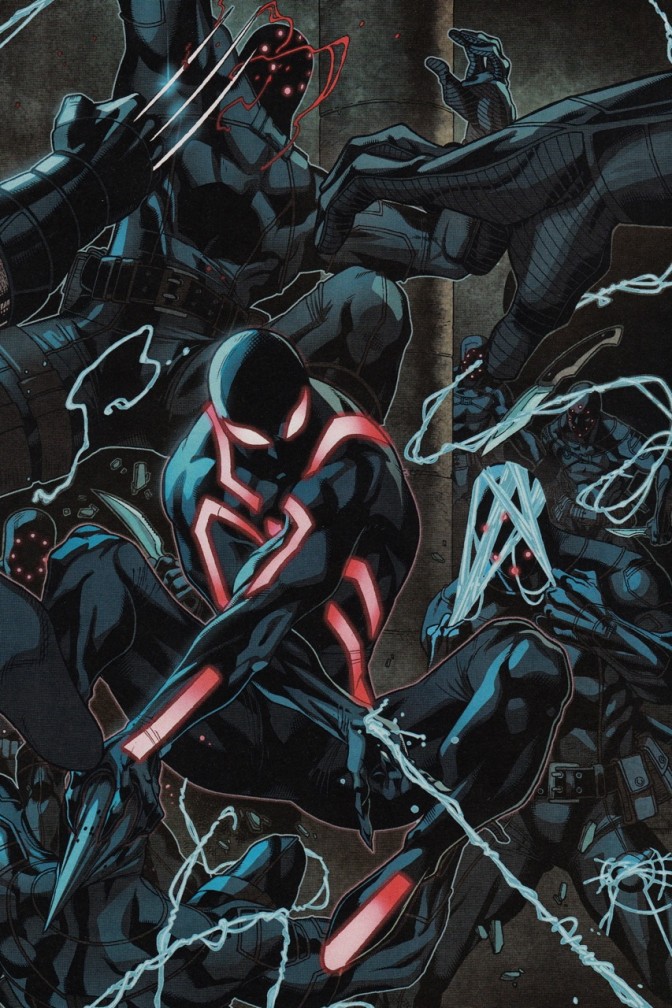 Either way, I still think there’s a place in this comic book marketplace for a series that focuses on the somewhat deranged, somewhat misunderstood clone of Peter Parker, and this three-issue arc illustrates some of my reasoning. One thing I’ve heard from some critics of Scarlet Spider is that the new status quo involving the “Superior” Spider-Man has taking the buzz away from Kaine being the “bad boy” version of Spidey. But I found the dynamic between Kaine and Wolverine to be considerably more entertaining in this three-part arc than anything I’ve seen from Spider Ock and Logan since January.

For one, Kaine is dark and twisted enough to actually attempt to “kill” Wolverine per the order’s of the Assassin’s Guild and at the end of issue #17 he looks pretty damn successful in his first go at it. And yet after Wolverine’s ever-strengthening healing factor saved the day (again), I enjoyed the fact that the two were able to come to an understanding about the difference between what’s business and what’s personal. It’s not like Wolverine has shied away from being a hired-gun for somebody, especially in his pre-X-Men days. 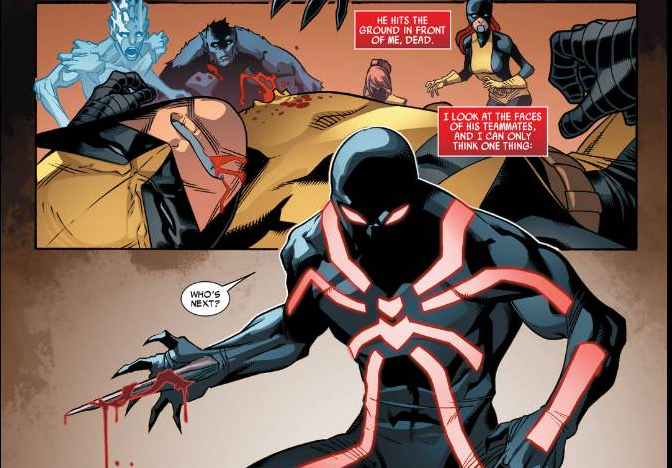 But the dynamic evolves even more in the arc’s final chapter when Wolverine finds out that Kaine has been dealing with Kingpin under the table. While Wolverine is not one to usually past judgments, even he’s ticked off by this reveal, claiming that Kaine is making a deal with a “devil” who one will eventually come back to the Scarlet Spider expecting the debt to be repaid. 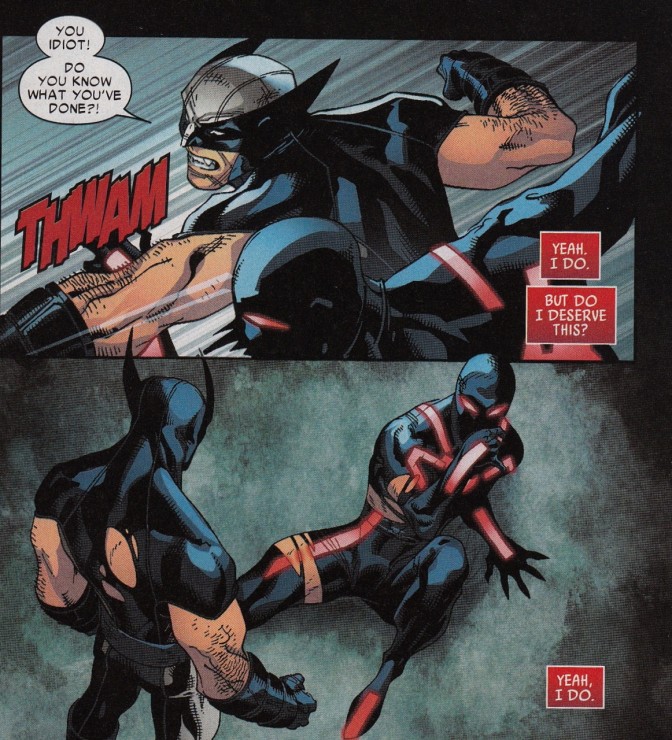 Ultimately, the Kaine/Wolverine dynamic was nothing revelatory, but was also “different” enough. Wolverine and the “real” Spider-Man, Peter Parker, have had so many interesting team-ups and crossovers, including the Spider-Man vs. Wolverine one-shot I wrote about a few weeks ago that I’m glad Yost didn’t just trace over old storylines using Kaine in Peter’s place. 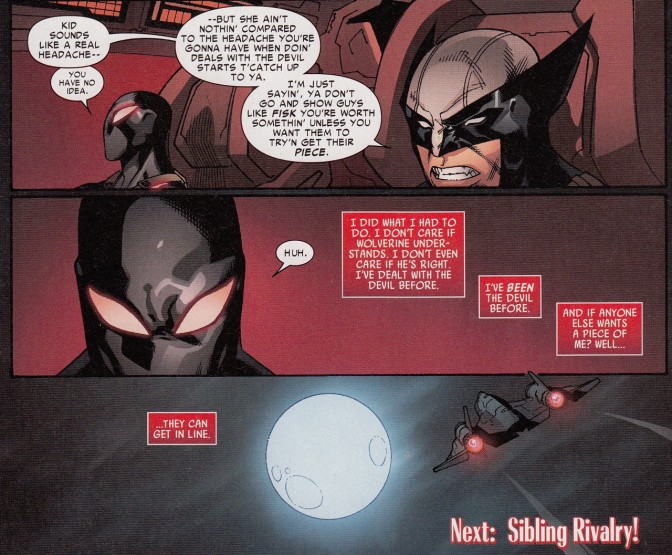 Beyond the obvious crossovers that are coming next, I’m curious to see how being in New York City affects Scarlet Spider in the short-term. When the series first debuted last year, the first thing I picked up on that I sincerely enjoyed was the fact that Marvel placed Kaine in Houston where he would have his own adventures with his own supporting cast and adversaries. While more recognizable characters probably sell more comic books, there’s something to be said about the creative license that comes with having an entire world to play around with. I like Scarlet Spider and I want to see it succeed. I just hope the generic-ness of throwing him out there with Wolverine and New York City is not the undoing of this series if the sales numbers don’t come back at a number Marvel can get behind.