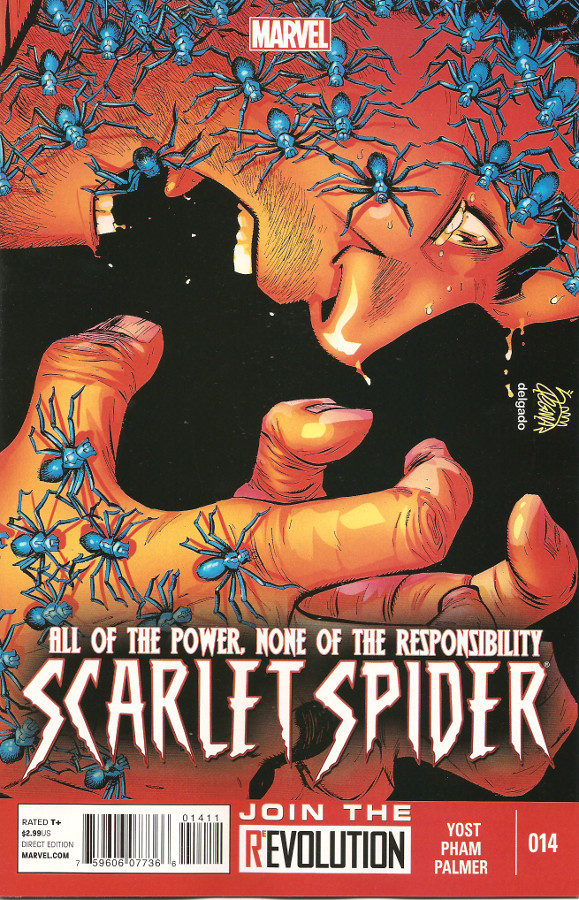 I was recently thinking that the Scarlet Spider series was in many ways, the most well-rounded and intelligently plotted Spider-Man universe comic books on the market right now. While I still believe that, I must admit I was a little surprised when the series took a shocking left turn in Scarlet Spider #14 by referencing a mostly reviled arc from Amazing Spider-Man’s past.

After being left for dead by Los Lobos at the end of Scarlet Spider #13, we find out that Kaine/Scarlet Spider has in fact “died” and is now undergoing a resurrection through the powers of “The Other.”

That’s right, Marvel is going back to the “Spider Totem” well from J. Michael Straczynski’s early/mid-2000s run on ASM. The whole Spider Totem thing has always been a mixed bag from me. I loved the idea that there was maybe something more “mystical” about Peter Parker when JMS first suggested it during the initial Ezekiel/Morlun arc (ASM #30-#35 v2). It was a daring and new take on the character that actually wasn’t THAT far of a departure from Spidey’s origin. The whole concept could be rendered down to a simple question – did Peter acquire his powers from bite of a radioactive spider or was there something inherent about his abilities that the spider-bite brought to his attention? 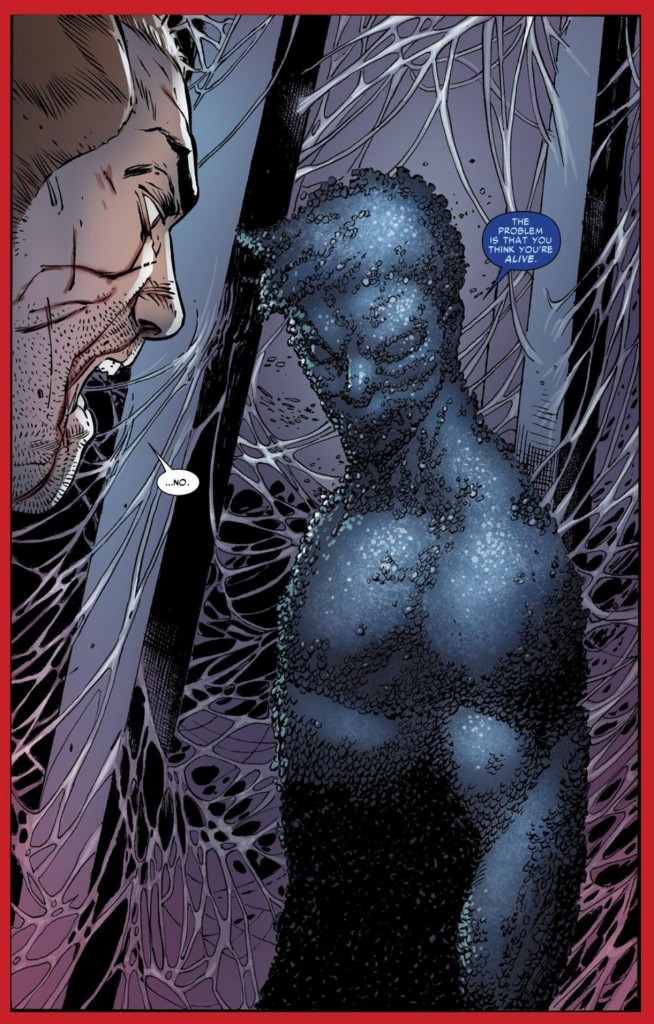 But “The Other” arc, which traversed the pages of ASM, Marvel Knights and Friendly Neighborhood from late 2005-to-March 2006 took the mystical elements of Spider-Man’s powers a bit too far. During this storyline, Peter physically dies in battle with Morlun but is reborn by literally shedding his skin and embracing his “other” spider side. Beyond the ability to cheat death, by embracing “the other,” Peter also acquired new and improved powers like slick night vision which he uses to rescue people from a collapsed building. These powers were mostly ignored during the hard Spidey reset brought on by the One More Day/Brand New Day arcs.

My biggest issue with The Other is the fact that its otherworldly qualities changed the entire tone of Spider-Man and ASM for me. Like millions of other fans over the past 50 years, my affinity towards Spider-Man is his relatability as Peter Parker. The first time I opened a Spider-Man comic, I found a character who wasn’t THAT much older than (granted I was 7 at the time), who had real problems centered on familial and social relationships that I could understand. Guys like Steve Rogers and Tony Stark represented the “adults in the room” so-to speak, while Peter was still just a snarky kid. While I’ve come to appreciate the “cosmic” elements of some Marvel comic books (as well as the intellectual pontifications of series like Watchmen and Sandman), The Other transformed Peter into a God-like being. It came across as completely unnatural, and while I’m sure some part of me thought it was pretty cool that Spider-Man had all this power, I still couldn’t get over the fact that this was the character who has failed himself and the people he loves countless times. While there are people who really hate what Dan Slott has done with the mind-swap of Peter and Doc Ock, I can undoubtedly accept that Pete’s virtuous naiveté could end up harming him in a serious way – like losing control of his body to his arch nemesis. So, yeah, The Other just didn’t work for me. 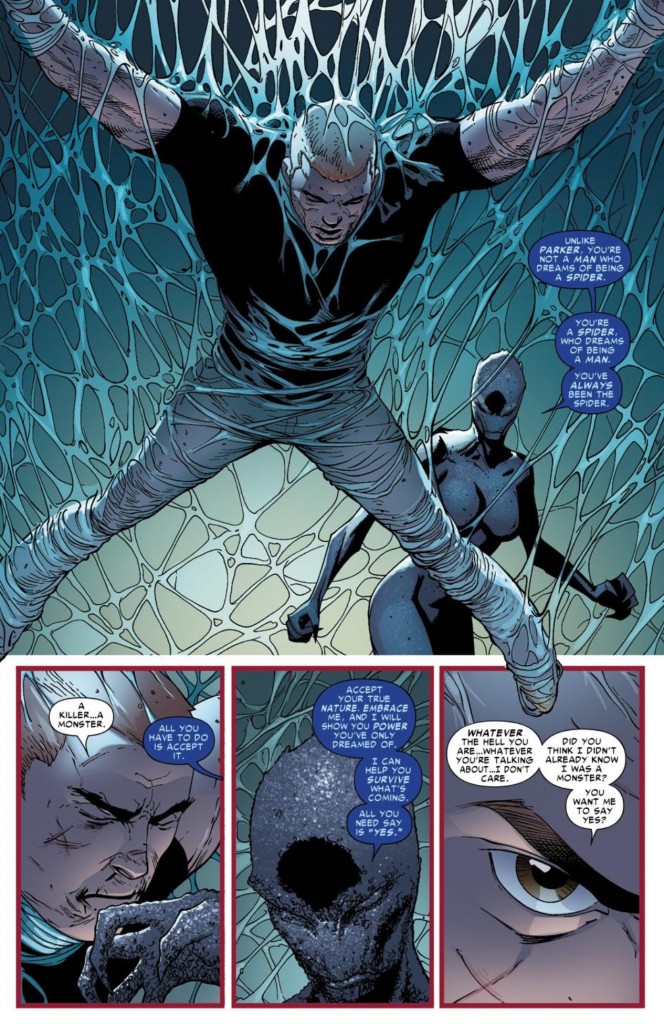 And yet I’m willing to be more open-minded about its potential virtues in the Scarlet Spider series. Keep in mind that my initial reservations about Scarlet Spider were entirely based on my PTSD from the “Clone Saga” of the 90s. Fortunately, Chris Yost has brushed past some of the absurd plot details that weighed down the Clone Saga and instead has create a wholly unique series about the abandoned clone of Peter Parker. Throughout the series first 14 issues – between Kaine’s characterization and the geographic setting in Houston – I’ve many times forgotten I’ve technically reading a “Spider” book. And that’s a good thing. The fact that Yost is pulling double duty with Scarlet and Avenging Spider-Man, and successfully distinguishing the “Superior” Spider-Man from his clone, is all the more impressive. 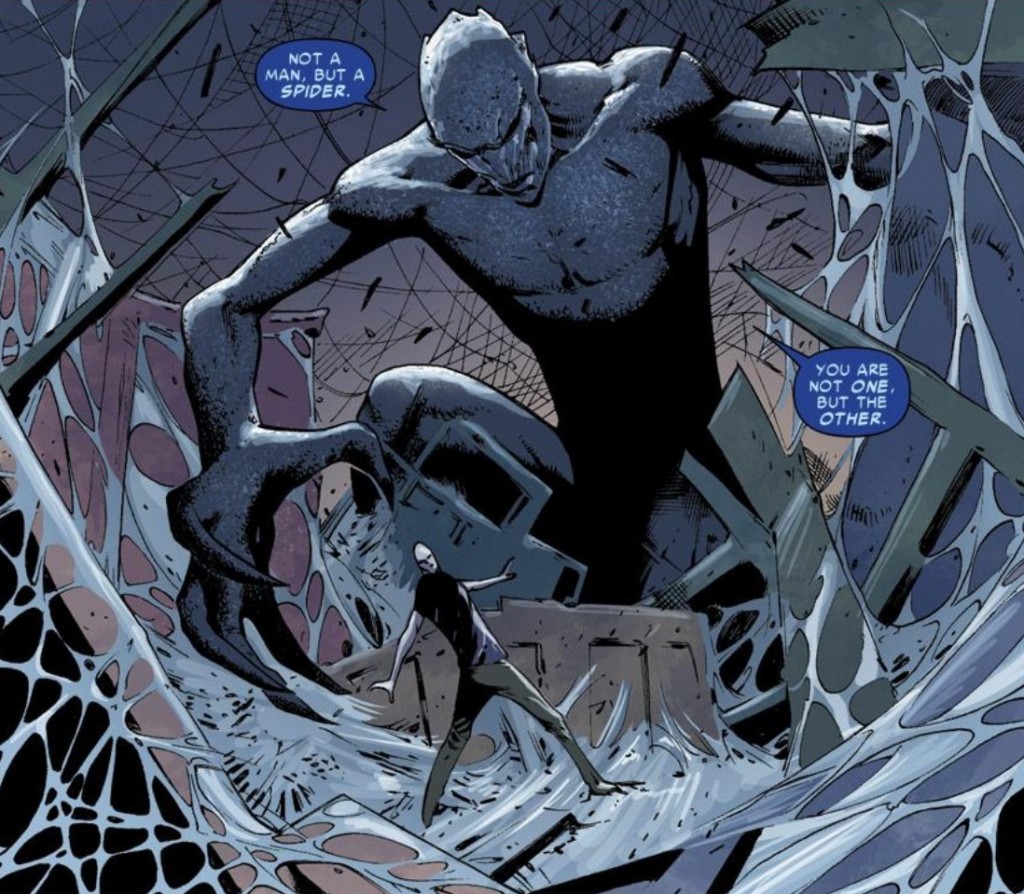 All the same, Yost is not afraid to reach back and bring in familiar Spider-Man elements to advance his own story. The Minimum Carnage arc is one example, and I’ll go on the record in saying it was my favorite Carnage story since he first debuted in the early 90s. If Yost wants to tackle the Other next, I trust him. As long as the premise is relegated strictly to the Scarlet Spider title, I think it could be an excellent tactic to further distinguish Kaine from the original Parker (a mind-swapped Peter at that). Kaine can have this mystical, almost other-worldly powers because there is nothing remotely “average Joe” about him like there was/is with Peter. He’s a genetic replication of my favorite superhero, but he’s otherwise a completely different individual with his own moral code and agenda. 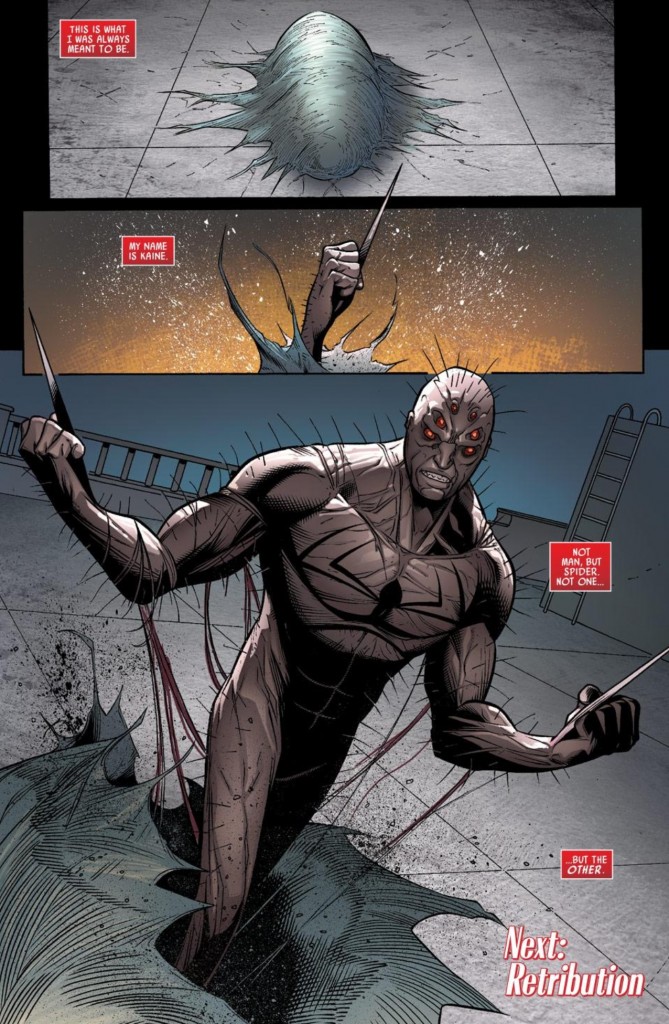 In the meantime, I’ll continue to look forward to checking out Scarlet Spider every month and urge other Webheads who may be hesitant to give it a read. There’s some really fun stuff going on in this title, with some new characters and some old/underused ones that I haven’t thought about in years. It’s an atypical superhero comic, so I can totally forgive it embracing the elements of an atypical Spider-Man story arc from the past.