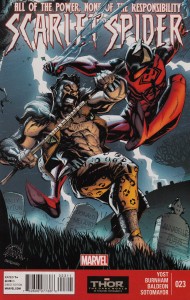 From its very first issue, Scarlet Spider has featured the tagline, “All of the Power, None of the Responsibility.” And yet, 23 issues in and only two installments away from the series finale in December, the “power/no responsibility” tagline feels like a gross over-simplification of Kaine’s journey. When he first started out in his own series, Kaine was an unwilling hero. He fought the label because he didn’t want to be burdened with the unyielding morality that has been best exhibited over the years by his “brother” Peter Parker.

So it’s only fitting that in Scarlet Spider #23, when Kaine finally embraces the idea of heroism – of doing the right thing despite his base instincts telling him otherwise – that he should end up suffering a fate that’s all too familiar to Spider-Man/Peter. While it’s not certain by issue’s end if the Ana Kravinoff blade to the midsection of Donald Meland was enough to kill him, we do learn that the innocent man’s life has been forever changed. And this burden will certainly be something Kaine carries with him for the rest of his life (and will probably factor into the character joining up with the New Warriors – a team of misfits and outcasts – when that series launches next year).

Perhaps no scene was more déjà vu worthy for Peter Parker fans as when Meland’s husband, Officer Wally Layton, bitterly tells a desperate Kaine that he’s “done enough,” as the Spider Clone attempts to save the man from bleeding out.

It’s entirely unfair for Layton to blame Kaine in this circumstance.  Kaine was just trying to take the high road in his battle with Kraven the Hunter, refusing to kill the villain despite his demands.

But such unfairness and unreasonableness is just part of the status quo for the Amazing Spider-Man. Was it fair of Gwen Stacy and others to blame Spidey for the death of Gwen’s father, Captain George Stacy? Was it fair for Spider-Man to endure the smear campaign launched by Daily Bugle publisher J. Jonah Jameson where he was blamed for the death of Norman Osborn/Green Goblin (when in fact, the Goblin impaled himself after murdering Peter’s girlfriend, Gwen)? Should Peter continue to carry the burden of those like Marla Jameson or Captain Jean DeWolff, who died due to uncontrollable or unforeseen circumstances, but still died on his watch all the same? 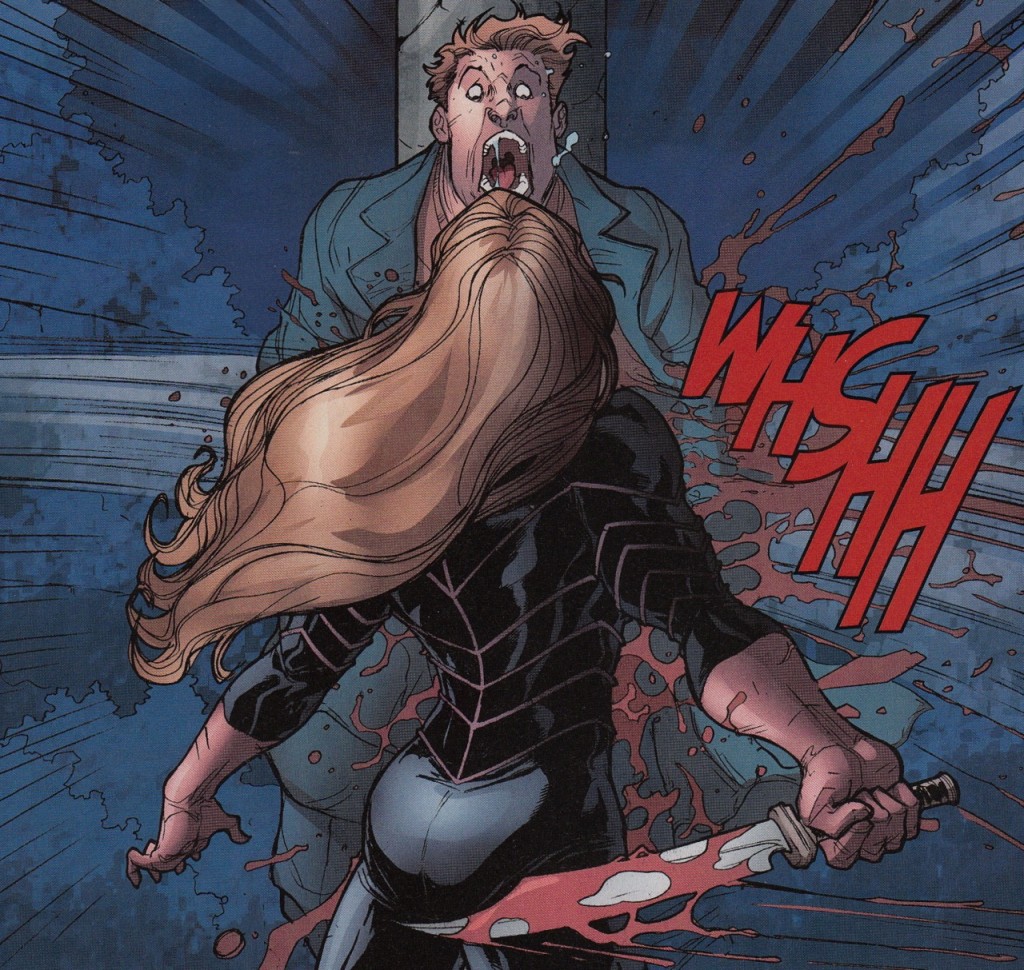 If solicitations for the last few issues of Scarlet Spider are to be trusted, Kaine is going to believe he “failed” during his test run of a hero, and yet his actions following the brutal injury to Meland demonstrate a level of heroism that is only rivaled by true comic book icons like Spider-Man. After a blow to the heart that promptly “kills” Kraven, Kaine resuscitates him and claims that there will be no more deaths on his hands. Kraven – showing that all these years later he’s still the master of mind games – of course casts doubt on Kaine’s claims by simply nodding his head towards the bleeding Meland. But like Spider-Man vs. the Green Goblin in ASM #122, Kaine does not actually kill his adversary. That’s tremendous character growth, even from just a few issues ago when Kaine was cutting deals with the Kingpin and showing no remorse during his battle with and alongside Wolverine.

It’s unfortunate that Marvel waited 23 issues before pulling the trigger on any kind of forward momentum with Kaine here. Similarly, the “Into the Grave” arc is the first instance of real character development with Scarlet Spider’s supporting cast (outside of Aracely) since the title’s opening few issues. I couldn’t help but wonder to myself how much more devastated I would have been by Meland’s potential death if the Scarlet Spider creative team had spent some time in the issues leading up to this arc fleshing him out and making him a compelling individual, and not just a red shirt for the Kravinoff family to take care of.  In ASM history, the deaths of Captain Stacy and Gwen were total gut-punches because those two characters were so well crafted that the reader started to think of them like real people. 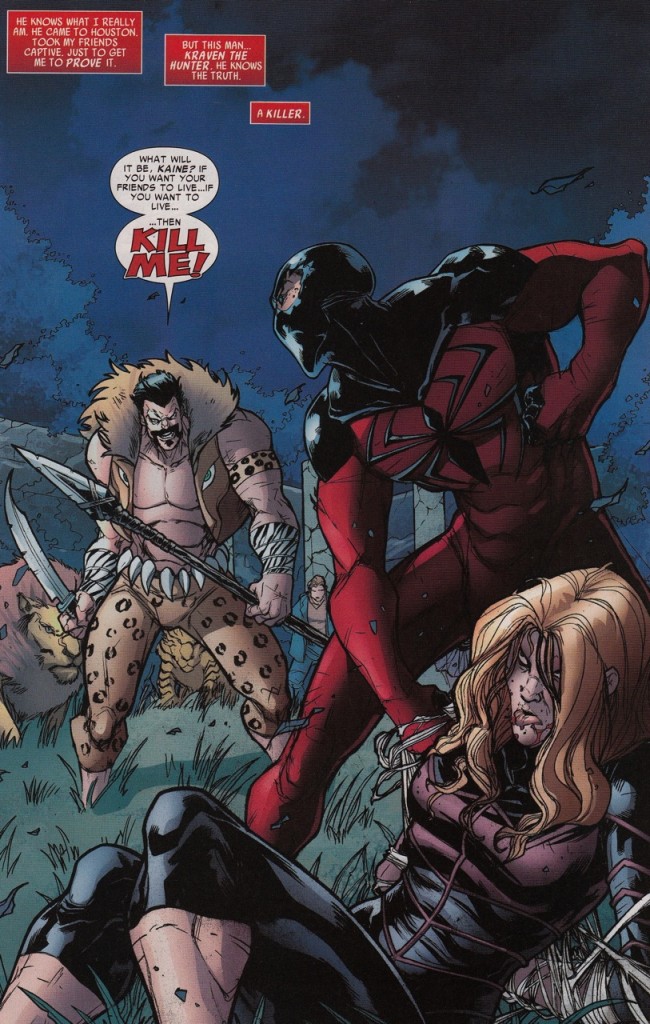 My disengagement with Meland’s (maybe) death speaks to some larger issues with the Scarlet Spider series. While I’ve been kinder to the title than many, I’m also not of the contingent who have thought it was the “best” Spider-family series over the past year. The main reason why I’ve been so thumbs-in-the-middle on this series is that nothing momentous ever really seems to happen in Scarlet Spider. I know I’ve been saying this a lot around these parts in reference to other comic book series, but I need to get the impression that whatever book I’m reading is going to be consequential in the long run. Scarlet Spider hints at big ideas, whether its introducing Kaine’s “other” powers or having him make a deal with the “devil” in Kingpin, but never really lets anything maturate before jumping to the next arc.

“Into the Grave” was probably my favorite Scarlet Spider arc since the title launched in 2011, which is why I’ve written a post about every issue in the storyline. But unless something extraordinary happens in the penultimate issue later this month, I’ll save my final thoughts on Kaine and his character going forward for the series finale in December, similar to the post-mortem I did with Venom a few weeks ago.