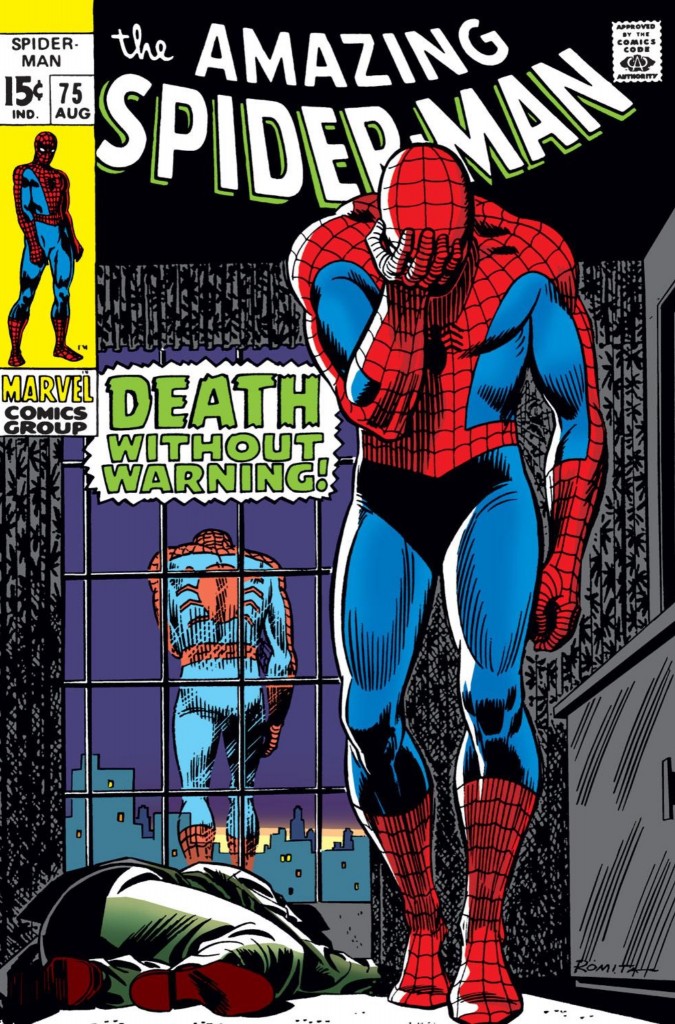 So after months and months of Spider-Man traversing the Multiverse, looking for secret scrolls and magic crystals, Webheads are set to get a steady dose of STREET LEVEL Spidey with the first issue of Gerry Conway’s “Spiral” miniseries this week. To say I’m excited to get a back to basics Spider-Man story that sees him taking on the likes of the Maggia and Tombstone rather than vampiric “Inheritors” and their blood rituals, is an understatement.

In fact, I’m so stoked for this departure (and the return of Conway to Amazing Spider-Man), that I thought we’d kick off another “theme month” (and then some) of posts, focusing on some of the best Spider-Man vs. the criminal underworld stories from throughout the character’s history. Over the next few weeks, I’m going to highlight Spider-Man stories that feature all of the major Marvel mob bosses (and maybe a few not so major ones) as part of my celebration of “Spiral.”

But before we get to the first installment of this feature, let me just post some links to some Spidey underworld stories that have already been featured on this site in some other capacity. Yes, kids … I’m planning on giving you all new, all original content as part of this theme month. No rehashing old posts for this blogger (besides, what’s the fun of that?).

OK, so don’t ask me about those stories for the next few weeks … got it? Good!

So in terms of stories I haven’t really dissected in the past, I thought I would kick things off with the first appearance of one of the key members of the Maggia crime family. You might best associate this guy with the wise-cracking, disembodied head that tormented poor Shocker throughout Nick Spencer and Steve Lieber’s Superior Foes of Spider-Man, but I assure you when he first appeared during the Stan Lee/John Romita Sr. run on Amazing Spider-Man, Silvio Manfredi, better known as Silvermane, was a full-bodied (but aging) mob boss. 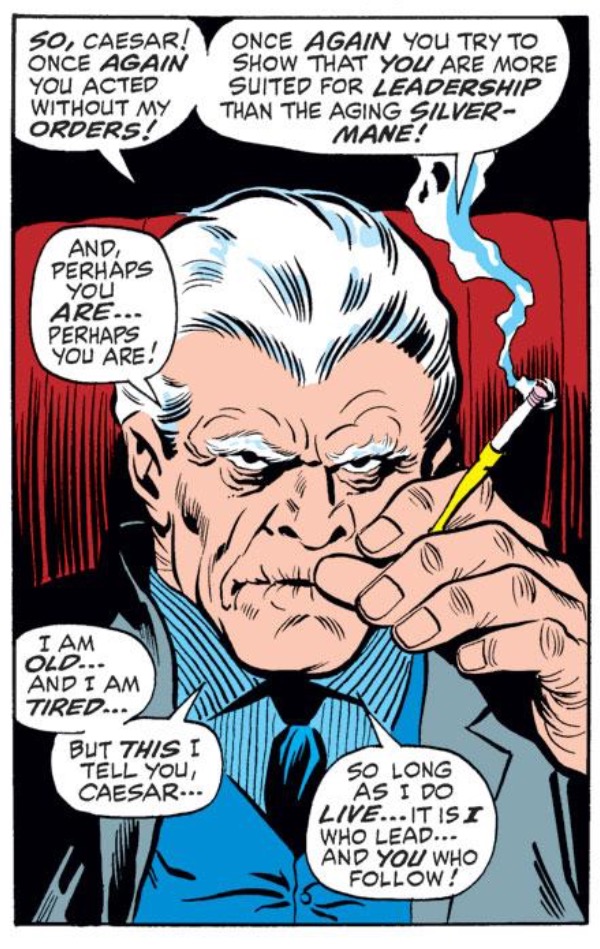 Silvermane and his top henchman, “Man Mountain” Marko, make their first appearance in ASM #73, which kicks off a three-issue storyline that encompasses the latter half of a long-running Lee/Romita arc that’s been dubbed “The Petrified Tablet Saga.” Basically, this arc deals with an ancient tablet/Macguffin that is exhibited at Empire State University before Wilson Fisk (aka, the Kingpin) attempts to hijack it. Police Captain George Stacy (Gwen’s father), takes possession of the tablet until the Shocker breaks into his home and steals it. From there, Manfredi and the Maggia track down the tablet and steal it for themselves. This game of ancient tablet round robin eventually ends with it in Manfredi’s hands, since he’s so desperate to acquire it because it allegedly contains some kind of secret formula that would make him younger and stronger.

As I was writing out that last paragraph, I realized that an ancient tablet that contains a formula for a mystical “Fountain of Youth” isn’t that far of a cry from “Spider-Verse’s” secret scrolls. So while I chew on that for a second, I’m going to attempt to ignore the similarities here in hopes of not coming across as hypocrite for deriding “Spider-Verse” for being silly and inane, while simultaneously praising these old school street level stories for being a breath of fresh air. 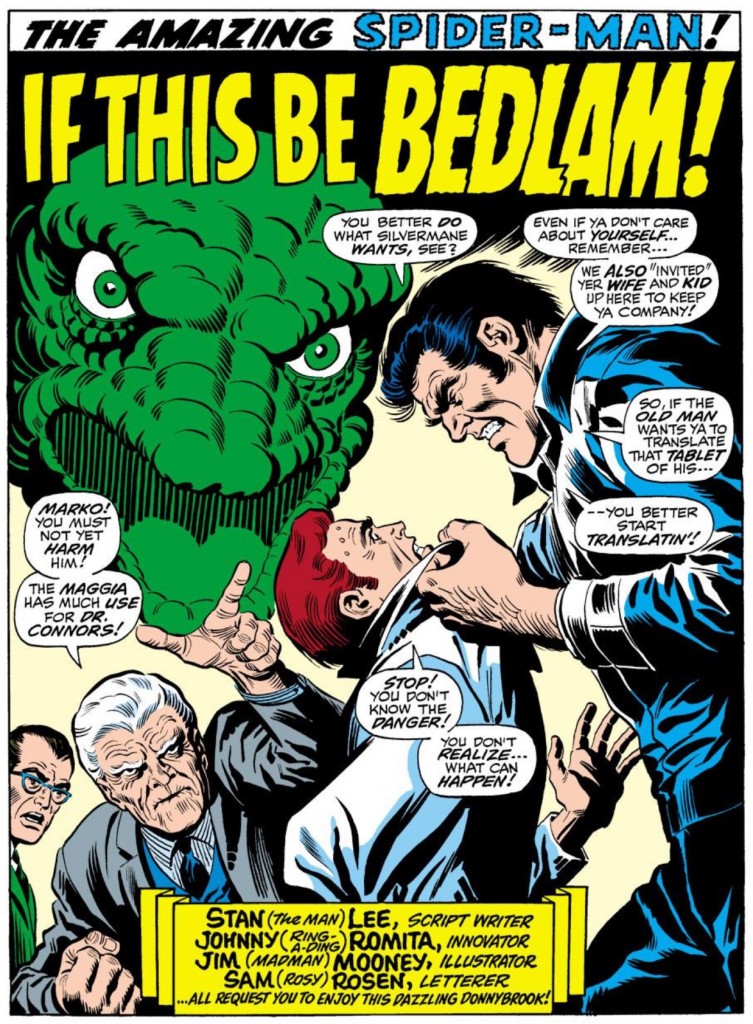 In all seriousness, what separates the “Petrified Tablet Saga” from the silliness of the secret scrolls and magic crystals, is the fact that at its core, Lee and Romita have created a very sound “Faustian/Monkey’s Paw” like story of someone seeking something that, on the surface, should be unattainable – i.e., his physical youth – and discovering that such things are unattainable for a good reason.

With Curt Connors help, Manfredi succeeds in developing a de-aging formula from the petrified tablet and upon ingesting it, immediately regains his vitality and strength from his earlier years. Unfortunately for Manfredi, once he starts his regression, there’s apparently no stopping it, and the character keeps getting younger and younger until he eventually disappears into thin air, leaving behind just a pile of clothes (and inspiring the cover image for ASM #75, one of my favorite Romita covers from the era). 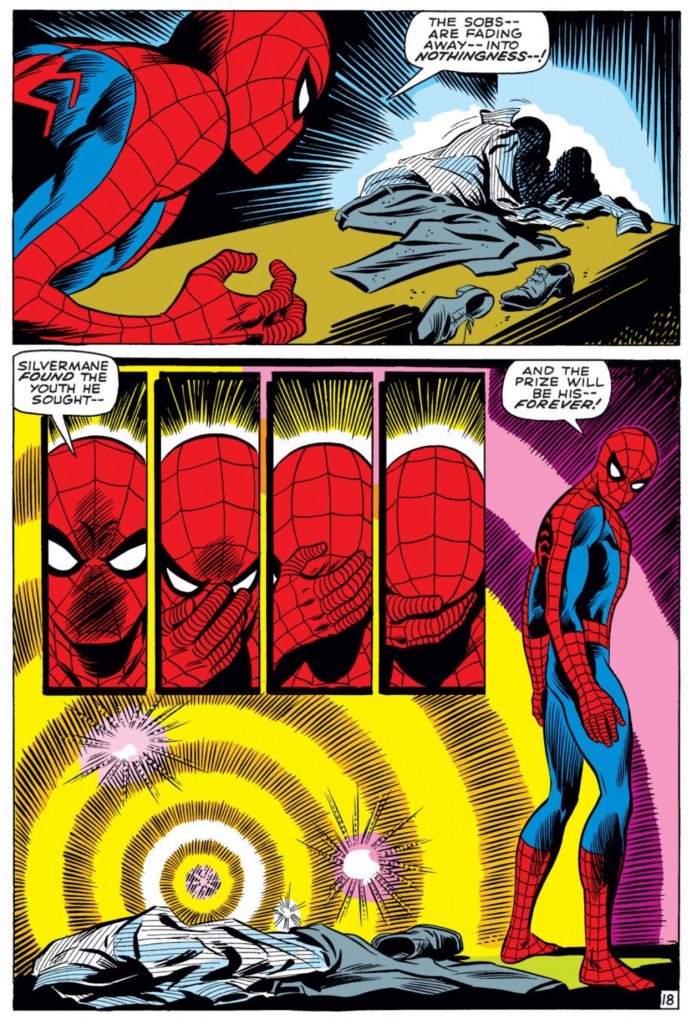 But beyond Silvermane getting what he wished for and then some, one of the interesting things about this storyline is its depiction of the Maggia hierarchy, especially as it pertains to the Manfredi branch of the family. Whereas the Maggia had existed in Marvel Comics for a few years priors to this arc, ASM #73-75 does a great job of breaking down the dynamics within the family – the chain of command and the level of respect Manfredi commands as the elder statesman of the family.

As someone who grew up on films like Goodfellas (and of course, the Godfather trilogy), and who was a huge fan of The Sopranos on HBO, there’s something familiar about Lee and Romita’s depiction of the Manfredi’s, that, as a result, makes it quite revolutionary when you consider this arc was originally created in 1969. The Godfather, by Mario Puzo, had only been published a few months earlier, and while I guess it’s totally possible that Lee and/or Romita read and digested that book prior to putting together the “Petrified Tablet Saga,” I’m going to go out on a limb and say that the overall timeline of all of these events is just way too condensed for Puzo to be cited as an actual influence for Lee/Romita at this point in time. That means Lee must have had some insights to the structure of a traditional Mafia family when he first created the Maggia, and then that structure was likely built upon and was further influenced as more underworld stories started to populate pop culture in the late 1960s/early 1970s. 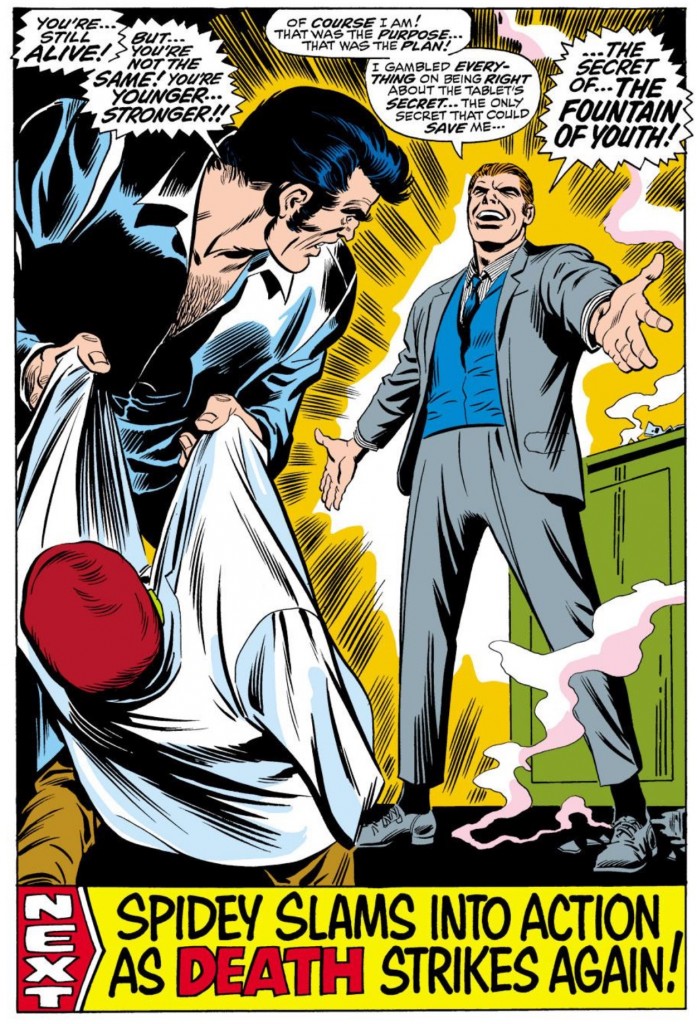 Of course, there are many elements to this story that reflect typical, over-the-top superhero comic book theatrics, and are not even remotely realistic in terms of what actually went on in the American Mafia during this era (I don’t ever recall a story about Don Corleone trying to regain his youth, nor did he make enemies with any masked vigilantes like Spider-Man).

Still, the Maggia, as presented in ASM #73-75, reads as the closest Marvel had come to depicting a comic book analogue of the Italian Mafia (that we know and love from pop culture) at this point in industry history. In the 60s, Kingpin, Crime-Master, and some of the other bosses that were created/depicted read more as gangsters and thugs than actual criminal “families” that have relationships and rapports with each other than extend beyond a bank robbery or some other kind of heist.

Silvermane would naturally make some future appearances in the Marvel Universe before having his head disembodied – including one very ridiculous arc that I touch upon in a Spider-Man/Black Cat post where he’s been reanimated as a half man/half cyborg, but I truly respect the ultimately understated nature of the “Petrified Tablet Saga” and its potential influence on future Spider-Man underworld stories. Reading it again has emboldened me even more about the fact that this is going to be a fun series of posts for me to write, and hopefully I can keep you all guessing as to where I might be going next.