Dennis Hopeless’s take on Jessica Drew, Spider-Woman, continues to be the series I believe I have no business liking as much as I do.

As I mentioned in my write-up on last month’s Spider-Woman #1, I’ve never been much of a fan of Jessica as a character and always felt her connection to the world of Spider-Man was in name only (you see, because they both have “Spider” in their titles). Hopeless’s first issue did an excellent job of introducing readers to what’s going on in the larger “Spider-Verse” arc, but in terms of re-introducing the central character of the series, I thought it failed mightily, operating on way too many assumptions of what its readership might already know about Drew.

And yet there was a quirky and witty way about Hopeless’s script that drew me in regardless of its pronounced flaws – a sensibility that continues to be on display in last week’s Spider-Woman #2. This has been such a strange series thus far – it’s funny in unexpected ways and provides little to any insight as to why Jessica is worthy of her very own solo series at this stage of her comic book career. And yet I keep reading. I react to the news of the character getting a new costume (thumbs up from me – like Spider-editor Nick Lowe, I think the days of skintight latex are a thing of the past). And I find myself willing to keep up with this series once we move past “Spider-Verse.”

In terms of my specific thoughts of Spider-Woman #2, I certainly appreciated the fact that this comic functioned as less of a spotlight on Silk than the previous issue, while also introducing the reader to the Inheritor’s strange residence, Loom World. One would think that Drew would stick out like a sore thumb trying to conduct some reconnaissance in her red-and-yellow Spider-Woman attire, but as plot-serving fate would have it, Loom World features another female who looks and dresses just like Spider-Woman. And not only does this woman look exactly like Jessica, but she happens to be the love interest of the Inheritor Morlun.

Hey, if a story of mistaken identity such as this could work for Shakespeare (and like 900 sitcoms since the 1950s), who am I to say it has no business showing up in a comic book I’m reading? 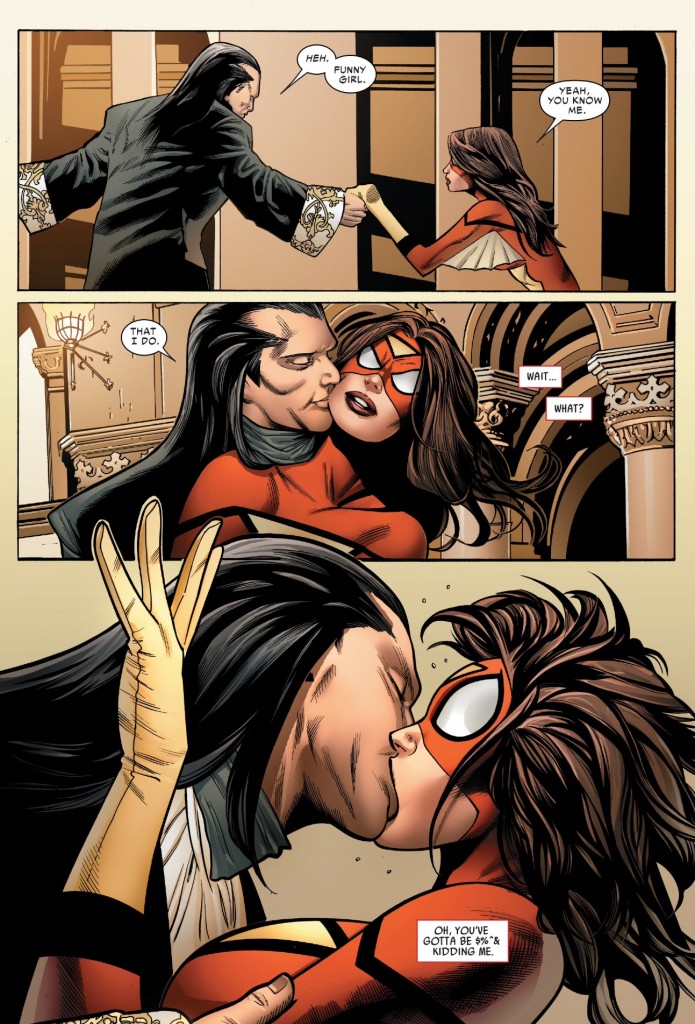 So that brief little synopsis covers what makes this comic book so much fun to read. There’s just a rhythm and a patter to how Hopeless scripts this book, very similar to what I said about Peter David’s work on Spider-Man 2099 a few months back. Jessica’s monologue-ing is especially funny as she recaps such things as why she and Spider-Man aren’t best of friends (despite both being Spiders) to just her overall impression of Loom World and her nasty doppelganger.

I realize that some might find the book’s breezy tone to be a bit off-putting, especially in light of the apocalyptical stakes that come with “Spider-Verse,” but like a Taylor Swift pop song, I can’t help but bop my ahead along and smile. In other words, as of right now, Spider-Woman is the bubblegum of the “Spider-Verse” books.

Even Silk is a lot of fun to read about in her brief but very important role in Spider-Woman #2. The character is becoming more sympathetic by the day, which, in turn, makes her more relateable for average readers. The character needs to show some flaws, whether they be physical or emotional, and I think Hopeless is really tapping into the latter and how her years of seclusion have failed to prepare her for the world of “Spider-Verse.” As such, I found myself quietly cheering when she stumbled upon the lost part of the Multiverse that even the Inheritors cannot access. 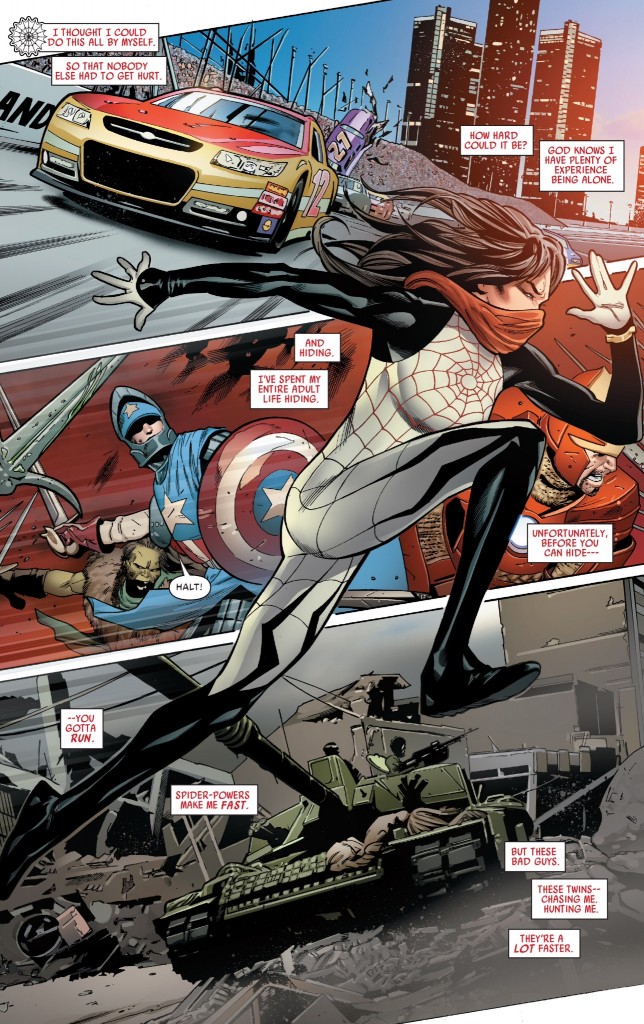 Still, even when looking at this comic through candy-coated glasses, there are a couple of things about Jessica’s characterization that need some major revamping. Having a heroine who only seems to be able to succeed through the use of her pheromones which make her oh so desirable to the opposite sex seems like something that comic book creators just can’t get away with now that we’re in the 21st century. I’m certain that Hopeless doesn’t mean this to be demeaning to the character, but objectification is objectification no matter how you try and slice it or dice it. And when you combine Greg Land’s curve-accentuating, lip-enhancing artwork, and you have a comic on your hands that needs to be a bit more sensitive to the ever-diversifying comic book reading audience.