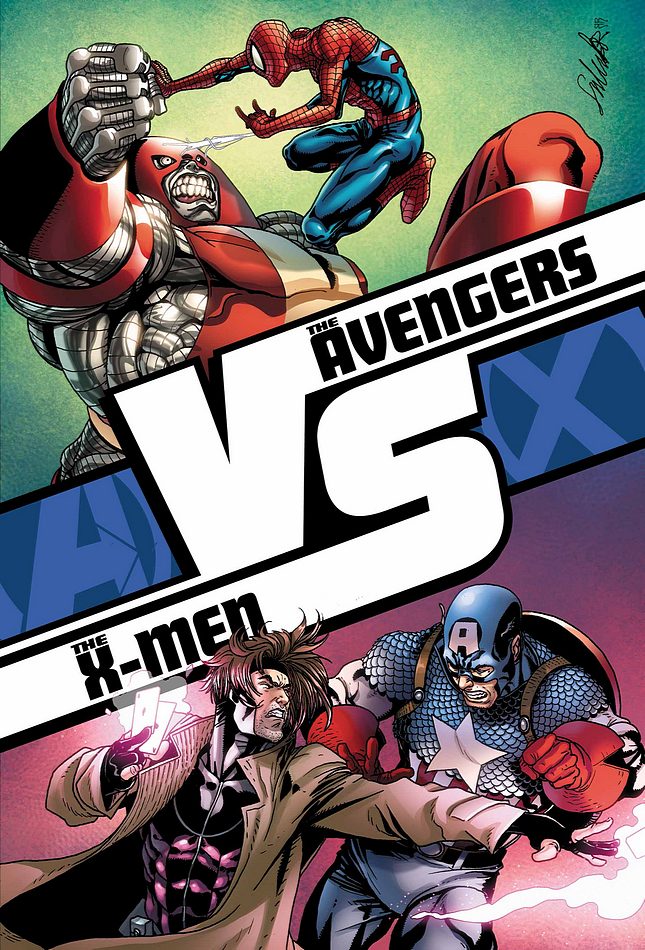 If you want to adequately blow the mind of an 18-year-old (or depending on the age of those of you out there reading this, want to have your minds collectively blown), send them a copy of Jorge Luis Borges’ Ficciones. While the collection is filled with a number of intellectual short stories dealing with such humdrum themes as nihilism, existentialism and faith, the one story that I think is truly relevant to the subject of this post – AvX VS #2 – is, “Pierre Menard Author of the Quixote.”

Pierre Menard is a darkly comic and satirical commentary on literary criticism. In it, the narrator, telling the story in the voice of an essay, is praising the work of fictitious author Pierre Menard who has just written a line-for-line exact recreation of Cervantes’ great work Don Quixote. What the story is REALLY about is such esoteric ideas as the nature of authorship, context and interpretation. In other words, does re-writing a novel, word-for-word, hundreds of years after it was originally published give the work new meaning based on certain contextual changes. Perhaps a less brainy analogy would be Gus Van Sant’s shot-for-shot remake of Alfred Hitchcock’s Psycho in 1998.

Where am I going with this all this rambling besides the very obvious attempt to pander to some of my old college friends and mentors who occasionally check into this blog (at least that’s what they tell me they do)? AvX VS #2 is a Marvel mini-series currently being produced as an addendum to the big summer blockbuster mini-series Avengers vs X-Men. The premise of VS is because the main AvX story is filled with such important story-telling devices as exposition and plot, VS is where the characters just FIGHT and SMASH each other. Putting aside the fact that the main AvX story has thus far just been five issues of FIGHTING and SMASHING, Marvel makes no apologies that VS is a mini to pick up if you just want some unbridled joyous brain draining. And in the mini’s second issue they revisit what many Spidey fans consider to be one of Amazing Spider-Man’s greatest story arcs of all-time, “Nothing Can Stop the Juggernaut” (found in ASM #229-#230).

While VS #2 is not quite a panel-for-panel re-telling of this great story – where Spider-Man is on his own in stopping the Juggernaut, who brushes aside all of Spidey’s physical attacks, until the Web Slinger ultimately uses his brain and ingenuity to subdue a character who’s notorious for being an unstoppable force – the new comic quotes quite heavily from its predecessor and in many ways feels like the comic book industry’s equivalent of what Pierre Menard did with Cervantes.

The fact that Marvel chose its “we don’t need no stinkin plot” mini-series to reprise “Nothing Can Stop the Juggernaut” is very telling about the state of comic books today. When Roger Stern’s two-parter originally appeared in the early 1980s, there was something extraordinarily edgy about taking a villain from another comic book’s world and having that character interact with Spider-Man. Readers had seen Spider-Man tangle and succeed against villains from his own universe – Green Goblin, Doctor Octopus, Sandman, Mysterio, etc. – but how would he fare against someone that is typically reserved for the X-Men? Not only was Juggernaut not a traditional Spider-Man villain, but Spidey didn’t even have the assistance of a teammate like in Marvel Team-Up. He had to do this all on his own.

And yet, beyond the curiosity element involved in a Spider-Man vs. Juggernaut match-up, you had Stern’s fantastic story, which in a previous post I equated to being “the unstoppable force” vs. “the unstoppable spirit.” By definition, the Juggernaut can not be physically stopped, while in the case of Spider-Man, his “must succeed at all costs” attitude has helped him overcome insurmountable odds throughout his 50-year history. Stern married these platitudes well and in the end you get a memorable story that is still revered to this day.

If I could put my grumpy old man hat on for a second, in today’s comic book universe, crossovers and mini-series events dominate the newsstand. In the past year, Spider-Man has been an active member of the Avengers and the Fantastic Four, in addition to his regular duties as your Friendly Neighborhood Spider-Man. The fact that Marvel is attempting to cash-in on a series that features the Avengers and the X-Men interacting and fighting each other is really very curious. There’s nothing particularly special about these groups interacting with each other. In the case of characters like Wolverine and Storm, they are technically members of both groups (or WERE members. I really can’t keep up with the membership cards when it comes to these two groups). These series – both AvX and VS – are what they are: summertime filler and attempts to sell as many comic books as possible by cramming every popular character in one (or two) books.

As such, it’s no surprise that in the 2012 re-telling of Spider-Man vs. Juggernaut (and yes, I realized that it’s X-Men’s Colousses who now apparently has the Juggernaut’s powers and suit) gets boiled down to punch, kick, kick, boom, smash, good-bye. If you want a highly articulated version of Spider-Man, go read what Dan Slott is doing on ASM, or better yet, go into your short/long box of comics and dig out ASM #229 and #230 and read Stern’s original work. But today’s version of the story doesn’t require much articulation because ZOMG the AVENGERS AND THE X-MEN ARE FIGHTING EACH OTHER.

As you might gather, I honestly felt VS #2 insulted the legacy of ASM #229 and #230. I picked it up in hopes that maybe after nearly 30 years, despite the a number of guarantees that this comic book would introduce any new, groundbreaking material, that there would be something new to say about the story.While I’m sure someone out there inevitably found the comic to be a fun, fast-paced re-telling of Spider-Man vs. Juggernaut, unlike the essayist discussing Menard’s work in Quixote, I just can’t find the value this story brings to the AvX or Marvel universe.