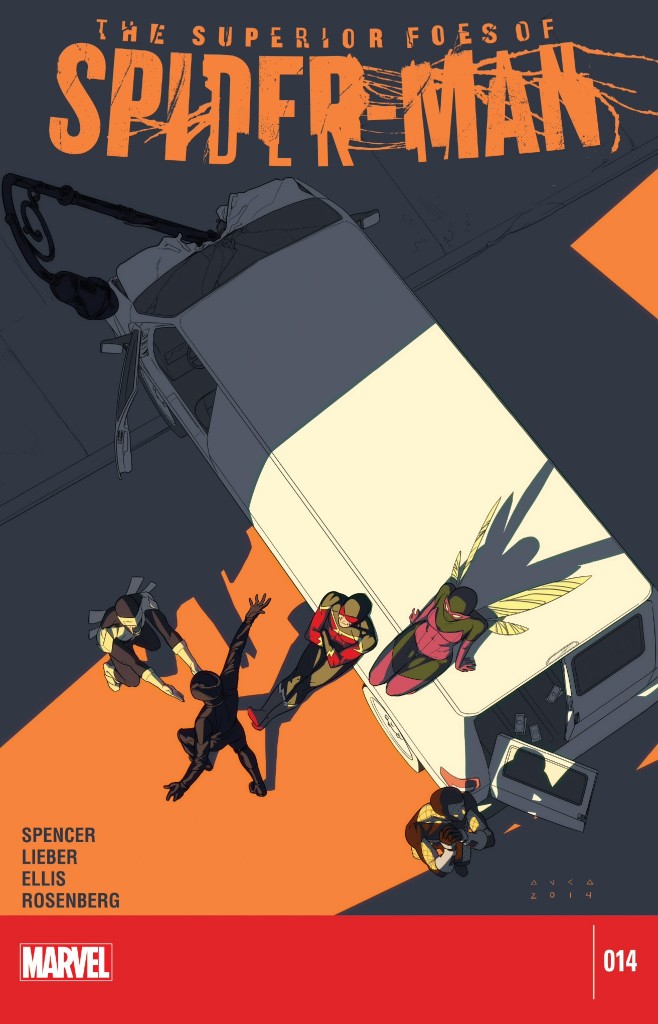 I haven’t too enthusiastic about some of the past issues of Superior Foes of Spider-Man that choose to focus almost exclusively on one character (not named Boomerang), but I felt like Nick Spencer and Steve Lieber really worked it out with the Overdrive-centric Superior Foes #14.

This is equally impressive because of all of book’s core characters, Overdrive has been the least evolved and has felt more like a potential redshirt in the series rather than a character I should care about. That’s not all on Spencer and Lieber, as a lot of it had to do with the fact that the book is playing around with three more “classic” (if you can say that about any of these guys) characters in Boomerang, Shocker and Speed Demon, and the Beetle is interesting for being the only female in the book (despite the fact that I found her origin issue a little pedestrian and predictable). 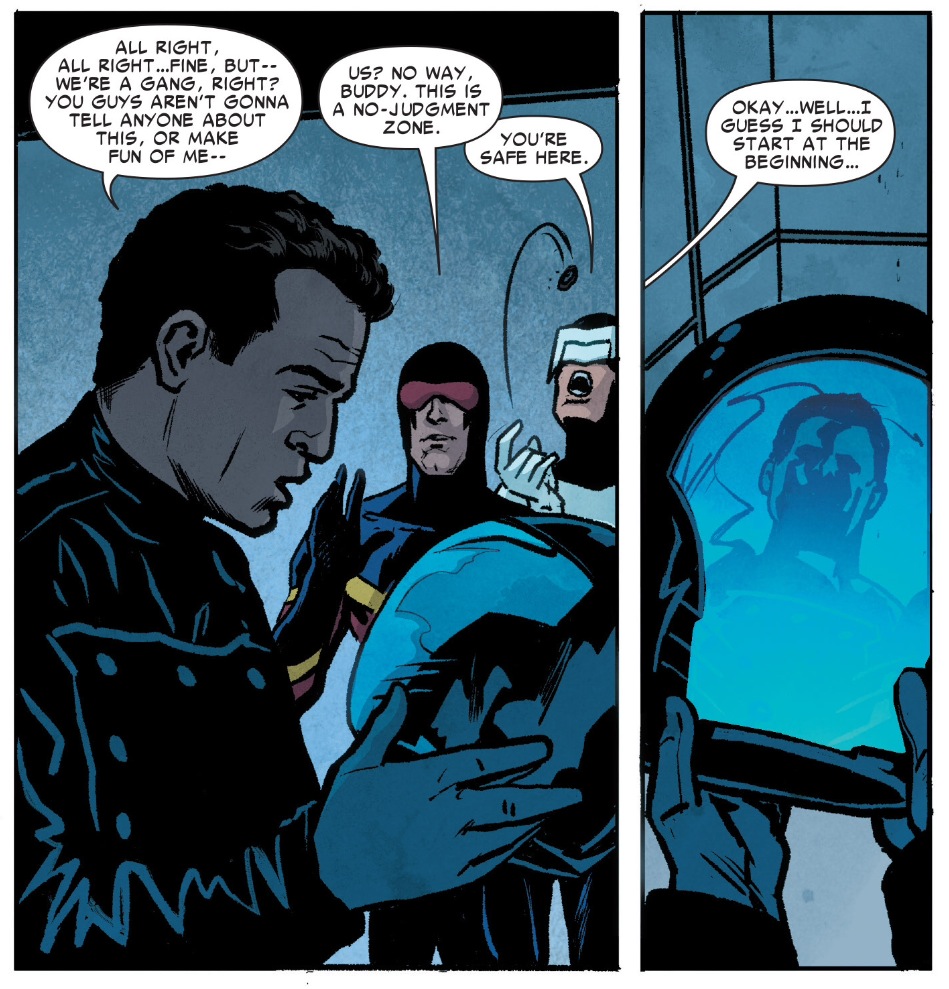 But Spencer/Lieber score with this comic, primarily because of how they transition into Overdrive’s origin story. We already learned that the group had made it to the “safe house” at the end of last issue, and since the crew needs to “chill out” for a little bit after screwing over the Chameleon and the Owl in succession, it feels absolutely natural for the group to sit back and share some stories around a table, with this particular tale focusing on Overdrive.

One of my biggest complaints about the Beetle issue a few months back, was how it seemingly disrupted the flow of the book. We got a huge reveal that Tombstone was Beetle’s dad to end one issue, but there really wasn’t any context to how or why this origin was taking place beyond the fact that the Tombstone surprise obviously needed some explanation. In the case of Overdrive, Superior Foes #14 depicts his story as being part of the larger caper arc that we’ve been reading about for the past year and change. Spencer/Lieber also manage to stuff it with enough action and laughs so at the very least, they can feign the idea that the larger narrative is propelling forward.

As for Overdrive’s actual origin story and its execution, Spencer and artist Rich Ellis demonstrate once again that Superior Foes is at its very best when it’s mocking old conventions and tropes in the comic book industry. Overdrive’s origin is just a story about a kid who looked around at other superpowered individuals in the Marvel Universe and realized that one of the most effective ways to become an Avenger is to actually start out as a villain and then magically “reform” yourself. He points to the cases of Scarlet Witch, Hawkeye, Quicksilver and Black Widow as examples of the best of the bad guys turned good. 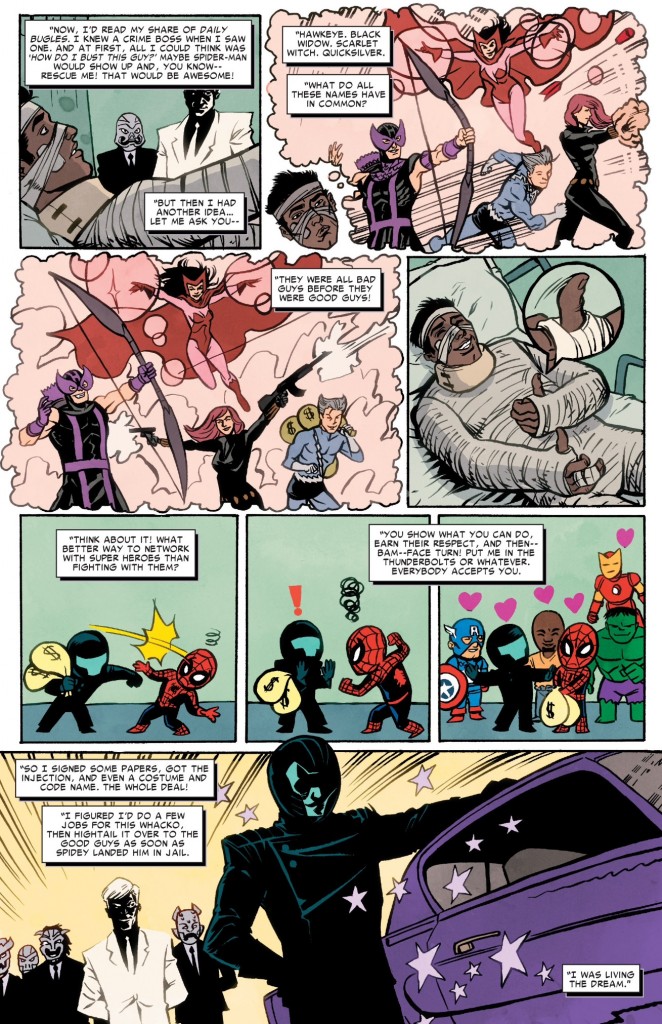 And considering how all four of these characters are either currently involved or will soon be a part of the Marvel Cinematic Universe (indicating true mainstream acceptance), Overdrive might actually be on to something here. Or maybe the creators are just mocking how “forgiving” the leadership of the Avengers has been over the years. Either way, Overdrive’s strategy is sound, despite the fact that it earns him scorn from his Sinister Six teammates.

Still, a person can’t be a superhero or villain without some powers, and after some very funny scenes depicting Overdrive exposing himself to gamma radiation and other methods of gaining powers, we discover that his ability to trick out vehicles and drive very … ugh … well, I guess … comes from some nanites that were installed in his blood stream by Mister Negative.

The only catch is Overdrive is so pathetic that when someone from Negative’s camp comes looking to collect for services rendered, he’s unable to pay, inspiring a “war” of sorts between Overdrive/Negative. A getaway scene involving Overdrive and Beetle then connects very nicely into the reveal we got last issue that something physical/sexual had happened between the two teammates at some point in time. Again, that’s just a great way to transition from issue to issue in order to keep the larger flow of the story moving forward. It also helps that it provides Spencer and Ellis ample opportunity to work in some hilarious jokes about Overdrive’s “performance issues.” 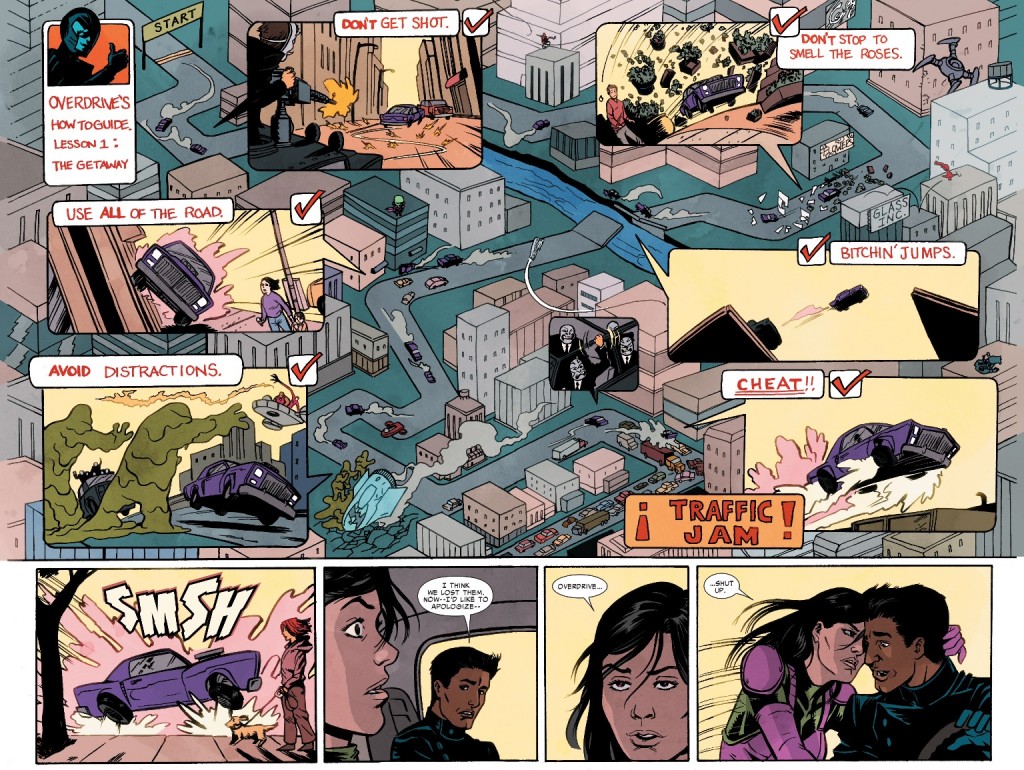 To tie everything together – all of those “loose ends” Boomerang refers to at the beginning – Superior Foes #14 ends by advancing the Shocker vs. the group storyline that has been developing ever since Boomerang locked him a car trunk and left him for dead. In addition to having Shocker attack the group with his vibro-blasters, he also declares himself the new leader of the Sinister Six, which builds off the last few issues that have shown the character becoming more emboldened thanks to some verbal takedowns from the disembodied head of Silvermane (a sentence I still will never grow tired of writing). 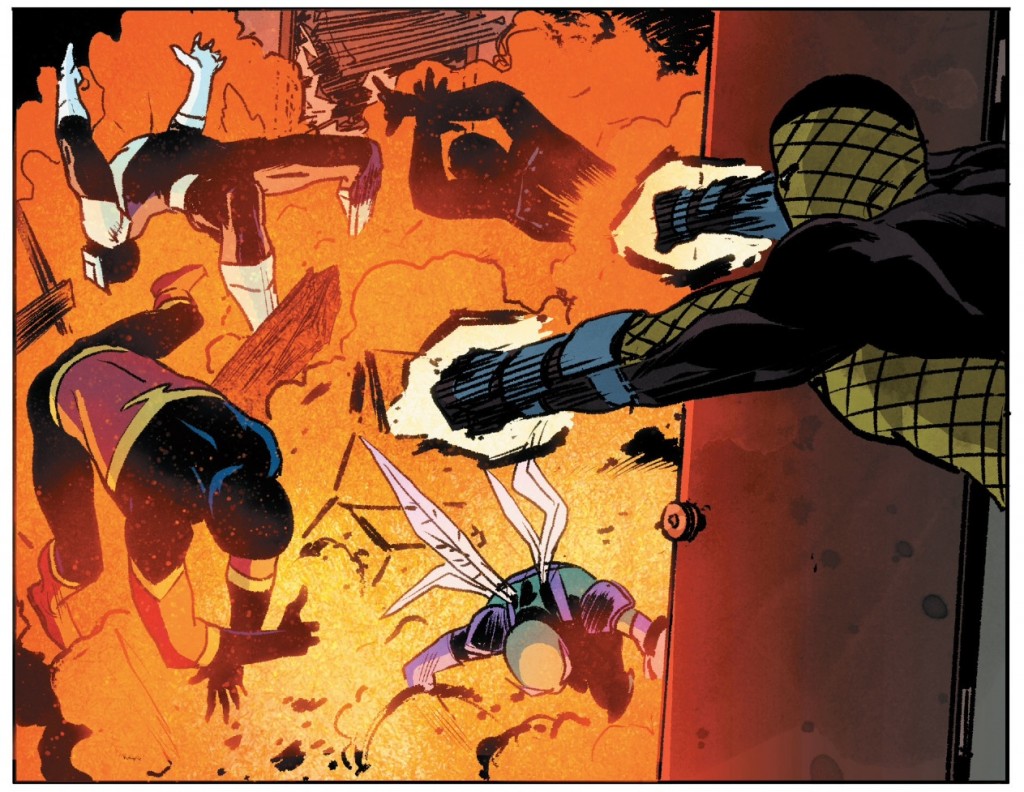 As I alluded to earlier, standalone issues sometimes can be the bane of existence for even a series as good as Superior Foes because they can come across as being too disconnected and thereby “non-essential.” But Superior Foes #14 is an expert example of how a story can be both independent and very much connected to a larger narrative, providing the best of both worlds for the reader.