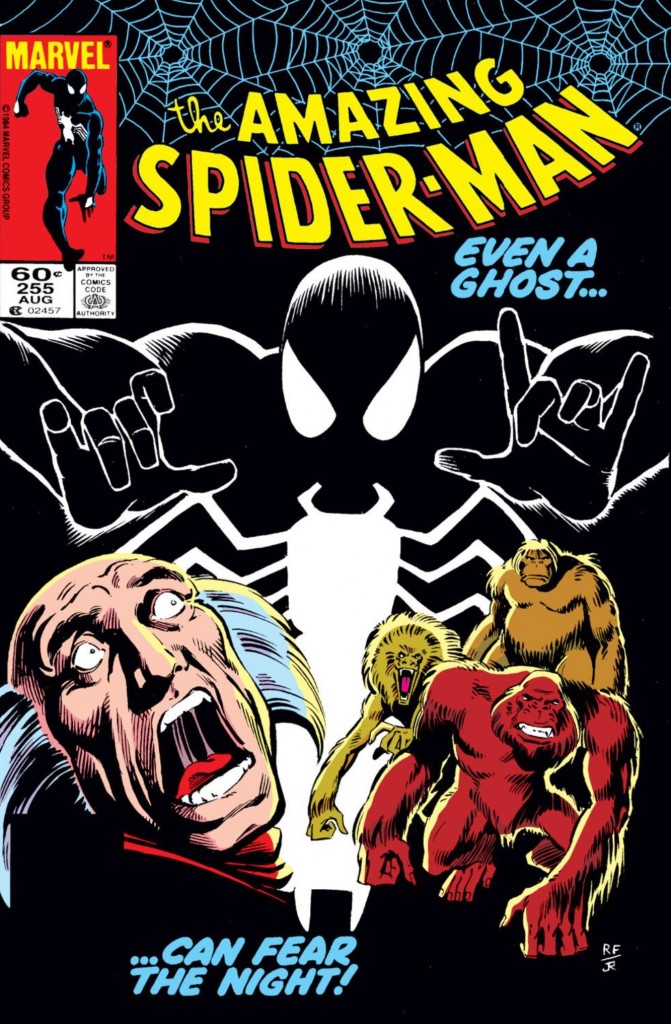 I’ve already talked at great length about how Amazing Spider-Man’s “Alien Costume Saga” has an almost “origin story” vibe to it, but I haven’t spent much time examining another thematic element that is on display in this run of issues.

While it would be a few years before various creators would explore how the alien symbiote had the power/capabilities of clouding the mind of the person it possessed (which gave us a wonderful scene of emo-Peter Parker disco dancing in Sam Raimi’s Spider-Man 3), this mid-80s issues make no bones about the fact that Peter’s life has become quite dark and dreary ever since he acquired this strange costume over on Battleworld (*don’t forget to read Secret Wars if you haven’t yet quote Spidey editor Danny Fingeroth).

With that in mind, in ASM #255, Tom DeFalco and Ron Frenz give us a Peter/Spider-Man whose life is quietly in disarray once you do the math and realize just how far the character has fallen over the span of a few issues. 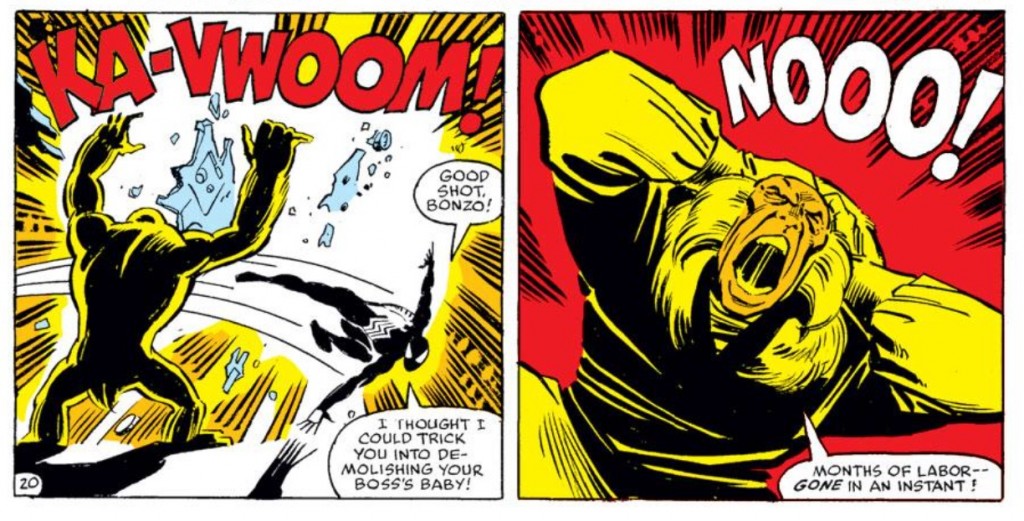 Spidey’s deadliest new villain the Hobgoblin is still at large and his whereabouts (and identity) unknown; Peter’s Aunt May is no longer on speaking terms with him after he dropped out of school, and now even May’s friendly boyfriend Nathan is giving Pete the cold-shoulder; his romance with Black Cat has taken a puzzling twist ever since he returned from Secret Wars; and he’s getting a tremendous amount of pressure from new Daily Bugle editor Joe “Robbie” Robertson about the quality of the photos he’s producing. The last time Peter’s social, personal and superhero life were this compromised he was just a teenager reeling from his acquisition of some unexpected superpowers and the death of his beloved Uncle Ben.

And while it might all be coincidental, the common denominator in all this is that Peter became most burdened once he showed up in New York City with this new black costume. In ASM #255, we see that the properties and characteristics of this new costume continue to confound Peter and that he needs to bring it in to Reed Richards and the Fantastic Four, but he is apparently procrastinating to his own peril. In one sequence, we see the costume slithering its way towards Peter while he’s sleeping and the next time he appears in the comic, he apparently slept the entire day away (though we’re about to learn more about what actually happened in a few issues time). 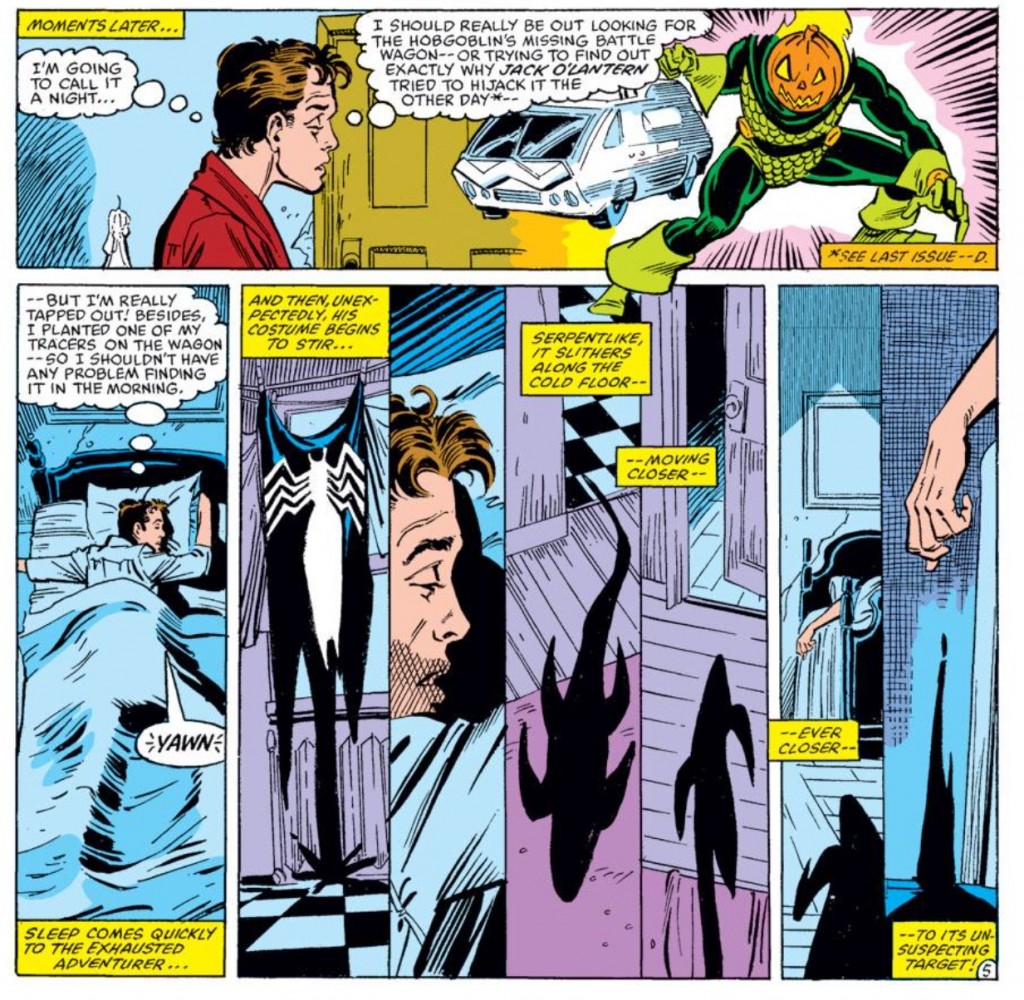 Playing off the theme of Peter’s descent, DeFalco and Frenz open up ASM #255 with a cute bit of misdirection. We get a glimpse of the backside of a shadowy figure wearing an all black costume, swinging in the air towards a ritzy looking building.

At first glance, it’s clearly a Spider-Man shot – this is an Amazing Spider-Man comic book after all, so who else would it be. But after reading the text bubbles, the reader realizes that there’s something terribly wrong with this picture. The shadowy figure is talking about becoming richer than he possibly could imagine. He enters the building and starts casing the joint. There’s no way this is Spider-Man. 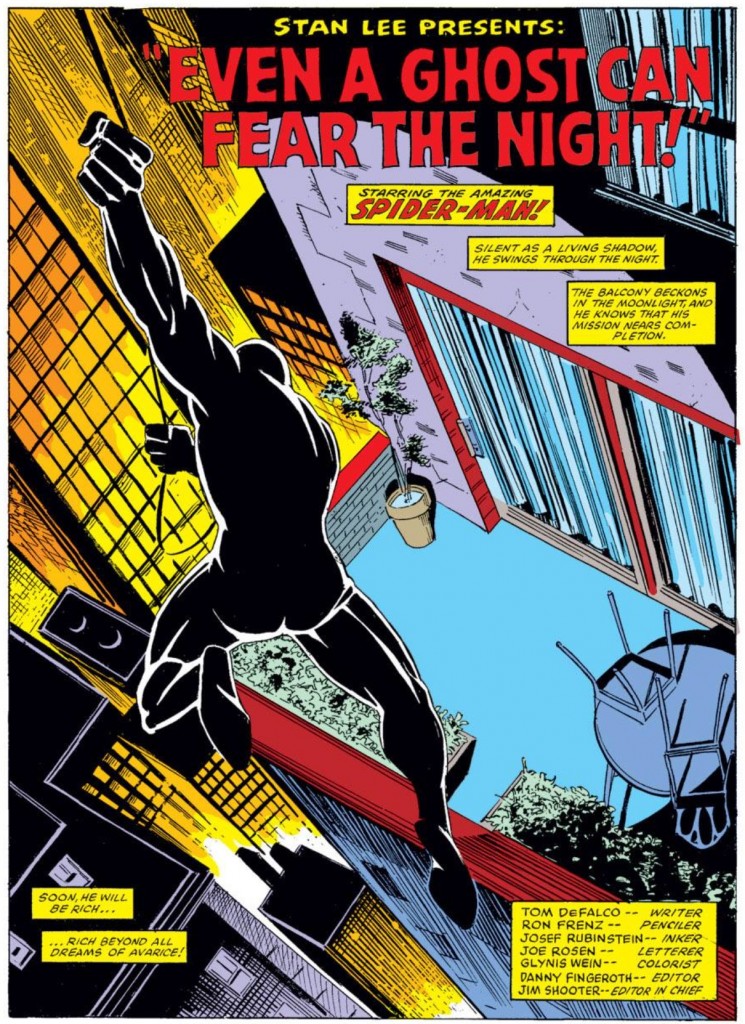 The figure is revealed as the Black Fox, the first in a line of new characters introduced by DeFalco and Frenz after apparently sifting through a deck of animal flash cards and coming up with their names (Black Fox, Puma, Silver Sable …). No, I’m not making up this story.

Anyway, once we move past the misdirection of the Black Fox’s introduction, DeFalco and Frenz deliver a story where even after Spider-Man succeeds in “saving the day,” he fails in the long-term. The main big bads in this story are the comical Red Ghost and his Super-Apes – foes that were once laughably apprehended by Spider-Man via the expert placement of fruit pies (as seen in Dan Slott’s Spider-Man/Human Torch miniseries).

After Red Ghost blackmails Black Fox into working for him in order to steal a macguffin-ish device the “cosmicizer,” Spider-Man arrives on the scene to save this new stranger and toss some smelly monkey jokes towards Ghost and his assistants. Black Fox uses this moment as an opportunity to take off with a bag of jewels. That means the Red Ghost might be taken care of, but now Spidey has another potential adversary and headache at large in the Black Fox. 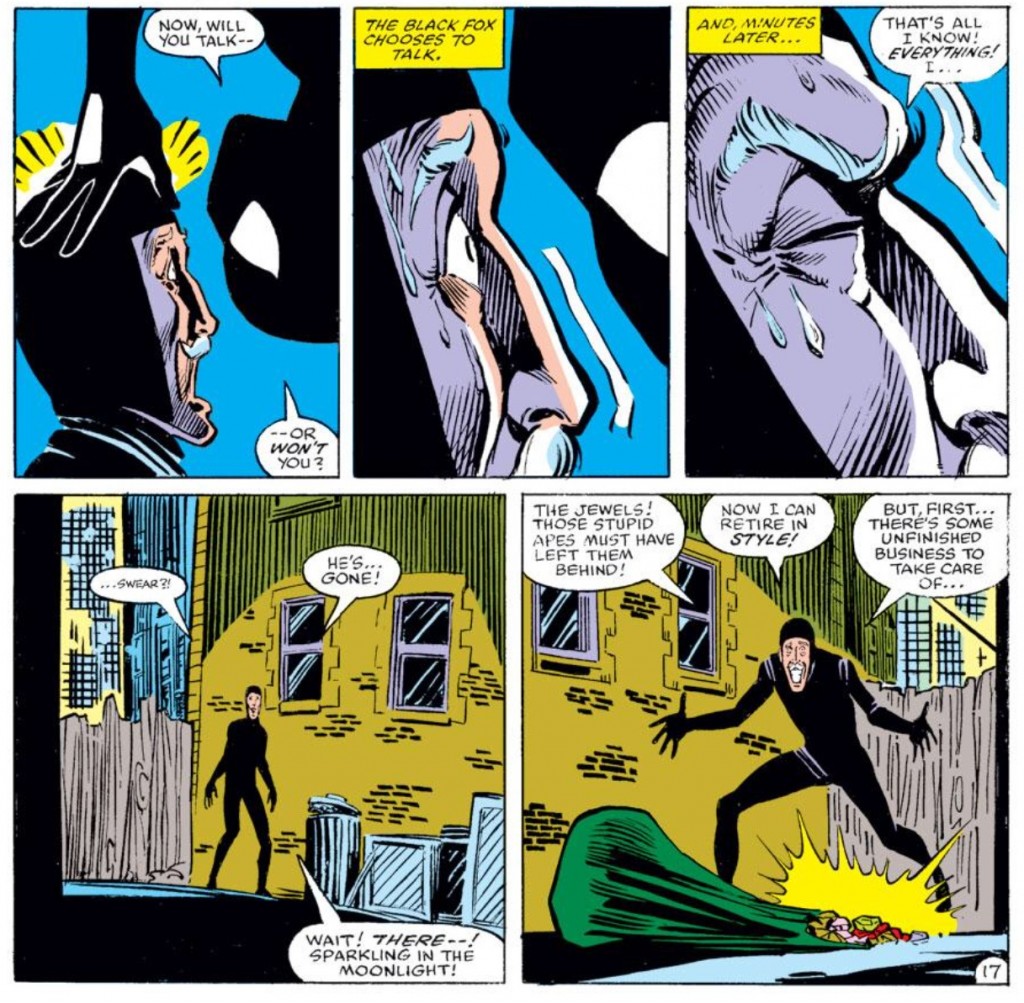 If I’m being totally honest, the humor of Red Ghost and his Apes aside, ASM #255 is probably the weakest story in this run, and outside of a few details involving the costume (why did Spider-Man sleep all those hours after we saw it snaking its way towards him?) and a glimpse of the Hobgoblin at the end, doesn’t do a terrible lot to advance the larger story that was unfolding in Amazing Spider-Man. Fortunately, via the power of SPOILERS and having read this arc years ago, I know the meat and potatoes of the “Alien Costume Saga” can be found over the next three issues, as we get the long-awaited return of Mary Jane, plus the debut of a somewhat underrated villain in Puma.

So in other words, come back here next week as the story heats up in advance of its explosive conclusion (I sound like a Marvel editor now!).

This is part four of Chasing Amazing’s lookback at the “Alien Costume Saga.”