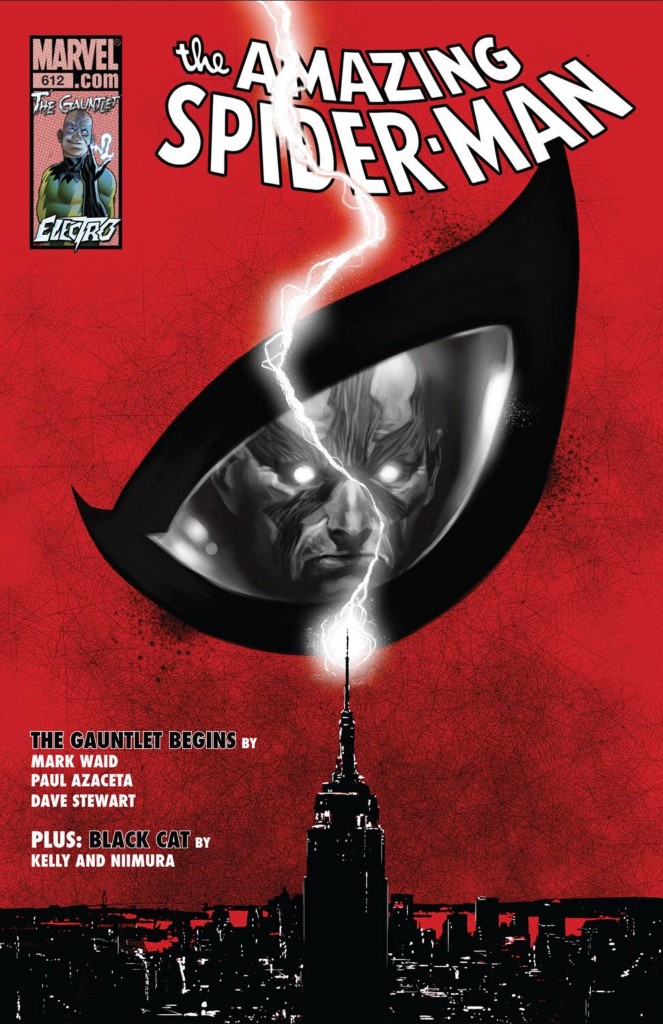 I’ve always been a bit squidgy when the real world of politics intersects with the fantasy world of superhero comics. That’s because regardless of the creative team’s beliefs (and how they coincide with my own), there’s always the inherent risk that a politically-charged comic might devolve into something that focuses more on allegory than actually telling a superhero story. I read Spider-Man comics chiefly because I want to read about what is happening to the characters that inhabit the character’s universe, not because I want some insights about what a certain writer thinks about Republicans, Democrats and every other political persuasion in-between.

Mark Waid and Paul Azaceta’s three-part “Power to the People” arc, as featured in Amazing Spider-Man #612-614, is a not even remotely subtle reference to the rise of the anti-rich/anti-corporate bailout movement that started in the United States around 2009. The arc stars Electro as a catalyst for a blue collar movement against the super rich Daily Bugle publisher/editor Dexter Bennett. 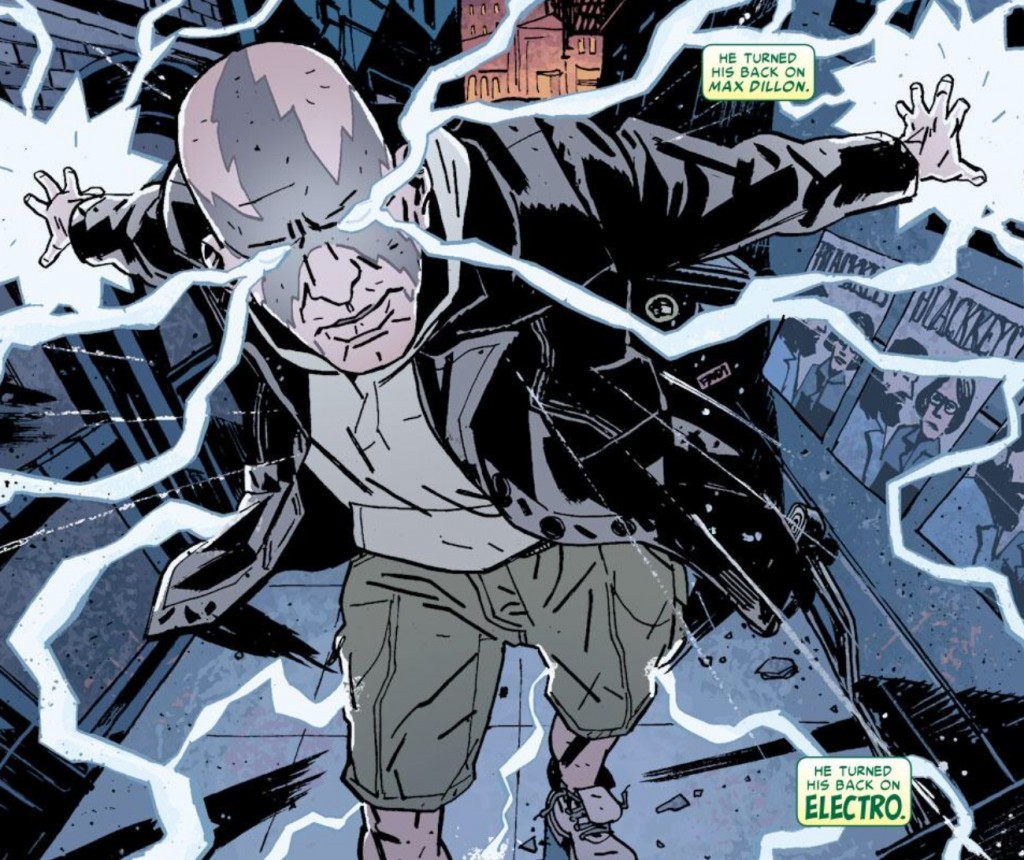 Unlike other “political” Spider-Man stories, “Power to the People” is quite good, in large part because Waid’s script lampoons both sides of the idealogical aisle, while also using established continuity and characterization to build its narrative to a point where real world events have believable consequences in the comic book universe.

As has been the theme of all my other Electro posts over the past month, Max Dillon is once again depicted as being way over his head – a villain with a potentially lethal powerset who can’t control it and is unable to gain any kind of traction as a force to be reckoned with. When he approaches the Mad Thinker for an upgrade to his electrical powers, the Thinker mocks him for not having the cash on hand to improve himself. Dillon, who has proven time and time again that what he lacks in ability he makes up for in his uncanny ability to take advantage of opportunities, puts himself on a webcam and goads the people of New York City to join him in his fight against a common enemy – Bennett, who had just recently received a government bailout to continue running Daily Bugle. 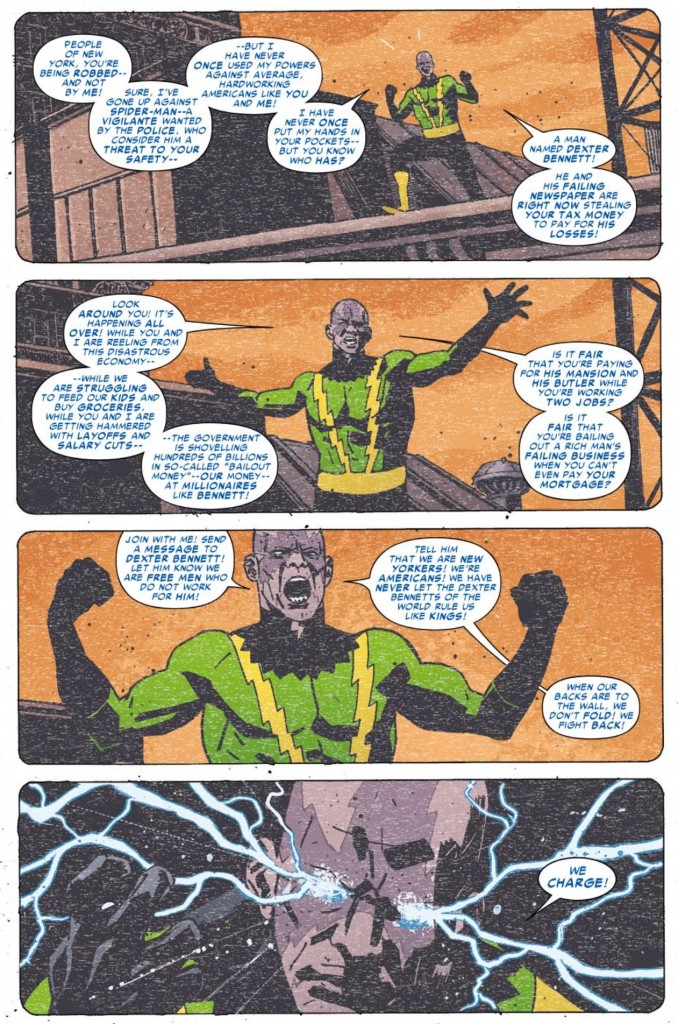 The motley rabble that Electro inspires in “Power to the People” spout off the political mantras of both the right-wing Tea Party movement (no taxes, no bailouts) and the left-wing “Occupy Wall Street” movement (we are the 99 percent). By blurring the politics of both groups, Waid effectively judges neither and both. He satirically demonstrates how ideologically similar the Tea Party and OWS are, despite the fact that both movements see the other as sworn enemies. And by making a career goon like Electro a leader (Spider-Man himself dismisses Max as a “C” lister in the story), it makes everyone who’s ready to string up Bennett look like a bunch of weak-willed crazies, unable to put aside their political rage to distinguish the heroes from the villains. 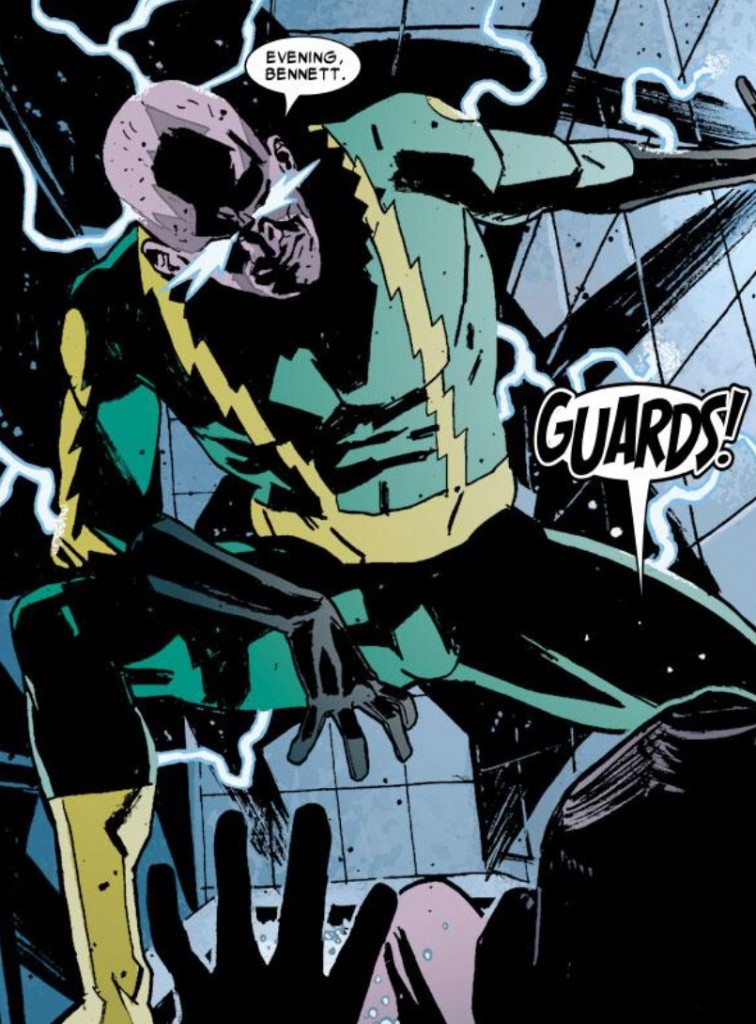 Similar to what I said about how Peter David utilized Electro in his “Return of the Sin-Eater” storyline, Dillon’s presence in “Power to the People” is an inspired selection and ties-in perfectly to the villain’s origins as a blue collar lineman.  For those who haven’t blocked out some of the theatrics from the 2008 U.S. Presidential campaign, Electro is similar to “Joe the Plumber” – a guy (who wasn’t even a plumber, but a political plant) who was able to tap into the zeitgeist by espousing middle class values/concerns mixed with aspirations to achieve the “American Dream” of being a self-made man.  Joe’s message rallied people around him (though it didn’t help John McCain defeat Barack Obama) and in many ways was a cornerstone of the Tea Party movement.

Of course, Waid’s script reveals that Electro is not actually working for the “little people,” but is instead hoping to use his newfound political clout to line his own pockets. Electro is initially validated by all of the attention his “power to the people” movement is generating, but he quickly realizes that webisodes and rallies don’t pay the bills. He blackmails Bennett by first threatening to touch the water he’s bathing in to flash fry him, and then tells him he’ll get his followers to protest anything the publisher/editor is attached to. And just to prove what a yutz Electro can be, even after seemingly succeeding in getting the money he needs from Bennett, he attacks him and the DB anyway out of spite. 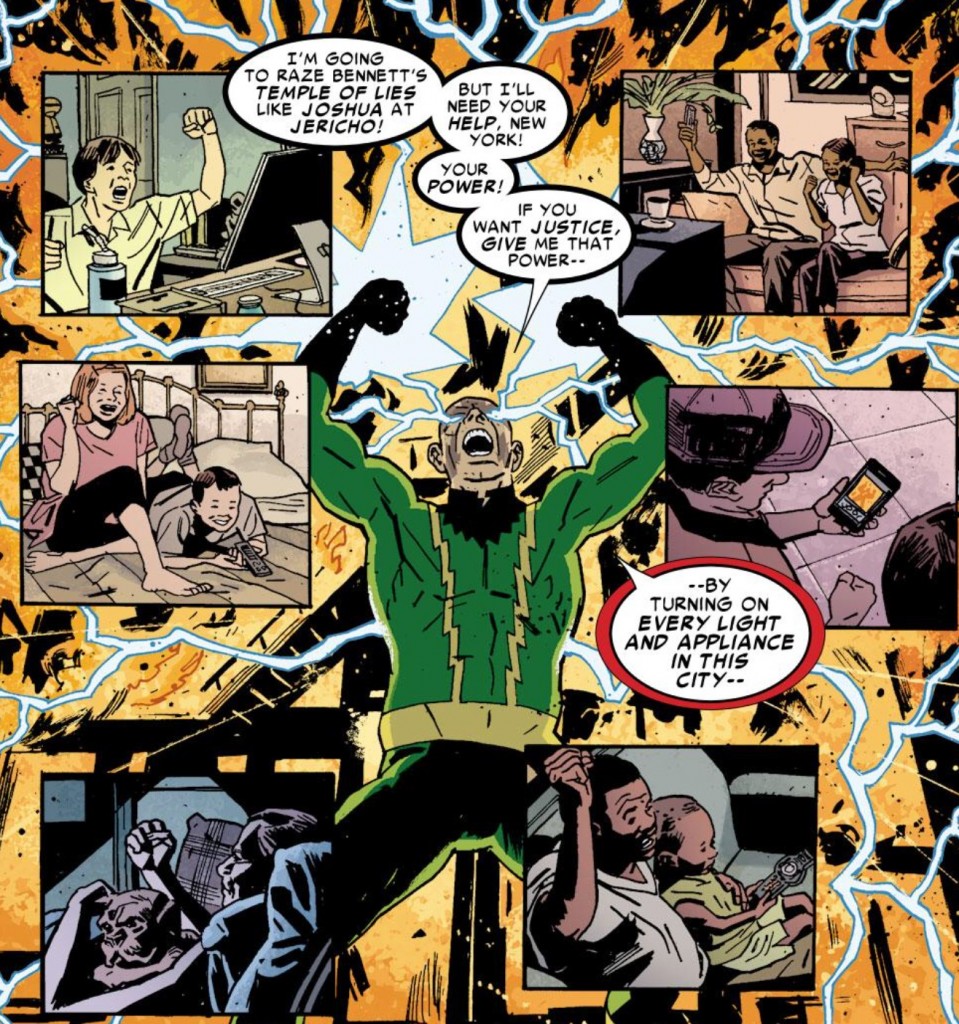 “Power to the People” also succeeds in that it in all of its political philosophizing it still leads to actual consequences for the Spider-Man universe. Between being “recharged” and becoming a hero to ordinary New Yorkers, Electro’s ego is running amok by the storyline’s final chapter. During the final battle sequence, Spider-Man – as is usually the case – uses his scientific knowhow to create non-conductive webbing that is resistant to Dillon’s electricity. But the damage caused by Electro is already done, and the DB building collapses, effectively ending the Daily Bugle era (which had been around since the very first issue of ASM). Just to drive home the ultimate moral of this story, Waid scripts a very poignant scene between Peter and Betty Brant – who was J. Jonah Jameson’s secretary at the Bugle when she was first introduced in ASM #4. Betty and Peter talk about their first days at the Bugle when Betty mourns the fact that for the first time in her adult life, she will now have to accept a New York City that doesn’t have the Daily Bugle as its fourth estate cornerstone (P.S., she also doesn’t have a job). Even Peter admits that the paper’s dissolution is a “dividing line” in his life. 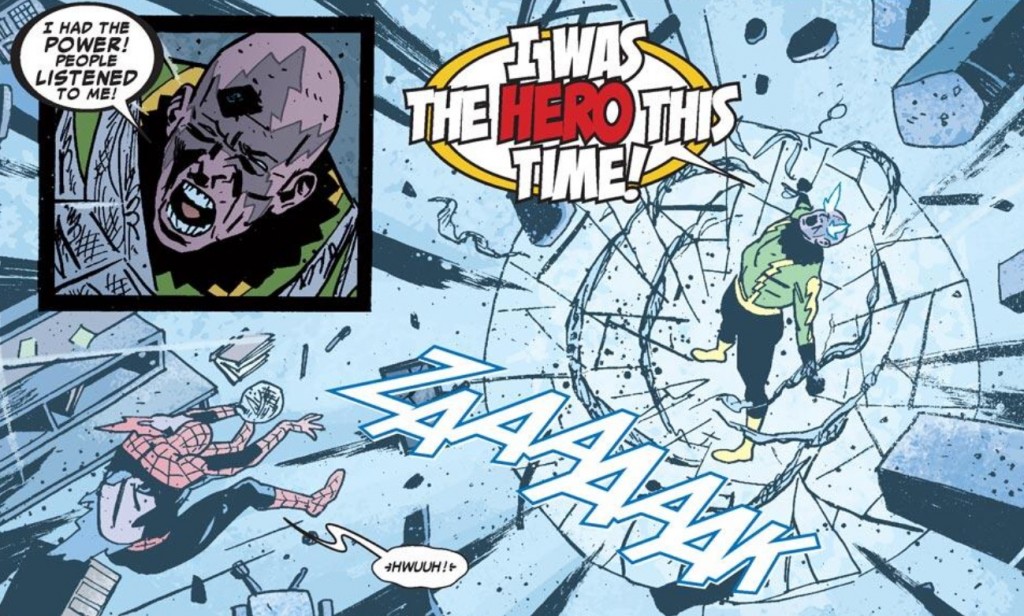 Certainly, the Bugle’s destruction can be blamed on the overzealous actions of a mad man, but it is worth noting that Electro was not only fueled by electricity, but by rage-induced ideology. Without putting words in Waid’s mouth, “Power to the People’s” ending demonstrates how our political divisions can sometimes have catastrophic results. The DB building is no longer standing and Bennett will be in a wheelchair for the rest of his life, while the real victims, the blue collar workers like Brant, have to rebuild their lives from scratch (despite the fact that Electro and the protesters were originally fighting on their behalf).

Because of this prescient and historically relevant moral, “Power to the People” isn’t just an instance of Marvel working in politics for the sake of controversy. It draws on the real world to craft progressive stories for the fictitious world. If a story is going to get political, this is the only way to do it without it coming across as some kind of ideological agenda.