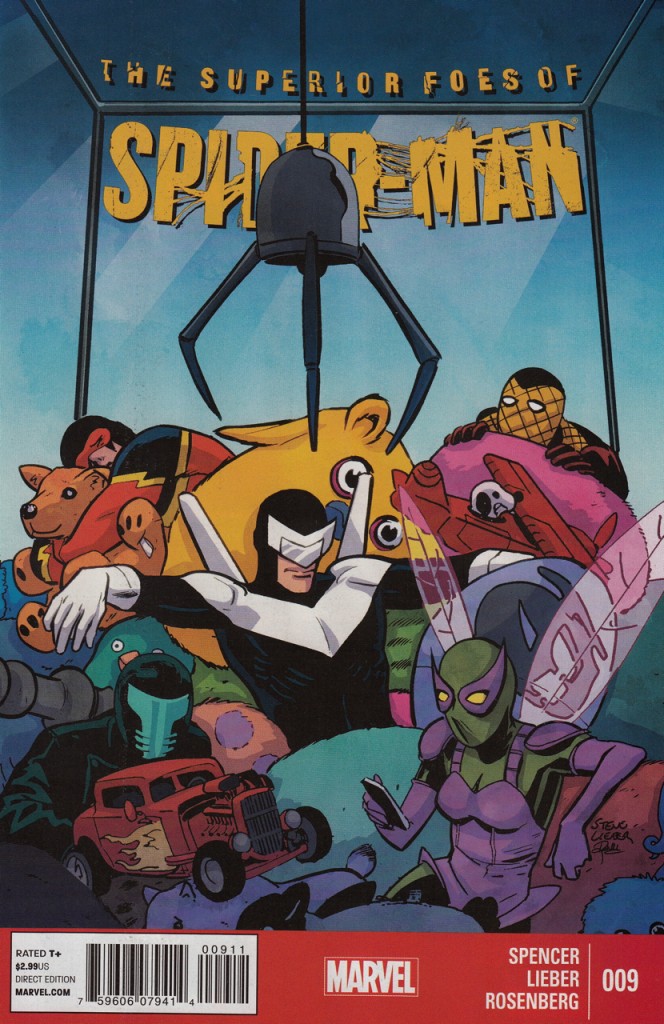 An earlier issue of Superior Foes of Spider-Man featured a monologue courtesy of everyone’s favorite unreliable narrator Fred “Boomerang” Meyers where he said that the criminal business was one about “relationships.” While the speech was meant to be tongue-in-cheek, part of what has made Superior Foes such a revelation is how behind every rapid fire joke, there’s a bit of truth and insight.

Every issue of this series focuses on these relationships – in fact one can argue that the entire premise of the book is built around Boomerang’s dysfunctional relationship with his four teammates (a team that can’t even call itself by the correct number of participants). But there was something special about the structure of Superior Foes #9 that made it read like the most relationship-centric of the bunch. In each of the three primary subplots, the featured character was being defined by the kind of relationship he has with another character.

Boomerang’s encounter with Bullseye (or a robotic replicant of Bullseye – which I was happy to see as the reveal since the original Bullseye last appeared in Daredevil as a parapalegic) defines Fred by the career he never had in the criminal underworld. While Nick Spencer and Steve Lieber have consistently played Boomerang’s general arrogance-turned-ineptitude for laughs, Boomerang does raise a very interesting point in this issue: how do two assassins with similar skillsets end up traveling on such divergent paths? Boomerang and Bulleye are both skilled marksman. Both have numerous screws loose (Bullseye is unquestionably more unhinged than Boomerang). So how does “Team Bullseye” get 1 million hits for a Twitter pic and “Boomerang Fan” gets none (outside of the whole “branding” thing Boomerang refers to). 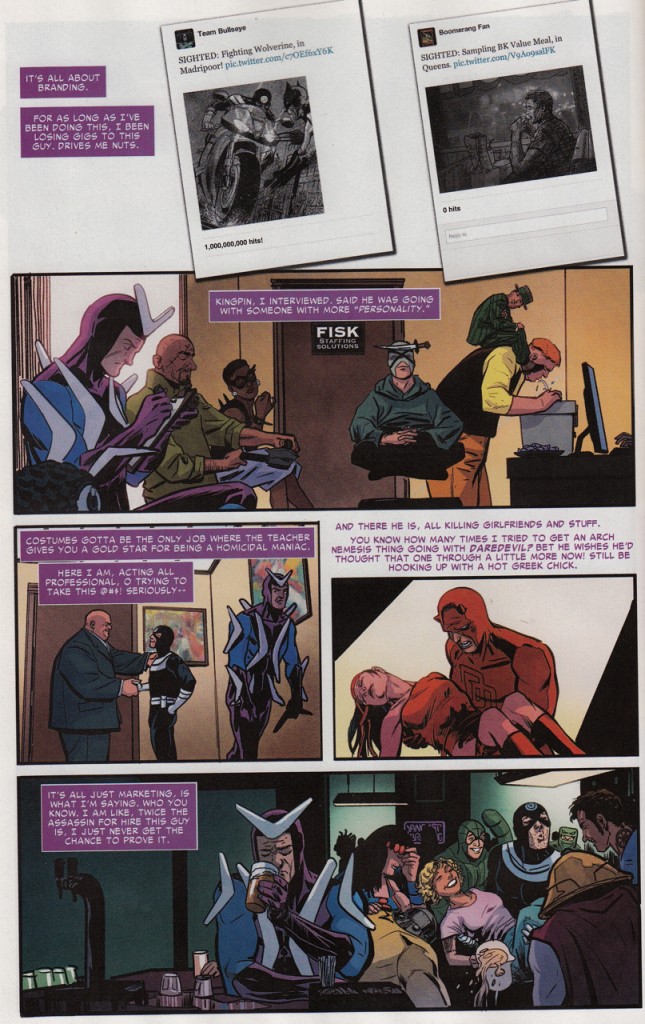 These are the kinds of things we take for granted in the world of comics. The simple answer to this question is, Bullseye got the better stories when he was tormenting Daredevil during the epic Frank Miller/Klaus Janson run on ol’ Hornhead’s book. Boomerang says that he tried to get a “arch-nemesis thing going with Daredevil” but it never took off. Instead, Bullseye gets to be the one to kill Daredevil’s ex-girlfriend-turned-assassin Elektra  in what may be one of the most famous scenes in comic book history. In all seriousness that’s not even branding – that transcends the simplicity of branding so much I’m not even going to attempt to come up with a word for it.

We frequently refer to Boomerang as a “B” list villain (or worse), but what do we actually mean by that? Yes, it’s a designation of “importance” as if these letter grades are static and firmly entrenched for the duration of the medium’s history. But we know that’s not the case. Boomerang is now the star of his very own series while Bullseye is making infrequent appearances in other comic books where he can’t even move on his own. But based on some kind of arbitrary scale, we as fans (and within this Spencer/Lieber’s universe) view Bullseye as an “A” lister. Perhaps if Miller decided the guy with the boomerang on his head was a more worthwhile character to explore than the guy with the bullseye on his head, history would be dramatically different.

And what makes this storyline all the more fantastic is that it tightly plays into the history of the comic book characters. While Bullseye was killing Elektra under Miller’s pen, Boomerang was an occasional foe during the Bill Mantlo run on Peter Parker The Spectacular Spider-Man. He tries out for the Kingpin’s gang (and is referred to as a “bungler”) and then in a later issue, we see Boomerang in jail where he’s even referring to himself as a guy who doesn’t miss (and I remember reading that for the first time thinking to myself, why is Boomerang stealing Bulleye’s shtick?). During a recent conversation I had with a comic book fan/writer, we talked about how Mantlo’s Spectacular stories evoked the street-level themes of Miller’s Daredevil more than probably any other era of Spider-Man stories. 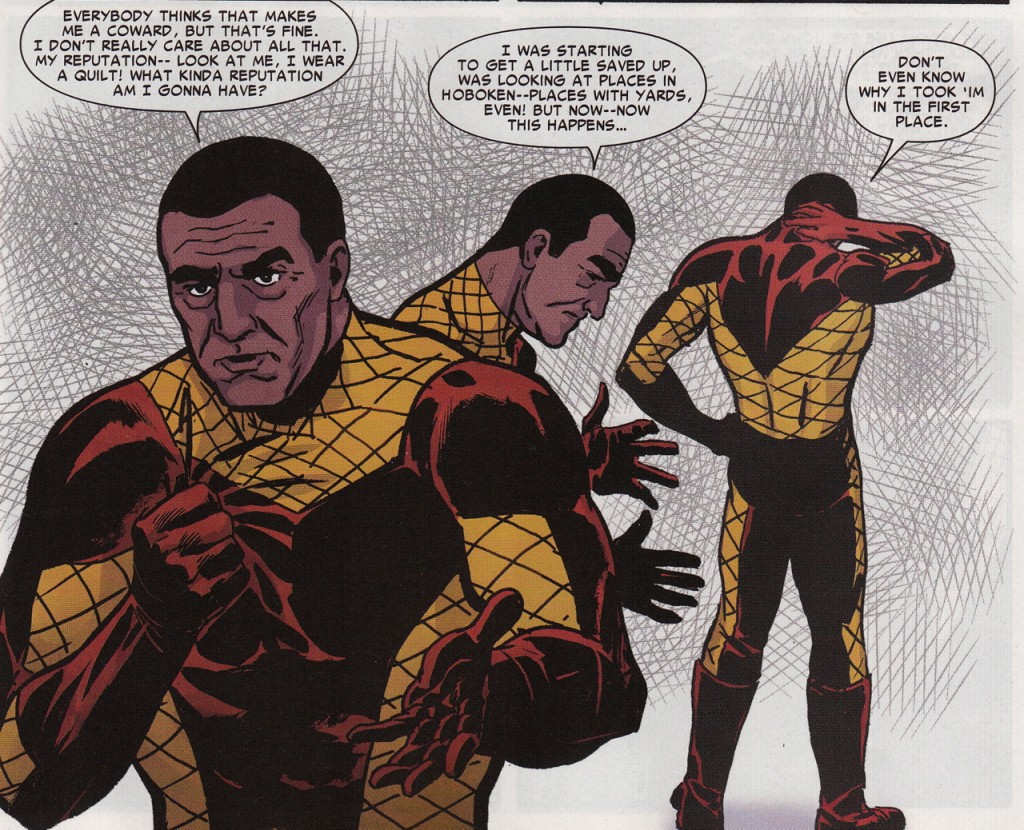 But there are more relationships at play in Superior Foes #9 than just Boomerang and Bullseye. Shockcer has emerged as the second banana in Superior Foes and his current subplot involving the disembodied head of former Maggia boss Silvermane remains a comedic highlight. In Superior Foes #9, Shocker gets a visit from another low-level villain in Hydro-Man who sees his old buddy with Silvermane’s head and wants to know how he hasn’t already used this creepy acquisition to push for any kind of physical or monetary leverage in the underworld.

But the cowardly Shocker doesn’t want to be defined by what Silvermane’s head could mean for his career, and is more interested in sitting down with an old friend and trying to find a way out of the corner he’s painted himself into. Unfortunately for Shocker, Hydro-Man isn’t interested in that kind of relationship and after escaping through the “John,” he’s presumably going to bring back with him some muscle that will either convince Shocker to make a move, or take Silvermane’s head and make their own move on the criminal underworld. 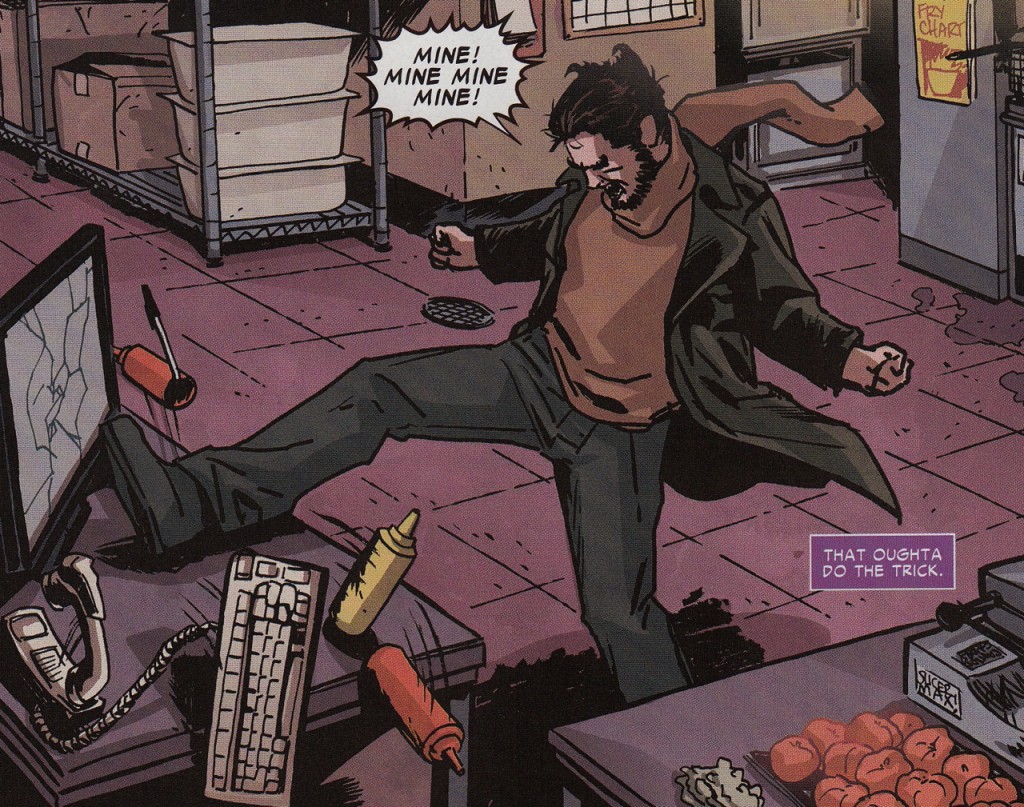 The final relationship that is spotlighted in this issue is between two criminal chiefs in Owl and the Chameleon. Both are claiming ownership to the mask-less portrait of Victor Von Doom that Boomerang stole a few issues back but both are using Boomerang as an intermediary fall-guy for their loss rather than try and escalate some kind of large-scale mob war against each other. But because Boomerang succeeds in playing the both off of each other (by feigning innocence to the Owl about the portrait – Boomerang questions why would someone of his stature would try and cheat the guy who lets people get eaten alive by rats) some kind of underworld explosion is looking more and more likely.

The issue ends with a reminder of what has otherwise been the forgotten relationship in Superior Foes – Boomerang and his three other mates in Beetle, Overdrive and Speed Demon, who were left for dead during the ransacking of the Owl’s fortress. Up until this point, Boomerang’s team has waffled on the idea that he is their leader. One has to think the way Superior Foes #9 ends that these relationships are inevitably going to be defined much different in the very immediate future.