After reading the first installment of the Carnage USA miniseries by Zeb Wells and Clayton Crain, I waxed poetic about why I was never much of a fan of Carnage, the character. However, I wanted to give the mini a chance because so many people seemed to enjoy the last Wells/Crain Carnage series and because I was curious to see if now was finally the time where someone was going to do something entirely new/different with Cletus Kasady’s serial killer symbiote. 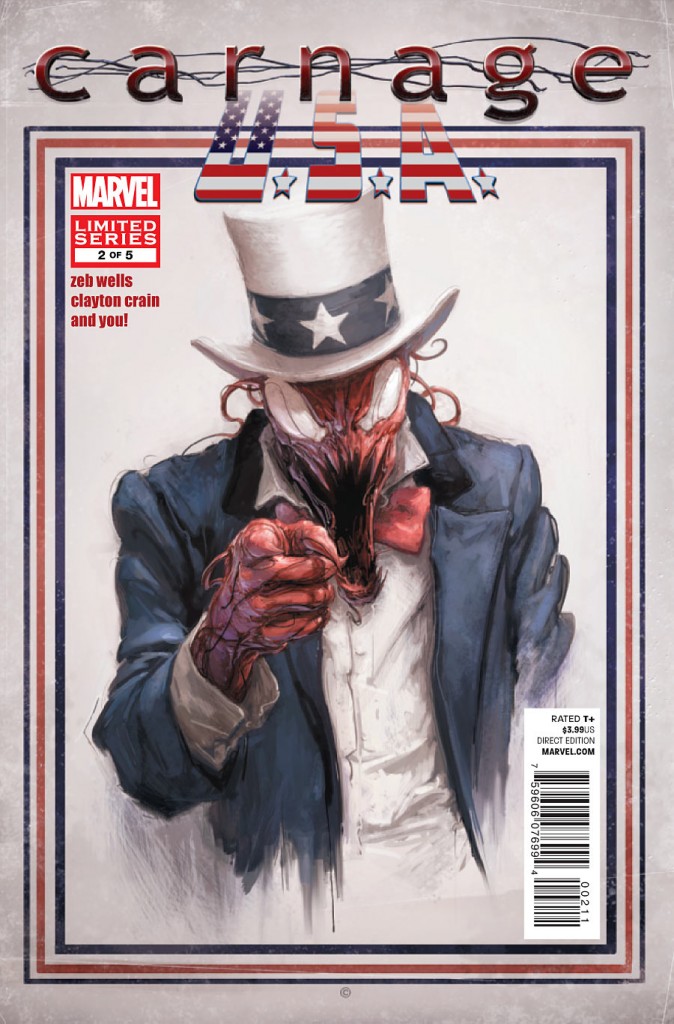 Alas, the remaining four issues of Carnage USA produced more of the same from Carnage – plenty of blood and guts with little to no character development or evolution. Not to pick on any of the other fantastic Spidey-universe bloggers out there, but while reading the letters page in Carnage USA #5, I noticed one known symbiote-fan praising the Carnage/Venom showdown in the series for (paraphrasing) “bringing us back to the 1990s.” And yes, while that might float some of your boats out there, that’s precisely the reason I really didn’t go for this series, because it’s just more of the same stuff I’ve read in every other symbiote story from around 1992-1998 at 4x the price on newsstands. If I wanted to relive Carnage/Venom battles that felt fresh and exciting, I could just boot up my complete ASM DVD-Rom and go back and read issues #361-#363 not drop $3.99 for an update. 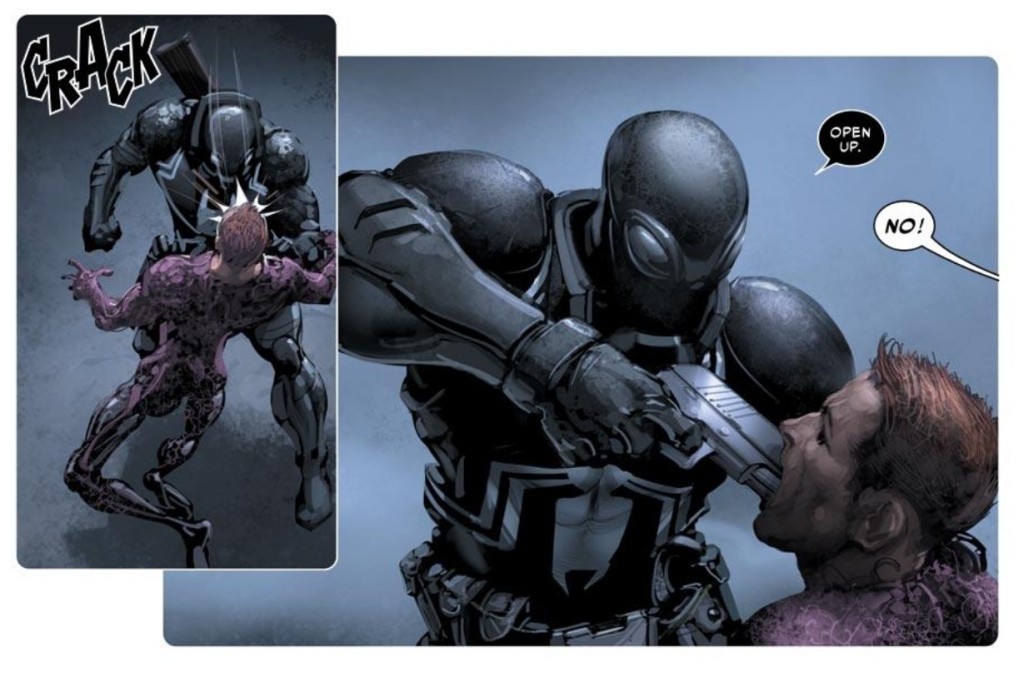 Not that there wasn’t potential to do something new here – at least on the Carnage/Venom front. With Eddie Brock now trying to save the world as Anti-Venom, and long-time Spider-Man bully turned U.S. Army covert-ops specialist Flash Thompson donning the Venom symbiote, there was a new dynamic that could have been potentially explored with Kasady and Thompson. 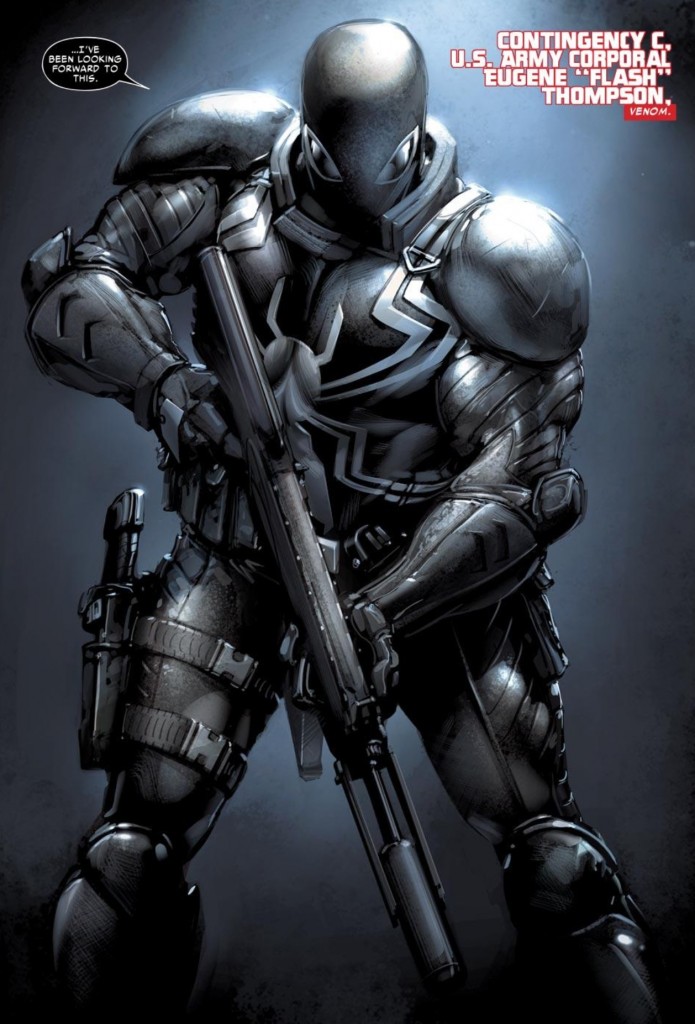 Instead, we have Carnage mocking Flash as a cripple and a battle between two legless people on the killing room floor of a factory farm. Yes, we did get the twist of Flash deciding to spare Kasady at the end – primarily because Spider-Man told him “no one dies” and Spidey is a hero of Flash’s – something Venom/Brock always refused to do. 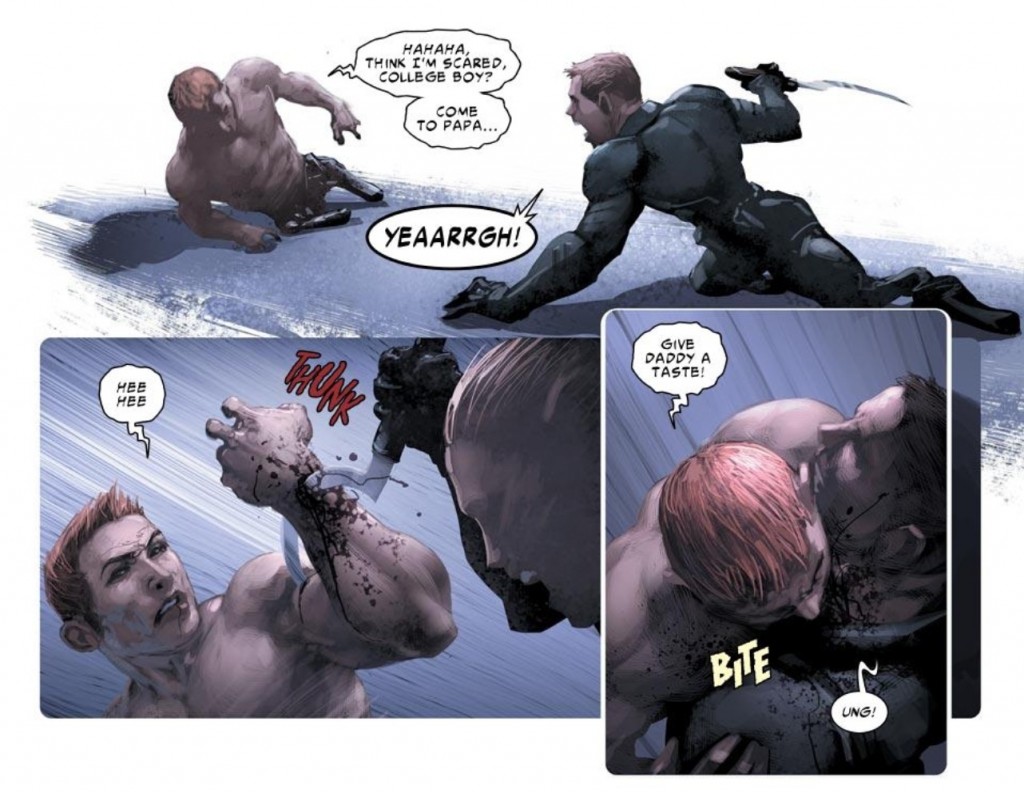 But nothing else happened in the five issues of blood and mayhem that made me think that if Kasady and the Carnage symbiote ever get back together again down the road, there would be an entirely NEW story to tell. And that’s more or less my problem with every Carnage story. At the end, you have nowhere to go with the characters except recycling the same old ideas (Spider-Man has a moral dilemma, the symbiote affects some other super-powered character like the Silver Surfer or the Avengers, Venom or some other rival symbiote is called in to take care of business, Carnage leaves behind a path of destruction).

With Eddie Brock supposedly coming to the side of good, perhaps he would have been an interesting character to bring into the mix, or maybe we could have witnessed a real power-struggled between Flash and the Venom symbiote once he had Carnage on the ropes, since the symbiote has come to hate Kasady with every fiber of his being, and Thompson just wants to make his teenage-idol proud by not killing his enemy.

Granted, those around the interwebs who enjoyed the series are praising it for its dark tone and horror-imagery, and yes, I guess from that standpoint Carnage USA is the kind of comic book that’s very unique from other books that are out on the newsstands – certainly a lot different from anything else Marvel has put forward in the past year. But just because there’s a stylistic difference in terms of presentation, doesn’t mean that this Carnage story is any different from all of the other Carnage stories Marvel has churned over the years. Just because this one has people getting impaled by meat hooks and children being taken over by the symbiote, doesn’t mean that this series is suddenly an exceptional case of storytelling. Considering some of the brilliant stories Wells is churning out on Avenging Spider-Man, I don’t think it’s over-the-top of me to expect more from this series.