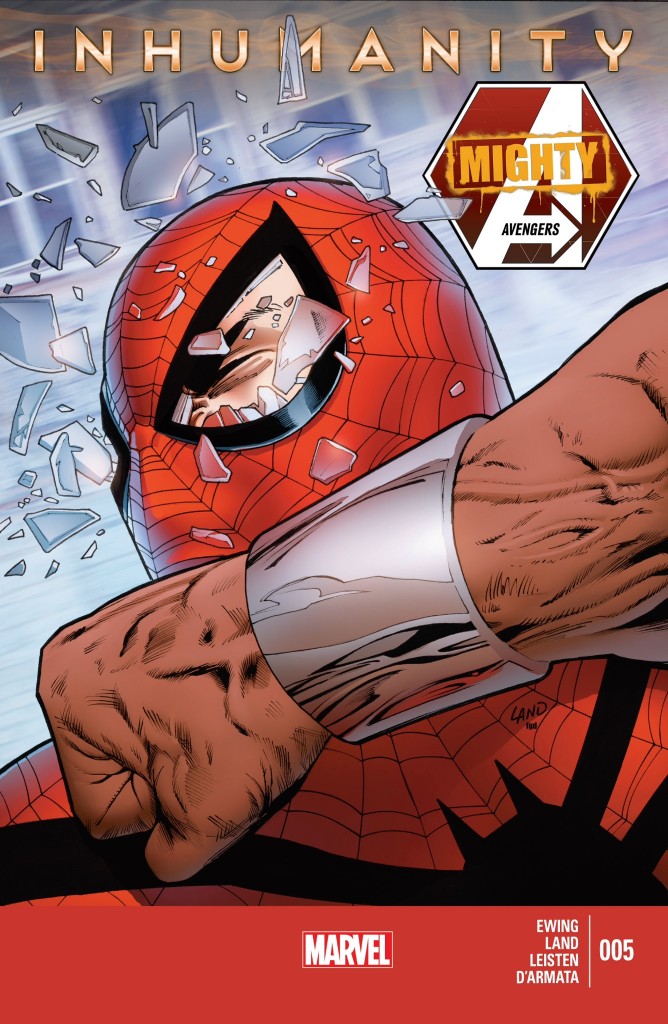 I haven’t written about Mighty Avengers since its first issue, but given how its most recent storyline feels connected to some of the larger things happening to the Superior Spider-Man character in his own series, I figured Mighty Avengers #5 was worth a quick dissection from yours truly.

Much to my surprise, I’ve become quite fond of Mighty Avengers, and specifically Al Ewing’s characterization of Spider Ock. So it’s with a bit of sadness that it now appears that Spider Ock’s tenure with the team and as a featured player in this series has come to an end. Obviously, Spider Ock was a terrible fit for the Luke Cage-led Avenger B-team, but that’s precisely why the character was so much fun to read about in Mighty Avengers. Eventually Otto’s arrogance and pompous attitude was going to end poorly for him, and with the rest of Spider Ock’s professional and personal relationships currently disintegrating around him, Mighty Avengers #5 was a good time to pull the trigger on his inevitable exit.

Spider Ock’s confrontation with Luke Cage, Jessica Jones, and later, She-Hulk, is presented perfectly by Ewing and artist Greg Land. There’s a lot of punches and haymakers being thrown back and forth, but it also manages to nail a number of emotional beats AND be just pure fun to boot.

What’s not to love about Spider Ock talking like a condescending jerk to Luke and Jessica, trying to sell them on the merits of being two of his chief “underlings,” as he hypothetically leads the Mighty Avengers to victory? Land gives us a hilarious visual akin to a cut-away sequence found in sitcoms like 30 Rock or Arrested Development where Spider Ock imagines himself as Luke and Jessica’s drill sergeant (complete with a nifty hat). 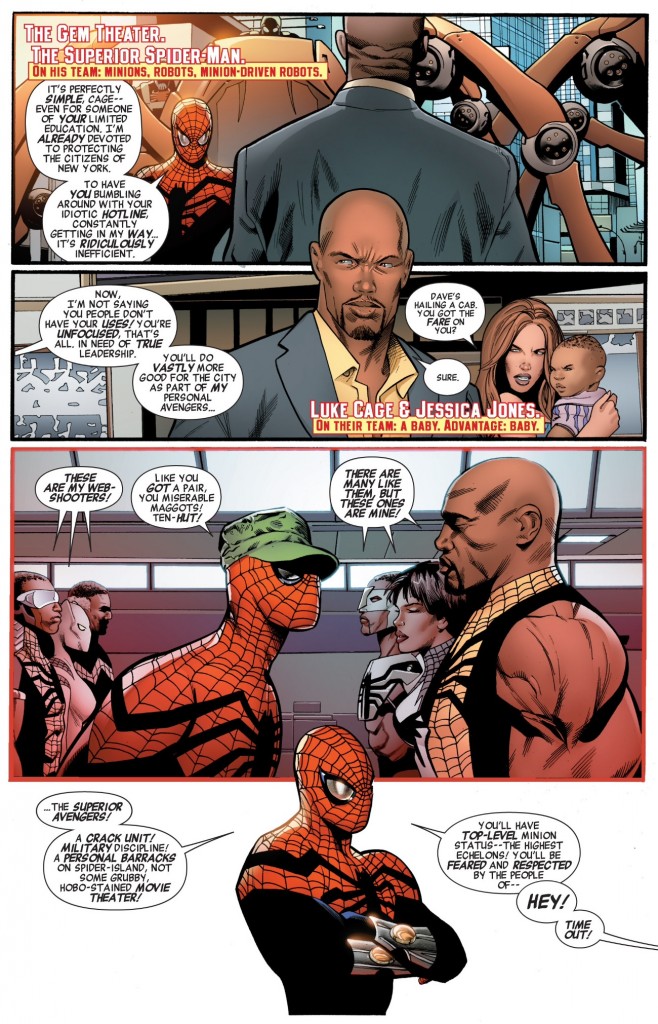 And Ewing/Land follow that up with a scene that I’m sure those of us who are just sick and tired of Spider Ock being so damn insufferable, have long been waiting for: Cage and Jessica decide enough is enough, leading to things getting physical between them and Spidey. I’ve been on the record in many different places saying I’ve quite enjoyed the Superior Spider-Man-era in Marvel, but watching the character finally start getting his comeuppance in all of these different series has also been very cathartic for me. As things spiral more and more out of control for Otto Octavius, it’s making me even more excited for Peter Parker’s inevitable return, even if it does come with a “twist” as Dan Slott promises. 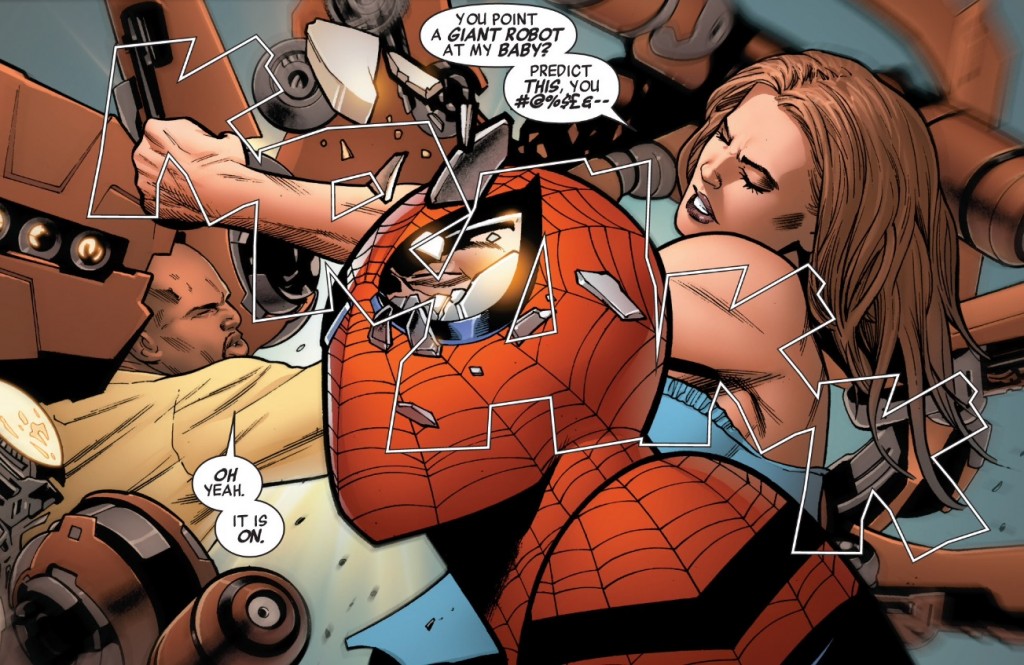 The Spider Ock/Cage and Jones showdown culminates with an appearance of She-Hulk, who lays the smackdown on Otto both physically and with some legalese regarding his recent crime-reduction strategies. Ewing scripts an especially effective line for She-Hulk: “The law is not yours to make up Spider-Man.” It’s a verbal knock-out punch that hits its mark, and in some ways, more effectively drives home the injustice Spider Ock’s egomania has brought upon New York City better than the scene in Superior Spider-Man #25 when the people of New York turned on all of Otto’s spider-bots. 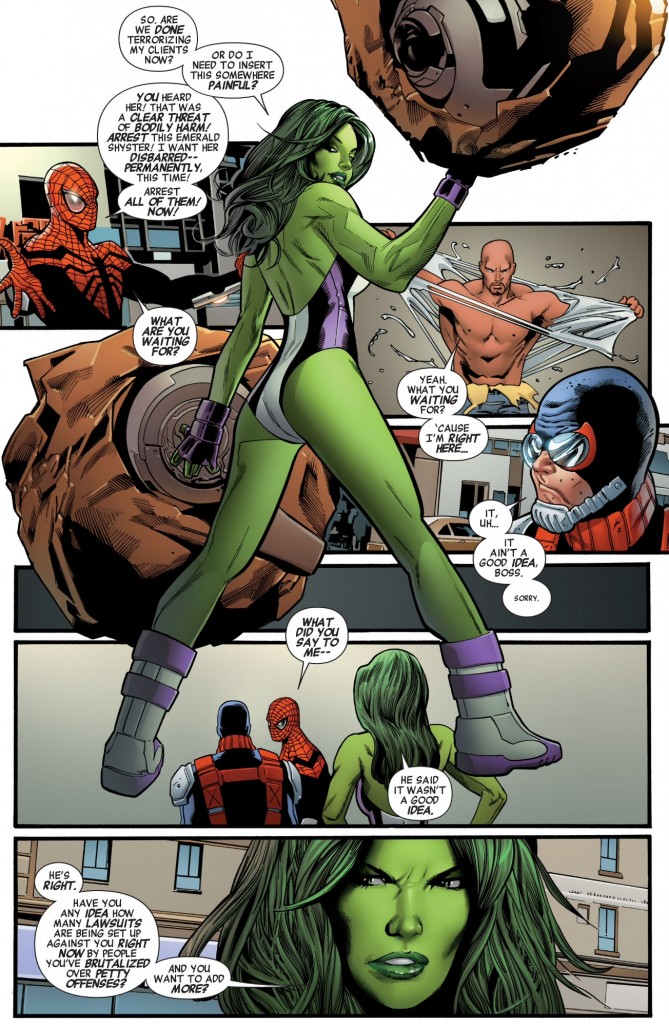 Whereas the scene in Superior #25 got lost in the shuffle thanks to yet another plot-heavy issue from Slott and Christos Gage, She Hulk’s verbiage is a true turning-point for the Spider Ock character with the Mighty Avengers series, as he sheepishly decides that he’s had enough of everyone’s abuse and he quits the team, planning to find greener pastures with the Avengers (who I guess, unbeknownst to him, have taken Spider Ock out of the rotation). 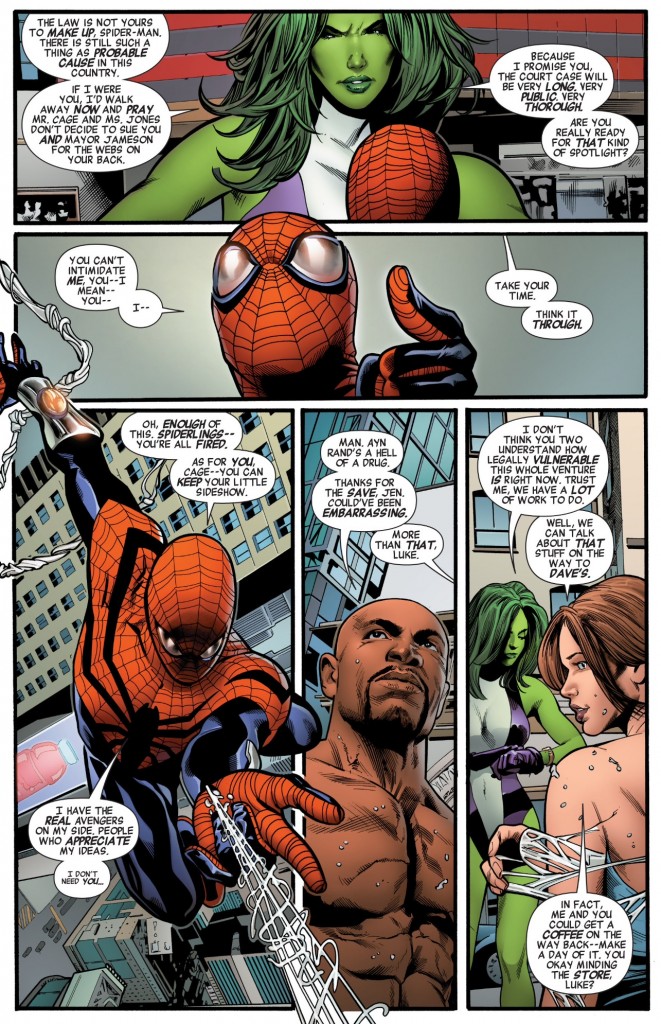 Mighty #5 also features a secondary story about the fall of Attilan, hence another Inhumanity crossover that we were all “begging” for from Marvel. But the book shines when the focus is on Spidey, Luke, Jessica and She-Hulk. If this is indeed the last appearance of the Superior Spider-Man in Mighty Avengers (and all signs point to yes for that), I think Ewing resolved this thread very strongly.

When I first read last year that Spider Ock was going to be a member of Mighty Avengers, I thought it was just another typical sales-related ploy – especially since the title seemed to be focusing on building an Avengers team with a lot of lesser-known minority characters. That wasn’t the case, as Ewing really seemed to have a handle on the character’s voice and quirks. Spider Ock’s constant friction with Luke Cage was a great twist on the positive relationship Luke and (Peter) Spidey had during the bulk of Brian Michael Bendis’s on New Avengers. With this friendship now damaged thanks to the events of Mighty Avengers #5, Slott (and anyone else working on Spidey-books) gets another potential storyline to tie-up (if he so chooses) once Peter is back in the saddle. So not only was the comic enjoyable, but it provides narrative fodder for future comic books.