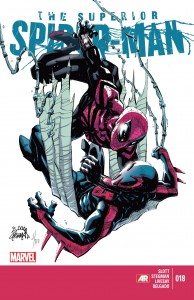 Superior Spider-Man #18 is an instance where the more time passes from my initial read, the more issues I seem to have with the comic’s plot progression, characterization, artwork and overall structure.

It actually pains me a bit that I feel this way because after the mediocre “No Escape” arc and the bombastically shallow “Shadowland” issue a few months ago, I thought Dan Slott and the rest of his rotating creative team had addressed some of the issues I had concerns about and were back on track in the storytelling department. I had particularly high praise for Superior Spider-Man #17, which was the first installment in this three-part arc involving the return of Miguel O’Hara/Spider-Man 2099, but this latest issue has me questioning the overall direction of this series again as I continue to struggle with the idea if these are characters I’m really looking forward to reading about every two weeks.

What’s even more alarming is that this comic seems to be getting universally good-to-great reviews from others places around the internet. It makes me wonder if I’m just being obtuse about what Slott is doing here. Ultimately, my biggest problem with Superior #18 is its lack of organization and its repetitiveness. There’s a LOT going on this issue, and yet so little actually happens. That’s to be expected of a middle section of a three-part story, but there’s a chaotic nature to how this story is told that might be by design, but feels more scatterbrained than pulse-pounding. 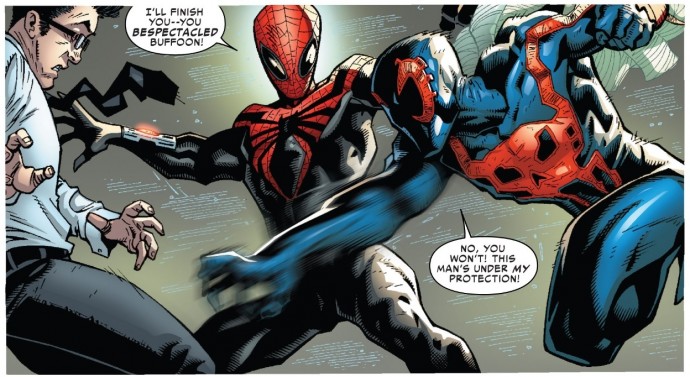 Spider Ock’s motivations and priorities seem to shift by the page. First he’s after Tiberius Stone and then he’s after Miguel. But then he’s trying to get his inventions out of Horizon Labs before Allan Chemical (still don’t know where this company came from, but that’s a story for another day) finalizes its takeover. Then Otto is getting calls about the Hobgoblin sighting, but it’s not Phil Urich it’s the “original” Hobgoblin EXCEPT its actually the Green Goblin in disguise. Finally Spider Ock is back to confronting Miguel except the comic just abruptly ends on a note that’s designed to be a cliffhanger, but instead left me thinking that my copy was maybe missing a final splash page showing what Otto’s “what” reaction was referring too. 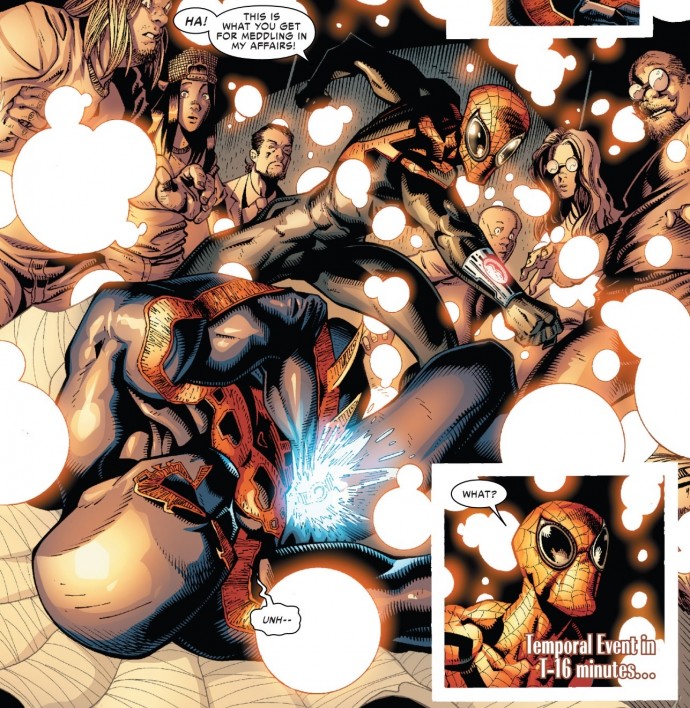 In the midst of all of Otto’s emotional pinballing, he is allegedly fired from Horizon Labs – a moment that should have gotten significantly more airtime than what it actually received here. Seriously, Slott’s first major plot decision when he took over Amazing Spider-Man full-time was giving Peter this “real” job at Horizon. To pull the plug on it with nary a reaction (or an admittance of regret) from Max Modell feels cheap and lazy. Maybe instead of wasting a single panel on a Mary Jane appearance so Otto can demonstrate some good old-fashioned misogyny, or another cameo of the Green Goblin, we could have had a better payoff to a storyline that was at one point part of the lifeblood of this series. I’m going to give the benefit of the doubt that Slott will revisit this development, maybe as soon as next issue, but in terms of how it was handled in this particular comic, I was shocked by its brevity. 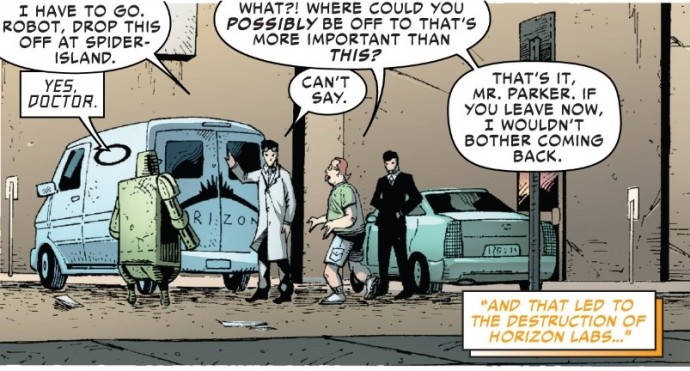 The overall wishy-washiness of this comic goes beyond Spider Ock’s characterization. Miguel also comes across as being indecisive and conviction-less. He’s been brought back to the past primarily to protect his grandfather in Tiberius Stone, but when seeing him in action, he immediately starts questioning which team he’s playing for. But that still doesn’t stop him from defending Stone from Otto, who he recognizes as being Peter Parker but also notices there’s something “off” about him. Of course, as has been the case with Daredevil, Wolverine, Mary Jane, the Avengers, etc. etc. etc. Miguel carries on with his life without thinking to follow-up on his instincts because … that’s just the way it is in the world of Superior Spider-Man. To be totally honest, I don’t even let it bother me anymore, but given Miguel’s conflicting emotions in this story, maybe this was the first time where a character pulled a Colombo and had “just one more question” for dear old Spider Ock. 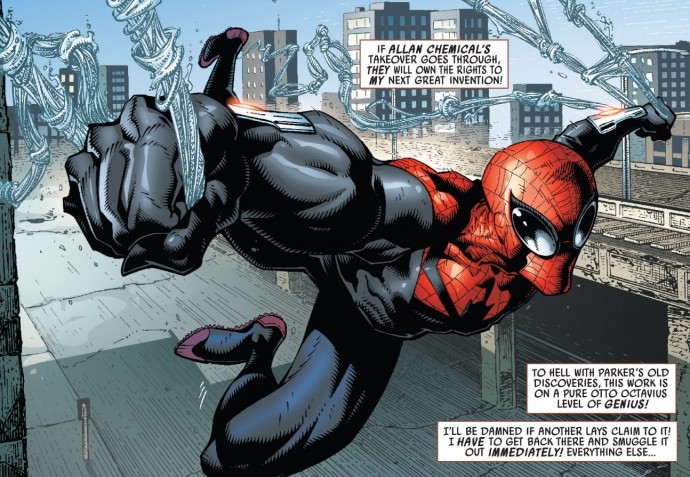 In terms of supporting cast, there was an out of left field moment involving Tiberius where he attempts suicide just to prove a point to Miguel. My problems with this sequence are twofold: first, Stone has been portrayed as the ultimate preservationalist since his re-introduction in this universe and I have extreme doubts that he would go as far as to throw himself off a building to test a theory about Miguel saving him no matter what. Additionally, the idea that Miguel is more or less betrothed to Tiberius due to the future-familial connection is well-established in this comic, so inserting this scene doesn’t advance the plot one iota (here’s another instance of where space and time were wasted that could have been better spent exploring one of Slott’s ideas in more detail, rather than a hodgepodge of plot blips on the radar screen). 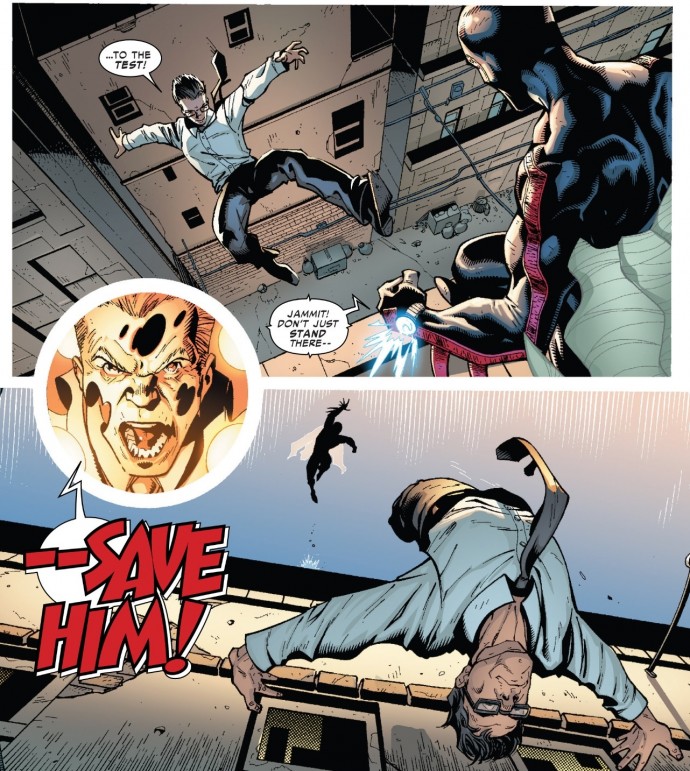 The thing is, I (think) I get where this is all going. As previously speculated, the over-the-top events of Superior Spider-Man #14 were clearly the “apex” of Spider Ock’s run at the top – his crowning achievement before the weight of being Spider-Man, a hero, for the first time in his life came crashing down on top of him. While Otto has minions and advanced technology to back up his boasts of superiority, he’s clearly struggling for the first time in his new life as Spider-Man and his struggle stem directly from the age-old Peter Parker problem of his work-life balance.

It’s difficult for me to complain about this plot development too much, since Spider Ock’s comeuppance seems both imminent and necessary, but I still wish Slott and co. would continue to explore the idea of Otto’s “redemption,” which we got a glimpse of during the Cardiac-arc a few months ago, but haven’t really touched on since. Plus, I honestly don’t “trust” (for lack of a better word) that the creative team won’t somehow introduce a deus ex machina that will restore the Superior order of things without any consequences or fallout for Otto (also known as the “Spider-Man is not a Skrull” effect). A look at the letters page in this issue shows that Marvel’s editorial leadership is still firmly entrenched in its “no more Peter Parker” mindset so it seems premature to think Otto will fall this hard, this fast at this stage of the game.