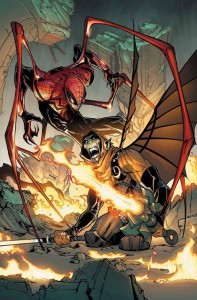 My tolerance for all things Superior Spider-Man was starting to go into a bit of freefall a few weeks ago, largely fueled by the events of Superior Spider-Man #14 (and to a lesser degree, the pointless reboot of Avenging Spider-Man as Superior Spider-Man Team-Up). For a story with a ton of action, explosions and status quo upheavals, the Superior saga was starting to resemble a big bowl of slightly stale potato chips. Sure, in the moment, I didn’t mind eating them, and after a few minutes of mindless crunching, I guess I felt a little full (or maybe bloated). But there was nothing fulfilling and sustaining about it and I thought writer Dan Slott was maybe sacrificing a little too much of what I enjoy about his writing of Spider-Man in favor of stretching out this story to greater lengths on the calendar.

Fortunately, Superior #15 was a breath of fresh air coming out of the bravado of “Superior Spider Month.” I still have some issues with how Spider Ock’s general “dominance” is characterized by Slott, but this comic also proves a larger point that should not be lost on the powers that be at Marvel. Superior Spider-Man is an infinitely more entertaining book when it falls back into the comfortable confines of Peter Parker’s universe. That’s not some kind of endorsement for the return of Peter RIGHT NOW, but I think I’m also not alone in thinking that the world Peter left behind when he “died” last year is more riveting than whatever is going on at Spider Island II. We’re talking 50 years worth of relationships and experiences here. You can’t just brush that aside in favor of a “new” toy.

And based on how things were crafted in Superior #15, I would guess that Slott recognizes this. There’s a pretty interesting moment about halfway through this comic where Spider Ock is sitting in his “iron throne” of sorts at Spider Island II and he’s contemplating some of his recent shortcomings like letting the Hobgoblin get away during his destruction of the Shadowland fortress. Otto questions if the albatross around his neck is actually his continuance of his dual identity as Spider-Man and Peter. He asks if he were to eliminate the Parker persona altogether and function solely as Spider-Man, would there be any great loss in his life and the world at large? 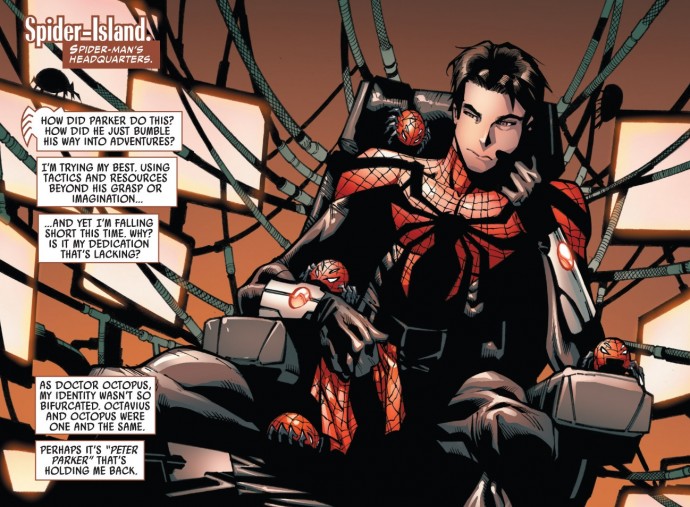 But Slott shows us in Superior #15 that a world without Peter would be a huge loss for Otto and others. We have some quick cut-away scenes with Aunt May and Mary Jane that show there are still people out there in this world who care for Peter and recognize his physical and emotional absence. Then there’s “Peter’s” budding romance with fellow student Anna Maria. After Peter skips classes for a few weeks, Anna goes to bat for him and keeps him on the path to his doctorate. When she talks of a “future” for the two of them, Peter/Otto is smitten by these prospects, begging the question, he’s not going to just burn this all down in favor of being Spider-Man full-time? 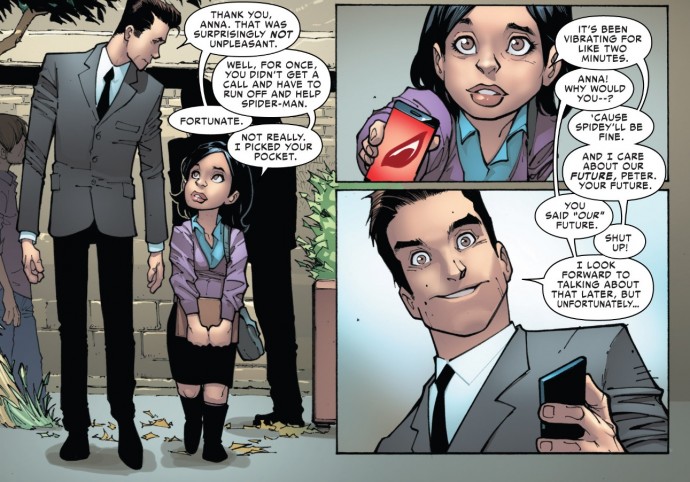 And there are other moments that showcase a return to “normalcy” in how Slott is weaving his story. We return to some plot points that were otherwise neglected as Spider-Man was out at the Raft and destroying Shadowland. Carlie Cooper and Captain Watanabe are back investigating why the masked hero has been acting so strangely lately. Among the Shadowland wreckage, Carlie asks Spider Ock point blank about his new aggressive attitude, and Otto in turn responds with his own twisted version of “great power/responsibility,” i.e. it was his responsibility to wipe Shadowland – which had been causing great harm and distress to the Hell’s Kitchen neighborhood – off the map. 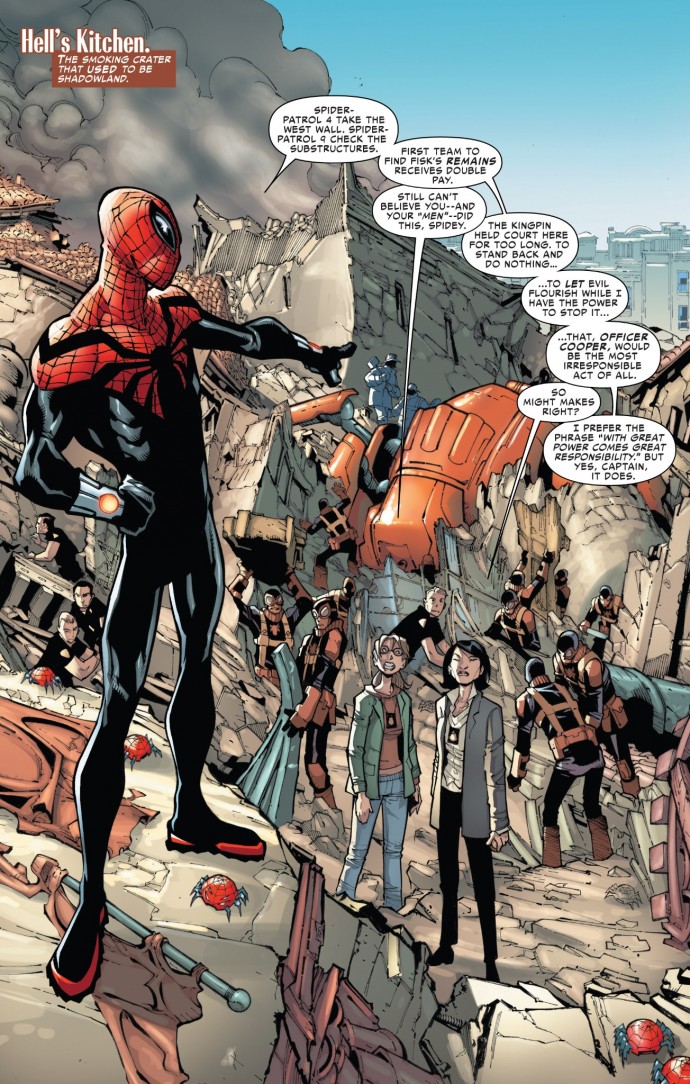 I personally love these little diversions into how Peter did things versus how Otto does things as Spider-Man. I think, at its core, this is what Superior’s story is about. I think when this storyline eventually ends, we’re going to be at a point where Otto’s ideology will be more aligned with Peter’s (and hence the character will be “redeemed” in some way). Depending on the issue, there seems to be some push-and-pull going on between pointing out the Peter/Otto parallels and keeping the characters as far away from each other as possible.

Beyond Peter’s supporting cast, Slott also works some great moments for characters like Phil Urich’s Hobgoblin. I’ve never been a huge fan of the Urich/Hobgoblin in general and kind of had my hopes up that when Roderick Kingsley returned last year he would assume the mantle of his old alter ego, but instead Marvel decided to push on with the new status quo. But rather than being an obnoxious, entitled creep, we see a desperate Urich in Superior #15. His technology is destroyed, the Kingpin is “dead,” a meaner Spider-Man is hunting him down and he needs to keep making some money to keep Kingsley off his back. If I didn’t know any better, I would have pegged Hobgoblin to be a part of Boomerang’s Sinister Six with the way things were going so sour for him. 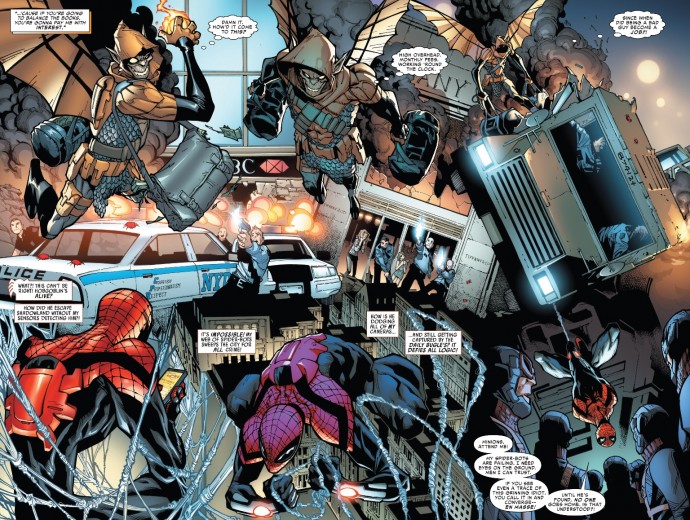 Vulnerability in your villains is a good thing. It helps readers relate. It also helps drive the story. How much better is the reveal at the very end of this comic because of all the set-up Slott did in establishing Urich’s life at rock bottom? Now I’m headed into the next issue of Superior actually curious to see how Urich can survive the mess he’s in. I’m looking at the teaser image for Superior #16’s cover and I’m worried that this character I previously had no interest in, is going to meet a very brutal end. 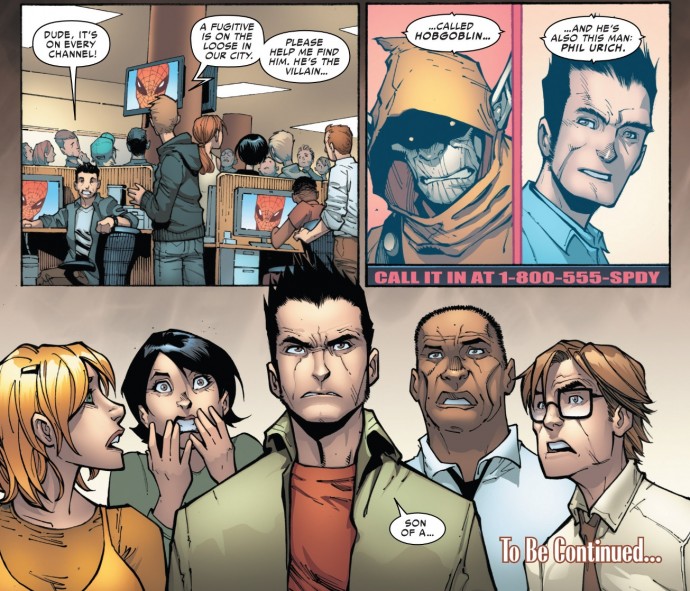 Finally there’s all the other little storyline details that Slott likes to work in. In a clear set-up to the Superior Spider-Man/Spider-Man 2099 storyline coming up, we have the return of Ty Stone, who, as my podcast partner Dan Gvozden pointed out in Superior Spider-Talk a few months ago, shares the same last name as Miguel O’Hara’s (Spider-Man 2099) father, Tyler Stone. So I’m going to go ahead and say Dan’s theories have been confirmed. 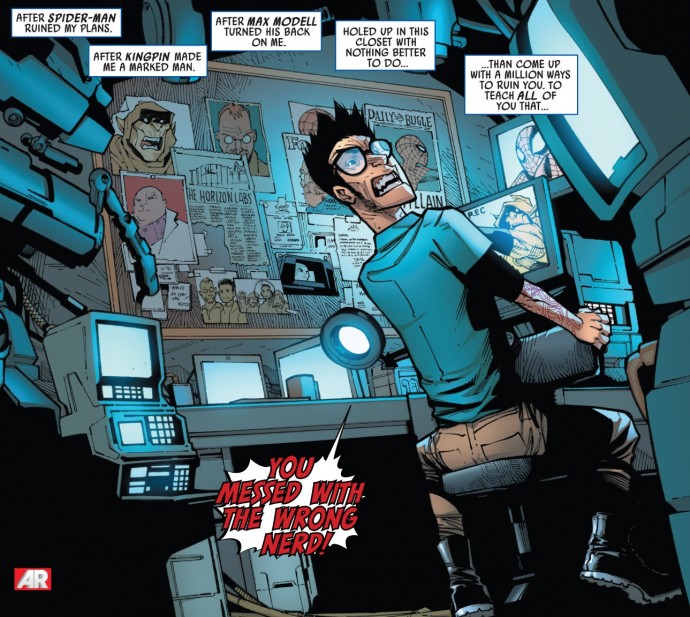 That’s not to say Superior #15 is without its flaws. We are still yet to see if there are any true consequences to Spider Ock’s behavior. Shadowland has been ripped down and NOBODY else in the Marvel universe has a thing to say about it except for Carlie? Spider Ock has the technological capability to take over New York City’s entire broadcast network to solicit help in tracking down Urich/Hobgoblin and nobody on the Avengers is remotely bothered by that? At least in this issue, the chinks in Spider Ock’s armor are starting to show and there’s reason to believe that he’s now starting the predicted fall from his apex that he reached in Superior #14. But I still expect Slott to resolve some of these plot points in a reasonable amount of time.