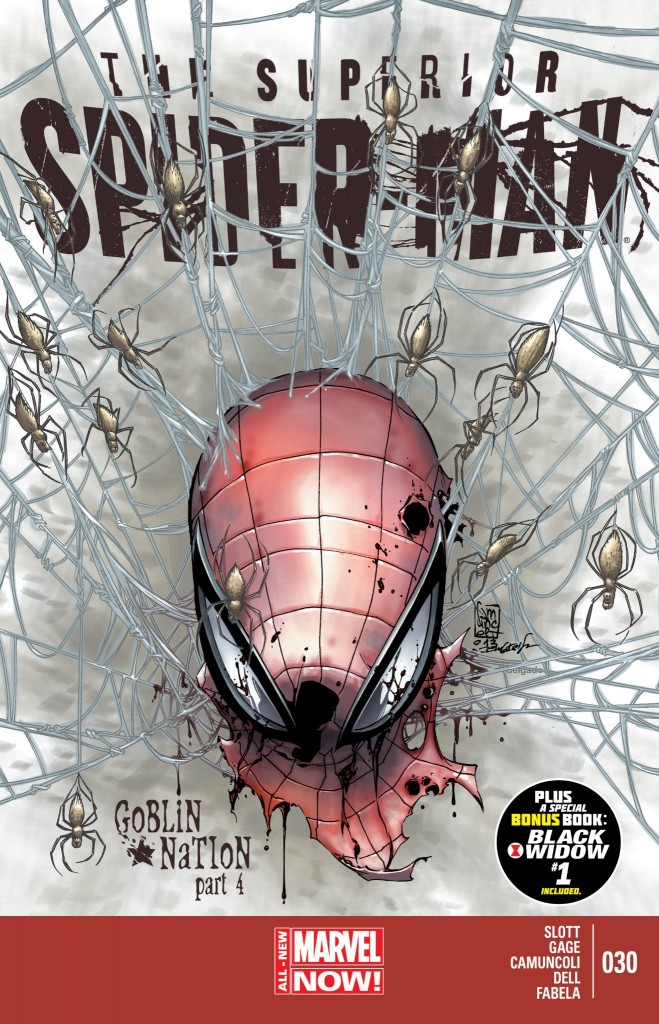 The Superior Spider-Man ride hasn’t always been a smooth one, and as recently as two weeks ago, I was starting to truly question the direction of this series and how it would transition in a rebooted “Amazing” era next month. But in Superior Spider-Man #30, Dan Slott, as he’s done numerous times before, has found a way to put my worst fears about my favorite comic book superhero at ease.

There’s still one more issue left in this series where a lot can happen, and a number of loose threads that need to be addressed for me to fully declare this landing “stuck,” but I undoubtedly believe this storyline is in a much better place than it was two weeks ago.

And that’s not just because of the return of the one, true (and “superior”) Spider-Man, Peter Parker at the very end of Superior #30. Peter’s return has been imminent and inevitable for months, but the big question continued to be how and under what conditions would Slott and co. bring him back. Again, a big part of me doesn’t want to take anything at face value because there’s “always a catch” when it comes to a Slott story (as he would say himself). However, unless there’s a major curveball thrown at the very last second next issue, my very worst fears of the Doc Ock as Spider-Man era continuing on well past its expiration date, have passed. 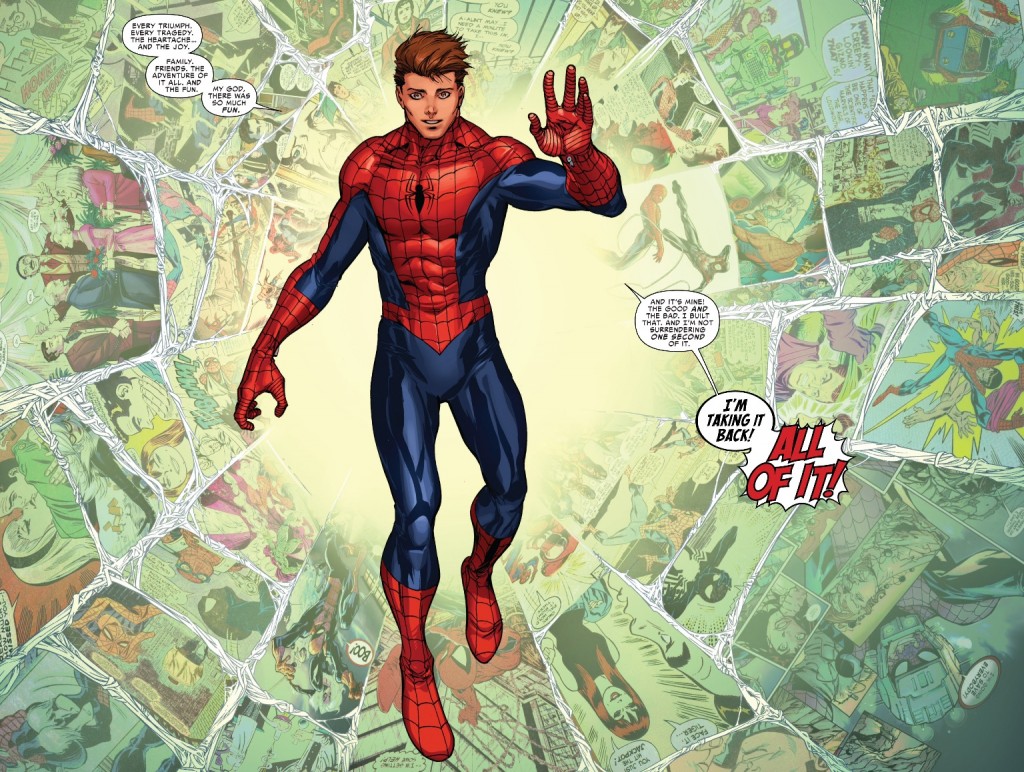 From almost the very beginning of the Superior era, I was hopeful that this storyline would follow a specific arc: Otto sets out to be superior, demonstrates that he can be a hero, he becomes arrogant and starts to slide, he realizes the error of his ways and redeems himself by yielding control of Spider-Man’s body back to Peter.

For me, this was the storyline that just made the most sense. It gives you a sense of redemption for Otto, while also reaffirming that Peter, flaws and all, is still the best superhero out there. I never bought into the fact that the point of Superior was to belittle Peter, or to put Otto’s methods on some kind of pedestal. People who thought that were taking the book’s title way too literally. Everything that Otto has been doing has been measured against Peter, even in the issues where Peter wasn’t present in physical or astral form. I have said countless times that Superior Spider-Man is a referendum on what it means to be Spider-Man.  And now the results of that referendum appear to be in, and Peter, as we suspected is actually the “superior” one. 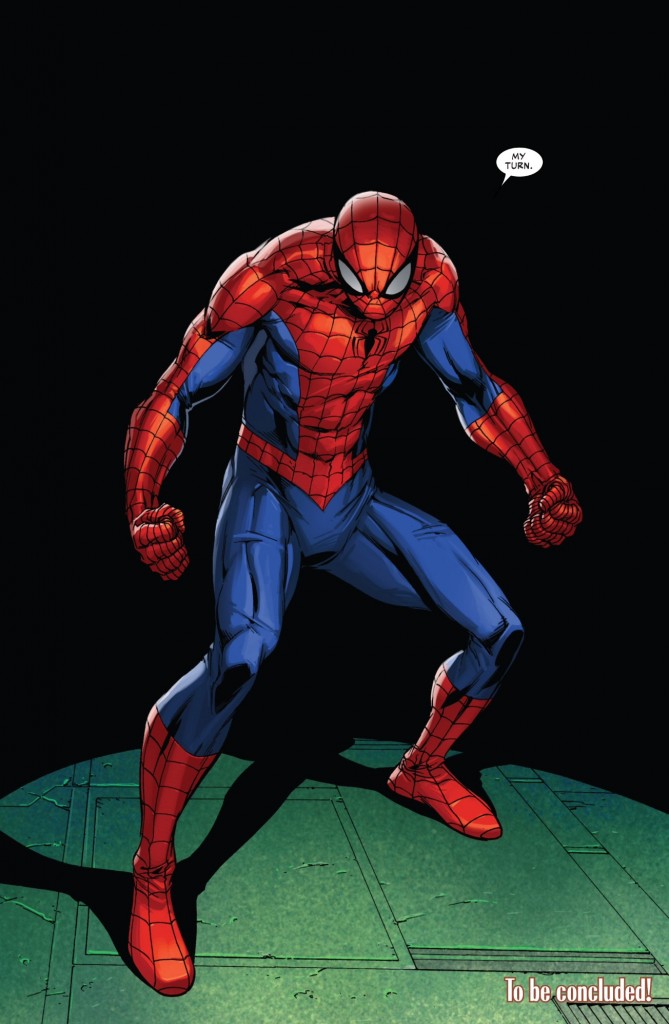 Having Otto’s love for Anna Maria as the impetus for his awakening works for me. Maybe it’s because I’m an old romantic at heart, but I see a man in Otto Octavius who can now admit that he has been completely outclassed and outfoxed by the Green Goblin. He has no leverage and no ability to gain any. His inability to find and/or rescue Anna Maria is his ultimate failure as a hero, which naturally leads to his greatest triumph as a hero – realizing that he was never a “true” hero at all.

The Peter/Otto scenes in this issue are another demonstration of how Slott writes some of his best stuff when he’s backing the drama and the explosions down, and focusing more on the characters. The quieter scenes are such a strength of Slott’s, I don’t understand why he doesn’t write them with more frequency. I know he wants to make sure readers get some bang for their buck and pack a lot in, but less can truly be more sometimes, especially when you’re dealing with two characters in Peter and Otto who are a lot of fun to read about. 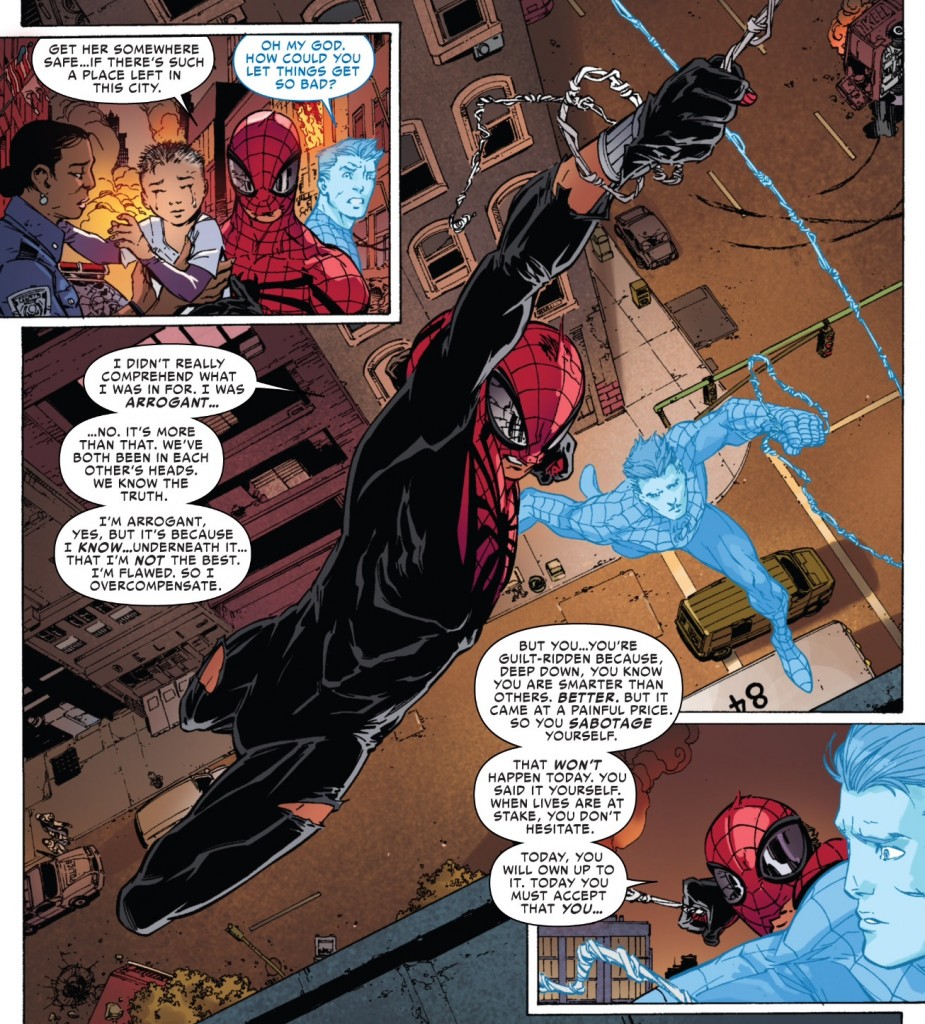 I loved the fact that this comic shows of just how well Peter and Otto now understand each other. Otto talks in this comic with such introspection and awareness. He admits to his own shortcomings, but in true Otto fashion, even when he’s down and out, he reminds Peter that he sells himself short when he shouldn’t. Otto may be a murdering sociopath, but his brilliance can’t be quesitoned. He and Peter are truly cut from the same cloth, but their backgrounds and life experiences have just caused them to travel at divergent paths. Or does it?

At this point, even after witnessing Otto wipe himself out, it’s impossible to know for certain if Peter and Otto’s interaction truly ends here. I’m going to go out on a limb and say it doesn’t. When Peter tells Otto that you “do the right thing … even it means giving up the advantage …” those words ring in my ears like church bells. Is Otto conceding his position just one more mind game from the “master planner” himself? Does Otto now have Peter right where he wants him? Anything is possible. 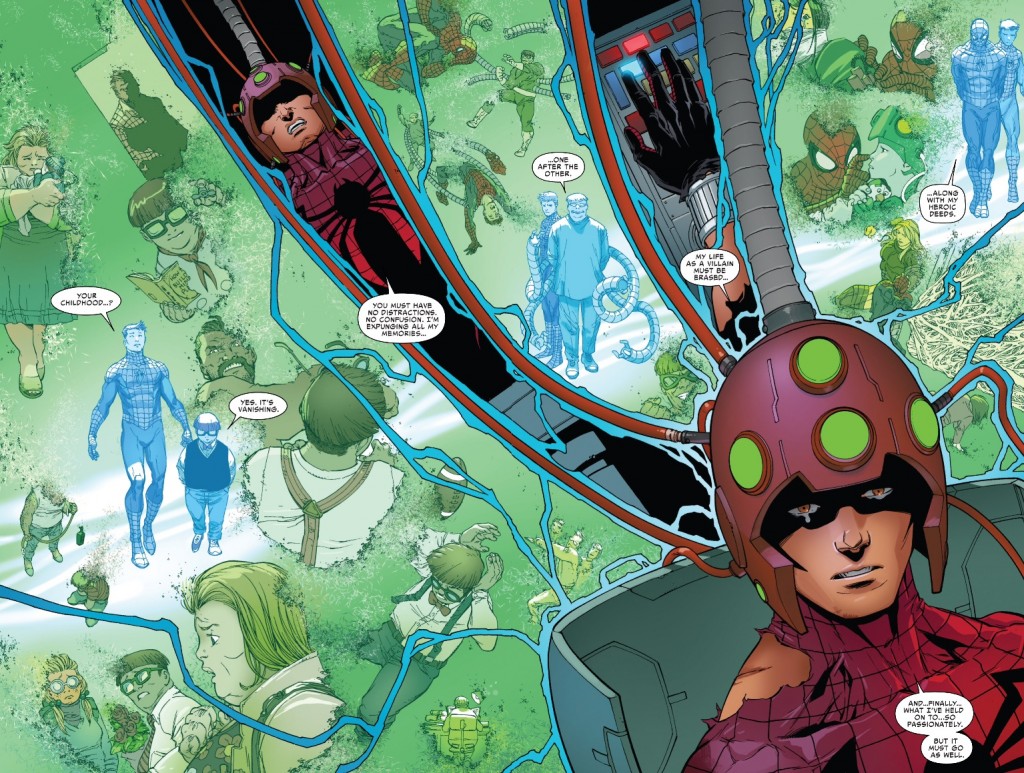 There were obviously a few other things of merit that came up in this issue. Most importantly for all of those who have been following the Green Goblin identity mystery so closely, we see a certain ex-wife of a certain son of Norman Osborn holding a goblin mask behind her back while taking to her son Normie. Is Liz Allan working with Norman Osborn or is this just one more red herring from Slott? Similar to what I said in my thoughts about last issue, I think I’m well past the point of truly caring about the Goblin mystery, though if it is in fact Liz Allan, depending on the explanation given, I could totally buy into it. Additionally – and apologies for keeping this charade going – I also wouldn’t be surprised if she was holding the mask for somebody else, or even hiding it from them. I don’t know, maybe someone like her son Normie? 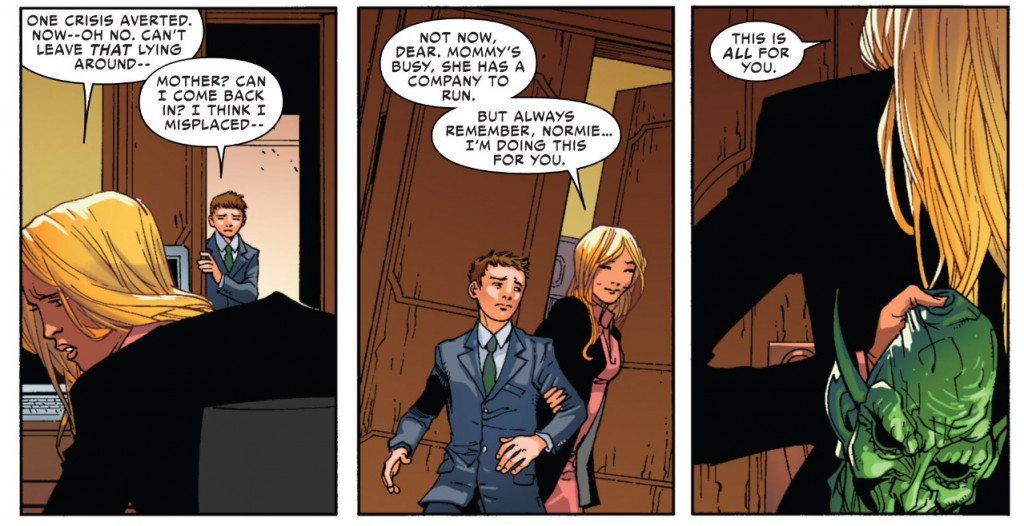 J. Jonah Jameson’s time as New York City mayor also appears to be marching towards an inglorious conclusion. With his cabinet mostly gone, and his business partners at Alchemax throwing him under the bus, is it really possible for Jameson to maintain his position of power in the greatest city of the world? And if Jonah is not longer the mayor, where can he possibly go from here?

Of course, the biggest plot point that will need to be dealt with is the world that is waiting for Peter once he is back for certain. The Avengers are already taking about “arresting” Spider-Man for his role in Cardiac’s underground clinic. Spider-Man is no stranger to playing the on the lamb, rogue superhero, though I wonder if Slott wants to go back to that well less than 10 years after the last time such a storyline took place.

One more issue to go here for Superior Spider-Man. I’m legitimately excited to read it and see how Slott is going to torture all of us headed in ASM volume three. I’m expecting to be enthused and enraged by whatever we get in two weeks. As long as it’s some combination of those emotions, I’ll be a happy camper.