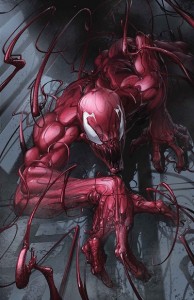 Oh, Carnage – you and I got such a complicated relationship. Actually, it’s not complicated at all. I’ve always been on the record as not being a fan. But I also understand there’s a contingent of the fan base that LOVE you. A lot of them are the same people who told me my criticism of the last Carnage-centric mini-series, Carnage USA, was unfair. I believe my exact words were: “But nothing else happened in the five issues of blood and mayhem that made me think that if Kasady and the Carnage symbiote ever get back together again down the road, there would be an entirely NEW story to tell.” And lo and behold, here’s Kevin Shinick (writer) and Stephen Segova (pencils) with that NEW story to tell, a brand-new mini-series that’s one of the core titles of Superior Spider-Man month, Superior Carnage.

But a funny thing happened as I was reading Superior Carnage #1 last week. I found myself enjoying it. I found myself laughing at the serial killer jokes and the excess of blood and guts. I found myself compelled by the book’s tone that wasn’t too twisted and demented, but was still considerably darker than any other Spider-Man book or spin-off out there. Most importantly, I found myself intrigued by a story, which seems to finally be going in a different direction than, “Cletus bonds with Carnage symbiote; goes on murderous rampage. Spider-Man and/or Venom sent in to save the day.”

The bit with starting with the narration from Ted Connelly, a white-collar criminal sharing a cell block with a lobotomized Cletus, only to kill the poor schmuck off in spectacular fashion after the symbiote returns? Brilliant stuff. What a fantastic way to homage the modern horror movie genre by introducing us to a character as our “central hero” only to kill him off by the book’s real “hero” (or titular character). There’s a reason Drew Barrymore’s role in Scream is still so memorable all these years later, and that’s because the filmmakers/screenwriters took a risk in showing the audience somebody and making us comfortable with them, only to pull the rug out from underneath. Meanwhile, Ted’s running commentary on the overcrowded prison system forcing him to have to share space with some of the world’s most brutal homicidal maniacs was quintessential dark comedy. Ted Connelly, we hardly knew ye, and yet, I thank you for your pitiful existence. 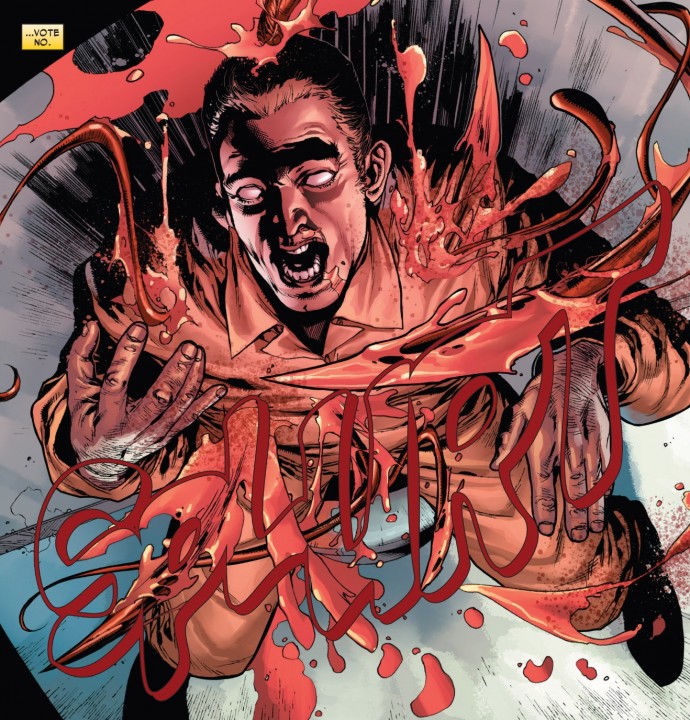 But putting aside the great intro, where I needed the story to deliver for me was how Shinick and Segova were going to use Carnage once they found a way to bring Cletus back from his vegetative state. What I found so tired about Carnage USA was the fact that the storyline was basically “Maximum Carnage rural style!” Just as it was preposterous for Carnage to make his first comeback after getting ripped in half in space by the Sentry, it seemed doubly preposterous that the guy would be able to take-over an entire community of people and cause havoc again in a fashion that would take up five issues of comic book space. We get it – Carnage is evil and psychotic and has a blood lust unlike any other character in the Marvel Universe. Can we please do something new with him?

Enter the Wizard and his plan to reform the Frightful Four, a classic Stan Lee/Jack Kirby-era villain stable that has mostly consisted of some “B” and “C” level villains like Sandman, Hydo-Man, Titania and of course, the mind-controlling Wizard. Are these classic, all-time great bad guys? No, not at all. But they have the potential to make the story I’m reading fun. 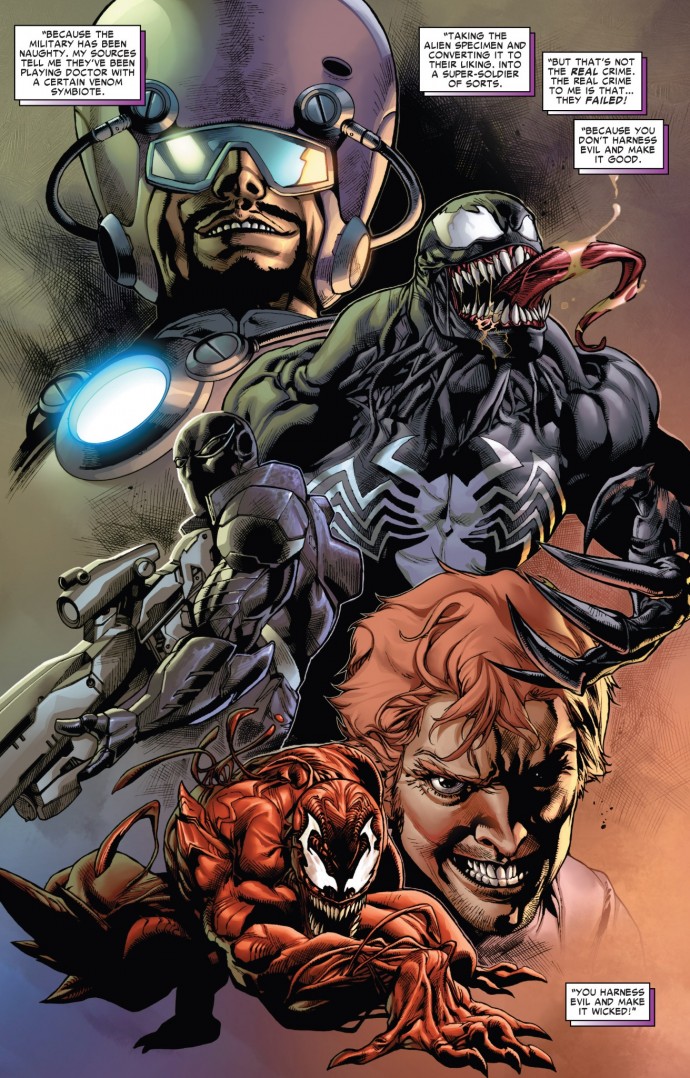 The Wizard’s plan is also a totally acceptable way to explain Carnage’s return. When I first read that Marvel was launching another Carnage mini this summer, I questioned how they were going to deal with Cletus’ brutal ending during Minimum Carnage, where Kaine left him not quite dead, but not quite living. So Shinick brings a master of mind-control to the party to take over whatever is left of Cletus’ brain and revive the Carnage symbiote. And just in case the Wizard isn’t powerful enough to tame the beast that is Carnage, here’s a legitimately surprising appearance by Klaw, who is made of sound and can control sonic soundwaves (one of Carnage’s big weaknesses) to keep the symbiote in check. Now the story transitions to how the Wizard and Klaw keep Carnage under wraps long enough so that he becomes an asset to their master plans, while also introducing a fourth member to the team, who at this rate, could be anyone (or it could be an old team-member with a fresh coat of paint). 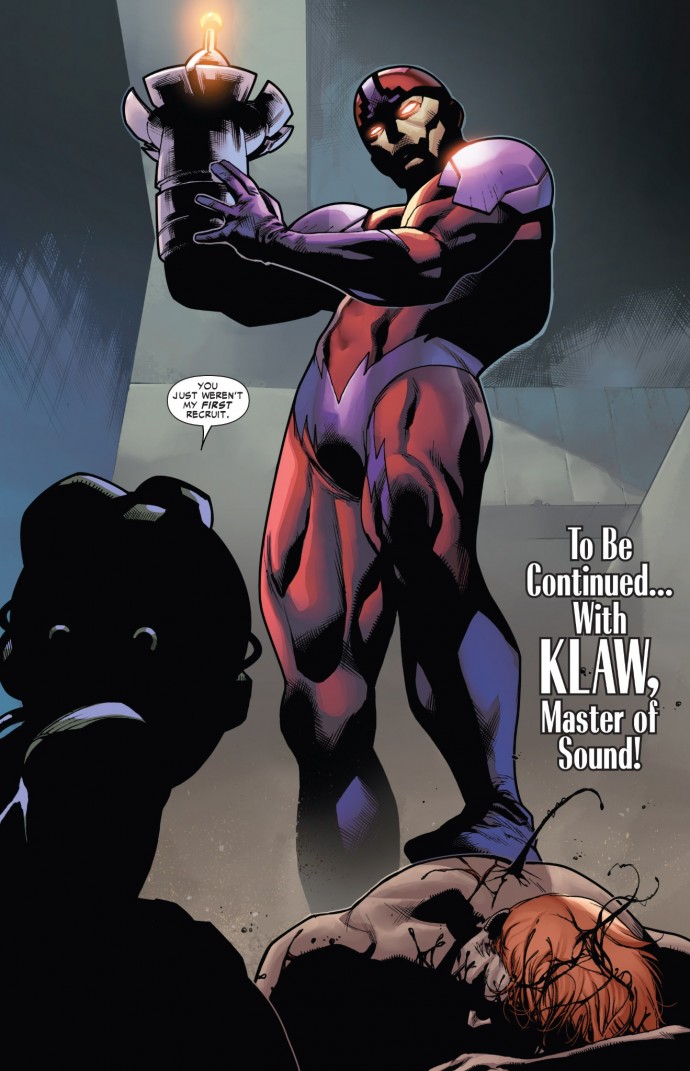 I cannot heap enough praise on Segova’s artwork in this issue. There’s a stylized aesthetic to it that still feels like a comic book while also projecting an aura of darkness that is apropos for Carnage stories. A lot of people fawned over Clayton Crain’s art in the last two Carnage mini’s, but there was just something a bit off-putting about his interpretations of the characters that didn’t sit right with me. Again, I had huge issues with the tone of the last two Carnage mini’s – it felt a little too snuff-film-by-way-of-comic-book for me. A lot of that was chalked up to how Zeb Wells wrote the two series, but Crain’s artwork contributed as well. 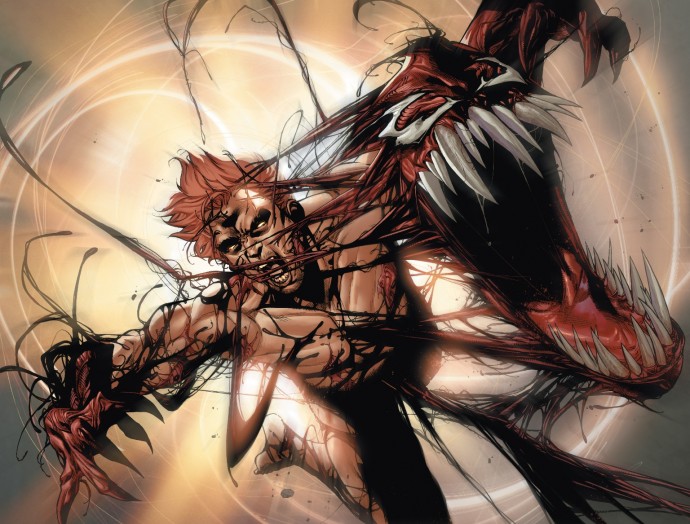 So, here we are Carnage, the dawn of a new era. Here’s a write-up about one of your new comic books and I’m actually a big fan of what I just read. Combined with the fact that a Carnage vs. Superior Spider-Man match-up is totally fresh (and we can finally just move past the “Peter is having a moral dilemma” storyline that gets shoehorned into every Carnage arc) and we have the makings for a special little mini-series here. Color me surprised, but most importantly, keep the good stuff coming.