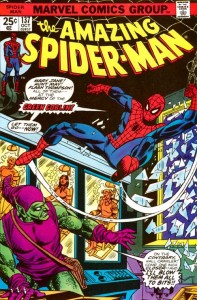 As I mentioned in my post about Amazing Spider-Man #136 last week, part of what made Harry Osborn as the second Green Goblin such a captivating character was his unique relationship to the man underneath the Spider-Man mask, Peter Parker. While Spidey has had personal connections to villains (in their civilian identities) in the past, like the Lizard/Curt Connors, and the original Goblin, Norman Osborn (Harry’s father), neither of these characters were as close to Peter as Harry. Harry was Peter’s roommate, classmate and as noted multiple times in ASM history (and sold hard in this two part “Return of the Green Goblin” arc), his best friend. When Harry shows up wearing the costume of Spidey’s mortal enemy, there are some real questions as to how Peter is going to handle this confrontation.

ASM #137 fleshes out the Spider-Man/Harry Goblin dynamic in some interesting ways. The duo’s initial battle in ASM #136 seemed like a tune-up – Peter pulled his punches and once Harry got the upper hand on Spider-Man and sets him up for the kill, one of his glove zappers malfunctions and he takes off. ASM #137 shows Spider-Man on the aggressive. He wants to get to Harry before he has the opportunity to don the Goblin costume and attack again. But there are still questions about what Peter is going to do to Harry once he finds him. 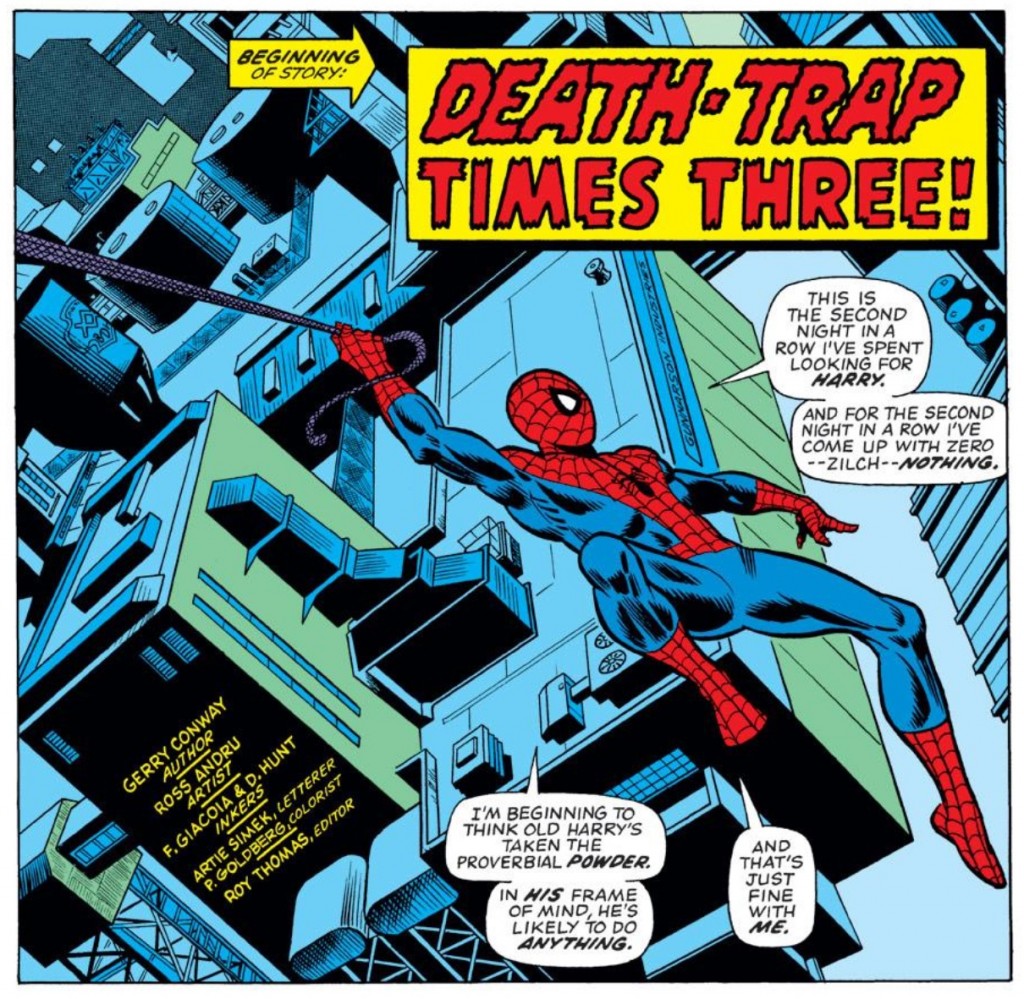 Something that strikes me about Gerry Conway’s script here is how, even when both characters are in full costume, Spider-Man addresses the Goblin as “Harry.” Typically, Spider-Man has some kind of derogatory nickname for the members of his rogue’s gallery – Gobby, Doc Ock, a countless number of “fatso” names for Kingpin – which has always been utilized by writers to keep the tone of the story, and the Spidey character, light. While the character’s juvenile sense of humor was a major contributor for why I fell in love with Spider-Man comics as a kid, I have longed questioned if the overuse of these diminutives inadvertently sucks some of the drama and intrigue out of a confrontation. In other words, if Spider-Man isn’t taking things seriously, why should I as a reader buy into the threat of this villain?

Instead, the consistent use of “Harry” has many layers of meaning and is one of the little details that elevate this arc into one of the Bronze Age’s better Spidey stories. For one, it makes this showdown between Spider-Man and Green Goblin even more personal than it was when Harry’s father was under the mask (and the personal angle is furthered when, like Norman, Harry chooses to attack Spider-Man by attacking Peter and kidnapping Aunt May, Mary Jane and Flash Thompson and threatening to blow up “the person most dear to you” with a bomb). The device really drives home the point that these two characters know each other intimately. And when Spider-Man is fending off attack after attack by the Green Goblin, it makes the reader wonder how he’s going to subdue a character he continues to acknowledge as his friend and not as a super-powered enemy. Because of this dynamic, it adds a level of seriousness that is otherwise missing in the bulk of Spidey’s other physical encounters during the Bronze Age (unless you were honestly on the edge of your seat when Spider-Man was taunting Big Wheel as “Wheelie”). 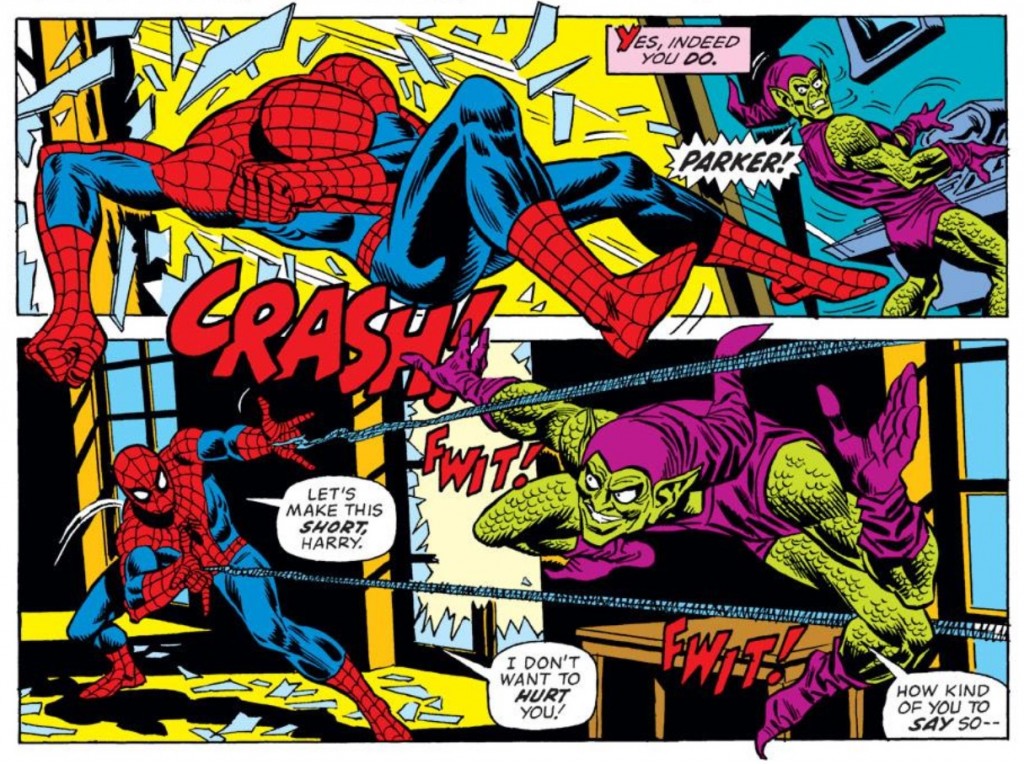 Additionally, the use of “Harry” also demonstrates Peter’s inability to accept how his best friend has slipped towards insanity. In both of these issues, Spidey reminds Harry that he’s not like his father, but he risks following in the footsteps of Norman if he continues with his criminal behavior. Peter’s denial leads to a misstep in ASM #136 which almost gets him killed. And it leaves Spidey unguarded enough in ASM #137 that it provides Harry with an opening to kidnap May, MJ and Flash and set up the drama of this issue. Ever since the dramatic reveal at the end of Amazing Fantasy #15, Spider-Man is a character that is built around Peter’s realistic (and relatable) character flaws. While Peter is fortunately able to save the day in this issue (in one of the only sequences of ASM #137 that I thought was incredibly trite – Peter has only six minutes to locate and save May and he somehow manages to make a pit stop en route and refill his web shooters), it would have been a totally fitting “Parker luck” moment if his inability to accept Harry’s insanity led to another dead family member. 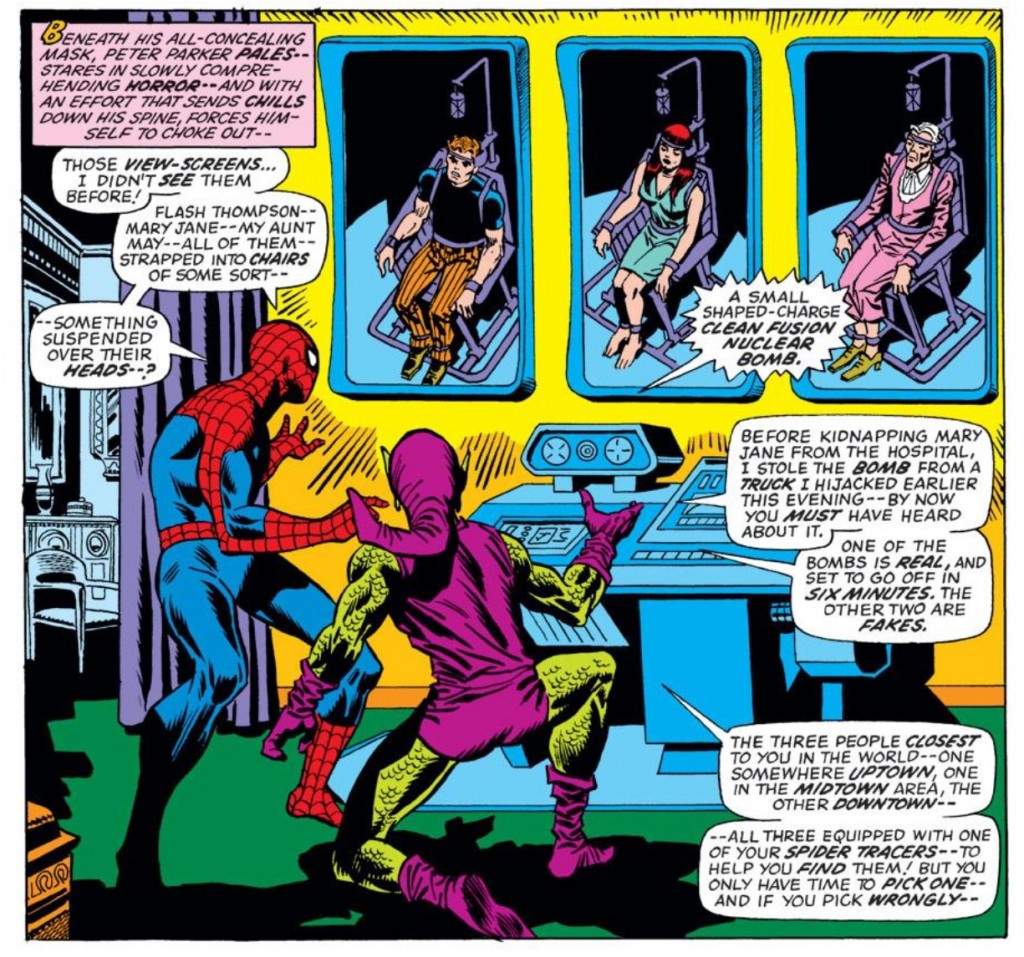 But beyond the “denial” factor, I also can’t overlook how Peter calls the Goblin “Harry” as a bit of gamesmanship. By assuming the identity of the Green Goblin, Harry is trying desperately to succeed where his father had failed – to defeat Spider-Man and destroy Peter Parker for all of the grief and pain he caused. In many ways, Peter is just trying to get inside Harry’s head, just as he does when he mocks Kingpin’s or Doc Ock’s weight, but Spidey’s mind games come across as much more sophisticated in ASM #137. And in the end, Harry proves to be an inferior version of the Green Goblin. He fails to trick Peter into killing one of his loved ones/Flash and then gets tripped up on his glider by Spidey’s webbing – a trick even his father wasn’t falling for in his Goblin-gliding days. 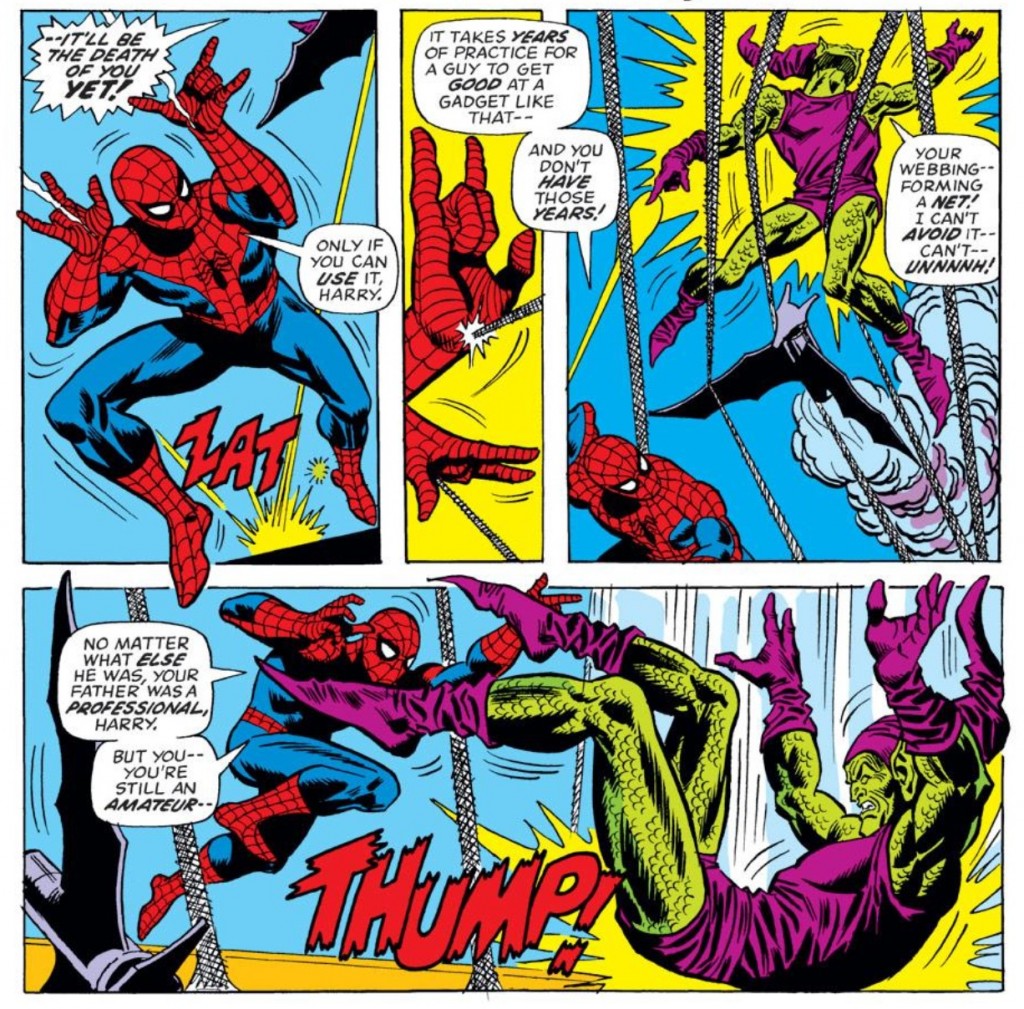 It all ties back to the personal angle again – as civilians Peter was superior to Harry in every way: he’s always been presented as more intelligent; he had the functional relationship with Gwen while Harry was trying to get a grasp on the swinging MJ (and then to rub some real salt in the wound, Peter ends up with MJ after Gwen dies); and he has a loving relationship with his surviving family (Norman was always portrayed as a cold creep to his son). The fact that Peter proves superior in costumed form drives Harry even more insane, which interestingly enough ends up saving Peter at the end when a deranged Harry tells the cops that his “best friend” is Spider-Man and the incredulous officers take Osborn away to go get some professional help. 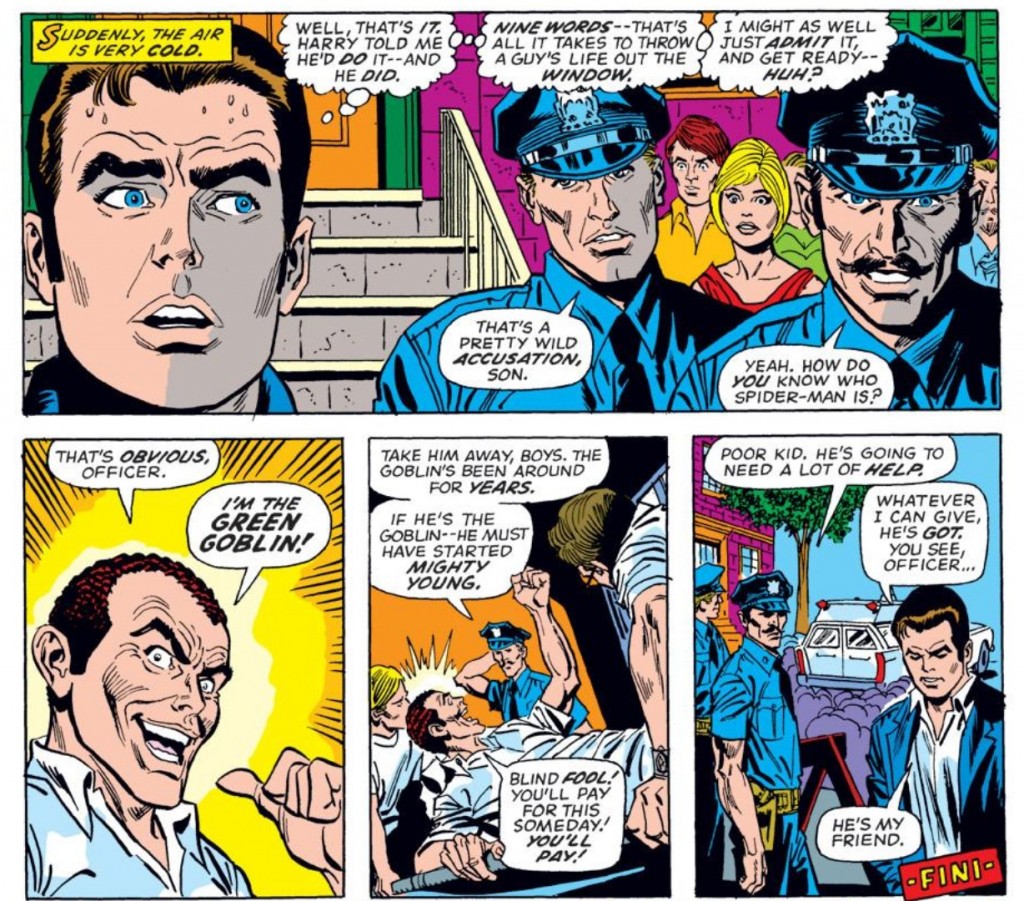 It’s one of the few times in this issue where an otherwise serious moment (Peter finally having his cover blown) gets turned on its ear in a way that provides levity for the arc. Conway provides a well-earned chuckle after crafting one of the more personal stories in Spider-Man history. Of course the best Spider-Man/Goblin Harry stories would come courtesy of J.M. DeMatteis, but Conway obviously laid the groundwork with comics like ASM #136-137.

This is the second part of the “Green Goblin Lives Again” arc. Click here for part one.