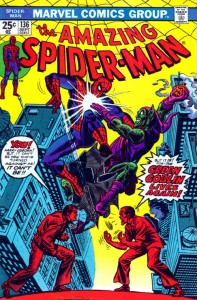 I never found a way to be successful at that whole comic book speculator thing. That’s part of the reason why I chose to dedicate my collection to only one title, Amazing Spider-Man, because otherwise I would probably make one bad investment after another, chasing after fool’s gold and obtaining comics that I had no emotional attachment to that would inevitably fill up my house and bury me under their weight of worthlessness.

I sometimes wonder if that’s my ultimate fate anyway.

Regardless, years after mistakenly thinking grabbing extra copies of gimmicked early 90s issues of ASM could one day be resold for a pretty profit, I decided to play a similarly themed game with the Bronze Age classic ASM #136, which of course marks the return of one of Spider-Man’s arch-villains, the Green Goblin (this time it’s Harry Osborn, Peter Parker’s best friend and the son of the original Goblin, under the mask).

After seeing Sam Raimi’s Spider-Man 2 movie in 2004, I thought it was abundantly clear that the Harry Osborn Green Goblin was being set up as Spider-Man 3’s featured bad guy. Because of my prediction, I figured the demand for Harry’s first appearance as the Green Goblin would skyrocket around the time the third movie was released, so I jumped on eBay and got myself a nice but affordable copy of the comic. Then, all I needed to do was sit and wait to be proven right about the movie and from there, I could make a decision about keeping the comic and bragging to people about how I struck way before the iron was hot and paid next to nothing for it, or I could sell it as a way to finance other comic book purchases (I guess where my logic really goes askew here is the fact that I would have then been without a copy of ASM #136 and I would eventually have to buy again if I was ever going to complete a run of the series). 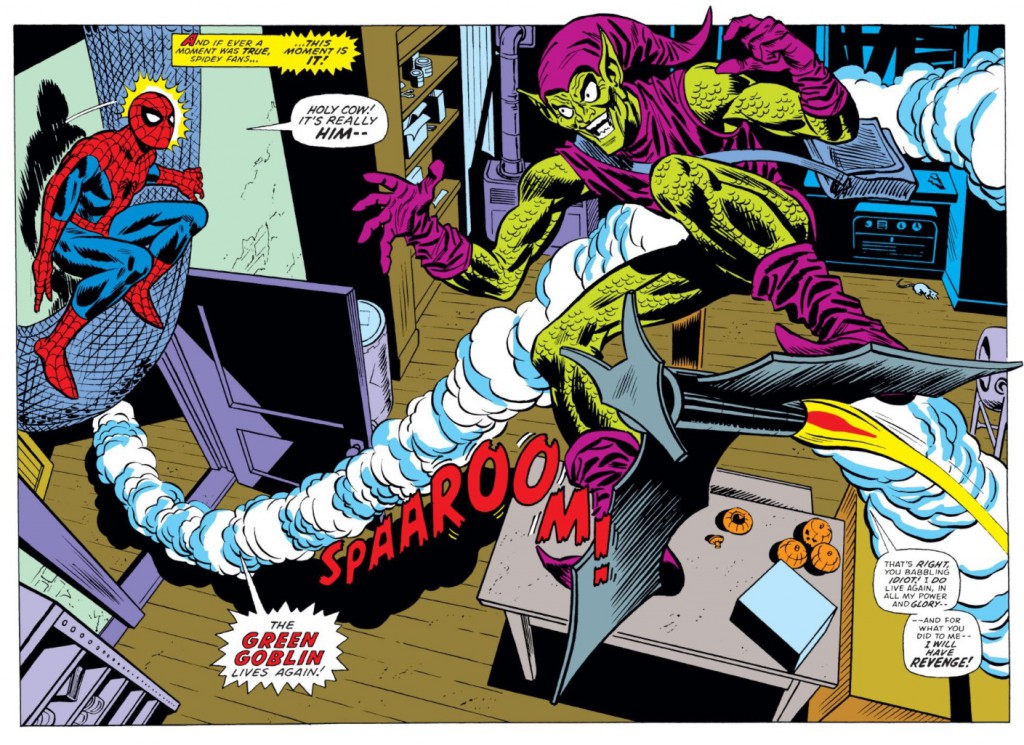 Needless to say, while the comic is not a worthless piece of junk like some of the hologram and variant cover issues of the 90s, I never got the impression that the movie had any impact on ASM #136’s value. For one thing, Green Goblin II was one of three villains in an overstuffed movie that failed to live up to the critical and commercial expectations of its predecessors. But even if Spider-Man 3 was revered by fans and critics, I still doubt ASM #136 would have become a collectible on par with even some of the issues that immediately preceded it in the series (like ASM #129, the first Punisher, and ASM #121, the Death of Gwen Stacy). As a collectible it’s easy enough to find and just not significant enough in the title’s overall history to have warranted special attention from me nine years ago.

Still, ASM #136 has the rare distinction of being a part of one of the few arcs I actually quite enjoy from Spider-Man’s Bronze Age-era library. I’ve long felt that once Gerry Conway killed off Gwen, the series more or less meandered for about 100 issues before Roger Stern took over on scripting duties. The Len Wein script/Ross Andru pencils era is notoriously awful (in my opinion), filled with unmemorable villains and inconsequential situations for Spider-Man (though that run is also responsible for developing Peter and Mary Jane some more, the marriage of Ned Leeds/Betty Brant and Harry/Liz Allen, and some other interesting character choices among the supporting cast). But I can’t say I truly “love” any of the comics from this era. ASM #136 is one that I can at least say that I like.

What I’ve always found striking about this story is how the reveal of the new Goblin’s identity is handled in completely opposite fashion compared to the long-term aura mystery behind Norman Osborn’s Goblin during the Stan Lee/Steve Ditko, later John Romita Sr., run. In the Green Goblin’s very first appearance (ASM #14), the reader is told that the identity of this new masked villain was a huge secret, and subsequent Goblin stories would keep teasing this mystery. In ASM #17, there’s even a scene where the Goblin is on the streets in his civilian identity and Spider-Man’s spidey sense goes off, but because he’s never met the man under the mask before, Peter has no clue as to what could be causing such an alarm to his senses.

After his father is killed in ASM #122, Harry’s downward spiral is obvious, and Conway lets the reader know without any doubt that it’s just a matter of time before he follows in Norman’s footsteps and assumes the Goblin identity. But outside of witnessing some erratic behavior, Peter is not necessarily in the know. So when a bomb goes off at his and Harry’s apartment, hurting MJ in the process, Peter knows this has to be the work of the Goblin. He says he has an inkling as to how might be the Goblin here, but he doesn’t want to believe it. So he stakes the villain out at Norman’s abandoned warehouse and as expected, the Goblin eventually appears. The smoke hasn’t even cleared from the first pumpkin bomb when Peter calls Harry out for the charade, warning him not to become a murderer like his father. 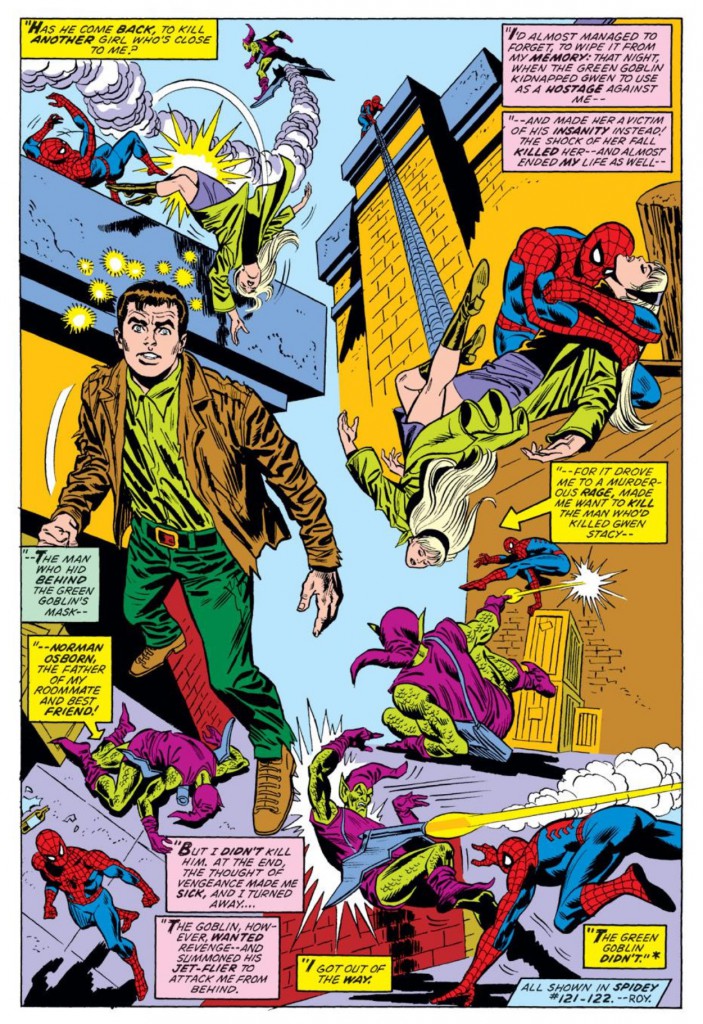 There would be better Harry/Goblin stories down the line, but I’ve always appreciated how ASM #136 immediately introduces the potential drama that comes with Peter’s roommate and best friend assuming the identity of one of his mortal enemies. Norman was the very first villain to discover Spider-Man’s secret identity, and that information ended up causing the death of the innocent Gwen. But Peter had no other relationship with Norman outside of the fact that he was his roommate’s father. Peter and Harry attended classes together, hung out with the same people, and shared close quarters with each other in a New York City apartment. At the time ASM #136 was published, Peter was starting to develop a romantic relationship with Mary Jane, who was dating Harry earlier in the series. While no creative team scoured the Harry/Peter relationship as closely as they could have, it was still very much implied that these two were close and liked each other. And now because of Harry’s inability to cope with the death of his criminal father, he had become not only the sworn enemy of Spider-Man’s, but of Peter’s.

One of the most ominous sequences in this issue is when Harry tells Peter that Spider-Man is dead no matter what – he’s either going to physically kill him, or out his secret identity to the world and destroy Peter’s life. Not even Norman (to that point) had quite that amount of potential power to wield over Peter. Because Harry felt so strongly betrayed by Peter, he is willing to burn the entire forest down around everyone to exact his revenge and take down everyone in Parker’s life either physically or “spiritually.” Norman obviously attacked Peter personally when he killed Gwen Stacy, but I was always under the impression that Norman’s fixation was with destroying Spider-Man. Harry was the first adversary to be hell bent on destroying Peter Parker. 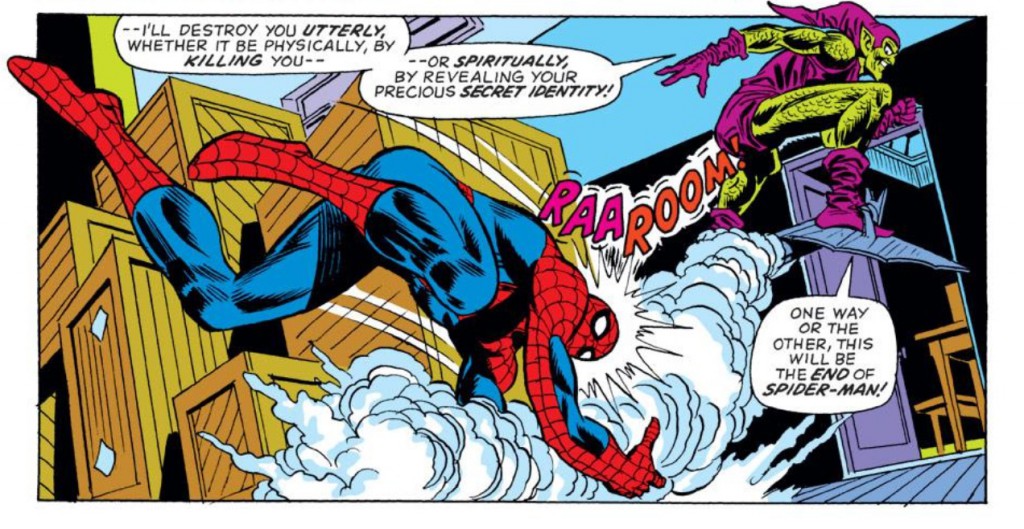 Similar to how the Green Goblin was first introduced in 1964, the new Harry Goblin is presented as being a critically important character in Spider-Man’s universe. And I’ve always felt that beat was successfully executed by Conway and Andru. ASM #136 continues the legacy of the Green Goblin that would grow to the point where the character would be considered by many to be Peter’s true arch-nemesis. While the pendulum may be shifting back to Doctor Octopus these days, such a topic wouldn’t have been even up for debate if Marvel had picked just some ordinary schmoe (or perhaps Harry’s psychiatrist) to be the Goblin reincarnate.

This article is part one of the “Green Goblin Lives Again” arc. Part two will be posted next week.