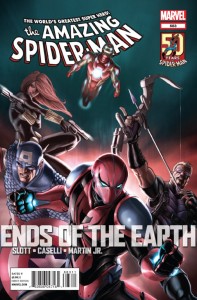 Amazing Spider-Man #683, the second part of the Ends of the Earth storyline, left me with two totally separate impressions. So, while I usually try to put together one broad “thematic” post that sums up the issue each time out, I have to apologize in advance in my thoughts come across a little disjointed this time around.

As for impression number one – as I mentioned regarding ASM’s recent use of time travel for storyline, my suspension of disbelief has weird and funny triggers when it comes to my comic book reading. So with that in mind, I can’t eloquently explain why but I had a very difficult time with the use of real-life political figures in ASM #683. It’s just something – outside of the Obama inauguration issue a few years back, of course – that has usually been avoided in Spider-Man. And if it has been used, it’s always felt more like a throw-away line than a substantial part of the plot (a quick Google of Ronald Reagan and Spider-Man for example shows that the Gipper is “mentioned” in ASM #158). Historically speaking, comic books that have used active or recently active political figures in their plotlines have done so explicitly support the plot and themes of the story. How can one talk about Frank Miller’s, The Dark Knight Returns series and not understand why it had to be Reagan that set Superman out to subdue Batman? In that case, you had a political figure who through rhetoric and actions came to emblemize the rebirth of “America” as in, America, the superpower, aligning himself with the ultimate American Icon in Superman (not to mention, the ultimate representation of America’s power). The use of Reagan there really advances the story. 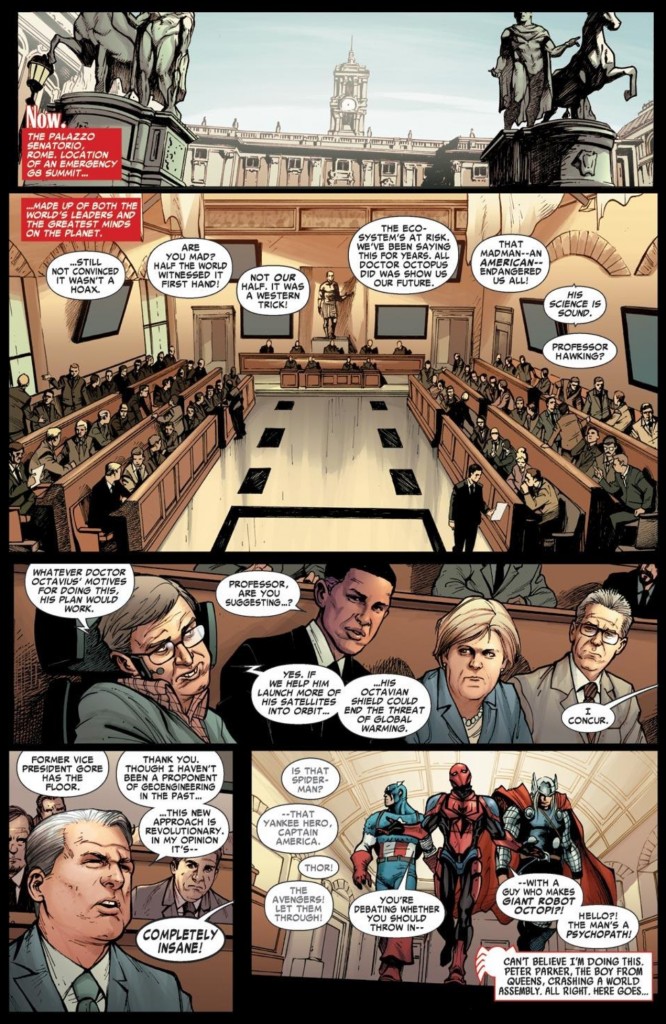 Ditto for Alan Moore’s use of Richard Nixon throughout his iconic Watchmen series. In that case, you have one of the most notorious paranoid politicians in American history, inserted as the political catalyst to Doomsday in a story that’s all about misdirection and paranoia. Contrast the dark cloud surrounding Nixon with Reagan’s “Morning in America” optimism, and again, you have a politician that is essential to the telling of the story. 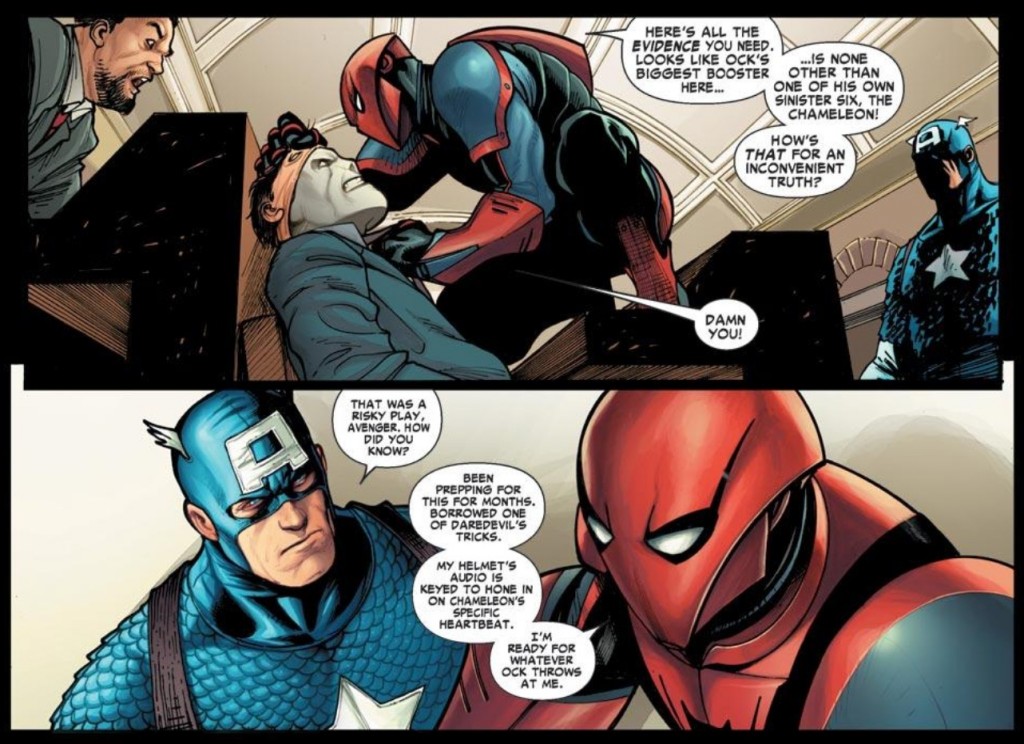 I didn’t quite get that feeling of political necessity in ASM #683, and considering how rarely Marvel has gone there in its Spider-Man comics in the past, it felt jarring that they went there now. I understand that the stakes for the world are incredibly high in Ends of the Earth, considering the storyline deals with a potential solution for global warming in the form of Doctor Ocotpus. But in this universe that otherwise focuses on fictional political figures like J. Jonah Jameson as the Mayor of New York City, did we really need a scene in the UN featuring Barack Obama and Al Gore (or the Chameleon impersonating Al Gore)? Gore makes a little more sense in that despite being the second most powerful person in the world for eight years, he’s became an even larger figure for his work in bringing awareness to the dangers of global warming. But where does Obama fit into all this? Maybe if Dock Ock was attacking the world’s health care system or something, I get it, but it just seems like a “real person” cameo for the sake of doing it, and it took me out of the story when I first saw it. 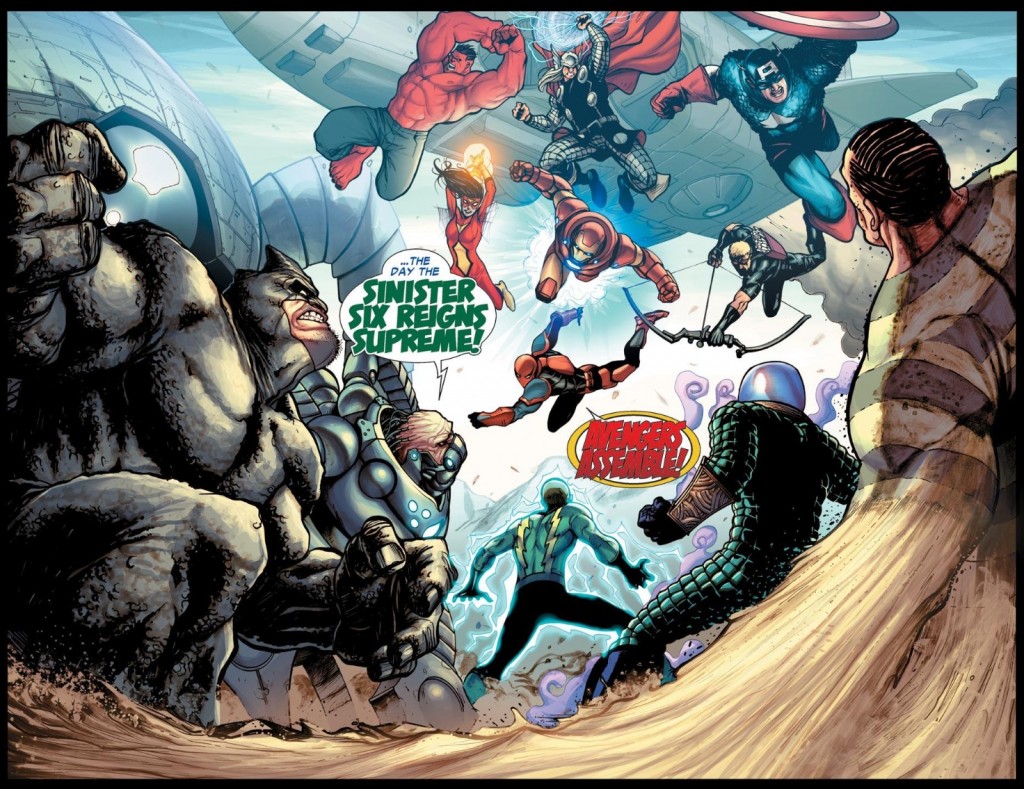 On the positive side, what I really enjoyed about this issue is how Dan Slott is setting the Sinister Six to be a true physical threat to the superhero community. After they outsmarted and outfoxed M.O.D.O.K. and his crew a few issues earlier, it was good to see a rather cocky Avengers team try to take down the Six and come out unsuccessful. If we are to believe that the Sinister Six are truly a threat to all of humanity, they need to come out the winner in some of these physical confrontations with Spider-Man and the Avengers. It’s always bothered me that in earlier Sinister Six storylines, Spidey has been able to defeat the group single-handedly. The whole reason this group is allegedly a threat is because they are Spidey’s six deadliest foes united in a common cause to defeat him. In Marvel’s first Sinister Six story in Annual #1, Spidey actually refuses the help of other heroes. The last scene of ASM #683 – Spider-Man on his knees before Doc Ock and the rest of the Avengers battered and beaten – was a powerful way to sell the next issue of Amazing Spider-Man. Now if we could have just eliminated that scene in the UN… 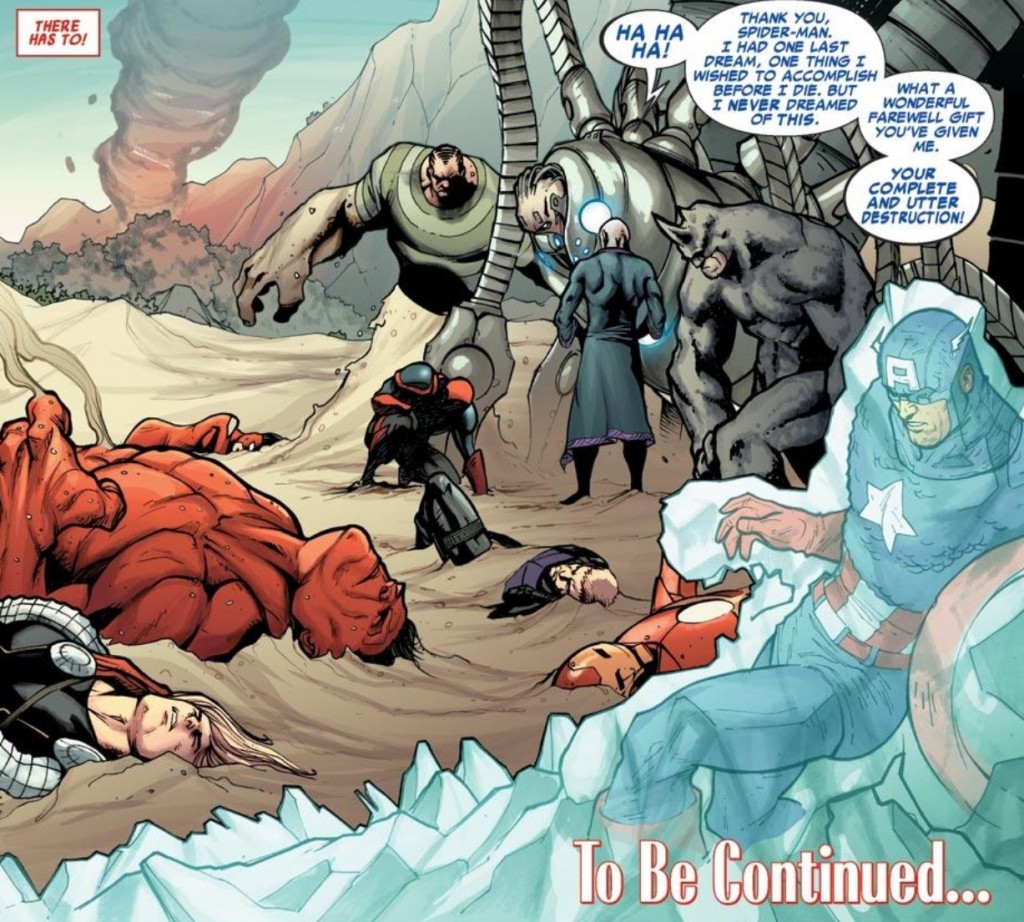