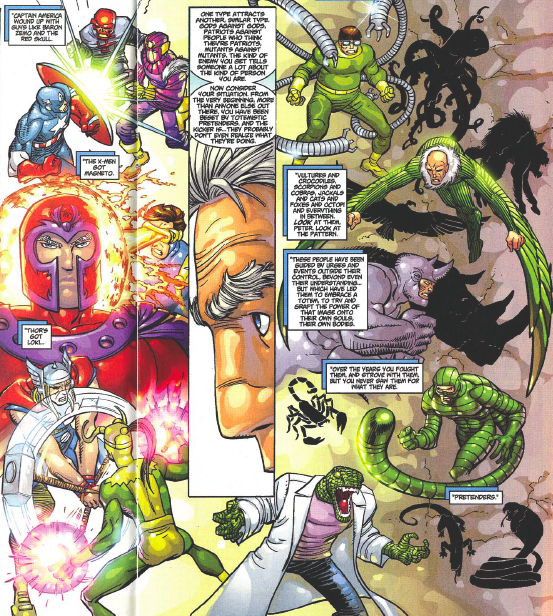 I know I’m milking this “who’s the Spider-Man’s greatest villain” debate for all its worth, but I’m going to dedicate at least one more post to it because I believe last week’s rant regarding Green Goblin vs. Doctor Octopus elicited some really interesting reader comments and while re-reading J. Michael Straczynski’s “Spider-Totem” arc from the early 2000s, I came across the above panel in ASM #31 (volume two) that’s sparked some more thoughts on the topic.

For those unfamiliar with the storyline, during the “Spider-Totem” arc, Spider-Man meets a mysterious man named Ezekiel who has the same powers as Spidey. Ezekiel poses the ultimate “chicken or egg” question with Peter: He asks whether the radioactive spider which bit him gained those powers through radiation, or if the spider already had those powers and transferred them to Peter before the radiation killed it.

What I love so much about this panel is it beautifully sums up the relationship between heroes and villains in the Marvel universe:

One type attracts another, similar type. Gods against Gods. Patriots against people who think they’re patriots. Mutants against mutants. The kind of enemy you get tells someone a lot about the kind of person you are.

The analogy I use a lot around here is Ying and Yang – like two sides of a coin, or darkness and light. The greatest villains in the Marvel universe are actually quite similar in most ways to their superhero equivalents. But there are just a few subtle differences that push a villain to the side of evil.

Going with the “Spider-Totem” concept here, because Spider-Man theoretically had his power transferred to him through an actual spider, his greatest rivals should be those that theoretically had their powers transferred to them by creatures who are adversarial towards spiders. So we’re thinking lizards, birds and scorpions, for starters. It just so happens that Spider-Man has some villains that go by the Vulture, the Lizard and the Scorpion. The Vulture gets points for longevity, but never really came across as a physical threat to Spider-Man. The Scorpion is first introduced as a physical threat, but not an intellectual rival and Spider-Man still finds a way to defeat him in his debut issue (ASM #20). The Lizard is a very interesting candidate in that he’s a powerful adversary and because in his human form, Dr. Curt Connors, he’s a brilliant scientist. But whereas Peter can channel his totem powers and maintain his humanity, the Lizard loses control and becomes an actual animal. But that almost disqualifies him from the archi-villain list in my mind, because when Connors becomes the Lizard, his no longer a human with lizard-like powers, he’s really a human-sized lizard. He’s too drastically different to be Yang to Spidey’s Ying. They’re not two sides of the same coin. They’re different currencies.

Which breaks us to Doctor Octopus. Some of the comments I received last week talk about the physical similarities between Spidey and Doc: they’re both based on eight-legged creatues, and they’re both scientific geniuses, though Peter uses his brain and power for good (the responsible choice), and Doc instead uses his gifts to try and gain great power and control. Talking strictly from an animal vs. animal perspective, octopuses and spiders are not necessarily adversarial, but as two human beings who embody these characteristics, there is great symmetry between Doc and Spidey.

But what about the Green Goblin? Unless you believe in mythical creatures, the Goblin is not based on any kind of animal – which makes his omission from Ezekiel’s spiel both glaring and convenient. Whereas Ezekiel is able to link Captain America with the Red Skull, Magneto with the X-men and Loki with Thor very easily based on their symmetry, he ignores the villain who has caused Spider-Man more pain than perhaps any other villain.

And there are some interesting symmetry’s between Spider-Man and Goblin. Both are science enthusiasts. Both have enhanced strength and speed from chemical means. Both even know each other’s secret identities. But where the paths diverge comes from Peter’s sense of humanity. When Peter loses his Uncle Ben because he didn’t stop a burglar when he had the chance as Spider-Man, Peter’s innate humility leads him to the role of protector. The Goblin/Norman Osborn, is naturally a paranoid and distrustful person. So instead of becoming more grounded when he receives his powerful gifts, Osborn becomes more irrational, donning the mask of a childhood boogeyman while seeking more power in New York’s criminal underworld.

So using Ezekiel’s logic, is there a clear winner to this debate? Of course, not. But if I disregard specific storylines like the Clone Saga and the Death of Gwen Stacy, and just try to come to a conclusion using the physical attributes and profiles of Spidey’s greatest villains, I’m starting to lean more towards Doc Ock as the greatest rival. Spidey and Ock are similar both from a physical standpoint, and intellectually, yet their differences are more simplified – one uses their power for good, the other for evil. Goblin and Spidey have some similarities but their emotional and intellectual differences seem too stark for them to be inextricably linked.