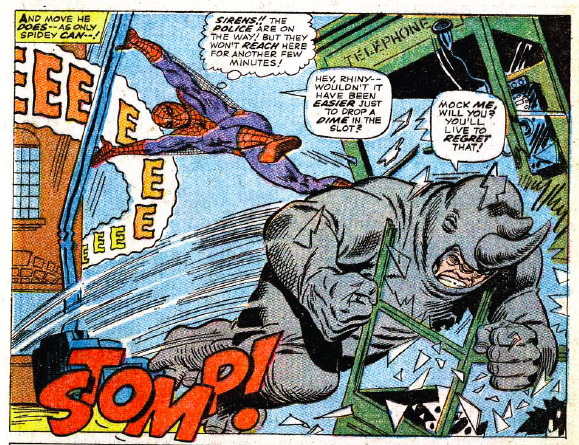 As I continue to focus on the current lineup of the Sinister Six in anticipation of the “Ends of the Earth” storyline, I’m now stuck on trying to come up with something thoughtful and insightful about the Rhino. And perhaps there’s my hook for a post.

Personally speaking, Rhino is a significant character in the Amazing Spider-Man universe only because his first appearance in ASM #41 was the first “first appearance” Silver Age-era comic book I ever purchased. So it’s next to impossible for me to see Rhino in a comic book today and not think back to that day at the comic book show when I walked out with what I deemed my collection’s first “key” issue. But ask me to think about significant storylines involving Rhino and I’m at a loss. True Spider-Man nerds may note that Rhino’s first and second appearances bookend the issue that officially introduces Mary Jane Watson to the Marvel universe, but does that add to Rhino’s legacy? I guess he gets kudos for interrupting Peter and MJ’s first-ever get-together.

But in action, Rhino is a very poor superhero/supervillain pairing for Spider-Man. Going back to the oft-discussed “Spider Totem” storyline in the early 2000s, the character Ezekial tells Spider-Man that the pairing of heroes and villains is not happenstance. There is a Ying/Yang quality whereas the hero and villain essentially support and complement each other, despite the fact that they’re also trying to destroy each other. With that in mind, I’ve always felt the supervillains who combine intellect and scientific knowledge with their physical prowess are the most effective (Doctor Octopus, Green Goblin, Lizard and Mysterio for example). These characters stand in stark contrast of Spider-Man and his “with great power comes responsibility” credo, thereby supporting and complementing each other’s existence (not to get all nihilist but what is “good” without “evil?”). 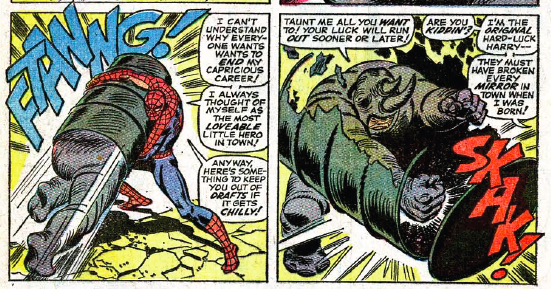 Rhino, at least early Rhino, comes across as your stereotypical all-muscle, no-brains brute, which is why his eventual assimilation in the Incredible Hulk universe makes more sense. While Spider-Man is not the strongest kid on the block, he’s still a lot stronger than your average hero. Combine that attribute with his brain, and a character like Rhino is suddenly a lot less imposing. Throughout his first two major appearances in ASM, Spidey is constantly seen outsmarting Rhino, with comical results to boot. Rhino makes that point that all he has to do is make contact with Spidey once and he’s toast, but that’s a big “if” and the reader never gets the sense that this could be “it” for Spider-Man.

In later appearances, Rhino is even more pitiable. During the Sinister Syndicate storyline in the 1980s, Rhino is portrayed as the sensitive fat kid who is ticked off at the skinny nerd for making fun of him. In fact, just his placement in the Sinister Syndicate says it all – what kind of supergroup is led by the Beetle, and also features “luminaries” like Hydro-Man and Boomerang? Rhino is probably the highest-rated Spidey villain in a group of D-list evil-doers.

So I guess you can put a “check” next to Rhino’s name as yet another head-scratching entry for what is supposed to be a team featuring Spider-Man’s deadliest villains. Even as the current Marvel creative team tries to give Rhino some personality, it’s hard for me to move past the fact that this was the same guy who got stuck in an oil barrel and who told Spider-Man to “don’t make fun of me.”