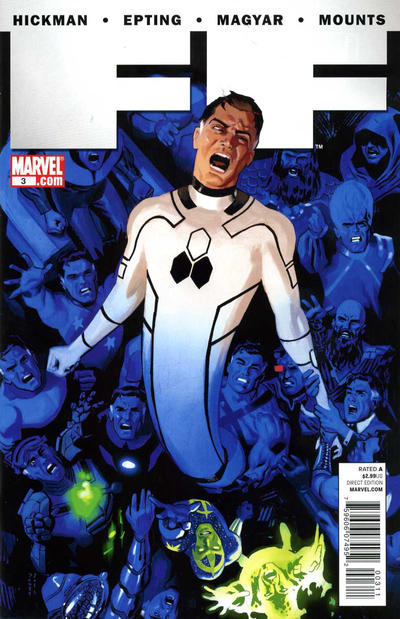 As you might have guessed from the décor around here, Chasing Amazing is a blog about Spider-Man comic books. While I originally intended to keep my focus on this site to the very narrow world of Amazing Spider-Man comics, I’m also a very pragmatic person, so I understood in order to produce a decent amount of content, I was going to have to spread my wings a bit and write about some comics and pop culture happenings that were tied-in to the overall Spider-Man universe and myth. So this included other Marvel series that prominently featured the web-slinger, i.e. the new “FF” (aka, Future Foundation) series with Spider-Man teaming up with the three surviving members of the Fantastic Four.

So after saying all that, I have to admit I’m at a total loss to come up with a semi-intelligent post about FF #3. It’s a very interesting comic, no doubt, but this is unquestionably a Fantastic Four series that has a few glimpses of Spider-Man throughout. In fact, Spider-Man only appears in a few panels of FF #3, to crack a few sarcastic quips at the expense of old school Fantastic Four villain, the Mad Thinker, and then he disappears and the storyline remains fixated on the plethora of Reed Richards from alternative universes running around and causing havoc. There are also brief cameos from some awesome general Marvel universe villains, like Doctor Doom and Galactus, but far too little Spider-Man related information for me to cull for a post – unless you want me to ramble about Spider-Man’s sarcastic wit in one panel (and to be fair, I sometimes find myself chuckling louder at what’s coming out of The Thing’s mouth than Spidey’s, though I’m sure that’s some level of blasphemy). 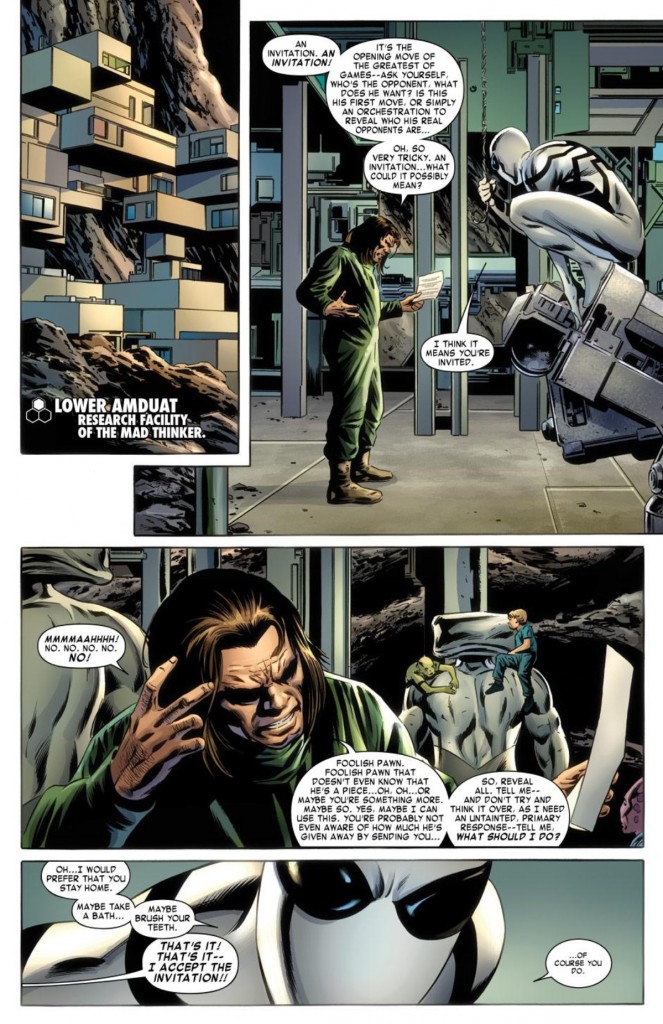 I know I’ve been called out by a few of you for being a bit too narrow-minded when it comes to the general world of Marvel comic books, but I really think I would do a disservice to Fantastic Four fans if I try writing about their favorite comic book series. And I’ve also said on multiple occasions that I want to avoid having Chasing Amazing devolve into a reviewer’s site. There are plenty of bloggers and comic book sites out there that tell you what’s good and what’s bad about a certain comic book and I don’t think I should be throwing my hat into that ring. Instead, I rather focus on how one man/boy/teenager/nerd became so infatuated with a character that he decided to spend the next few decades of his life following and collecting an entire comic book series dedicated to said character.

In other words, what I’m trying to say in multiple long-winded paragraphs is unless you all really REALLY want to hear what I have to say about the series, I’m going to discontinue my posts on FF unless there’s an event or storyline that features Spider-Man in a significant way. As I mentioned earlier, I’m really enjoying FF as a non-Fantastic Four guy, so I’m going to keep receiving those comics until further notice, so I’ll be able to jump in at a moment’s notice. However, I’m also silently grumbling at the fact that Marvel made a big to-do about Spidey joining the Future Foundation and instead relegated him to a very minor role – similar to what they’ve done with some of The Avenger comics (though at least in that case they’re going to dedicate an entire Spider-Man-centric comic to his role in the Avengers, which I’m apt to check out).