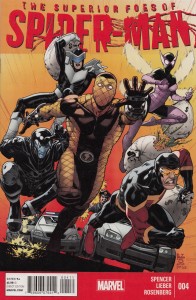 As good as Superior Foes of Spider-Man has been, after reading the fourth issue I now realize that the title is a serious misnomer. There are “foes” (plural) in terms of the existence of the (not quite) Sinister Six, but Superior Foes #4 demonstrates that the unquestionable star and driving force of this series is, and has always been, Fred Myers, aka Boomerang. This comic is HIS story: he’s t he most well fleshed-out character, with the funniest/coolest moments and he always manages to get the last word over his “teammates.” As one of the best and most unique monthly reads currently on my pull list, let me be on the record in saying I have no issues with this comic book essentially being “Superior Boomerang,” but I thought it was worth noting that with every passing issue, I care about less and less about the rest of the foes.

The moment that cinched this epiphany for me came towards the end, as Boomerang soliloquies about this “business of relationships” he engages in, known more simply as “crime.” Of course, the irony of Boomerang’s narration is that he has just tied-up the cowardly Shocker and locked in the trunk of his car, sending him over a bridge and to either his death or a house of pain (since nothing Boomerang ever does seems to work out as he wants, I’m going to guess Shocker survives the plunge).

Shocker’s crime was that he had caught Boomerang in a lie by being at the right place at the wrong time and witnessed Boomerang’s run-in with the Chameleon-turned-Punisher in Superior Foes #2. As readers of the series might remember, Boomerang bragged about his “showdown” with the Punisher to the rest of his “crew” as a means to showcase himself as the undisputed “leader” (because the vast majority of bad guys never live to speak of their confrontations with the Punisher). 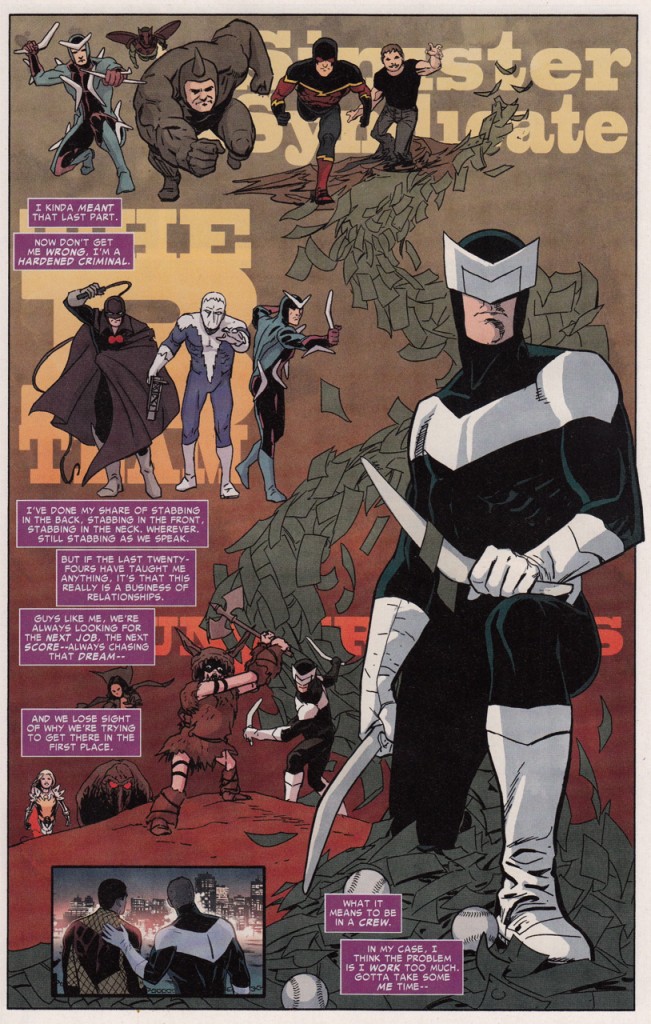 The scene reinforces the idea that the “relationships” in this book are all defined by Boomerang. As the leader of this motley crew of villains, he needs to assert his dominance via any means necessary, whether it’s sending one of his teammates to his potential death, or hiring Luke Cage and Iron Fist to rough up the remaining members of the Sinister Six so Boomerang can play hero and have his “Heisenberg moment” and free them. 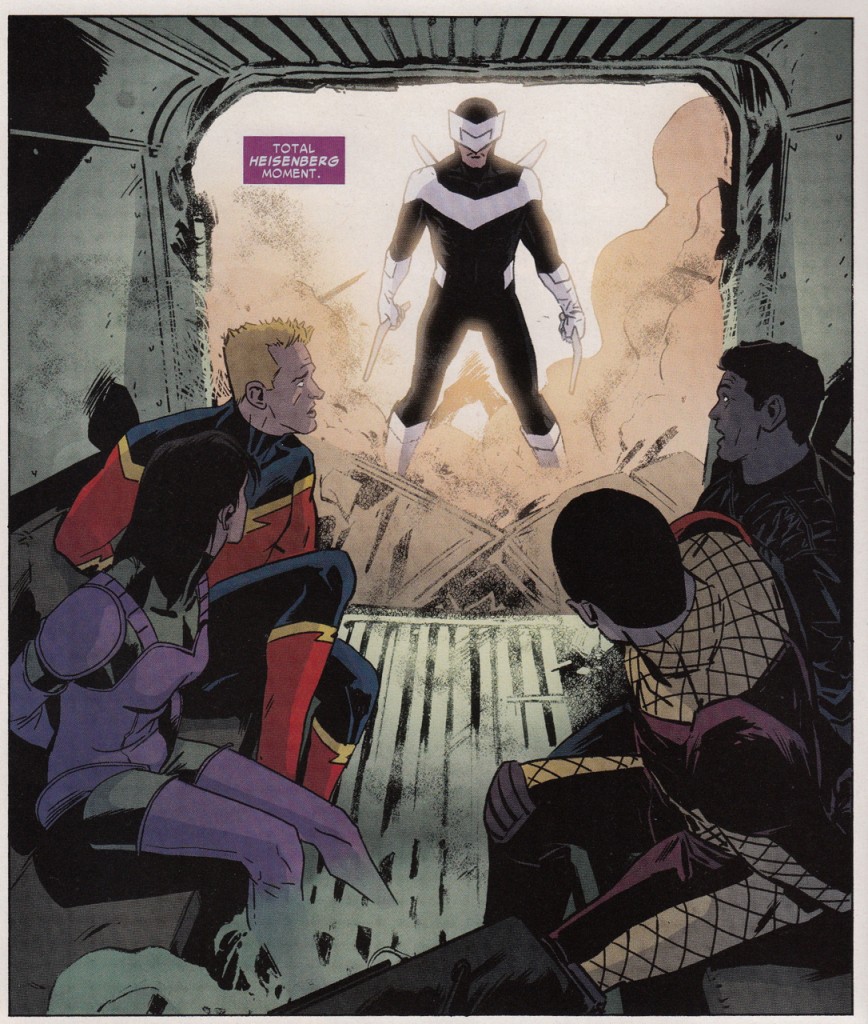 And again, I don’t have a problem with any this. But let’s just be upfront about who the heart and soul of this series actually is. We have a scene in the beginning where Lady Beetle is acting the leader of the Six after they booted Boomerang to the curb in the previous issue, and the rest of the team barely remembers electing her in the first place. When the Sinister Six is confronted by Cage and Iron Fist later in the issue, Beetle isn’t well-versed enough in her criminal leadership technique to explicitly command her goons to attack the two heroes.

I don’t suspect that writer Nick Spencer is intentionally trying to diminish the significance of his supporting cast, but these moments with the Beetle also indirectly demonstrate how flat her characterization has been through four issues. Outside of being the somewhat aloof lone female character that’s always on her smart phone, there hasn’t been a whole lot for the reader to grab onto with the Beetle. Should I be cheering for this character or rooting against her? Should I think she’s being a jerk to her teammates when she talks down to them from her short-term leadership post, or should I believe the tongue-lashing she’s administering is well-deserved? This is all unclear, because thus far (and certainly through the end of this issue), Beetle, and the rest of the supporting cast, only exist as a device to help progress Boomerang’s story. 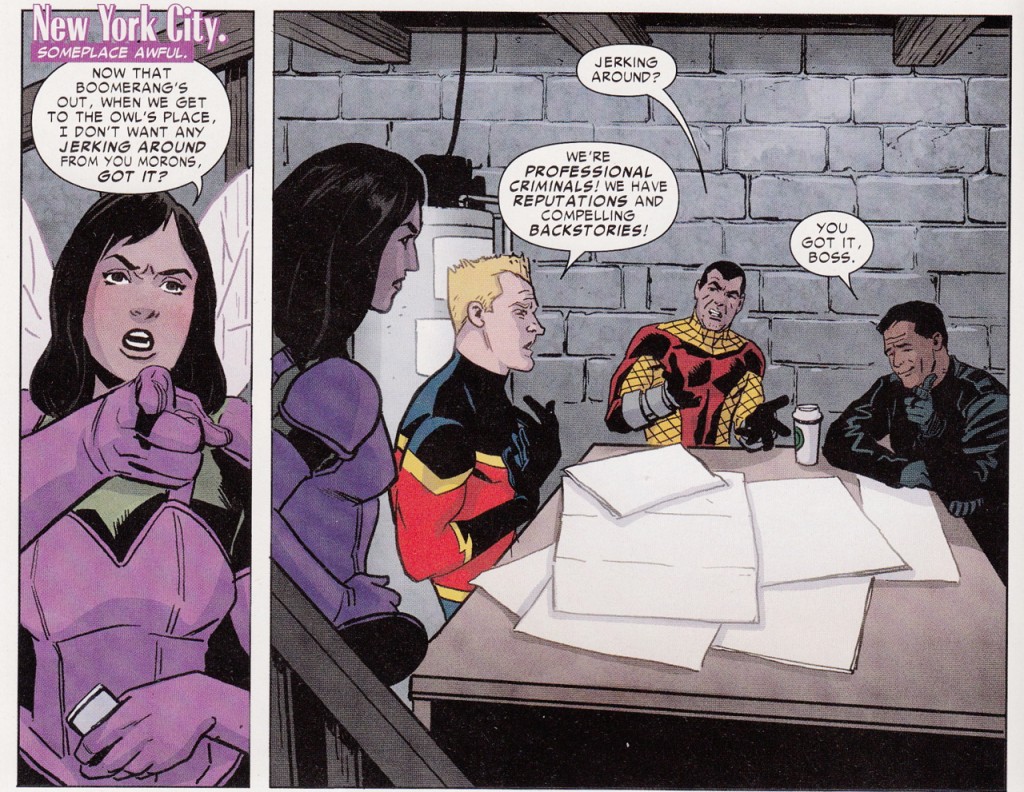 Meanwhile, Boomerang continues to have great character moments throughout the issue. There’s the aforementioned “Heisenberg moment, “ and then in another scene, he meets an ornery female bartender from Philadelphia who remembers the villain’s former career as a banned pitcher for the New York Mets (why do the Mets ALWAYS get picked up in Marvel comics? Sigh …). During his interaction with the female, Boomerang gets to show off both his ignorance and charm, developing some sympathy from the readers, and by issue’s end, the bartender too, who agrees to go out on a date with him despite the fact that he’s acted like a sexist pig in her company.

Spencer’s writing of Boomerang, a career D-lister who – as Steve Lieber aptly illustrates – has been a bit player on an extraordinary number of completely forgettable villain “super” teams, has been a revelation. Regardless, I have to imagine that if Boomerang’s name appeared anywhere near this comic’s title (“The Bumbling Boomerang”), the book would have been rejected flatly by Marvel before it even hit the press (and it would have made Scarlet Spider/Venom’s sales stout by comparison). Hence the “Superior Foes” precursor. That doesn’t mean I’m still not having fun reading this comic, but I’m growing antsy waiting on Spencer to work his magic with the rest of this cast so that it feels like a true “team” book.

Boomerang talks about the “business of relationships” in Superior Foes #4, but a relationship usually requires two or more characters with specific needs and desires they are trying to meet/achieve. Hawkeye – a book that Superior Foes gets compared to a lot – has Hawkgirl and even managed to build an entire issue around a dog. I think I’m at the point with Superior Foes where I want to see Spencer/Lieber dig a little deeper with the rest of our “foes.”  Let’s see Shocker or Overdrive have a “Heisenberg moment.” I’ll even take a “Saul Goodman moment” if I have to.