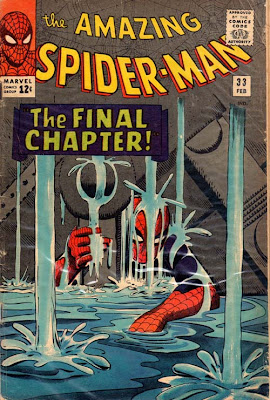 I knocked three more back issues off my Spidey bucket list this month. Not too shabby, though I guess it’s a mild disappointment considering I was getting my hopes up of finding something worthwhile at the warehouse sale earlier this month – I’ll admit, despite having absolutely zero evidence or promise, I still expected to find something in the first 10 issues at a decent price. So, instead, I did my purchasing via the online route, managing to get a super-key issue while staying within my monthly “budget” to boot. That sounds great, though as I’m getting to the tail’s end of my collection here and thinking back to how I acquired past issues (more on those anecdotes to come), clicking on items on a web page and adding them to a digital shopping cart is taking a lot of the joy and suspense out of the hunt.

At least when I’m bidding on something on eBay or some other auction, there’s more interaction in the process (though I almost always either  get outbid or overpay in these do-or-die scenarios). And obviously, when I’m buying them directly from a dealer in-person, there’s a ton of interaction. Instead, I’m just shopping on the amazon.com equivalent for comics, viewing scans and making judgments based on that.
It is always nice to find an online retailer you know and trust and can almost blindly buy from without having to question the integrity of the grading or pricing – which are huge, HUGE advantages for someone collecting on a budget. But, as I have a tendency to repeat around here, there’s also a huge nostalgic element to my  collection based on the fact that the first handful of issues were purchased at a newsstand with a weekly allowance of a $1 from my parents. How is it that at the point where I have the most discretionary income to make these purchases, I’ve become the most emotionally removed from the process?
With the lack of good brick-and-mortar options out there and my overall distaste for the usual price gouging that takes place at conventions and shows, the collecting highlights of my month is when I receive my two new issues every month (Amazing Spider-Man is still an active and ongoing series for Marvel, so while working my way back to #1, I have to keep collecting in ascending order) and when a cardboard mailing box from either postal service or UPS is delivered to me. In those cases, I rip open the cardboard (carefully of course), give the bagged and boarded comic a once over to make sure it’s as described by the merchant, and then put it in another box for storage.Before I go any further in describing myself as some kind of soulless robotic collector, let me get back to this month’s haul. As I alluded to before my rant, I managed to get a good deal on a very important issue in the ASM lexicon. Issue #33 is the third and final installment of the famous “If this be my destiny,” storyline, which many consider to be the artistic highpoint of the early Spider-Man era. While there was always a level of depth to the Peter Parker/Spidey character that helped make him the pop culture phenomena that he is today, this issue really drove home the idea that underneath the red and blue suit, Spider-Man is totally human. And not just any kind of human, but an honest-to-god teenager with rapid-fire emotions. When I look back at some of the earliest issues of ASM, there’s a very cartoony, pulp-fiction element to the dialogue. You see Spider-Man swinging around NYC, a villain is introduced, seems opposing at first, but Spider-Man still emerges on top at the end.
In ASM #33, the issue starts with Spider-Man pinned under thousands of pounds of heavy machinery after a fight-do-death with one of his all-time great enemies, Doctor Octopus. Peter’s Aunt May (and caretaker) is dying (one of many times in the history of the comic), and the serum he needs to save her is just out of reach. While he’s trapped, Peter/Spidey has visions of his Aunt and his Uncle Ben, who is killed in the Spider-Man origin story after Spidey willfully neglects to apprehend a petty thief (you see, the thief goes on to kill Uncle Ben). Spider-Man knows unless he can lift this heavy, impossible load off his back, his Aunt will die in vain, like Uncle Ben before her.
But Spider-Man overcomes the insurmountable odds. Yeah, superheroes almost always find a way to do that, but this time it seemed to matter more. It took every last bit of resolve and strength for Spider-Man to get out alive and save the day. More importantly, it took a level of acceptance that Peter/Spidey had never demonstrated before. Something that’s always been great about the Spider-Man character is how unwilling of hero he’s always been. He initially donned the costume to win some cash as an anonymous masked freak, but when his Uncle is killed, Peter is struck by his Uncle’s parting advice: “With great power comes great responsibility.” In ASM #33 we get the answer to the question first posed two issues earlier: Is being Spider-Man really part of Peter’s destiny? Yes. It’s unavoidable, and Peter’s reluctant, but if he channels his powers correctly, he can overcome any odds. I don’t care how dumb you think comic books may be – there’s a kind-of poetry in that level of inspiration.
People unfamiliar with early Spider-Man history, but familiar with the movies may have remembered the storyline of this issue being adapted in Spider-Man 2 (the best of the three Spidey movies in my opinion). Earlier in the movie, Peter has “quit” being Spider-Man but is goaded back into action when Doctor Octopus continues to torment him, his family and his girlfriend Mary Jane. Of course the movie gives Spider-Man’s big triumph a more visually stunning edge – making him stop a moving subway train from falling over the edge of the tracks. So maybe the movie is only “loosely” based on this comic book arc, but you can see the connections, can’t you?
Bottom line, it’s a famous issue, with a ton of pop culture relevance, and thanks to online shopping, it’s now in my possession. Harkening back to my robo-collecting, the other two issues, ASM 47 and 48 where more or less acquired because they are a means to the end. But ASM #33 is an important one to me. So perhaps I have a pulse after all.