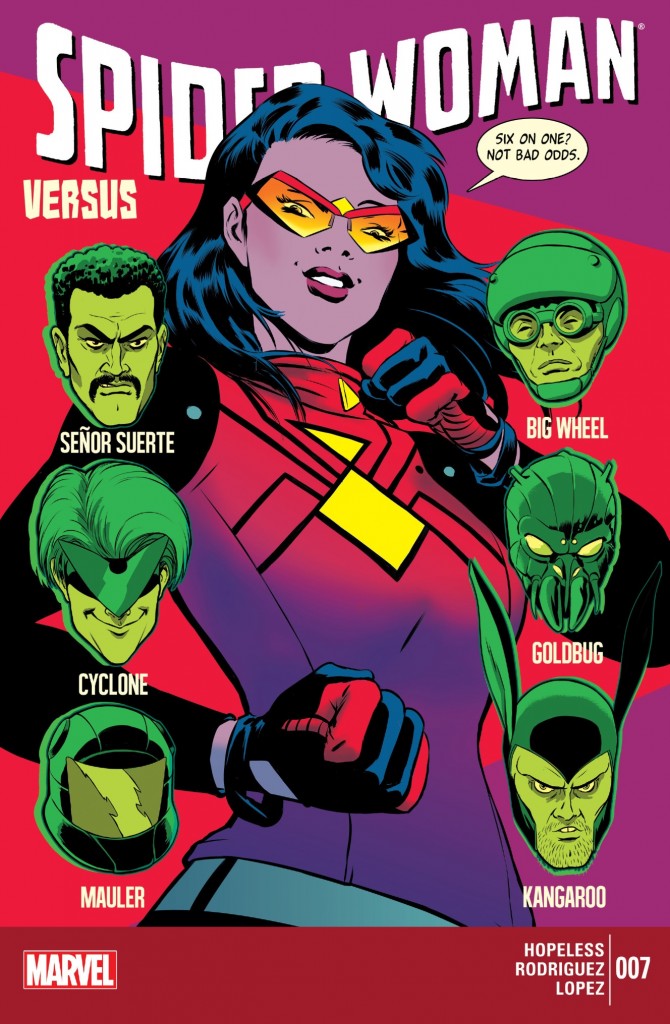 Spider-Woman #7 is a great example of how it’s easy to forgive a comic for moments of mediocrity when it’s been otherwise consistently delivering a riveting action-packed, character-driven story alongside stunning visuals that match the mood and vibe of the narrative perfectly.

In other words, I’m politely saying that there were some elements of Spider-Woman #7 that just didn’t scratch that itch for me, but I’m willing to have an open mind and see things through because writer Dennis Hopeless and artist Javier Rodriguez have just been so dynamic since the series was effectively rebooted in the wake of “Spider-Verse” earlier this year. 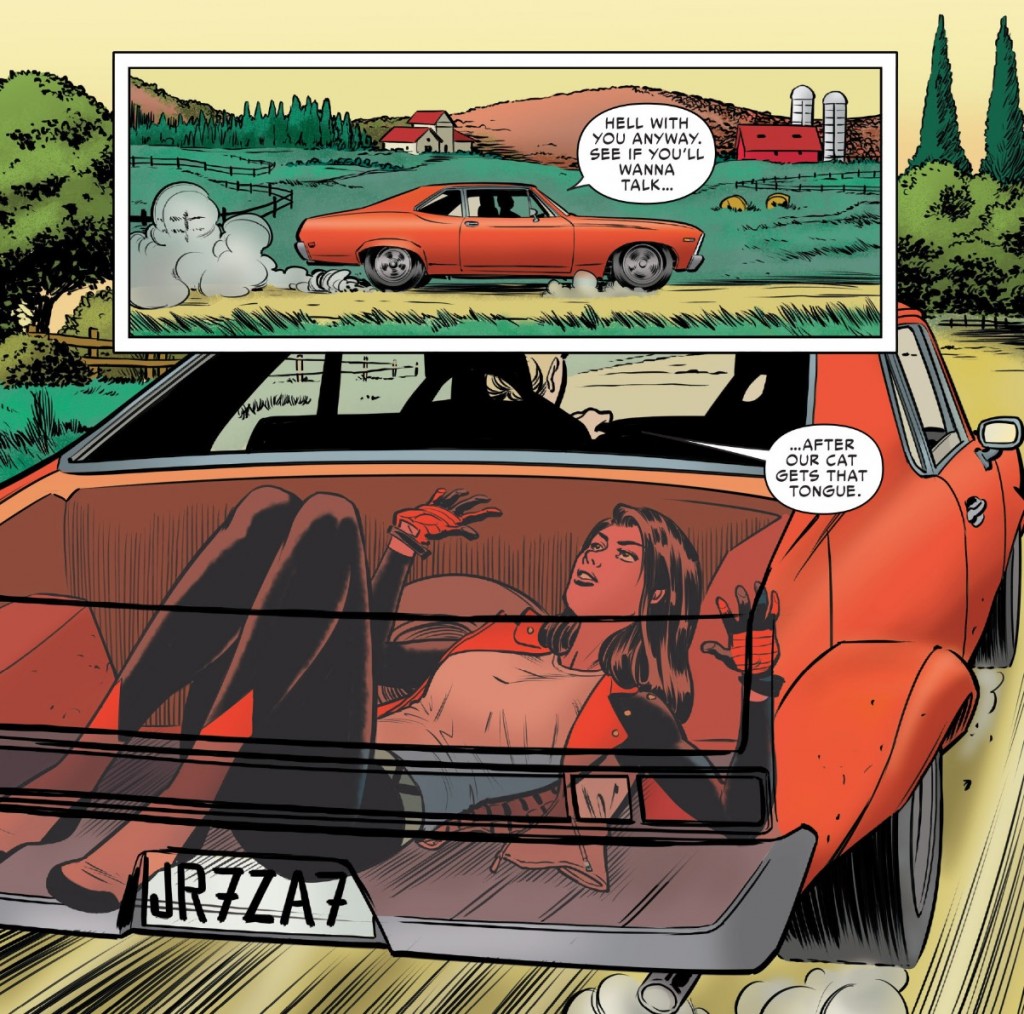 Spider-Woman still has some moments of greatness. Watching Jessica Drew escape a seemingly impossible situation (accompanied by a wonderfully dynamic double-page spread from Rodriguez) and then attempt to assimilate herself in a pseudo-Stepford Wives suburban nightmare, only helps to further flesh out this new super-duper street level status quo for the character, while also providing some old reliable “fish out of water” comedic beats.

Concurrently, pairing off crusty Daily Bugle reporter Ben Urich with a down-on-his-luck supervillain Porcupine/Rogers Gocking takes the “odd couple” feel of the previous few Spider-Woman issues (when it centered on the Jessica/Ben dynamic) and then kicks it up a couple of notches on the funny scale.

This comic continues to be at its very best when the writing is focused strictly on the relationships between these eclectic, bordering on bizarre personalities, and Rodriguez is given ample room to visually decompress a scene like Jessica eating cereal out of a soda cup. Even when Rodriguez doesn’t get nine panels to break down a simple action, he is consistently finding ways to economically illustrate a number of different action elements on a single page, like the aforementioned escape sequence where Jessica is shown slipping out of her Porcupine costume, escaping through a vent, running across a roof and then jumping down into the trunk of a nearby car. 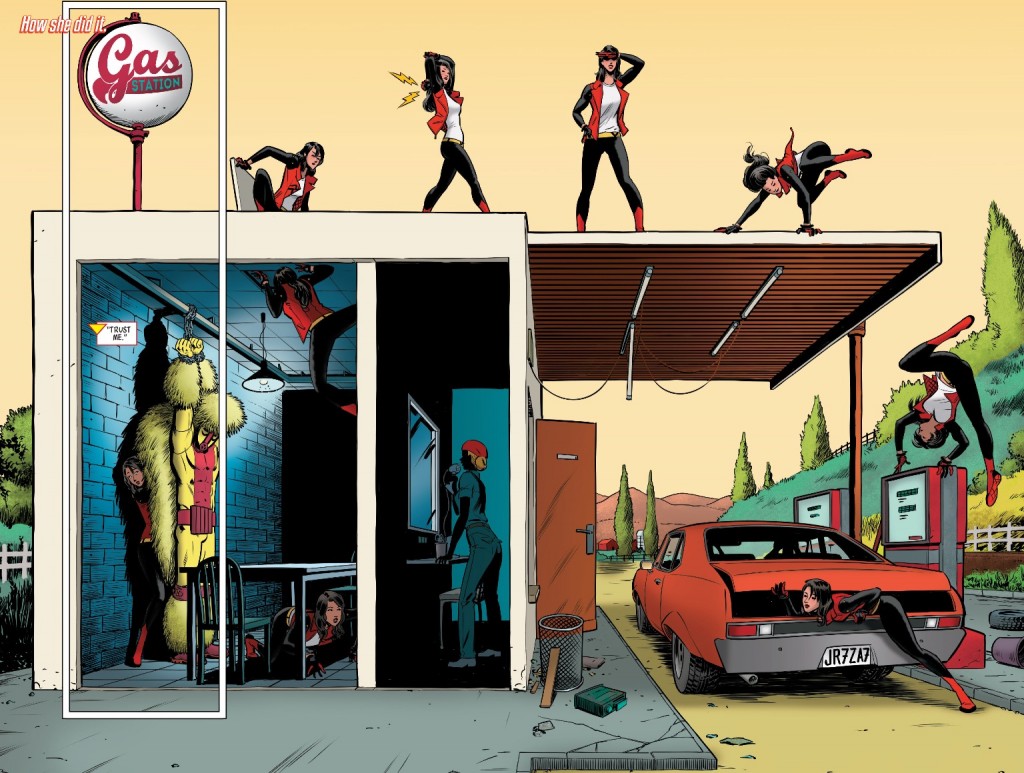 Hopeless and Rodriguez also find ways to spotlight little otherwise forgettable details, like Jessica leaving a price tag on a new dress that she just picked up, and using them to flesh out more personality quirks in the character (like how does Jessica not notice the tag flapping around near the back of her neck until she’s already traveled a significant distance on foot?).

But where Spider-Woman #7 struggles a bit is in streamlining its own information in a fashion that creates an easy-to-follow narrative, both visually and textually. By placing Jessica and Ben/Porcupine in two separate locations, the creators attempt to craft a parallel storyline that based on certain circumstances ultimately converges and meets. That’s a fairly common thing to do, especially in visual mediums like movies and television (and comics).  But where things get muddy for me in Spider-Woman #7 relates to how Hopeless/Rodriguez play with time within each timeline. Especially in the Jessica sequences, we get a few pages of action followed by a jump back in time before jumping back into the present. In the few instances where the Ben/Porcupine scenes get spliced in the middle of Jessica’s time-jumps, I think it creates a little bit of confusion. Considering how some of the flashback sequences are looking at moments that only took place minutes before the present, it’s not unreasonable to question if such a time jump was even needed. If the narrative stayed linear, the actual sequence of events, which culminate at that convergence point, which have been far less complicated. 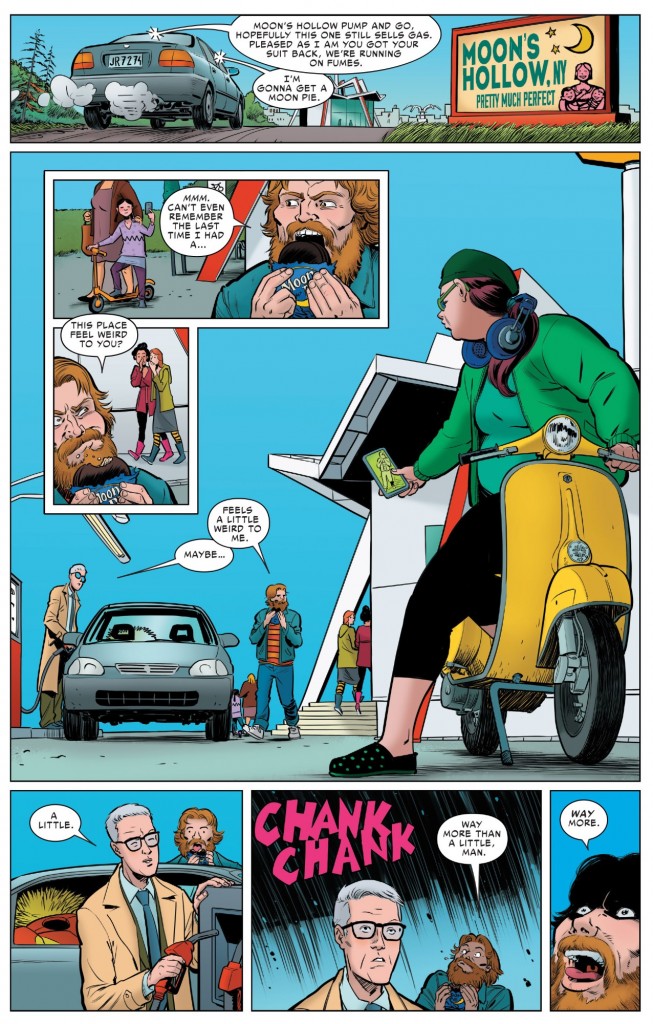 Meanwhile, the actual story reveal we get at the convergence point is more disappointing than needlessly complex. The reader finally learns who has been manipulating all of these D-list supervillains – Lady Earthmover, aka, a reinvention of an otherwise obscure Marvel character. I guess it fits the theme of the larger story arc involving all of these tertiary villains and their families – who else besides another tertiary villain would concoct some kind of plot involving the likes of Kangaroo and Senior Suerte? But the potential was there for a far more interesting character reveal using something with a little more juice (and a bibliography) in the Marvel Universe. Instead, it looks like we’re going to get a battle between Jessica and a villain in an exoskeleton in the next issue. 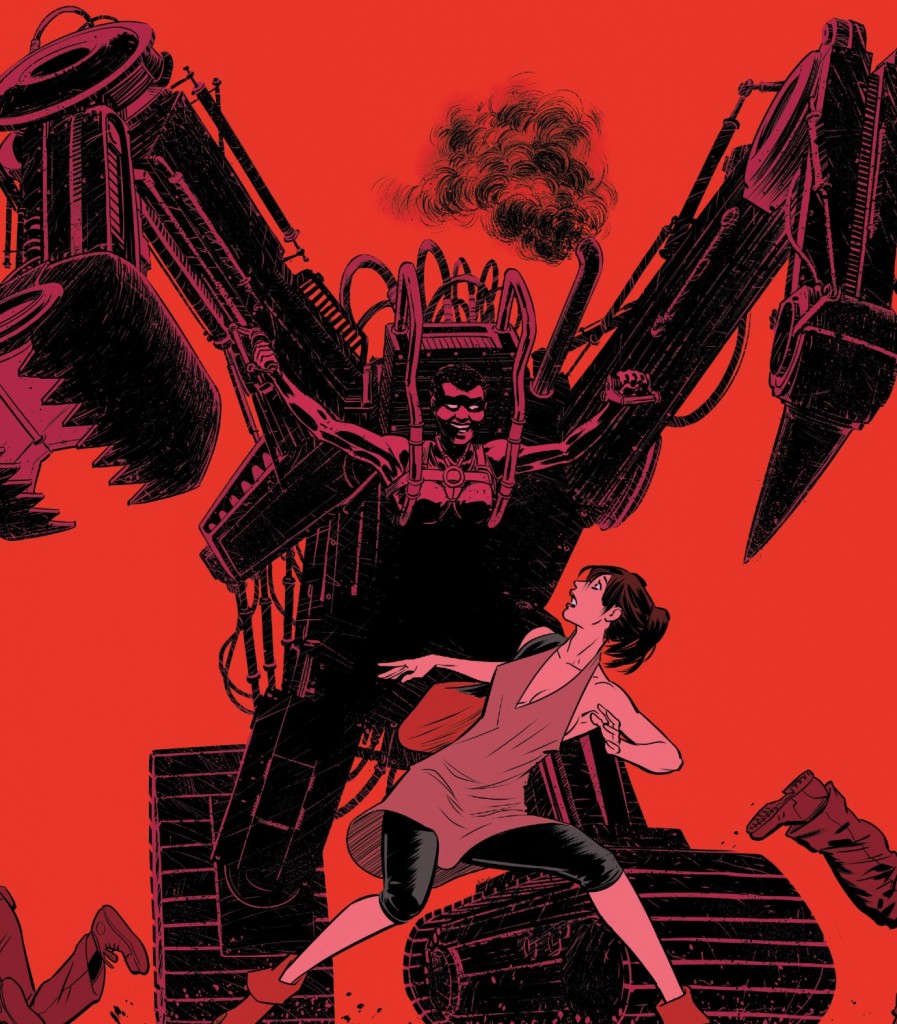 None of these concerns are actually deal breakers as it relates to this series, as I still think that Hopeless and Rodriguez have worked a minor miracle in getting me to consistently care about a character I’ve never really had an affinity toward, and doing it despite the fact that the first four issues tied-in to a larger story arc that I found to be an absolute nightmare. So consider this doubt having been given its benefits. It’s just that once the bar is raised for a comic book, those minor step backs become all the more apparent. Spider-Woman #7 is the most problematic issue in the series since its status quo shakeup, but it’s still better than a lot of other comics I’m currently reading.