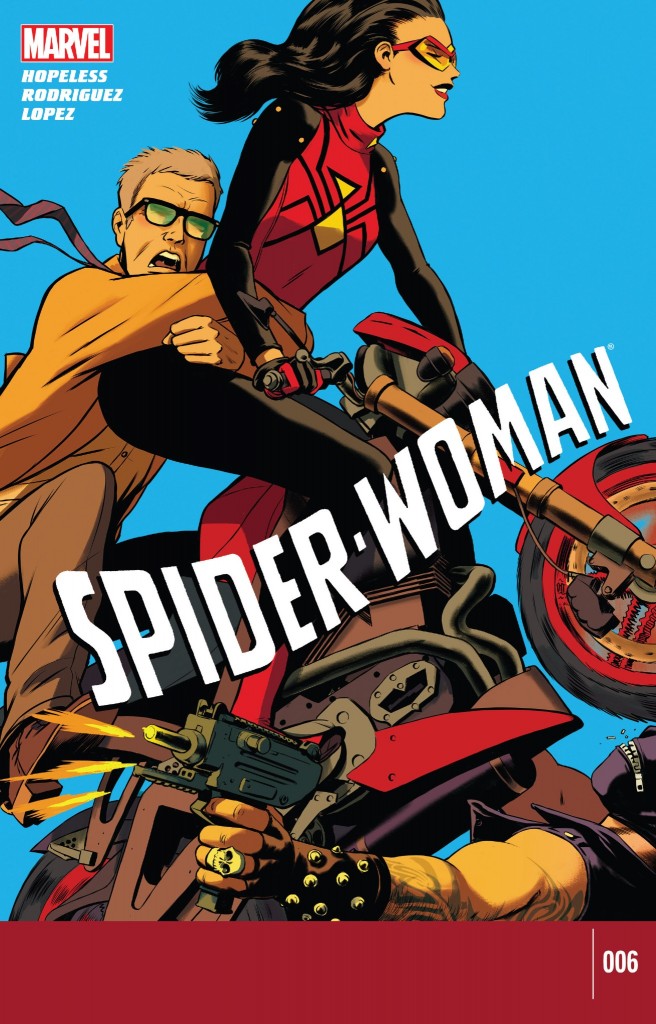 Readers looking to fill the void  of the recently-cancelled, smartly funny, character-centric Superior Foes of Spider-Man should look no further than what Dennis Hopeless and Javier Rodriguez are putting forward with Spider-Woman.

I haven’t touched upon Spider-Woman on Chasing Amazing since the third issue – one that was mainly filled with recycled content from an event I was well past burnt out on – but I did continue picking up the book because there was something in Hopeless’s writing that provided me with a glimmer of optimism for the future of the series. Perhaps once Jessica Drew moved beyond the convoluted theatrics of “Spider-Verse,” Hopeless might be able to tell a riveting story with her. 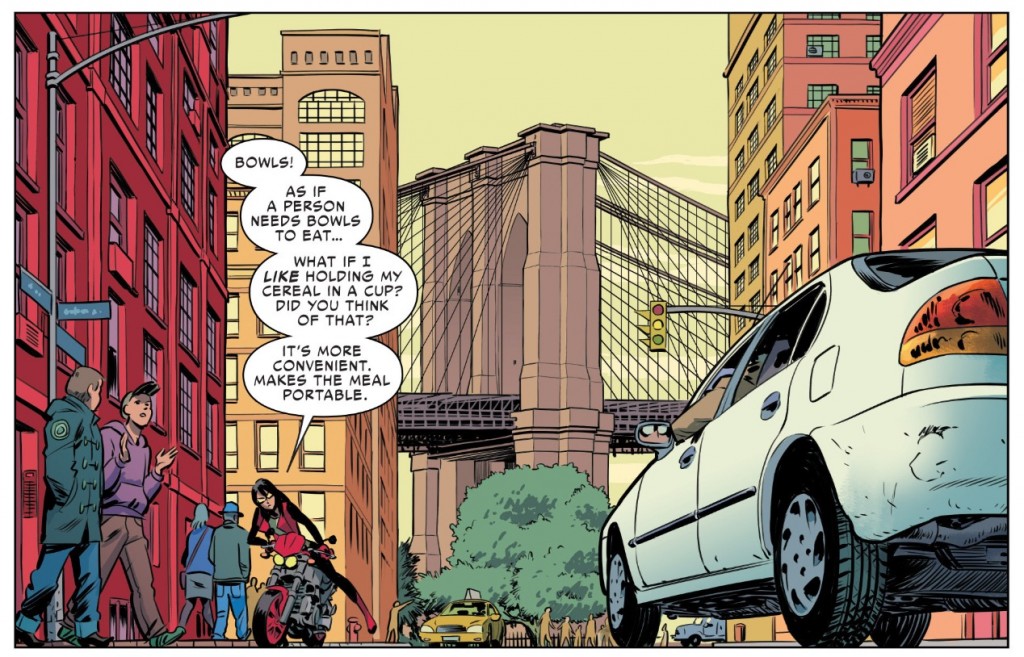 Hopeless has answered the bell and then some. And Rodriguez’s Frank Miller/Klaus Janson-ish pencils and inks are the perfect complement to the book’s quirky yet grounded script that is reinventing a character I have never truly cared much for.

I never got around to writing about Spider-Woman’s status quo shift last month, but I did address it a great deal with Hopeless on a recent episode of Amazing Spider-Talk, which I recommend you check out regardless of whether or not you’re a fan of this book. 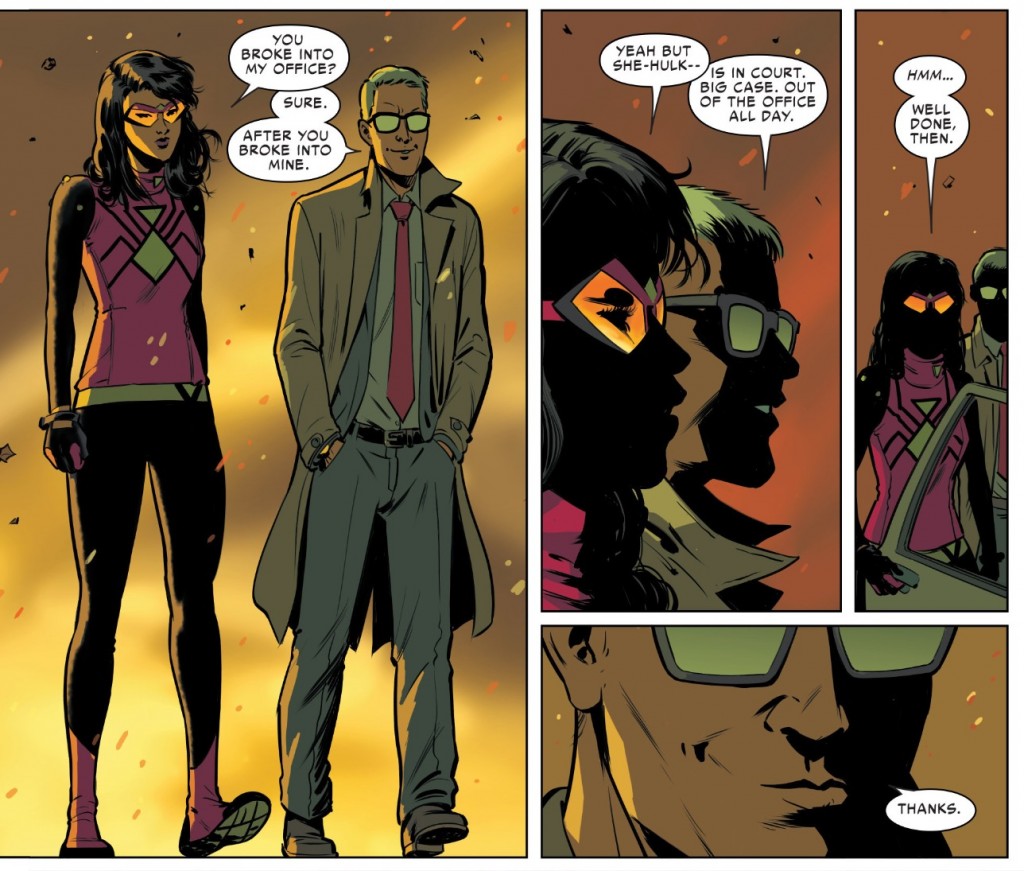 Spider-Woman #6 presents more of the same good stuff for the reader. Humor – lots of humor – but a street-level grittiness and realism that makes the book come across as shockingly edgy, even by 2015 standards. For those who read the first four issues of this series and lost interest, I have to assure you that for the past two months, Spider-Woman is an entirely different book. The only resemblance the past two issues share with the first four is that they star a character named Jessica Drew. But even she feels starkly different these days – and it’s not only because of her new hip costume (a much more sensible design than the cheese-cakey spandex from the 70s). 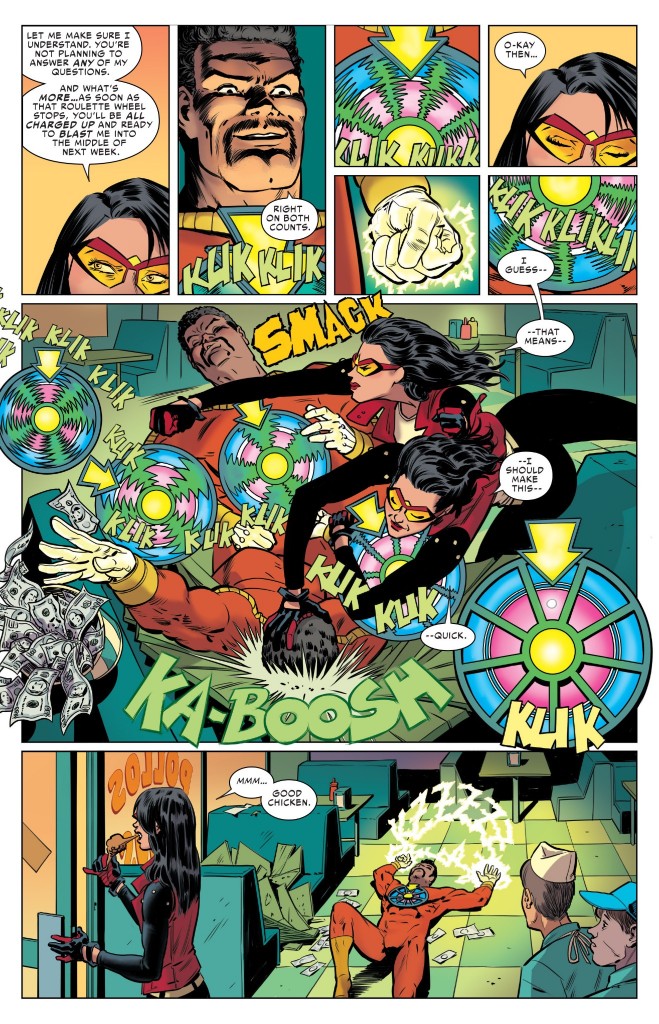 Getting Jessica away from the Multiverse and the Inheritors has allowed Hopeless to create a far more interesting supporting cast. Yes, yes, I know my love affair with crusty newspaper-man Ben Urich makes any praise I heap on the book’s cast come across as being extraordinarily biased. But even the D-list villains Hopeless and Rodriguez select for this series are fully formed and engaging. Baddies like Porcupine and Big Wheel have long been played for yuks by the comic book community, and we still get some yuks at their expense (like when Jessica frees a herd of alpacas from Big Wheel’s clutches). But these are villains with back stories that need to be considered by the reader. As the comic’s main narrative/mystery unfolds, we learn that these small-time crooks are being strong-armed by someone who must be pretty powerful (or well-connected). These aren’t just villains doing stuff to advance a story. They are the story. 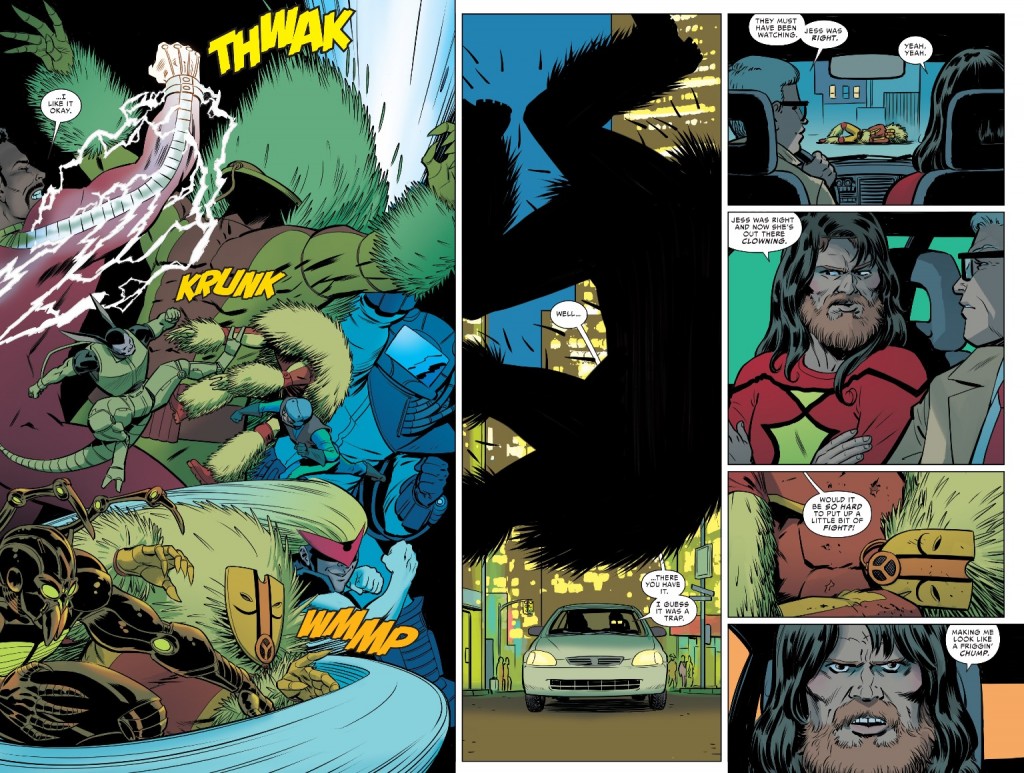 Meanwhile, Hopeless is clearly writing Jessica with far more confidence than he did when he was operating within the tight, editorially-mandated confines of “Spider-Verse.” She’s funny without being obnoxious. She’s capable without coming across as infallible. She eats cereal out of an old soda cup. In other words, she’s pretty much everything I wish Peter Parker was these days in Amazing Spider-Man, but that just doesn’t seem to be the direction Marvel’s editorial department wants to go. So instead, I’ll continue to get my fix of relateable superheroes from Spider-Woman, and to a lesser extent, Spider-Gwen.

The metamorphosis of Spider-Woman over the past two months is a perfect example of how the industry’s executive-driven desire to attract more readers via events, crossovers, and over-the-top theatrics is an absolute drag for old-school readers like me who just want to sit down and enjoy a comic book for its art, action and characterization. I hope Hopeless and Rodriguez continue to have the breathing room required to unfold this narrative, similar to what Nick Spencer and Steve Lieber were able to accomplish with Superior Foes. Of course with Secret Wars around the corner, that might be expecting a bit too much.