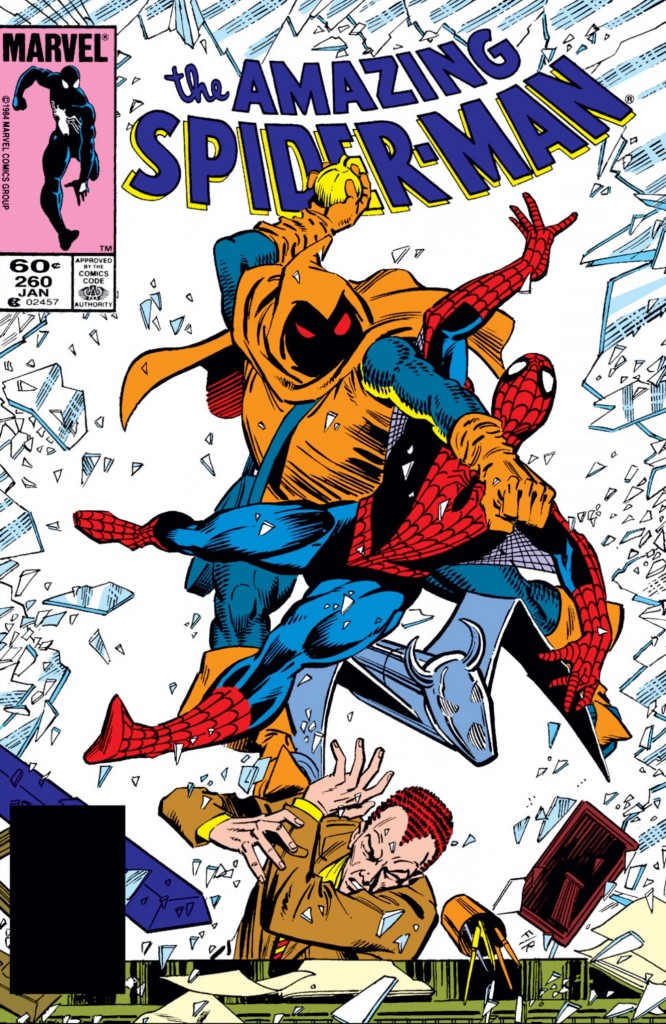 Alright, true believers. After spending the past few weeks harping on all of you to tell me some of your favorite Spider-Man storylines, Chasing Amazing’s second annual Reader Request Month is here! I can’t guarantee I’ll get to cover as many suggested stories as I did last year (seriously, did I do anything else in 2013 besides write for this blog? Maybe not!), but I am angling to do a nice cross-section of what was sent in to me.

This first reader request came via Clancy Champanois on Facebook. Clancy suggested either Amazing Spider-Man #240-241, a Roger Stern Vulture story, or Amazing Spider-Man #260-261. Personally, I love the way Stern writes the Vulture, but as anyone who has been following this blog for a few years now should know, I have an unhealthy obsession with the Hobgoblin. And since I’m yet to write about the Tom DeFalco/Ron Frenz storyline that kicked off what is unofficially known as the “Second Hobgoblin Saga” (I did a summer review series on the “Original Hobgoblin Saga” in 2013), you better believe I’m jumping all over ASM #260-261. So thanks for the suggestion Clancy. Hopefully I can cover that Vulture tale down the road.

As I mentioned in this rather exhaustive Hobgoblin retrospective I wrote for Comic Book Resources earlier this year (which was culled from some of the interviews I helped conduct with DeFalco and Frenz for Superior/Amazing Spider-Talk), as ASM transitioned from Stern/John Romita Jr. to DeFalco/Frenz, one of the biggest dangling threads was the identity of Spidey’s newest supervillain, the Hobgoblin. In one of his final issues, Stern had started to lay the groundwork for the brother (not a twin) of Roderick Kingsley angle, which would later be confirmed in the Hobgoblin Lives miniseries. But DeFalco thought the brothers who look alike but aren’t twins angle was a little hokey and wanted to go in his own direction. 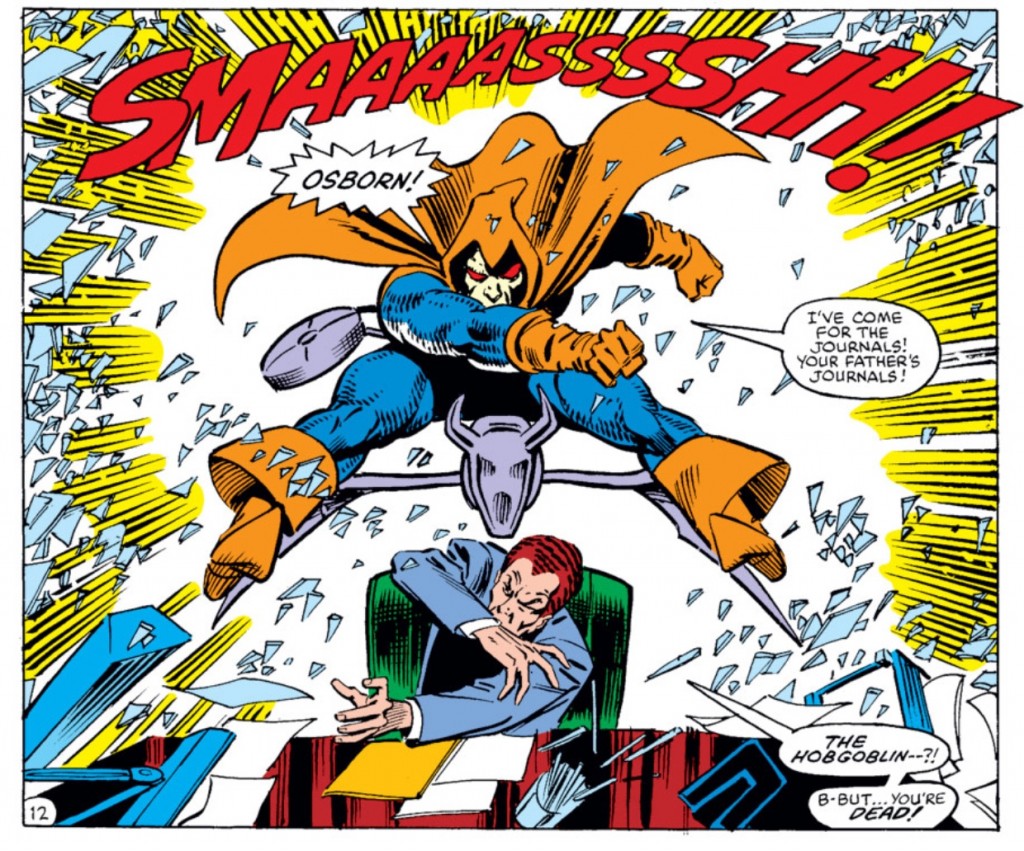 We first learned that the Hobgoblin had somehow survived the submersion of his battle van in the East River over the course of the multi-part “Alien Costume Saga” (this year’s summer review series). But outside of maintaining the aura of mystery surrounding the character’s identity, DeFalco or Frenz don’t really provide many hints as to who is under the mask in those comics.

While the character was ultimately revealed to be Ned Leeds by Peter David in ASM #289, DeFalco and Frenz had long claimed that they intended for the Hobgoblin’s secret identity to be Richard Fisk, aka the son of Wilson Fisk, the Kingpin of crime. Kingsley, Stern’s ultimate choice for the Hobgoblin, would be revealed as the well-coiffed masked crime boss, the Rose, and Leeds was meant to be a red herring. Unfortunately, conflicts with editor Jim Owsley (who has since legally changed his name to Christopher Priest), prevented DeFalco and Frenz’s reveal from happening.

So with all this information in mind, I definitely found myself re-reading ASM #260-261 with copious amounts of behind-the-scenes drama and context in mind. As such, it’s hard for me to read any of these second wave Hobgoblin stories without constantly looking for any evidence that support or rebuke DeFalco/Frenz’s reported intentions of making Fisk the guy. Did this approach perhaps limit or inhibit my overall enjoyment of this arc? I will admit that I read this comics with a far more clinical perspective than I would have if I wasn’t so knee deep in Hobgoblin lore. 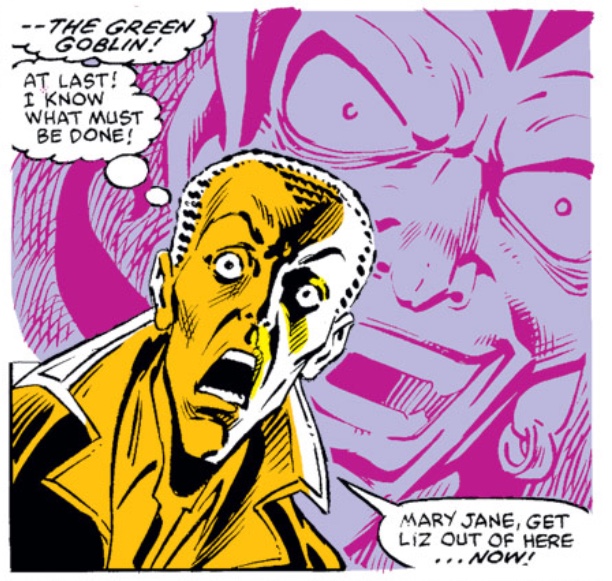 So, if any of what I write seems disproportionately critical, just know where it’s coming from – my first-hand knowledge of how the sausage was made. There are a number of insinuations regarding the Hobgoblin’s identity, but I can’t say with confidence that a single one fairly indicates Richard Fisk. Considering how DeFalco claimed he disliked the Kingsley brother idea because introducing a lookalike character so late into a mystery would be unfair to the audience, one would think that Fisk’s name would be invoked somewhere across these two issues. The only possible case that could be made in that regard is how the Hobgoblin has suddenly (and without giving a reason) aligned himself with the Rose, whose primary mission is to destroy the Kingpin’s empire. Perhaps one could argue that Fisk-as-Hobgoblin only teamed-up with the Rose to destroy his father. But the more logical explanation for this scenario was what ultimately transpired – Fisk was actually the Rose.

And even if we’re still hanging on to the idea of casting Fisk as Hobgoblin, I’ve still never been a huge fan of how the DeFalco/Frenz run transformed Hobby into more of a henchman and mercenary. Under Stern’s watch, the Hobgoblin was a larger than life villain, who didn’t need to band together when any other criminals. He single-handedly brought some of New York’s wealthiest and most esteemed individuals to their knees when he blackmailed them all in ASM #249-251. Then, when you consider the fact that the villain has access to all of the Green Goblin’s toys and technology (and the serum, which gave Norman Osborn super strength), it just seems odd that Hobgoblin would humble himself to the point of being the Rose’s hired muscle. I guess money talks, but still, it’s a sudden change of character in retrospect. 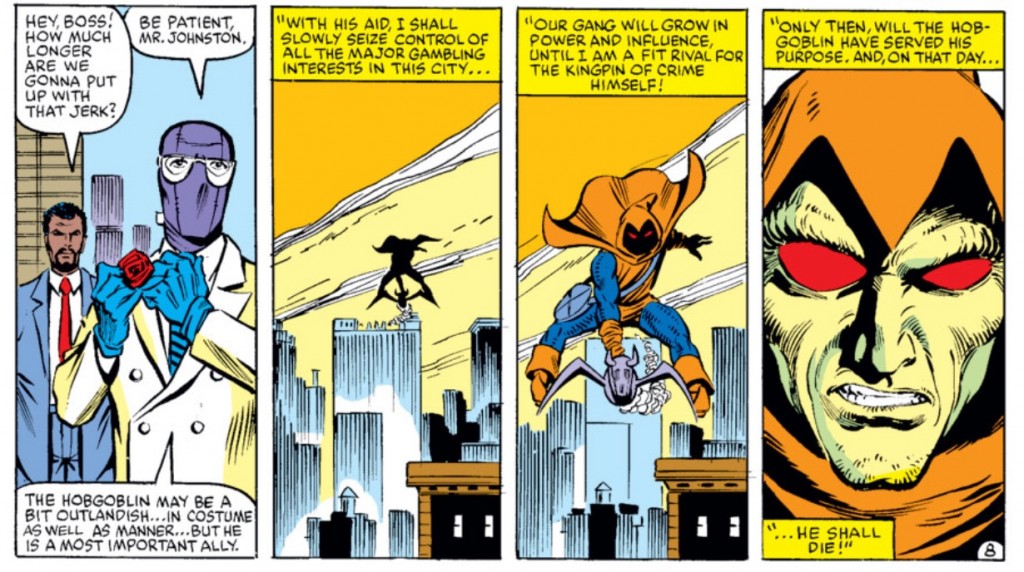 DeFalco’s script goes on to drop other little hints and teasers. In one sequence, we see Hobgoblin wreaking havoc in costume and then we flash over to the Daily Bugle where Betty Brant is wondering where her husband Ned is. Granted, DeFalco has said that he never planned on Ned being the Hobgoblin, but why tease the red herring but not the actual mystery man? You’re telling me Fisk couldn’t have been snuck into this script somewhere, even just as a background character?

There’s also a scene where Mary Jane and Liz Allan are being held captive when the Hobgoblin refers to MJ by name. She immediately puts two-and-two together that she is dealing with someone she knows in some capacity. That could be another Ned reference, or a nod to Kingsley, the fashion designer that Mary Jane did modeling work for. But still no Fisk anywhere. 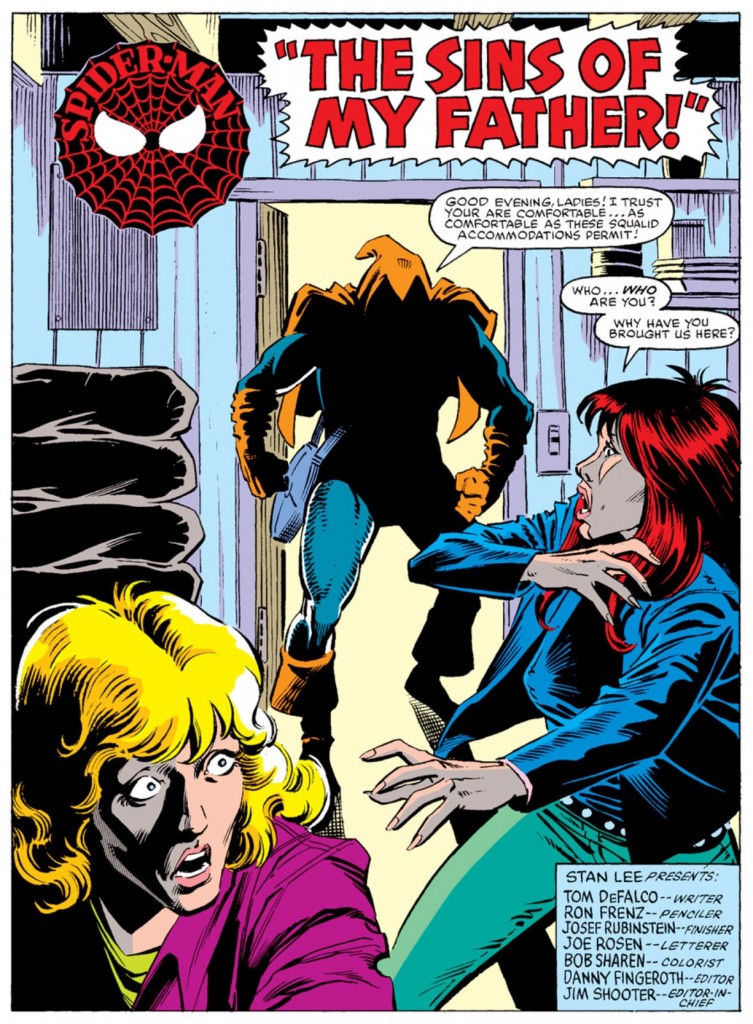 All of this is to say that there is still plenty to absolutely love about this storyline, ultimately making it another demonstration of DeFalco/Frenz’s prowess in the mid-1980s. I love the way the creators weave in Spidey’s entire supporting cast, moving seamlessly between Aunt May’s fight with Peter over him dropping out of grad school; the return of Mary Jane and her knowledge of Peter’s secret identity; Norman and Liz, the expected parents; and of course, the central Spider-Man/Hobgoblin hero/villain showdown.

And the ending is about as good as it gets in Spider-Man comics. After recuing Liz and MJ from a burning building, Spidey is tasked with either subduing the Hobgoblin or helping his best friend, Harry. Spider-Man has just laid a pretty severe beating on Hobgoblin, and even chirps that he should just web the villain up and let the authorities take care of him, but Hobby reminds him that by doing that in a building on fire, he would be leaving him to die. Spidey realizes that Hobgoblin has him over the barrel, and does the only thing he can do, leave the villain unattended so he’s able to escape, in order to rescue Harry.

The DeFalco and Frenz run was always so good at zeroing in on these moments of consequence and irony. We’ve seen it in other classic stories from this era such as “Whatever Happened to Crusher Hogan” and the “Alien Costume Saga.” I guess the fact that these two are such gifted storytellers is why I can look at an arc like ASM #260-261 with hindsight and find some little details that could have used some refinement.