Given that the Vulture was the prime antagonist in ASM’s #674 and 675 (which are sadly, the last two issues I’ve received from Marvel’s subscription service – come on guys, how hard is it for you to put a comic book in the mail in less than a month?), I was reminded of ASM #224, a classic issue that’s best known for being the start of the much-revered Roger Stern-John Romita Jr. run on Spider-Man. 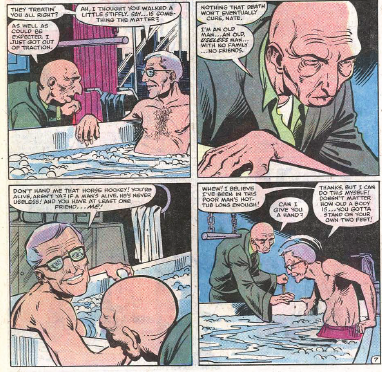 Stern has been on the record saying that the Vulture was one of his favorite classic Spidey villains and it shows. While the Vulture has always been a major thorn in Spider-Man’s side, I believe Stern helped elevate old man Adrian into the upper echelon of Spidey villains because of the way he humanized him and utilized him as a contrast to the younger, more honest Peter Parker/Spider-Man. When I spout off about villains being too one-dimensional these days, it’s because issues like ASM #224, and writers like Stern show that it’s not that difficult to add depth to a familiar character.

Because when you look at the Vulture on paper, he initially comes across as a secondary, unimposing villain. His super powers are based on a pair of mechanical wings that in addition to helping him fly, make him more nimble. He’s not out for world-domination, but rather is more of an old-school crook, who’s trying to collect riches and jewels and things of that nature. And of course the real kicker is he’s the only major Spidey villain I can think of who’s an honest-to-goodness geriatric. After he was first introduced in ASM #2, Marvel tried to weave in younger characters as the Vulture, but the smart writers almost always returned to Adrian Toomes because his old age lend a unique dynamic to his confrontations with Spider-Man that are otherwise missing with a younger character. 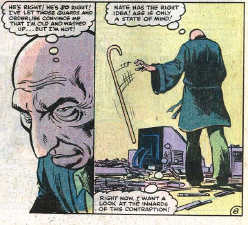 I love that Stern goes as far as putting a seemingly-retired Toomes into an old-age home where he then meets Aunt May’s love-interest Nathan Lubensky. Toomes is clearly at his lowest point since he was first introduced all those years ago. He looks defeated. He’s no longer denying the fact that he’s an old-man and may not be cut out for the life of crime he initially desired. Employees at the home comment on Toomes advanced strength for someone his age, but the praise falls on deaf ears, and instead Adrian is more obsessed with the fact that he’s too weak and frail to ever fly as the Vulture again.

That kind of vulnerability is missing from most major supervillains in the comic book universe. While we’ve had plenty of storylines over the years of evil-doers contemplating their mortality and their persistence to keep trying to take over the world, only to be thwarted by the superhero, when do you ever seen a villain sitting in an old-age home looking so depressingly beaten down?

The fact Nathan’s 50s-era, “young at heart” speech reinvigorates Adrian makes the transformation all the more enjoyable for the reader. Toomes is still an old-man, but when he hears his friend spout off about being able to stand on his own two-feet despite his aging, failing body giving him all he can take, it’s just the kick of the pants to inspire him … back into a life of crime. It’s a fantastic twist where for half-a-second as a reader, you find yourself actually rooting for the old man, until you realize that his terror comes at the expense of Spider-Man.

And while Doctor Octopus and later Green Goblin are the better foils for Spider-Man based on their history with the character, Stern does some fantastic work demonstrating how Toomes is also a worthwhile adversary. Stern plays up Vulture’s age, but also uses it as a contrast to the Spider-Man’s youth. Peter has always had a very healthy respect for the elderly – his Aunt May, Uncle Ben, Captain Stacy, etc. So pitting him against someone in that age bracket, who’s hell-bent on striking Spider-Man down, adds to the conflict. And if you’re reading this story for the first-time and you question whether or not Spider-Man should use his full-strength to out-gun an old man who was just in traction, than Stern has done his job. Of course, the reader should also realize rather quickly that if Peter pulls any of his punches, he’s toast, and other elderly folks at the home could get hurt on his watch. 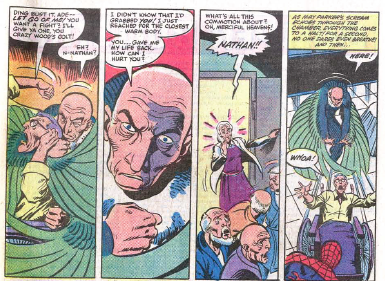 With this issue, and all of Stern’s work on the Vulture in mind, I was thrilled to see how Dan Slott brought back Toomes for the modern-era. Having him lead a pack of teenagers who he has manipulated into doing his bidding, while increasing his own strength and dexterity comes across as a build on the foundation Stern laid for the character during his 1980s run. There’s still that vulnerability there – why is Toomes resorting to using kids to do his dirty work? – but there’s also a clear and present danger for Spider-Man whenever Adrian puts the wings back on. And that’s always a good thing when you’re crafting a winning storyline for a comic book villain.