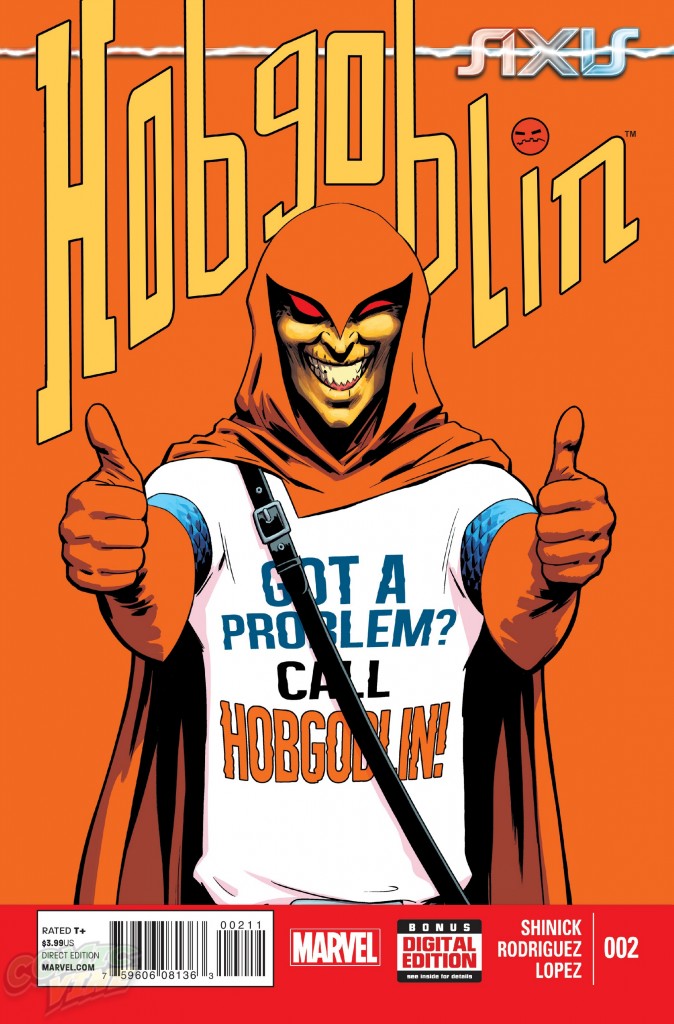 Two-thirds of the way through its criminally short run, the Axis: Hobgoblin miniseries continues to be one of the smartest and funniest comics I’ve read this year this side of Superior Foes of Spider-Man. Kevin Shinick’s script just fires on all cylinders, delivering both traditional humor and more atypical meta-humor which is all the vogue these days. Meanwhile, Javier Rodriquez and Will Sliney’s artwork manages to aesthetically mesh with the book’s tone and vibrancy.

A book this good presents a bit of a conundrum for me. Much in the way I sometimes struggle to write a fully-formed, coherent post about Superior Foes (when I try to avoid repeating for the umpteenth time that Nick Spencer and Steve Lieber are just really, really good at being comic book creators), it’s a little hard for me to explicitly verbalize what’s so wonderful about what Shinick and Rodriquez have put together here without repeating ad nauseum, that everything was good and funny. 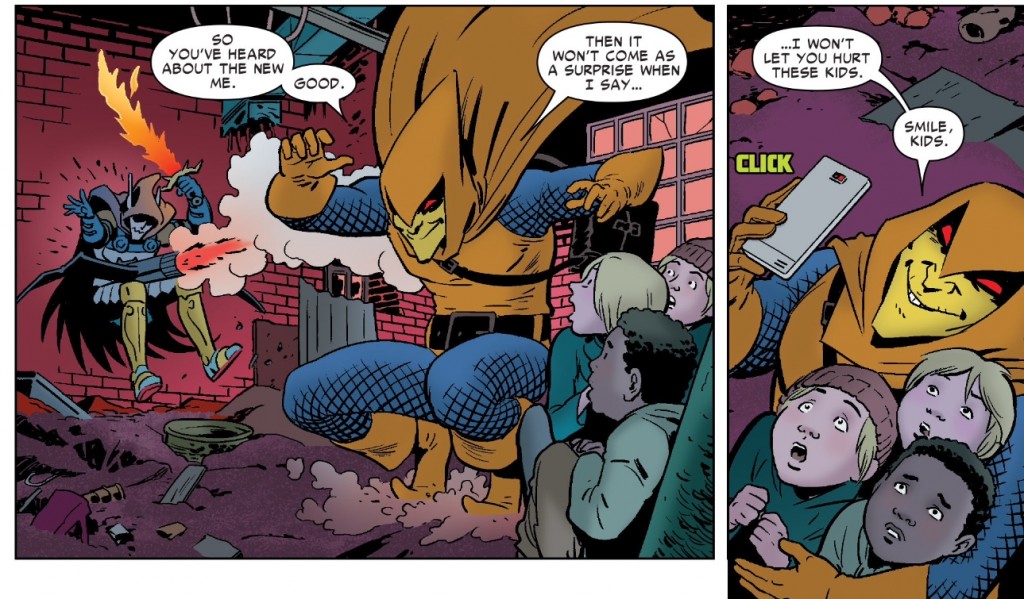 It all boils down to the a creator’s touch and feel for the character. As I mentioned the last time I talked about this series, despite the fact that the Hobgoblin has been a part of the comic book universe for more than 30 years, there’s been very little exploration of the character as Roderick Kingsley, giving Shinick and Rodriquez a fair amount of latitude. Still, both do need to be cautious about being too radical in how they characterize and develop Kingsley. But Shinick and Rodriquez manage to strike the balance by using the far out Axis “inversion” concept to their benefit, while still crafting a story that at its very core, feels true to the characters.

Obviously the main theme of this comic and the series as a whole is just how “good” is Kingsley now after the Axis inversion? Is this sudden wave of altruism from the lifelong villain really about making the world a better place by giving other people a chance to be heroes, or is he really only doing it because it lines his pockets with endorsements and good press. While there is a heavy inclination to believe the latter when it comes to Kingsley, Shinick’s script is slick enough to at least leave things ambiguous about his intentions. 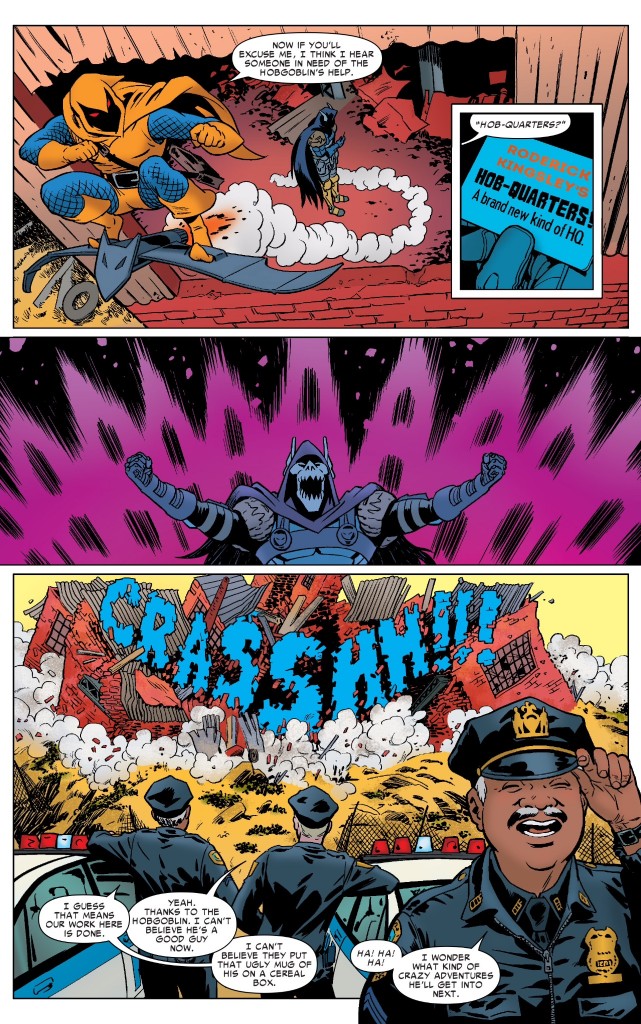 Clearly Kingsley is benefitting greatly from his new good guy image, but he also seems to be embracing all of the love and adoration that comes with being hero. During his confrontations with Phil Urich (now the Goblin “King” in light of the recently deposed Norman Osborn), Kingsley is very cerebrally cutting with his comments about the guy who masqueraded as the Hobgoblin for a while, but also very comfortable in the fact that this confrontation will not devolve into a physical battle. In his scenes with Lilly Hollister, who Kingsley has apparently given the old brainwash treatment too, it’s obvious that Roderick sees her as a potential asset to his team, but he still has put her on the path to reformation, even if it was via shady methods.

Shinick’s script balances the story’s moral ambiguities, with rapid fire jokes and gags, including a number of puns involving different variations of the word “Hobby” that simultaneously made me laugh and groan in their dorkiness. And then who’s going to complain about Shinick going back to another one of his old friends, the Hypno Hustler (who appeared in an Avenging Spider-Man issue from 2011 that Shinick scripted) for a well-developed joke? 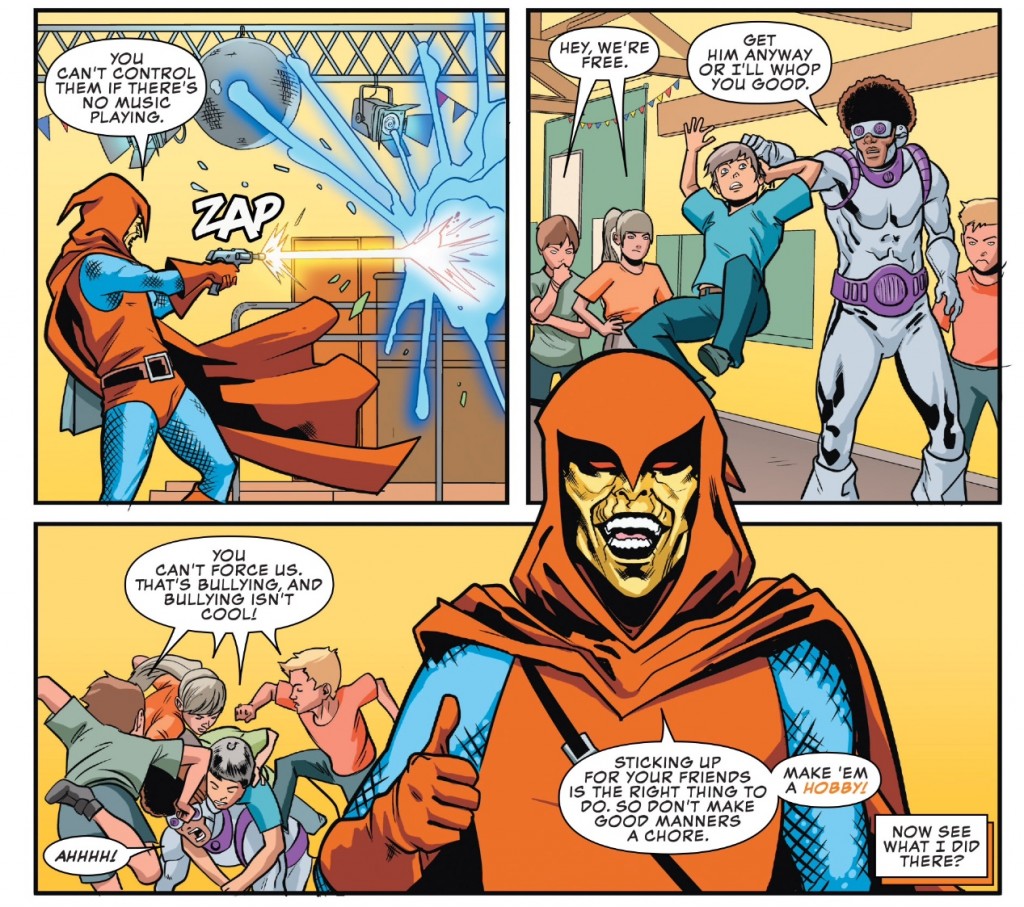 All of these different elements add up to equal a creative team that exudes the utmost confidence in the story they’re telling right now. And that’s what makes Axis: Hobgoblin such a joy. As a reader, I’ve got to watch Shinick and Rodriquez grow over the past few years. I’m sure it doesn’t hurt that both got to play in the “Goblin Nation” sandbox last year, with Shinick scripting the final four issues of Superior Spider-Man Team-Up and Rodriquez providing art for Superior Spider-Man Annual #2, which surely gave both even more familiarity writing and illustrating different corners of the Spider-Man universe. 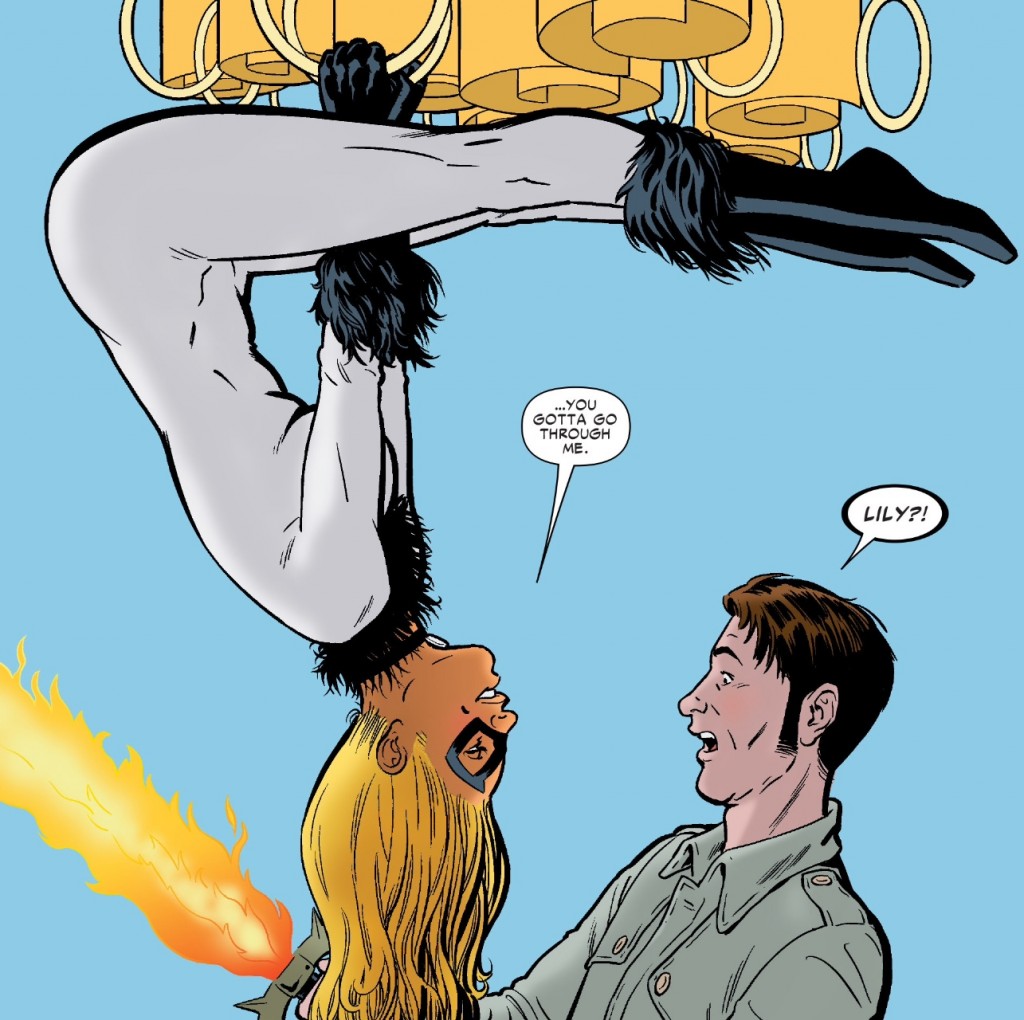 But Axis: Hobgoblin takes these other worthy projects and brings it to a whole other level. This is a book I would legitimately read if it was a monthly series from Marvel – and in many ways I could see this as a very worthy successor to Superior Foes of Spider-Man in terms of it being the company’s token off-beat, quirky book that probably won’t be a top seller, but will be critically loved, and adored by hardcore Spidey fans. I guess Spidey fans can only access for so many one-offs and minis to be transformed into ongoings (though I’d take a Hobgoblin series over Silk at the moment). But if nothing else, I hope these first two issues put Shinick and Rodriquez on Marvel’s radar as creators who really need to be doing a lot more than they’re currently doing.