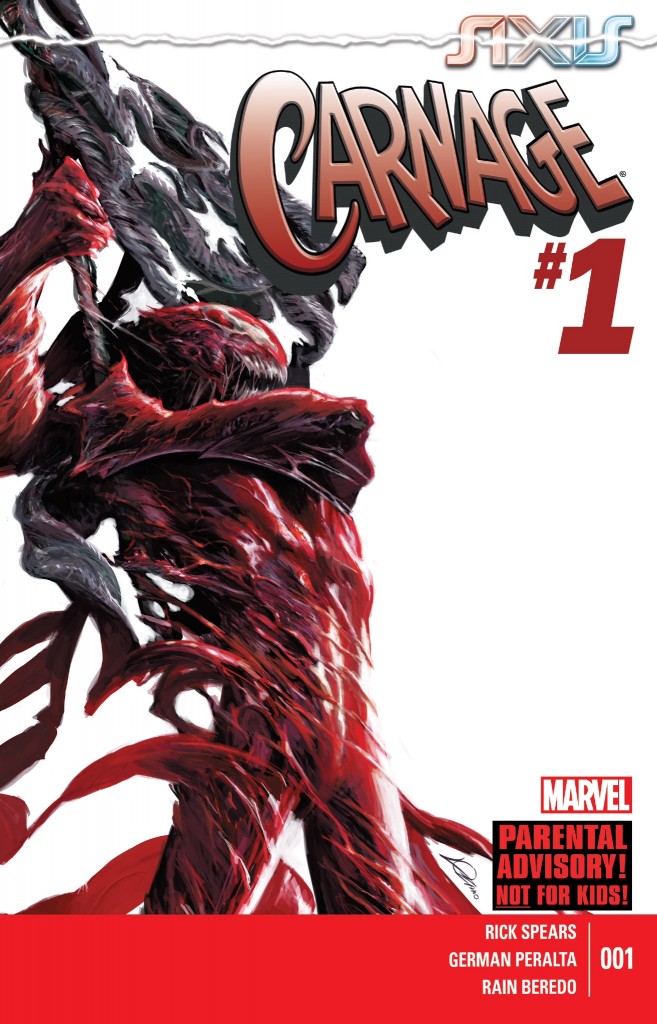 For the second time in a little more than a year, I have found myself pleasantly surprised and quite intrigued by a creative team that is looking to take one of my all-time least favorite characters in Carnage, in a brand new direction.

Axis: Carnage #1, which is written by Rick Spears with art from German Peralta is a fantastic opening issue, featuring a very dark yet funny sensibility as it depicts the mass murdering Carnage being impacted by the “Inversion” spell that’s at the focal point of the Avengers/X-Men: Axis miniseries, and turning over a new leaf – sorta.

Thus far, the main Axis mini has been an absolute slog to read through, but if the offshoot of it are two quality miniseries in Axis: Carnage and Axis: Hobgoblin (which received a glowing recommendation from me earlier this week), then I guess the comic book industry’s penchant for non-stop events has had some measure of positive impact. 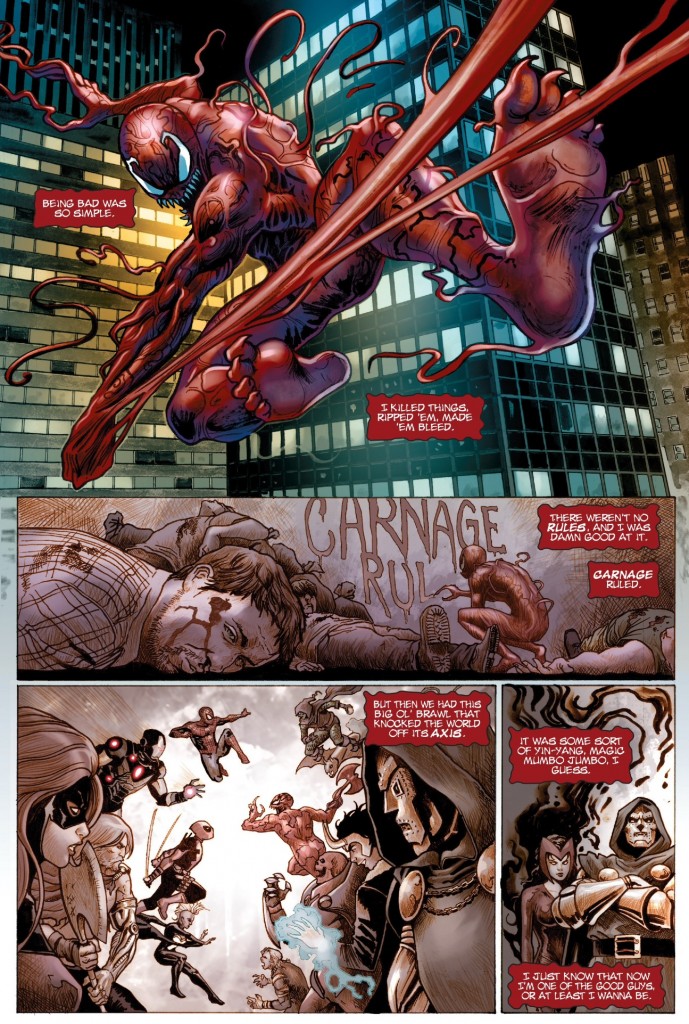 Like what Kevin Shinick did with Superior Carnage last summer, Spears succeeds in taking everything we know about Carnage and throwing it out the window in an attempt to tell an entirely new story about the sociopathic symbiote. However, in contrast to Shinick, rather than just stick the symbiote with another character, Spears raises the degree of difficulty a notch by attempting to portray the original Carnage, serial killer Cletus Kasady in a brand new light. People who LOVE Kasady and hate to see anything changed about their precious, previous Carnage (and those fans are out there), will likely complain that Spears’s characterization doesn’t ring true, but as the opening narrative explains, this “Inversion” is basically some hocus pocus magic that’s making everyone act out of character. So as long as you buy in to this general premise – and as someone who has grown quite bored of the same old, same old Carnage plots, I unquestionably buy in – I don’t think you’ll be too hung up on Kasady’s depiction here. 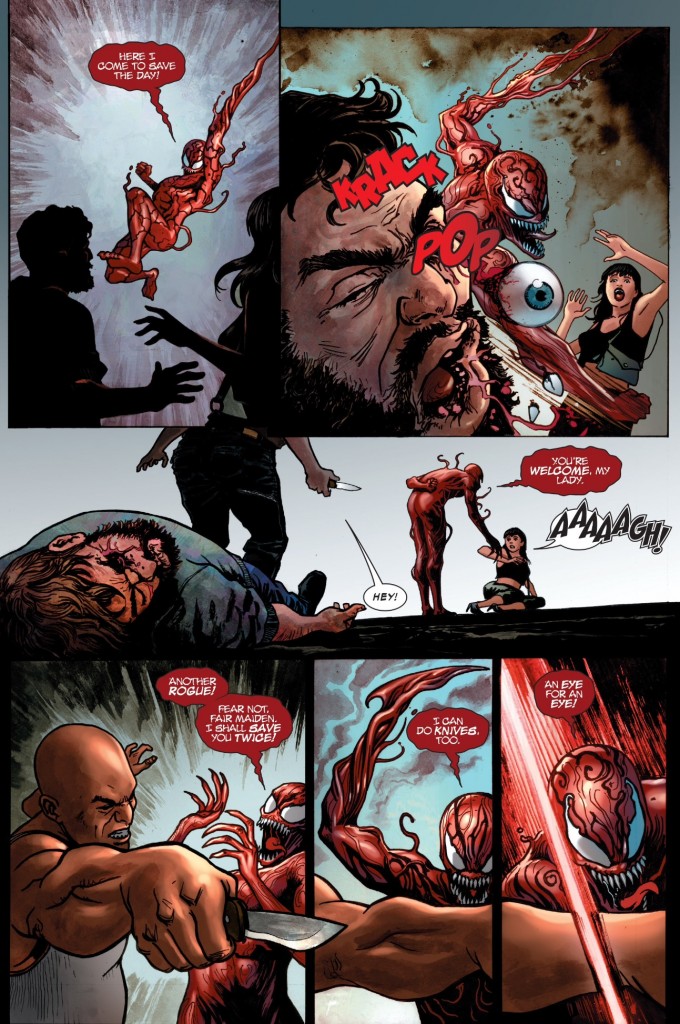 Spears walks a fine line in giving Kasady/Carnage a wholesale makeover, while maintaining a sharp wit and sense of humor. This is best demonstrated in all of the scenes showing Carnage trying to make it work as a hero, and failing horribly by doing non-heroic things like killing or maiming the “villains” in horrifying ways. And yet Carnage is still determined to make it work – a character choice I’m far more interested in reading about rather than checking in on something that shows Kasady trying to fight the “magic” of the Inversion and instead reconnect with his inner sociopath.

Axis: Carnage even plays off the age-old Spider-Man trope of the public perceiving the hero as a villain. In one scene, as Carnage is once again trying to do right by an innocent victim, a bystander on the street calls him as a villain. Carnage, in very Parker-esque fashion, bumbles an explanation claiming he was only trying to help. This whole sequence is just textbook satire and a delight to read. 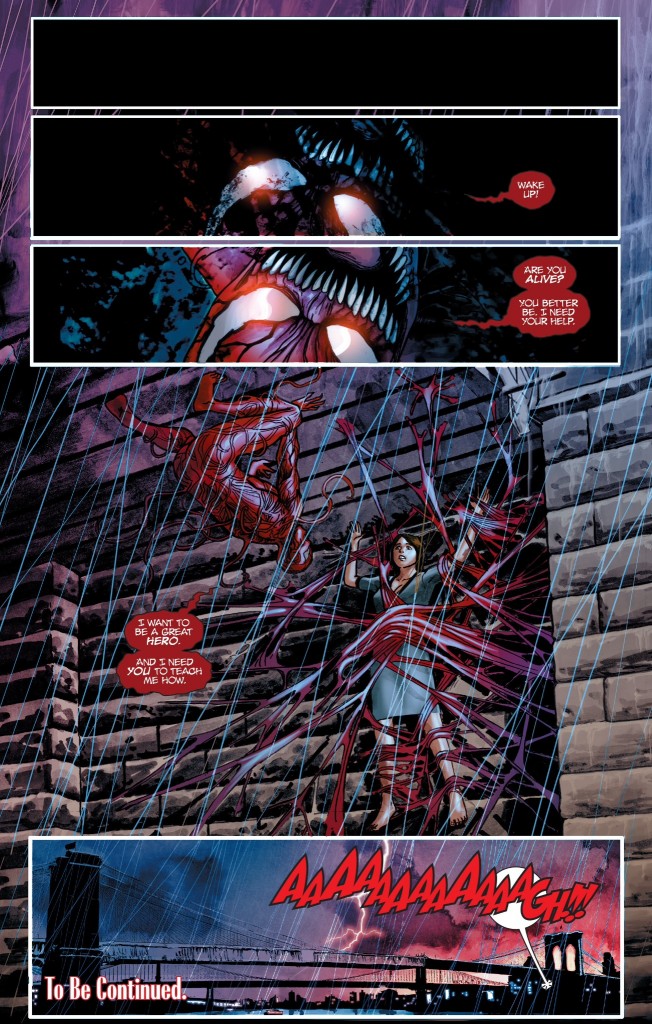 The script also does a wonderful job in how it goes about defining heroism and villainy/good and evil. While Carnage is trying to do the right thing, most of the characters he’s attempting to help appear to be innocents but are actually rotten at the core. This plot point is further emphasized by the inclusion of a new iteration of the 80s villain, the Sin-Eater – a character that first made a name for himself in the “Death of Jean DeWolff” arc by killing symbols of the law like the titular police captain and a New York City judge because he viewed them as being corrupt. This new Sin-Eater is targeting members of the media – a softball for a target these days if there ever was one – and while he is clearly a villain (and some level of a demon), a case could be made that his victims are people who probably had it coming one way or another.

That leaves us with the most unique of showdowns between two adversaries that might not be that far apart on the homicidal spectrum, and yet are also starkly different. When both are acting normal, Carnage is defined by how he kills indiscriminately (mainly for the fun of it), while the Sin-Eater, whether it’s the original or this new one, has a methodology in how he chooses his victims. 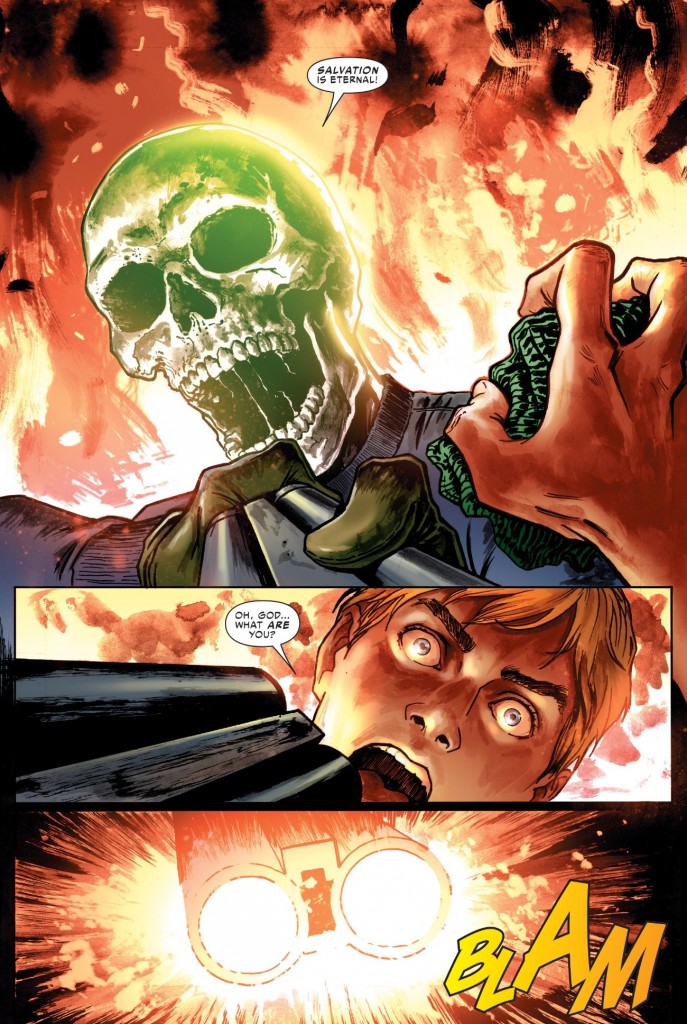 I’m sure as is often the case when it comes to Carnage stories, his usual status quo will be restored by the end of the series, but in the interim, I can see myself having a lot of fun reading and talking about this series. It might even top Shinick’s Hobgoblin opener in the fun department, which is saying a lot. Watching Carnage “break good” has the potential to be a total blast.